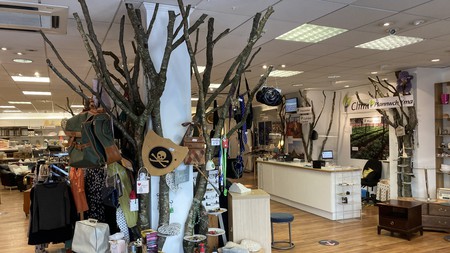 You might regularly pop to a local greengrocer, or get your pastas and cereals from a zero waste shop, but have you ever heard of an eco-friendly department store?

Residents in the charming seaside town of Aberystwyth, Midwest Wales, are well aware of this new phenomenon thanks to the recent opening of the Climate Shop.

The concept is pretty simple. Unwanted items from local customers are repurposed, resold and reused, rather than ending up in landfill. And as a non-profit organisation, they plant a tree in Kenya for every 20p spent.

What sets this eco-shop apart is that it’s a full blown department store with two floors and 10 departments covering 6,500sqft (604sqm). You can buy anything from clothes and books to electronics and furniture.

Which brings us onto the unique pricing of items in the Climate Shop. Rather than advertising prices in pounds, you’ll see items labeled in “trees planted”. So, if you buy an old clock for £1, that’s 5 trees planted in the shop’s currency.

The store is managed by Ru Hartwell, a forester who first started planting trees for environmental reasons in Wales in the 1990s. He says: “In the ’90s I was getting concerned about climate. I was ploughing quite a lonely furrow at the time. When I was talking about planting trees to offset carbon people would describe me as the climate nutter on the hill.” 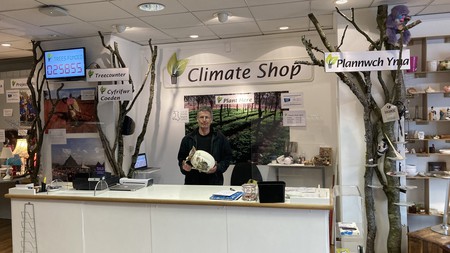 In 2006 he founded Treeflights Ltd, which initially planted locally until new research emerged suggesting that tropical forests do the best planetary cooling work. This is when Treeflights turned its focus towards Boré in Coast Province, Kenya, and in the years since have planted 2.4m trees, 125,000 of which were funded by sales in a smaller sister shop in Lampeter, which opened in April.

Mr Hartwell goes on to explain: “I started a project with Lampeter Rotary Club to collect second hand gear and used it to raise money for a clean water project in Kenya. People get fatigued if you just keep asking them for money. We’ve all got a cellar or an attic full of stuff that we’re not using, and that project worked well, we raised $45,000. I found that people were much more amenable to giving second hand goods because you’re actually solving a problem for them.

“Then during lockdown I started this project called the Climate Shop in Lampeter, using the same principle but using it to plant trees and absorb carbon. When the lockdown ended in mid-April we opened a shop in Lampeter and it was really well received. I think people deep down know that we have to change our ways, and the community really responded to that project. It’s a small place, hardly the centre of the universe, but it’s been funding 1,000 trees most days since it started.”

Then, on 18 September came the opening of a much larger shop in Aberystwyth, which has gone down just as well with the locals, raising £5,000 – or 25,000 trees – in just the first three days.

“What’s really nice is that whenever we sell something we say to the customer, thank you for planting 5 trees with us in Africa, and it almost always brings a smile to their face. I think deep down we do know that our consumerist ways are harmful to other life forms, so when they hear that they’re not harming the natural world with their purchase it lets them off the hook, they have a good feeling.”

The running costs of the shop are funded by grants and donations, meaning profits are almost completely used to plant the trees in Kenya. The Boré Green Umbrella co-operative, consisting of 2,500 members and partnered with 460 schools, manages the tree nurseries at a ground level. 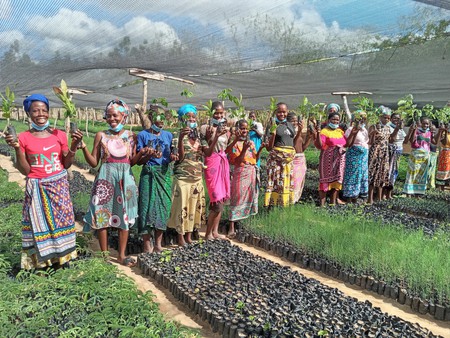 Over 60 women are employed to take care of the trees at tree nurseries in Boré, Kenya | | Courtesy of The Climate Shop

What this all means is that the Climate Shop is a carbon negative project. And it’s not just about planting trees to achieve that.

The new shop can be found on the Aberystwyth high street in buildings that used to house Burton and Dorothy Perkins. As typical British high street stores continue to die out, leaving empty shop fronts in towns across the country, this offers an opportunity for progressive, environmentally positive organisations to step in.

And it also reminds us of all the damage caused by consumer culture, fast fashion and buying new. While all those things are huge factors in the climate crisis, it’s easy to forget that as the consumers we can help stop the spiral by participating less and less in the self-destructive nature of the industry.

Mr Hartwell’s final message is a powerful one: “The awkward truth is that we’re shopping the planet to destruction. Any normal charity shop is doing a good job, but we’re taking the standard charity shop model and tweaking it to make it more nature positive. There’s a load of people trying different things in terms of upcycling and sustainable consumption, so I think it’s part of a general trend, but I definitely hope that people try to emulate us. I would like that.”

So, if you’re heading to West Wales, where the coastlines are calm and the towns have a strong independent business culture, then be sure to pop into the Climate Shop in Aberystwyth. Whether buying something yourself or offering up some unused goods, you can make a positive difference.

Read Culture Trip’s Commitment to Responsible Travel to discover more about what we do to encourage sustainably minded travel.