The Best Hotels to Book Near Horseshoe Falls, Llangollen 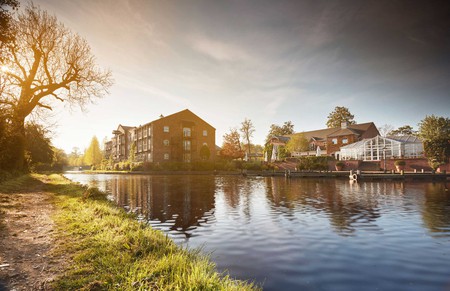 Along the River Dee in Llangollen, Denbighshire, you’ll find the lovely Horseshoe Falls. This winding weir, surrounded by attractive woodland, plays a key part in one of Wales’ most wonderful waterside walks.

On a river in the fringes of the Berwyn Mountains, Llangollen offers beauty that’s both natural and man-made: the Llangollen Canal and distinctive Horseshoe Falls played a key role in 19th-century British industry and make up a Unesco World Heritage site. Our choice of hotels nearby range from idyllic country retreats to Georgian townhouses, perfect for exploring the countryside of the Welsh and English borders. Book one now with Culture Trip. 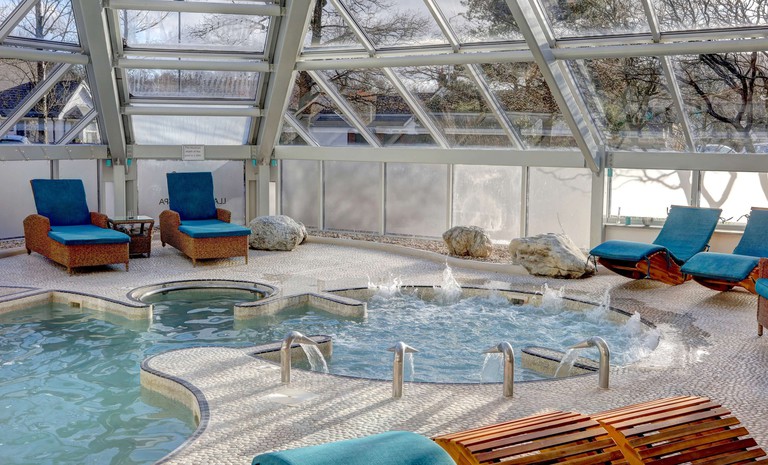 © Wild Pheasant Hotel & Spa / Expedia
As befits a hotel with such a bucolic name, the Wild Pheasant sits surrounded by nature on the banks of the River Dee in the town of Llangollen. The hotel is set in a traditional house and has cosy rooms to match, with the finest – the Dee Valley penthouse – boasting its very own hot tub on a balcony overlooking the woods. The well-lit Glasshouse restaurant serves artfully presented British dishes such as pan-fried salmon with asparagus and poached egg. 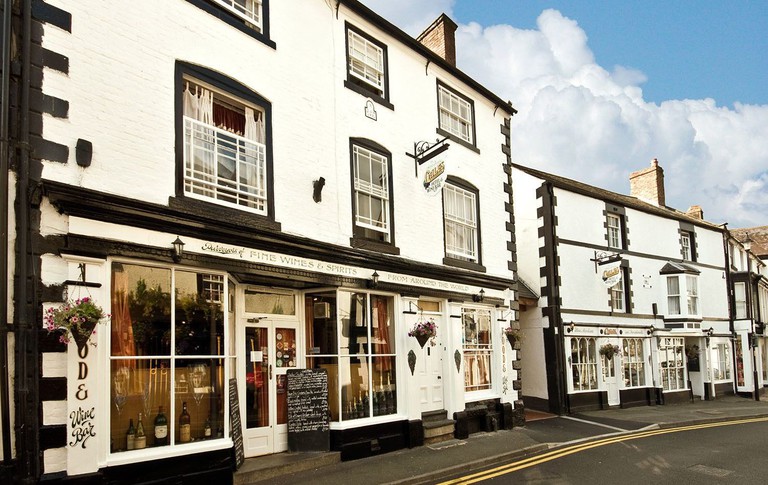 © Gales / Expedia
Lovers of wine and song are in the right place at Gales. This one-off hotel is set in a Georgian house, and the rooms reflect that heritage with their cast iron beds and antique wooden wardrobes. There’s a well-stocked wine bar serving fantastic food – try the spare ribs – and a programme of live music to ensure evenings go off with a bang. 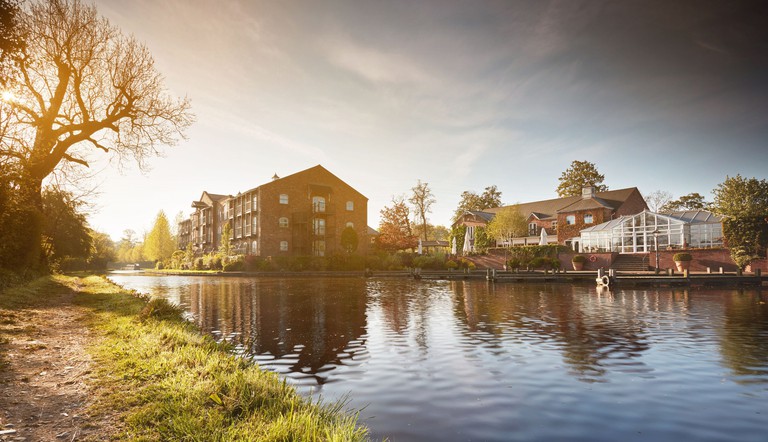 © Lion Quays Hotel & Spa / Expedia
Perched on a quay on the banks of the Llangollen Canal, this well-run hotel boasts a scenic location. Many rooms overlook the canal and the Shropshire countryside beyond, while within they have a contemporary style and modern features including Hypnos beds and underfloor bathroom heating. There’s a luxurious spa, and several dining options – particularly recommended are the cream teas at the Waterside restaurant.

A 17th-century coaching inn makes an atmospheric setting for this superb hotel, which has comfortable, modern guest rooms adorned with pastoral photography of the Mid Wales countryside. Downstairs, the restaurant and bar offer a refined take on pub cuisine, with locally reared produce used in superb dishes such as chargrilled pork chop with tarragon mash. The Royal Oak sits in the pleasant town of Welshpool, close to the majestic Powis Castle. 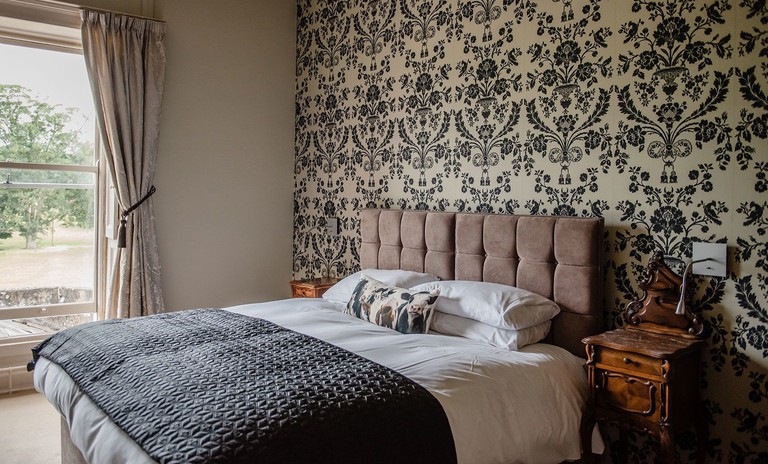 © Sweeney Hall / Expedia
A country house hotel in the Shropshire countryside, the Sweeney features cosy guest rooms and suites which combine a classic look with contemporary comfort. Antique wooden furniture and large beds join modern luxury features including whirlpool bathtubs. Matching the rooms in style and quality is the restaurant menu, with highlights including the lemon, basil and honey chicken. 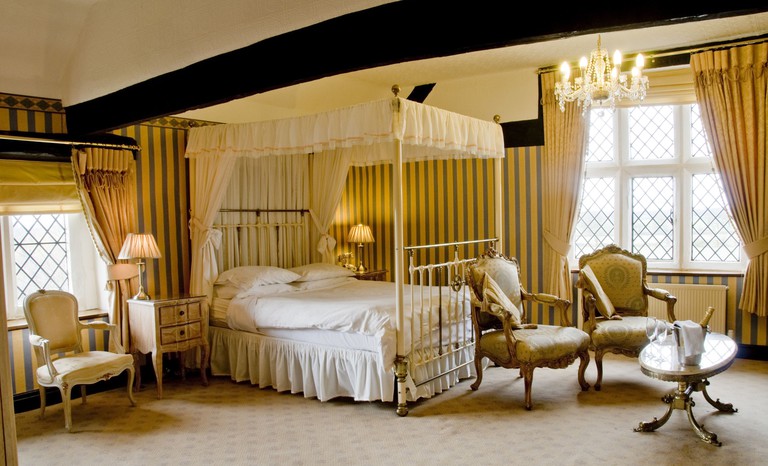 © Albright Hussey Manor / Expedia
With its half-beamed Tudor façade and surrounding moat, Hussey Manor is a postcard-perfect 16th-century house. It’s even mentioned in the Domesday Book. Though the rooms have been updated since then, classic features remain – you’ll note the carved wooden four-posters – and if you take the Hussey Suite, you’ll have a view of the garden and its resident black swans. An outdoor oven cooks up delicious pizzas there every evening, while the lavish Sunday roasts are a weekly spectacle.

The Hand at Llanarmon 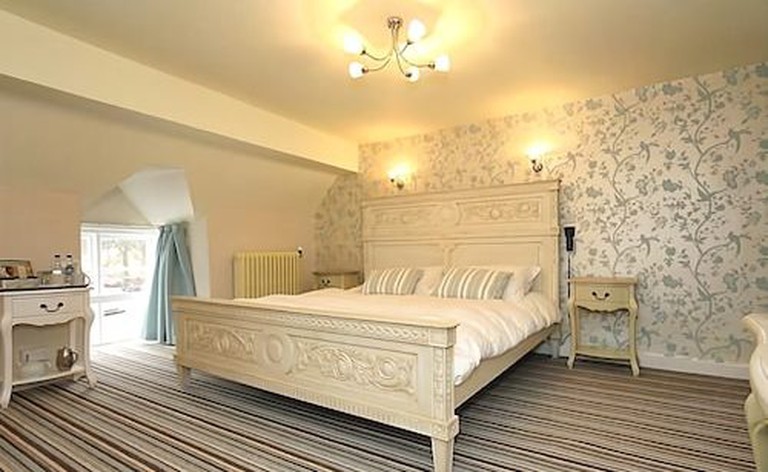 © The Hand at Llanarmon / Expedia
Welcoming weary wayfarers since the 16th century, the Hand’s traditionally styled guest rooms are set in a converted farmhouse. You’ll find it in the spectacular Ceiriog Valley, whose rolling hills make for some of the finest landscapes in Mid Wales – the on-site spa overlooks its gently burbling river. Head there for outdoor hot tubs, a sauna and steam room, and a range of massage treatments. 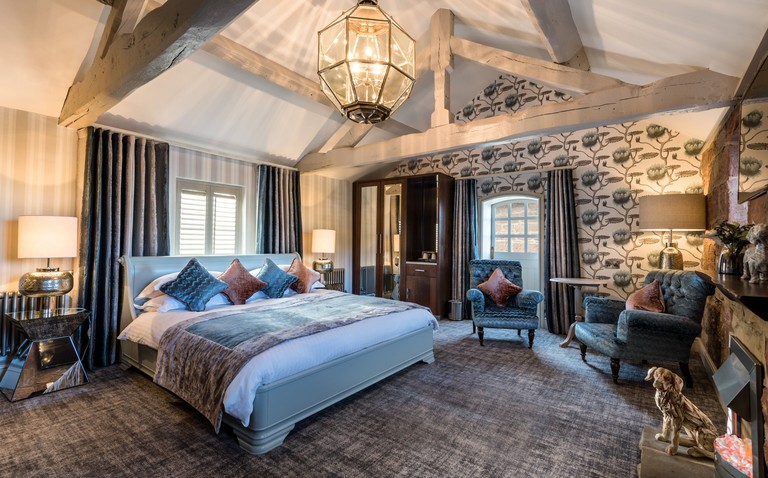 © The Pheasant Inn / Expedia
Ivy lines the red-brick walls and a suntrap terrace overlooks the scenic Cheshire Plain at this five-star country retreat. Rooms retain ceiling beams and exposed brick walls – reflecting the building’s 300-year heritage – but are updated to modern standards of hotel comfort. The food is justly acclaimed – top dishes include venison haunch with fig jam – and the location is perfect for taking long walks in the gorgeous Cheshire countryside.
Give us feedback