The Best Beaches in North Wales 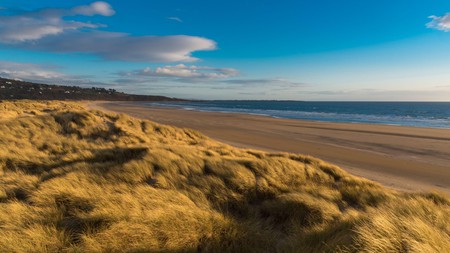 If you're after peace and quiet, you can't go wrong with a long walk down Harlech Beach on a sunny day | © Black Key Photography / Alamy Stock Photo

Whether you fancy exploring Llandudno West Shore near Anglesey or Porth Lago on the Llŷn Peninsula, the beaches in north Wales are among the most beautiful in the UK.

From vast swathes of golden sand, full of families enjoying the sunshine, to tiny secret hidden coves, there’s an enormous variety of beaches in north Wales. Even the rocky seashore has its own charm, home to seals sheltering underneath the dramatic craggy cliffs.

While summer is traditionally the best time to visit, don’t feel limited by the seasons. “Winter is my favourite time to explore the beaches around here,” says Claire Copeman, co-founder of Adventure Tours UK and co-curator of Culture Trip’s action-packed, five-day North Wales adventure. “They take on a wildness of their own. With no-one else around, you could be anywhere in the world.” You can even combine beach hunting with a trip to nearby Snowdonia National Park.

From the ever-popular Colwyn Bay beach to hidden gem Porth Padrig, Culture Trip have put together a rundown on north Wales’ finest beaches, no matter when you choose to visit. 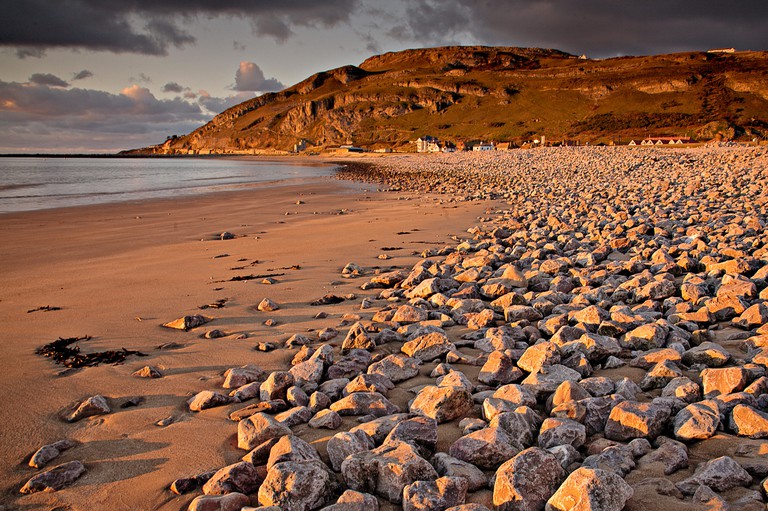 This beach faces out towards Conwy Bay underneath the limestone cliffs of Great Orme (the name comes from the Vikings and means “sea monster”). Much quieter than Llandudno’s North Shore Beach, its expansive, low-tide sands and shallow waters make it a popular spot for kite surfers; it’s also known for its colourful, prolonged sunsets. Just back from the sands, a cafe with views of Anglesey and Puffin Island serves comforting classics, such as fish and chips and fish finger sandwiches. 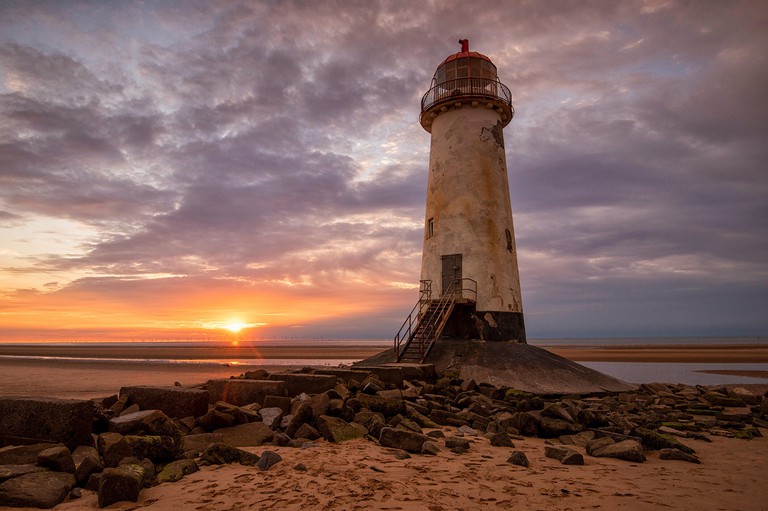 Talacre Beach is situated near the popular holiday town of Prestatyn, on the mouth of the River Dee estuary. Its focal point is a Grade Two listed lighthouse dating from 1776, which is said to be haunted by the ghost of its former keeper, who still watches over the unspoilt sands. The surrounding dunes are a Site of Special Scientific Interest (SSSI), containing rare species such as natterjack toads, and the estuary attracts terns, warblers, meadow pipits and skylarks.

Also known as Morfa Bychan after the nearest village, Black Rock Beach is a two-mile stretch of sand with rocky patches – although these aren’t actually black. Direct vehicular access makes it a top spot for picnic-goers, caravanners and water sports enthusiasts, who can drive all their gear directly up to the water. Its other attractions include unbroken views of Snowdonia National Park, as well as dozens of rockpools, sea caves and sand dunes. Porthmadog is a ten-minute drive away.

The vast sand-and-shingle Traeth Abermaw Beach is located in Barmouth, southern Snowdonia’s most popular resort. It sits next to the town’s quaint harbour, overlooking the sombre Barmouth Bridge. At low tide, you can walk all the way from here to Harlech Beach, located 11mi (17.7km) to the north. During summer, a land train runs alongside the beachfront promenade, where retro attractions such as donkey rides, amusement arcades and swing boats are on offer. A designated section is dog-friendly all year round. 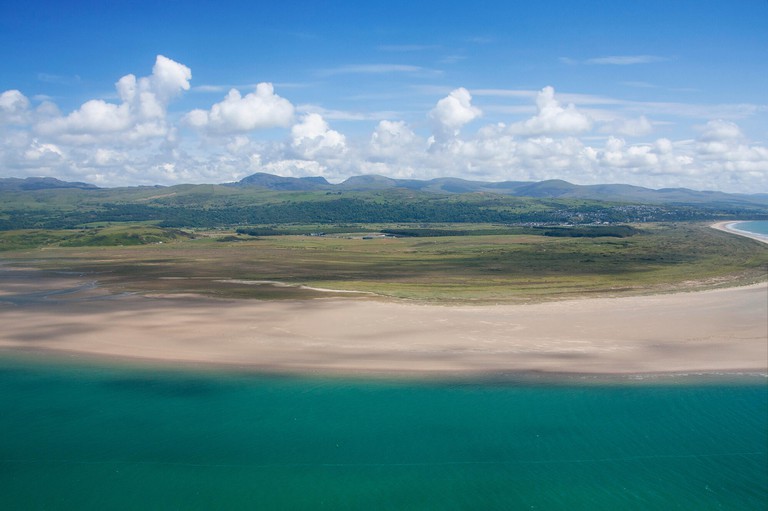 Harlech Beach consists of four miles (6.4km) of spotless sands on Snowdonia’s Atlantic coast. When you’re not gazing soulfully out to sea, explore the Morfa Harlech National Nature Reserve – the country’s only growing dune system – or visit the Harlech Castle, built by Edward I during his invasion of Wales in the late 13th-century. Harlech Beach also hosts migrating leatherback turtles during summer and backs onto the Royal St David’s Golf Club, one of the UK’s top courses. Nearby facilities include a shop, cafe, toilets and parking. 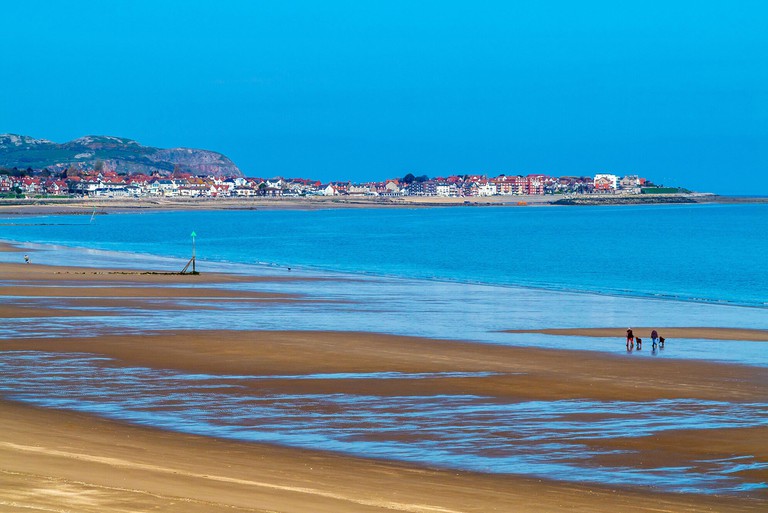 This iconic Victorian resort has rebooted itself in recent years, chiefly through the addition of the waterfront Porth Eirias entertainment complex. As well as kids’ facilities and event spaces, this multi million-pound development houses a watersports academy offering classes in jet-skiing, kayaking, sailing and windsurfing. Also boosting Conway Bay back to the top is Bryn Williams’ bistro Porth Eirias; this seafood restaurant has been awarded Bib Gourmand status by Michelin, meaning the food is superb but won’t break your wallet.

There are two beaches in Pwllheli, the unofficial capital of north Wales’ Llŷn Peninsula. Traeth Marian-y-de Beach – also referred to as South Beach or Pwllheli Beach – consists mainly of shingles and runs parallel to the promenade as far as Gimblet Rock. The sandy, dune-backed Glan y Don Beach begins north of the harbour and stretches for three miles to the Penychain Headland. Both are close to the bars, shops and restaurants of Pwllheli and are popular for fishing and watersports. 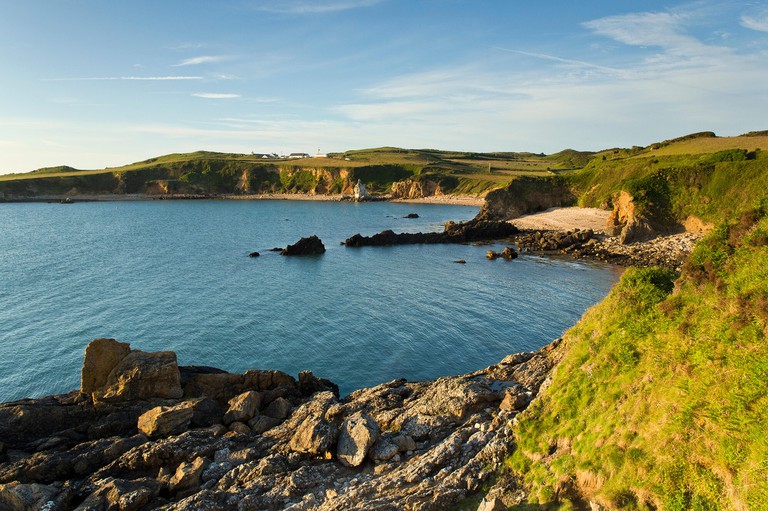 If you like your beaches secluded and remote, Porth Padrig is unimprovable. Located a twenty-minute walk from the village of Llanbadrig, on Anglesey’s northern coast, it’s a compact curve of sand and rock. In the centre of the beach, there’s a white quartzite sea stack, known as the “White Lady”, in honour of a phantom from Celtic folklore (hence why it’s also known as White Lady Bay). Dogs are allowed all year round and there are plenty of rockpools to explore, as well as a coastal walking path running along the cliffs above.

Situated on Llŷn Peninsula’s eastern coast, Abersoch Beach looks out towards the Tudwal Islands and, beyond them, the peaks of Snowdonia National Park. Southwesterly winds draw windsurfers and sailors, whilst the sheltered, current-free waters are suitable for swimmers of all abilities, especially as there’s a motor boat exclusion zone. The best time to visit is summer, when you can attend live music festivals and participate in Abersoch’s annual regatta. All the village’s amenities are within a ten-minute walk from the beach. 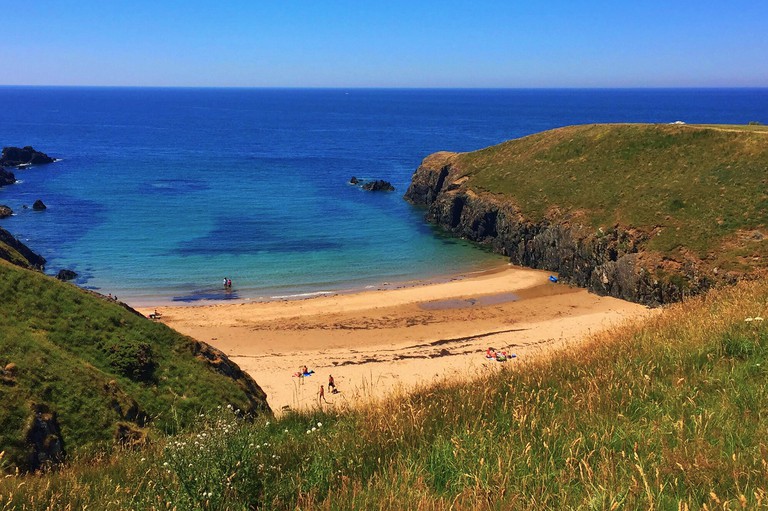 Clearly the work of a giant, rectangular cookie-cutter, Porth Lago cove is found on the Llŷn Peninsula’s western shoreline, sandwiched between the Dinas and Graig Ddu headlands. Take to its Mediterranean-blue waters for an invigorating swim, or stake out a position on the rocks and cast your line for bass. Access is either via a track leading through private farmland to a car park, or from the Wales Coast Path by way of a steep detour down the dunes. There’s no lifeguard, so take care when swimming.

Want to discover the wilds of North Wales with an experienced guide at your side? Join our five-day trip from the peaks of Snowdonia to the shores of Anglesey, led by our local insider.