Perched on the border between England and Wales, Hay-On-Wye is a literary enthusiast’s paradise with an estimated 30+ bookstores. We’ve put together a list of the top 10.

The Children’s Bookshop in Hay-On-Wye is wonderfully and exactly as advertised – a colourful assortment of literature written and designed exclusively for children. Allowances are made, of course, for the young at heart. For avid collectors aiming to expand their own stock and range, the Children’s Bookshop provides a comprehensive selection of annuals covering most key areas, such as ‘Girl’s/Boy’s school, W E Johns, R Crompton and D C Thompson’. Even for casual browsers, one of the first editions of the extremely rare, early Rupert Bear annuals make for a much treasured gift or keepsake. With intimate floor-to-ceiling nooks filled with colourful volumes, the Children’s Bookshop is the ideal spot to inspire a young reader or to hark back to halcyon days.

Boz Books, a small but select second-hand bookshop established in 1989, caters for a wide variety of literary tastes. It specialises particularly in the literature of the 19th century. Featuring, as the name implies, a selection of stunning Charles Dickens first editions alongside the seminal texts of George Eliot, Anthony Trollope and Rider Haggard, to name but a few, Boz Books is a haven for Victorian enthusiasts. This small store also houses an impressive selection of 20th-century literature, with a penchant for Dylan Thomas.

As the longest established bookshop in Hay-On-Wye (1965), the Hay Cinema Bookshop is seminal viewing for any literary pilgrimage. Set in an evocative, restored cinema space, the shelves have an impressive 200,000 volumes ranging from art to zoology, in an assorted literary labyrinth. Whether you are looking for your next page-turner or a wall of 19th-century bindings for decoration or filming, the Hay Cinema bookshop has an abundance on offer. Also worthy of a visit is their sister store in London, once dubbed ‘everything a second hand bookshop should be’.

Situated on the top floor of the Hay Cinema is Francis Edwards, four show-rooms displaying the best antiquarian editions of art history, architecture and travel volumes, among others. Established in 1855 in London’s West End, Francis Edwards now has a firm place in the ‘Town of Books’ and is extremely well-frequented. 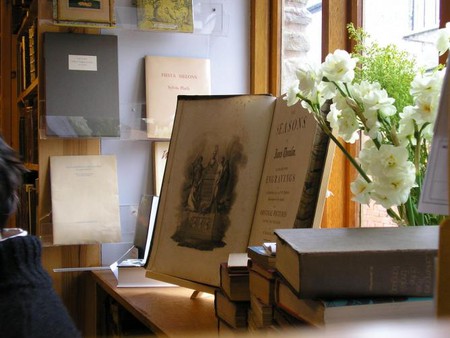 The Poetry Bookshop remains the only second-hand bookshop exclusively dedicated to poetry in the United Kingdom, housing everything from rare volumes to popular modern poetry behind its attractive, stone-clad shop-front. The Poetry Bookshop addresses a range of poetic needs, stocking antiquarian items for collection and scholarly works alike.

Named after and established by the self-professed ‘King of Hay’, Richard Booth’s Bookshop is a delightful cave of literary spoils. Brimming solid-wood shelves are lit by streams of natural light from the skylights in the angled ceiling, creating an atmosphere conducive to contemplation of the material on offer. There is also comfortable seating scattered throughout the bookshop to allow for proper perusal of the texts, which themselves range from rarities to the contemporary. In addition to the bookshop, the building also houses a small art-house cinema and a popular cafe. This makes it capable of providing a full afternoon’s activity if desired.

Addyman’s Books began life in a 10-foot square room in 1987, the pursuit of passionate founders Derek Addyman and Anne Brichto. It has been expanding ever since, finding a permanent home at its current two-storey premises at Lion Street. Divided into three separate shops, the Addyman ‘triumvirate’ caters to different tastes in each venue. The Addyman Annexe, for example, has a stunning traditional shop-front that somewhat belies the self-professed ‘sexier’ material lying just on the other side of the door. It contains an array of content from works on sex, art and philosophy to the occasional occult item.

The Hay on Wye Booksellers has arguably the most iconic shop-front in Hay-On-Wye. With its attractive black and white, 15th-century panelling and traditional swinging sign, it is often the image used to portray the town as a whole. Stocking bestsellers together with beautiful, rarely seen and hard-to-find treasures, The Hay on Wye booksellers is a generous space with a traditional atmosphere and regularly updated literary selection.

Murder and Mayhem, joining the Addyman group in 1997, is dedicated entirely, as the name suggests, to the buying and selling of crime, horror and detective fiction. Scores of green Penguin paperbacks sit among the ghoulish and fiendishly decorated interior. This provides a literary browsing experience that is both timeless and wonderfully in-tune with the resurgence of interest in Sherlock Holmes. One can expect everything from modern tales of murder to the original, frightening tales of Poe – heaven for detective and horror enthusiasts.

Arden Booksellers is something out of the ordinary: a bookshop specialising only in works pertaining to natural history, zoology, entomology, ornithology, gardening, botany, bees and beekeeping. It is a fascinating and appointment-only collection that sources out-of-print works as well as seminal current texts on its particular areas of focus. Family-run with a true sense of integrity and passion, Arden booksellers prides itself on a loyal customer base and real dedication to sourcing the finest works of their kind available. 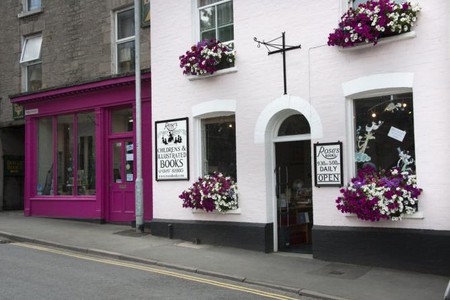 Rose’s Books is a stunning compendium of children’s literature in Hay-On-Wye. Set behind a delicately pink and floral shop-front, Rose’s Books stocks in excess of 20,000 children’s and illustrated volumes within a light oak interior. Like its sister shop in Tintern, Monmouthshire, Rose’s stocks mostly rare and out-of-print editions, making it a must-visit for collectors whether they’re in search of annuals from the 1920s or Victorian illustrated hardbacks.