20 Welsh Colloquialisms You Should Know 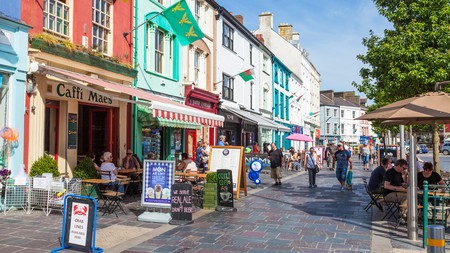 From Richard Burton to Gavin and Stacey, the poetic lilt of English spoken with a Welsh accent is famous around the world. But Welsh is its own language, too – and our little Welsh slang dictionary will set you in good stead if you’re planning a trip to Cymru bach.

Visit Wales and you might find yourself grappling with a few words and phrases you’re not familiar with. Some are English, some are native Welsh – and almost all are guaranteed to leave non-locals slightly dumbfounded. To save you the confusion and possible embarrassment, we’ve collated some of the most important, unusual or simply endearing Welsh colloquialisms, so get your mouth around our helpful pronunciation tips and you’ll be lingo-ing with the locals before you know it.

Cwtch – Pronounced “kutch”, to rhyme with butch. Translated most directly as “safe place”, it’s the Welsh equivalent of a cuddle, although it is, of course, better

Ych a fi – Pronounced “uh-ch ah vee”. A phrase used to allude to something rude or disgusting – literally, “yuck”

Mush – A term of endearment often used by people from Swansea, pronounced to rhyme with push

Mitching – Bunking off. The Welsh equivalent of playing truant from school

Lush – An adjective of delight describing something very, very nice (abbreviated from luscious)

Chopsing – Getting mouthy. When someone is arguing or giving you an earful, for example, “The player was chopsing the referee.”

Tamping – A word used to describe your rage at something frustrating. “He was absolutely tamping when the hospital cancelled his appointment at the last minute.”

Dwt/Dwtty – Pronounced “dut” / “dutty”, to rhyme with foot / footie. Someone who is cute, sweet and diminutive

Alright or wha? – An introductory term used to mean “hello”

Like – A filler word that will be inserted into sentences at any point. It’ll still make sense to Welsh people

Iechyd da – Pronounced “yeah-ch-id dah”. The direct translation from Welsh is “good health” and this is generally used when toasting with a drink in hand – essentially, it means “cheers”

Cymru am byth – Pronounced “come-ree am-bith”. Frequently uttered whenever sport comes into the equation. It translates as “Wales Forever” or “Long Live Wales”. It will often be heard on international rugby days

What’s occurrin’? – An iconic greeting catchphrase by Ruth Jones’ character Nessa, in Gavin and Stacey, which has become part of the lexicon for fans of the show

Drive – In other countries it’s a verb meaning to operate the direction of a motor vehicle. In Wales, it’s what you call your bus driver. When travelling by bus in Wales, be sure to say “cheers drive” as you leave the vehicle