Wonderful Experiences That Will Make Your First Trip to Scotland Unforgettable 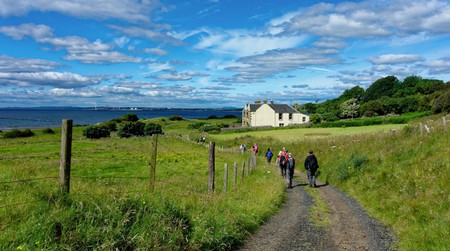 Welcome to Scotland. Whatever’s drawn you here – be it heritage, whisky or the Harry Potter fandom – you’ll have an unforgettable trip.

The beauty of Scotland’s scenery and richness of its culture is matched only by the friendliness of the people. With so much on offer, it’s hard to narrow it down – but whatever you do, try not to squeeze in too much. Scotland is bigger than it looks, and you’ll enjoy it more if you travel deeper, not farther. Here’s how to get the most out of your trip.

Here’s a local tip: the best view in Edinburgh isn’t from the castle, nor is it from Calton Hill. It’s actually from the Scott Monument, the spectacular gothic spike that greets visitors as they step out of Waverley Station. Having a 200ft (60m) tall monument to poet Sir Walter may seem like a quirk of town planning, but Edinburgh takes its literary greats very seriously. Bookworms will revel in the collection of curios at The Writers’ Museum, which celebrates Scott alongside The Strange Case of Dr Jekyll and Mr Hyde author Robert Louis Stevenson and national bard Robert Burns, whose birthday is marked with haggis dinners up and down the country. 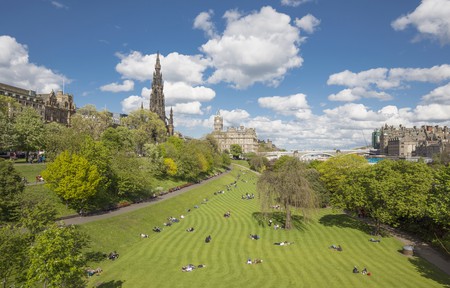 However, one name stands above all in international renown: JK Rowling. The Harry Potter author wrote in the Elephant House Cafe – now tragically closed due to a fire – and in a suite of the Balmoral hotel on Princes Street, now called the JK Rowling suite. Wander down to Greyfriars Kirkyard, one of the oldest cemeteries in Edinburgh. Rowling used names from the gravestones here for her characters – including one Tom Riddle, aka Lord Voldemort. Round off your tour with a Wizard Afternoon Tea or potion-making session at The Cauldron.

Walk, cycle and eat your way along the Fife Coastal Path

The Fife Coastal Path links two bridges – the Tay Bridge and the Kincardine Bridge. Between them is 116mi (187km) of cragged coastline, spectacular seafood and opportunities for bird-spotting. You’ll also pass through the postcard-perfect university town of St Andrews: this is where golf was born, and where Prince William met a certain Catherine Middleton. Further down the road is the Kingsbarns Distillery, one of a raft of new Lowland whisky distilleries. 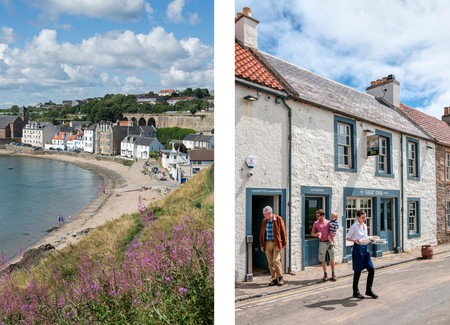 One of the most picturesque sections of the path starts in Elie and ends in Crail, taking in pastel fishing villages, ruined castles and pebble beaches. Don’t miss boat-fresh lobster from the Ship Inn in Elie, or smoked salmon from the East Pier Smokehouse in Anstruther. Catch a boat from Anstruther to the Isle of May to see hundreds of nesting seabirds, including puffins and guillemots. If you’re really lucky, you may spot a dolphin or whale.

Scotland has no shortage of distillery-hopping destinations – but for sheer atmosphere, Islay is hard to beat. This tiny Hebridean island is home to nine distilleries – roughly one for every 350 inhabitants. The single malts produced here are heavily peated, which means the barley is dried over burning peat. Drinking an Islay scotch is like drinking a fireplace – you’re bound to impress your friends if you bring a couple of bottles home. 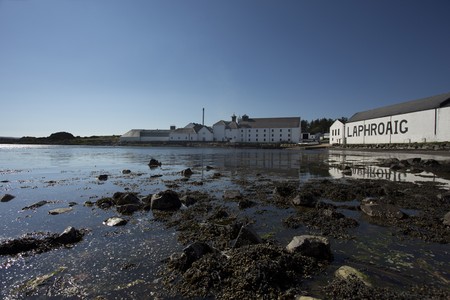 The little island of Islay is home to nine distilleries, including Laphroaig | © VisitScotland / Paul Tomkins

You’ll need a few days to try everything, but if you’re short on time, park the car in Port Ellen – there are three distilleries within walking distance. Laphroaig, Lagavulin and Ardbeg all have visitor centres that let you tour the distillery, read up on Islay history and taste a few drams. Some tastings even come with chocolate pairings.

Scotland is the darling of Hollywood directors – but there’s nothing like seeing it in real life. Eilean Donan Castle, just east of Skye, is perhaps the best-known Scottish film location – jutting out into Loch Duich, it’s been the setting for The World Is Not Enough (1999) and Highlander (1986). Skye itself has seen its share of film crews – for Prometheus (2012), The Wicker Man (1973) and Macbeth (2015). 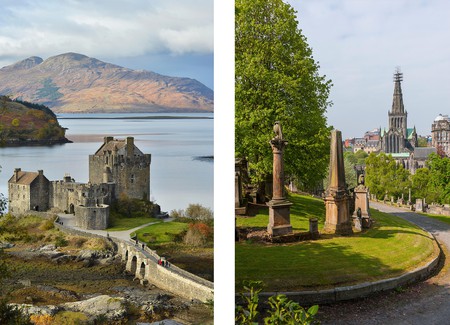 Central Scotland is another popular destination for film lovers: Doune Castle, near Stirling, appeared in Monty Python and the Holy Grail (1975), where John Cleese mocked the “English pig-dogs” who trespassed upon his land. Appropriately, the audio tour of the castle is narrated by former Python Terry Jones. The TV series Outlander (2014-) also features Doune Castle, along with Loch Katrine and Deanston Distillery.

If you like your movies (and your travel) on the grittier side, head to Glasgow, the largest city in Scotland, which often doubles as post-apocalyptic New York. Scenes for The Batman (2022) were filmed at the Glasgow Necropolis; the city also features heavily in 1917 (2019), World War Z (2013), and TV series Succession (2018).

Start planning your own trip to Scotland at visitscotland.com