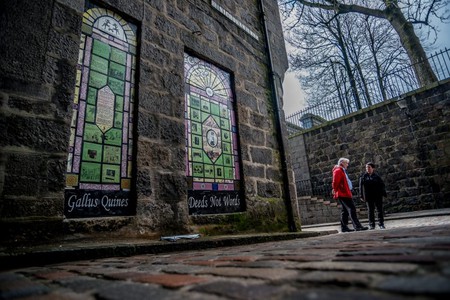 Change starts with people. Ordinary people with extraordinary ideas – and the unflinching determination to challenge entrenched precedents surrounding equality and other pressing social issues. Aberdeen’s burgeoning street art scene has provided a voice for the incredible women, today and throughout history, dedicated to advancing human rights for all. Artist Carrie Reichardt collaborated with Amnesty International and Nuart Aberdeen to honour these pioneering female human rights defenders with a series of powerful ceramic murals.

Graced with an uncanny astuteness that translates across all her projects (including her home which she transformed into a giant mural), Reichardt is a technician of action through her highly-politicised artworks, and mastery of muralism, mosaic and screen-printing. 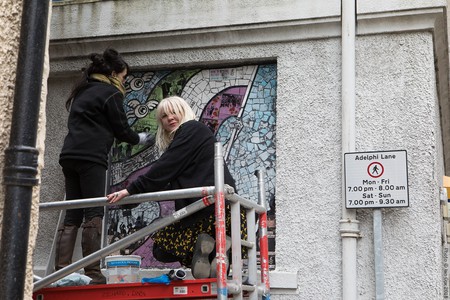 ‘Suffragette’ Spirit’ is a permanent public art piece that rejoices the empowering women across Scotland nominated for Amnesty International’s ‘Suffragette Spirit’ campaign, a project in support of the UK’s women human rights defenders. As part of the global ‘Brave’ initiative, the campaign is dedicated to protecting the world-wide tribe of human rights activists and organisations, while exposing the extreme dangers, trials and tribulations they are forced to endure.

In Carrie’s words, “To celebrate 100 years of women getting the vote, I thought it would be great to make this piece to celebrate the ‘Suffragette Spirit’ that still lives on in Aberdeen. I hope it will be a fitting honour to all those ordinary women who have done extraordinary things to advance human rights for all.” 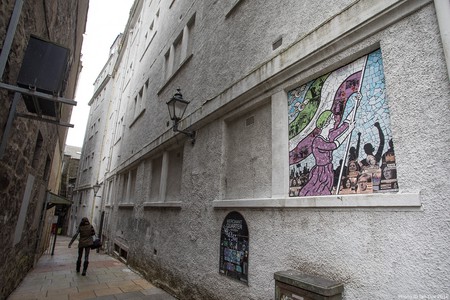 This highly-detailed work is riddled with classic revolutionary imagery and pops of green, white and purple – the suffragette colours. Not a thought is missed by Reichardt, who cleverly included images of human rights protestors accompanied with a range of facts and pictures.

Amnesty International’s Scotland Programme Director Naomi McAuliffe said, “We are delighted that such an acclaimed and talented artist as Carrie Reichardt will honour the Scottish Suffragette Spirit nominees in her artwork.” She went on to stress the “unique power of art to unite people, inspire activism and promote human rights change.” 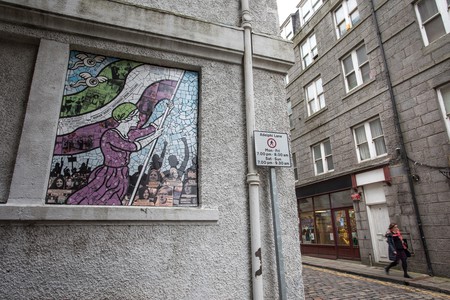 Inspired by the granite city’s mesmerising cluster of stained-glass windows, ‘We are Witches’ and ‘Trailblazing Women of Aberdeen’ pay tribute to the women fighting for equal rights in contemporary society, as well as the many suffragettes and women throughout Aberdeen’s history who fought back and pushed against the sociopolitical status quo. 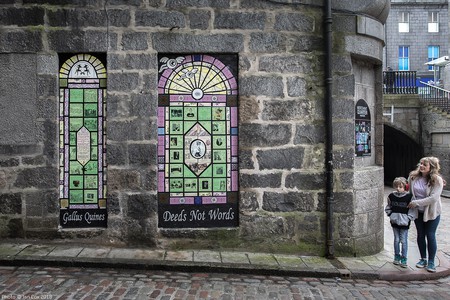 Both pieces embody the suffragette spirit (especially during the 100th anniversary of women gaining the right to vote) and remember the inspirational female figures who featured throughout Aberdeen’s colourful history and played a prominent role in the city’s rich cultural heritage.

Amal Azzudin, one of the human rights defenders chosen by Reichardt who embodies the suffragette spirit, responded with: “I am a huge supporter of Amnesty International’s work so this means a lot to me. I stand in solidarity with all the women in the world fighting for a better world and the 100 women on hunger strike who are currently in detention in Yarl’s Wood Immigration Removal Centre.” 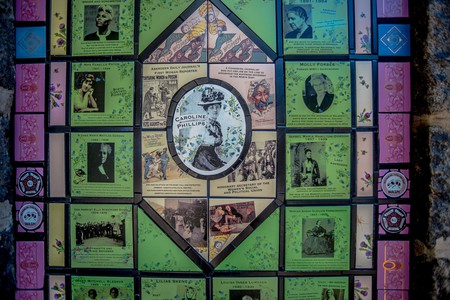 While in Aberdeen, Reichardt also orchestrated a workshop for Aberdonian young people to collaborate and create a new community mural that acknowledges and commemorates local unsung heroes. Located in the city centre, ‘Everyday Heroes’ features a bundle of ceramic plaques designed, cut and installed by the participants under the artist’s mentorship. 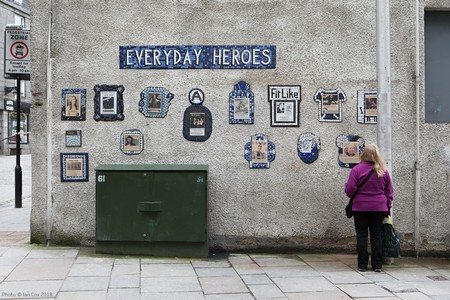 Included are a doctor and the first female to negotiate on the development of the NHS on behalf of the British Medical Association and an inspirational headteacher who sadly died from cancer. Space awaits on the ever-evolving mural for more nominees to be added over time.

Nuart Aberdeen, run by the same brains behind the famous Nuart Festival in Aberdeen’s partner city of Stavanger, Norway, is a brand new platform for local and international street artists to spotlight their work via site-specific murals, installations, interventions and temporary exhibitions. Nuart founder Martyn Reed said that “to be able to bring Carrie and Amnesty together under a Nuart platform to shine a light on female suffrage is a powerful thing.” 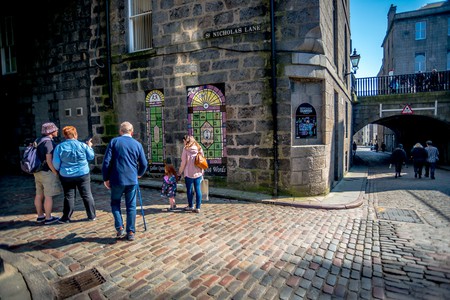