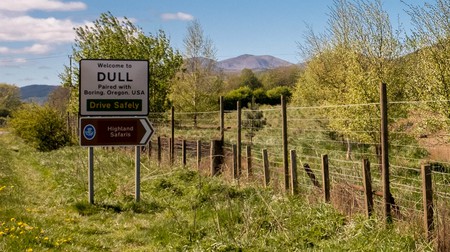 Big news for Scotland this week in what can only be described as a meeting of the mundane. The Scottish town of Dull is set to celebrate its hum-drum name with its twinned towns of Boring and Bland.

The festivities are to take place in Perth and Kinross and will revolve around the bond between this Trinity of Tedium. Yawing yet? Crowned the ‘League of Extraordinary Communities’, this trying trio are now joined at the hip, due to their mediocre names.

It all started when Dull and Boring formed a bond — thanks to a discerning cycling Scot on holiday in Oregon 5542 miles away, who happened to peddle through Boring. And so, a seed was planted and the wheels started turning. Before long, the two towns were twinned.

Due to Dull’s tiny size — think one lone street tucked away on the River Tay valley and no more than 100 residents — the towns haven’t met official twin status. Their connection is rooted much deeper, with a firm nod towards the humourous aspect and promoting tourism. 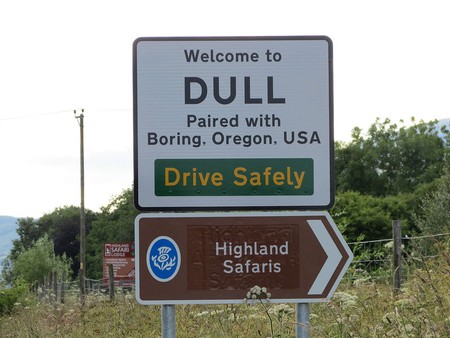 Meanwhile in New South Wales, the Mayor of Bland Shire, Neil Pokoney, caught wind of the hilarity and jumped right on the boring bandwagon to form the Trinity of Tedium. Pokoney told The Scotsman: ‘Dull and Boring basically have a tourism relationship. We heard about it and thought it would be even better if it became Bland, Dull and Boring’.

The upcoming Dull party will entail a civic reception of unprecedented proportions held in Aberfeldy: ‘It will be great to meet up with the Mayor from Bland, show him the area and build up the good relationship we have with his home town. The partnership has done wonders for our small community. We are always meeting visitors who have heard about it and wanted to see the place for themselves’, Iomhar Fletcher, the chairman of Dull and Weem Community Council, told The Scotsman. 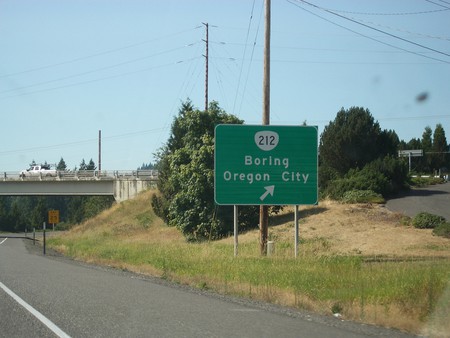 A deep-rooted cultural trait, the Scots have this knack for making light of the dark, the drab and the ugly. This partnership is a fine testament to the incorrigible Scottish sense of humour, with the improved tourism rates doubling up as collateral beauty.

Despite the celebratory nature of this week’s shindig, members of the League of Extraordinary Communities should brace themselves for the inevitability of the party’s conversations turning from Dull to Boring to Bland.