These Scottish Bothies Are the Perfect Off-Grid Paradise 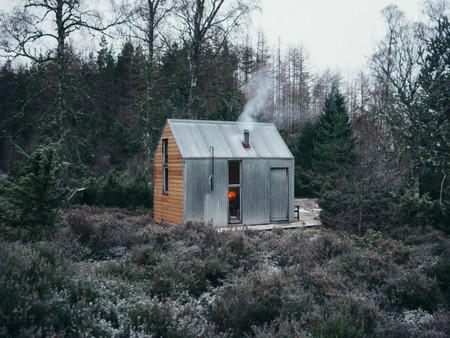 Camouflaged amid Scotland’s trackless terrains are a handful of bespoke bothies built especially for artists. These tiny huts are the work of the Bothy Project, an evolving network of off-grid art residency spaces crafted by hand from sustainable materials. The bothies in question invite artists, makers and creators to form a bond with the encompassing landscape, people and history.

A bothy is a Scots term for an abandoned cottage, croft or farmstead – a form of shelter – used by adventurers and outdoor enthusiasts as free accommodation when out exploring Scotland’s untamed wilderness. These shacks lack any creature comforts like running water or electricity, yet they ooze character. Each dilapidated wall reveals a snippet of history. Once more, these mountain huts do not exist on any map. 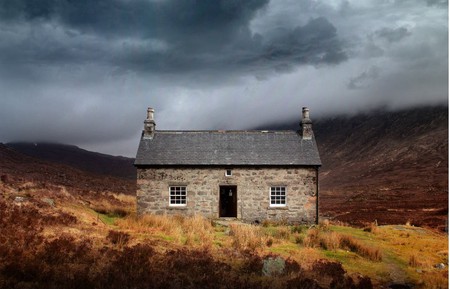 Inspired by these remote but and bens, the Bothy Project created a contemporary take on the classic bothy concept, by designing an unimposing space that can easily slot into any terrain and in which artists and researchers can work their magic free from any of the digital pressures inextricably linked with society today. 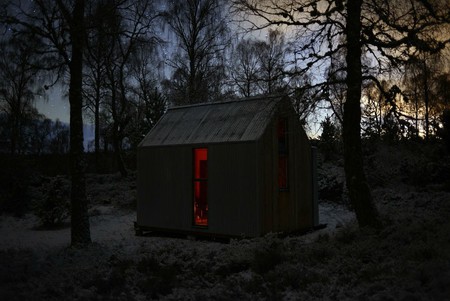 The project began in 2011 when artist Bobby Niven and architect Iain MacLeod joined forces and crafted their first bothy, thanks to the support from an RSA residency. The result was Inshriach Bothy, which was partly fabricated at Edinburgh Sculpture Workshop before the journey to its final home at Inshriach Estate in the Cairngorms National Park. 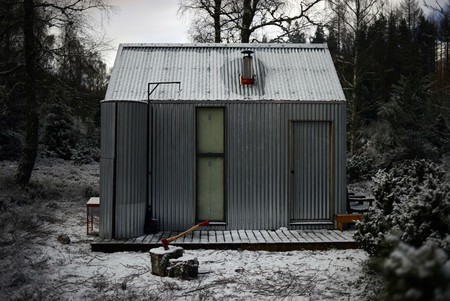 Situated in a picture-perfect woodland setting, Inshriach Bothy is a small shelter comprised of simple, sustainable materials where more complex alternatives usually prevail. This single-room space features a library, desk, kitchenette and even a mezzanine double bed. The bothy is fitted to withstand the temperamental Scottish weather; therefore, it is insulated with sheep’s wool and heated via a wood-burning stove. 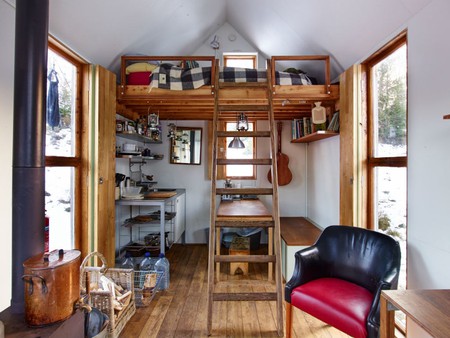 The artful design mimics both the archetypal child’s image of a house and the Scottish vernacular architecture that peppers Scotland’s far-removed parts. Solar panels provide a source of light, a phone charger, radio and torch, while the great outdoors plays host to a composting toilet and stove-heated suspended bag shower. What more could an artist need? 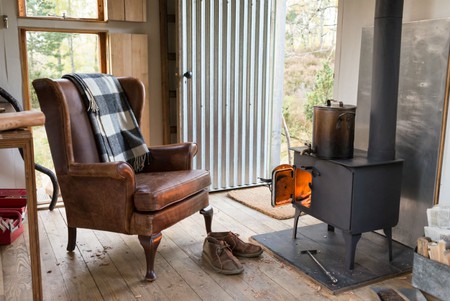 A sight to behold, Sweeney’s Bothy is hugged by the most spectacular rugged terrain on the Isle of Eigg, a place connected with legends of giant warrior women and Britain’s most eco-friendly island. This striking mono-pitched shelter, built in 2013, was designed in collaboration with artist Alec Finlay who sought inspiration from the tale of Sweeney or Shuibhne, a 7th-century Gaelic king plagued by a most sinister curse. 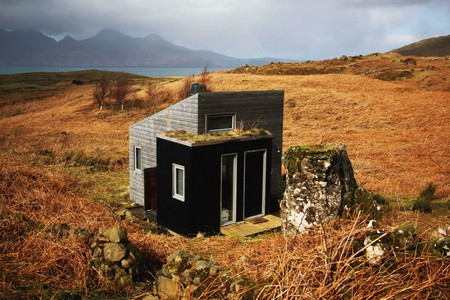 The story goes that Sweeney was left alone in the wild for years where he slept ‘on the top of a tall ivy-grown hawthorn in the glen’ (Flann O’Brien, At Swim, Two Birds). The poetry entwined with this legend is woven throughout Sweeney’s Bothy from the thorn-shaped bed support to the wild sense of solitude surrounding the space. Inside awaits a wood-burning stove, desk, two-person bunk and glorious floor-to-ceiling windows suited to contemplative views. 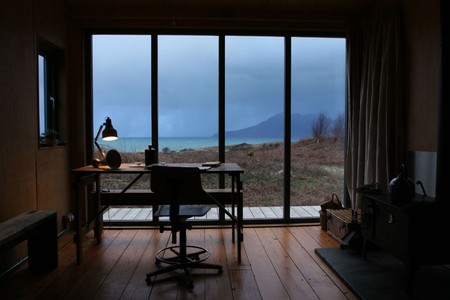 Sweeney’s Bothy is part of a contemporary movement coined by Finlay as ‘hutopian’, where artists craft ‘viewing platforms’ in Scottish wildernesses to serve as ecological, technological, architectural and social models. Numerous creatives have passed through this hut, including Scottish artist Ellis O’Connor. 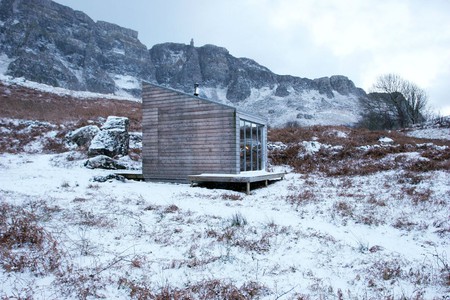 Another Bothy Project masterpiece basks outside Edinburgh’s Scottish National Gallery of Modern Art. Pig Rock Bothy uses an uncomplicated vernacular form sculpted in the image of Assynt, a pocket of Scotland praised for its brooding mountains and fiercely wild landscape. The luminous nighttime glow owes credit to the polycarbonate skin.

This unique space welcomes copious workshops, events, exhibitions and brief residencies. Inside are a collection of textiles and ceramics by Glasgow artist Laura Aldridge, who also named the bothy after discovering a pink and grey lichen-dotted rock around Assynt that reminded her of a pig’s skin. 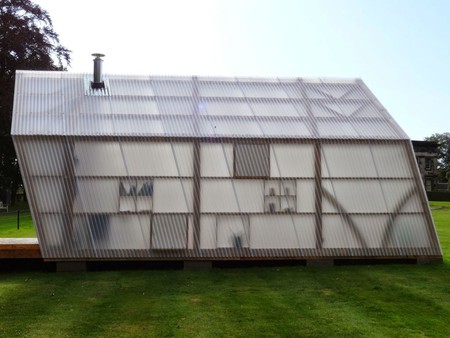 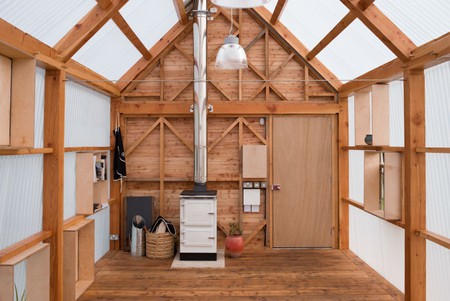 Since Inshriach Bothy first descended upon the Cairngorms, countless artists, researchers and creators have sought sanctuary, solace and inspiration in these contemporary artisanal shelters, which in themselves act as a catalyst for the instigation and exchange of ideas.

In what can only be described as pure bothy alchemy, the Bothy Project’s latest endeavour just made these architectural wonders available to a much wider audience. Described as ‘an evolution of the Bothy Project’s mission to enable artists and researchers to explore the history, landscape and people of the areas surrounding its bespoke shelters’, the ‘Artist Bothy’ is a commercially available prefabricated bothy suited to all off-grid odysseys. 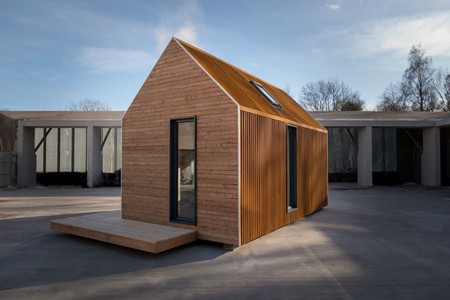 This high-spec hut, which starts at £39,000, is made in Scotland from sustainable materials and can be installed anywhere and everywhere in a matter of minutes. As a ‘low-impact contemporary cabin firmly rooted in the traditions of rural living’, the Artist Bothy is an invitation to embrace nature and the paths less travelled. Sales pour straight back into the Bothy Project to help nurture more artistic residency opportunities. 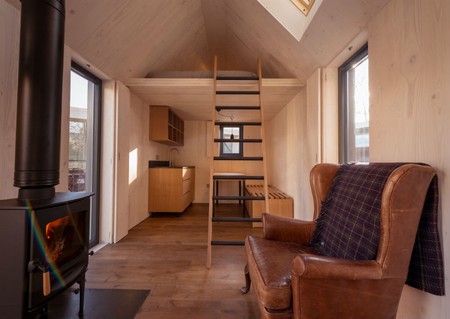 ‘…there’s a need for this connection between the arts, architecture and nature, so we’re going to keep developing and allowing the platform to grow organically.’ —Bothy Project co-founder Bobby Niven. 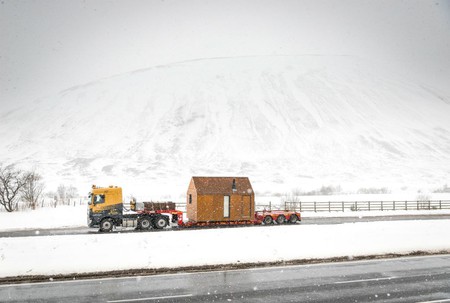 Artist Bothy In Transit, Scotland | © Johnny Barrington / Courtesy Of The Bothy Project
Give us feedback