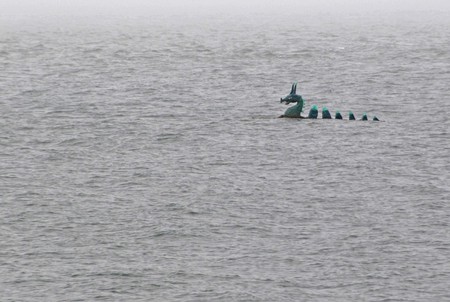 The Loch Ness monster is one of Scotland’s most famous unsolved mysteries. Is there really a Loch Ness monster? There have been many sightings of a creature in the loch over the years, but people are still divided as to whether these sightings are authentic or fabricated. Here are some of craziest Loch Ness monster conspiracy theories to date!

Nessie is an elephant

One theory that has really caught our attention is that from Neil Clark, a curator at Glasgow University’s Hunterian Museum, who thinks that the possible sightings could be elephants enjoying a swim in the middle of Loch Ness! Clark spent two years researching the Loch Ness Monster and concluded that it must be elephants, as what is emerging out of the water resembles an elephant’s trunk and hump.

Nessie is a standing wave from a boat wake

Some people think that due to the fact that Loch Ness is a narrow and long body of water, that the waves may be playing up due to the boats which caused the sightings of Nessie to evolve over time. Some believe that many of the sightings are purely just boat wakes in the middle of the loch, despite there being no boats or ships nearby.

Some theorists believe that the Loch Ness monster is actually just decomposed trees that have fallen into the loch which emerge upwards at random times of the day to create the possible sightings of the Loch Ness monster. Some of the tree logs are covered in a resin that creates gas that eventually explodes out of the tree at speed, creating a wake that may look like a creature from another world!

Nessie is an alien from outer space

Really? You must have heard this one before. Giorgio Tsoukalos, an astronaut theorist, thinks that the Loch Ness monster may be an alien life form from another planet. Tsoukalos believes that ancient alien astronauts interacted with prehistoric humans and created an alien gateway to allow spaceships to travel through. What do you think?!

Nessie is an overgrown eel

According to the Daily Mirror in 1993, it was reported that theorists believed the Loch Ness monster was actually just an overgrown eel wandering the sea. However, experts say that eels often swim sideways, which casts doubt upon the validity of this theory.

Some people presume that due to there being no sightings for the last year or so, that the Loch Ness monster may no longer be alive due to changing climate conditions in the Highlands. Whether the actual monster was alive in the first place and what those sightings were, still remains to be seen.