The Best Things to Do and See in Highland Perthshire

Looking Towards Pitlochry | © Neil Williamson/Flickr
Highland Perthshire is situated in the middle of Scotland and is easily accessed from Glasgow and Edinburgh. Full of things to see and do, no matter how active or sedentary you want to be, Highland Perthshire has something for everyone, from wild safaris to fairy-tale castles and a view fit for a queen.

Crannogs were Iron Age dwellings built in lochs on piles or stilts. The Scottish Crannog Centre is a replica based on the archaeological excavation of a nearby site. There’s plenty to see and do here, including a tour, a museum and the chance to try your hand at ancient crafts. Open April through October, check the website for special events and busiest times. 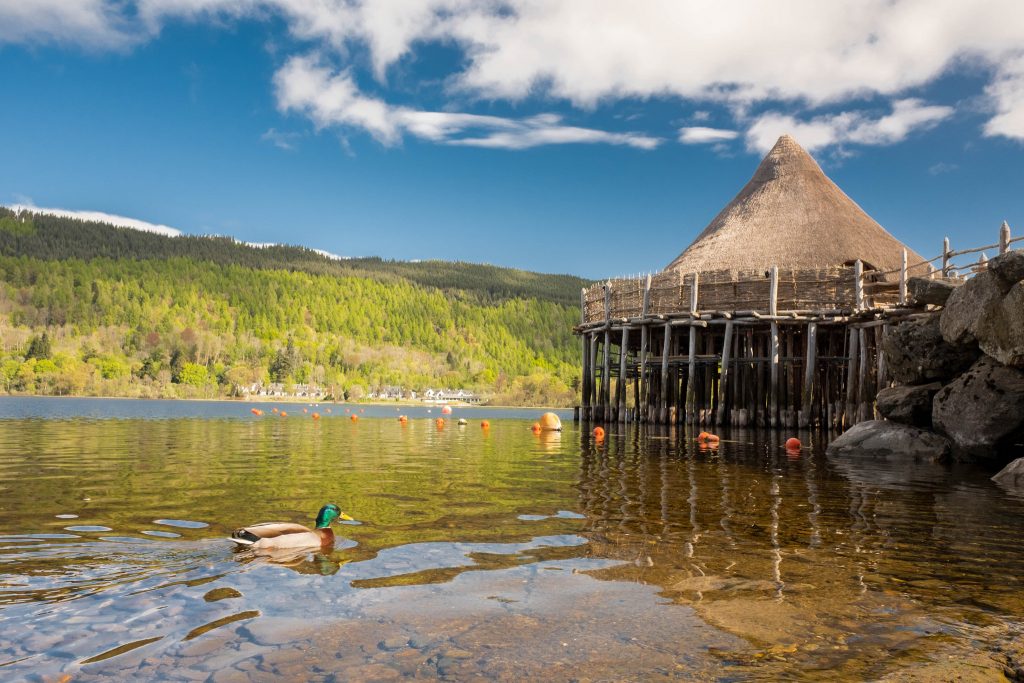 This area of Scotland is full of things to do outdoors, from the relatively gentle, such as pony trekking, to the seriously adrenaline-inducing canyoning. The area gets very busy, so it is wise to book your chosen activity in advance, whether you want to go white water rafting, quad biking, tubing, paintballing or even get a group of friends together to create your own Highland Games with Nae Limits.

Highland Perthshire has a wealth of nature and is among the best places to see the native red squirrels, as they live in the woods that fill the glens and line the rivers and lochs. There are several species of deer, pine marten, otter and, in recent years, beaver. Bird species include golden eagle, black grouse, raven, peregrine and osprey. One particular osprey named Lady raised 50 chicks at the Loch of the Lowes during a period of 24 years! Many people come to the area specifically for bird-watching holidays.

Although you’re unlikely to see lions or elephants, Highland Safaris are still a real treat (and there is always a tiny chance you could see the Highland tiger, a Scottish wildcat). Take a Land Rover, a bike or even a walking safari with an expert guide who will show you around the landscape with a ranger (often wearing a kilt!) and will point out the wildlife while discussing the culture and history, as well as how the whole fits together. These award-winning safaris are an excellent way to learn about the area. Before or after your safari, you can also explore the red deer centre, grab a bite at the café or even pan for gold!

Legend has it that after her visit in 1866, Queen Victoria wrote in her diary that Queen’s View had been named for her, though she had not previously visited. However, there is also evidence to suggest the spot was named for Queen Isabella, wife of Robert the Bruce. Whatever the origin of the name, the view along the loch and beyond the Schiehallion mountain is stunning. On a clear day, you can see as far as the mountains around Glencoe on the west coast of Scotland. There are also lovely walks in the local area and a tea room that is open from April through October. 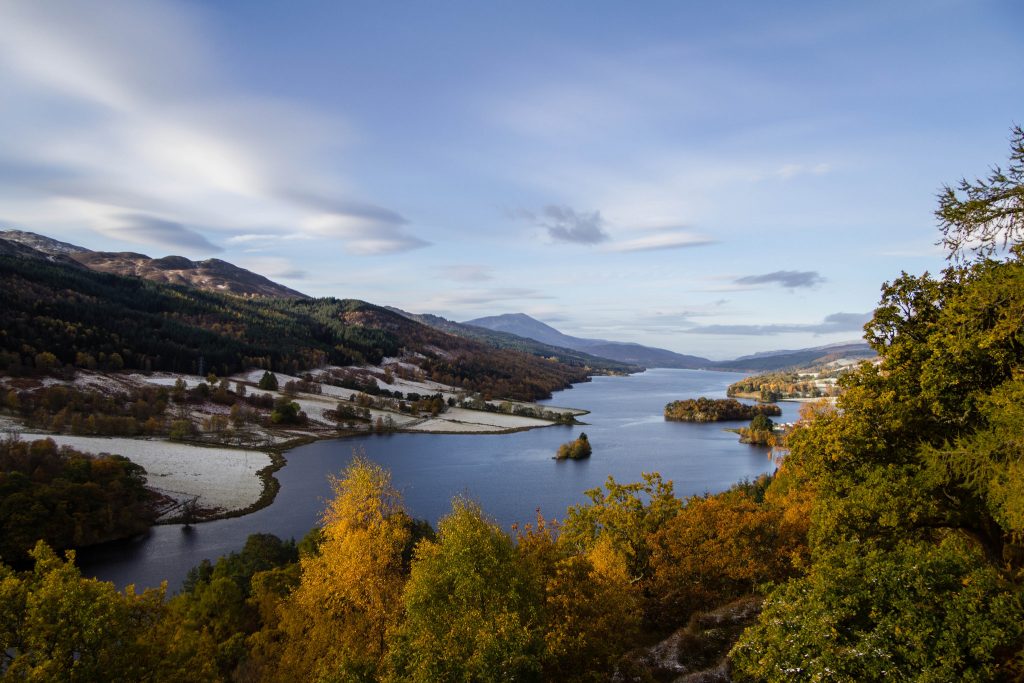 Forest, Concert Hall
The Enchanted Forest | © John McSporran/Flickr
Since 2002, Faskally Woods, near Pitlochry, have hosted a remarkable sound and light experience each October, when the nights are drawing in and the trees are dazzling in their autumnal colour, even without the lights. Multi award-winning, the woods really do transform into a realm of faerie. No matter the weather, the experience is bound to be one you will remember for a very long time, indeed. If you plan to visit Highland Perthshire in October, then you absolutely must see The Enchanted Forest.
More Info
Open In Google Maps
Pitlochry, Scotland, PH16 5LB, United Kingdom
+448712887655
View menu
Visit website
Visit Facebook page
Send an Email
Give us feedback

The largest town in Highland Perthshire, Pitlochry is often used as a base to explore the wider region, but there is much to see and do in the town itself. Visit the Blair Athol whisky distillery, see a play at the Pitlochry Festival Theatre, marvel at the Pitlochry Dam and fish ladder, or visit the award-winning Iain Burnett Highland Chocolatier. Pitlochry is also well-served with excellent places to eat, whether a light snack and cuppa at Hettie’s Tearoom or a delicious meal and a gin and tonic at Fern Cottage Restaurant. Booklovers should be sure to visit Pitlochry Station Bookshop, full to bursting with second-hand, donated books, many that sell for about £1, and the profits go to charity.

Like many Scottish castles, Blair Castle has been fought over and has swapped ownership many times. The seat of the famous Earls and Dukes of Atholl and the ancestral home of the Murray Clan, the oldest parts of Blair Castle date from the 13th century. The Battle of Killiecrankie was fought near here in the Killiecrankie Pass. While visiting, be sure to check out the magnificent gardens and the vast estate that surrounds the castle, which is ideal for walkers, climbers and mountain bikers. If you’re in the area on the last bank holiday weekend in May, visit the Atholl Gathering and Highland Games, hosted by the Duke of Atholl. They are less commercial and more traditional than others, and a lot of fun! 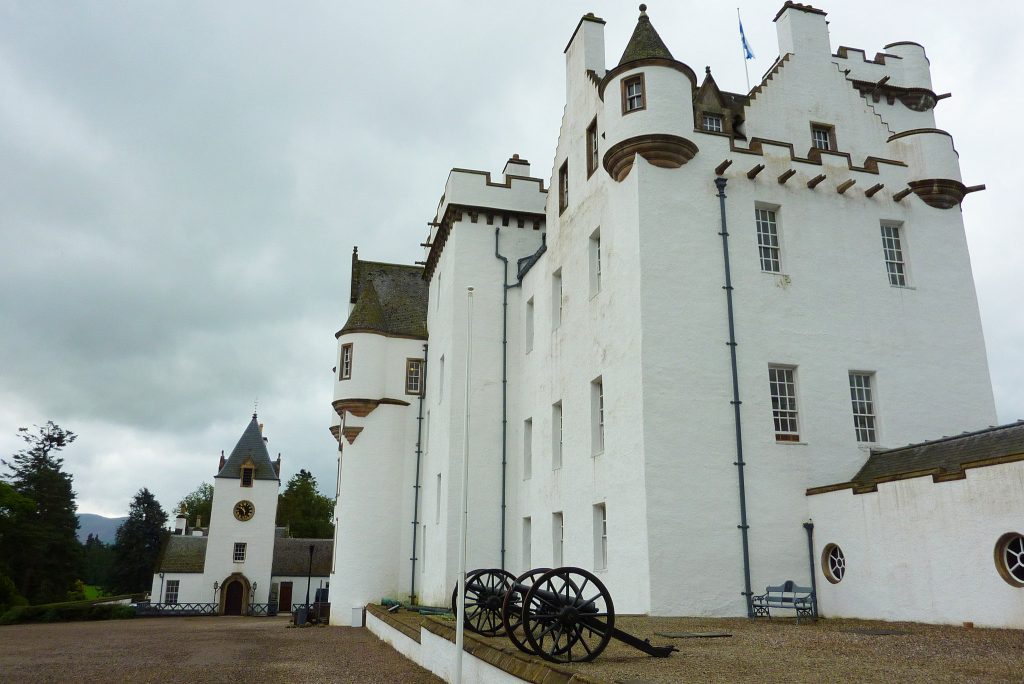