© File Upload Bot (Magnus Manske)/WikiCommons
Robert Burns — or Rabbie Burns to the Scots — is a shining beacon of Scotland. Renowned for his iconic poems and songs, this literary wonder was a pioneer of the Romantic Movement. His words have always made a deep impression; subsequently after his death, Burn’s work inspired many founders of socialism and liberalism. Whether he addressed a haggis, a louse, a mouse, a woman, or a man, this purveyor of words painted a profound picture through his ingenious lyrics. Embark on the ultimate tour of attractions entwined with Scotland’s beloved Bard.

Museum, Bridge
Robert Burns Birthplace Museum | © Richard Szwejkowski/Flickr
Book Now
On the 25th January 1759, Robert Burns entered this world in Alloway, Ayrshire. Today, January is a special month to all Scots, who pay homage to this icon through a string of Burns Suppers and other related festivities. Visit his birthplace, a wee cottage at the museum, and tour the three intriguing rooms where Burns lived until the age of seven. Explore the impressive 70 foot Grecian style temple (complete with nine pillars of mythology muses and exquisite surrounding gardens) designed by Sir Thomas Hamilton in 1823 in honour of Scotland’s son. Trace the footsteps of Tam O’ Shanter as you traverse the 15th-century cobblestone bridge enveloping the River Doon. Tiptoe over the Alloway Auld Kirk and visit Burn’s sister and fathers’ graves, and explore every nook and cranny of the riveting museum riddled with all things Burns related.
More Info
Open In Google Maps
Alloway, Ayr, Scotland, KA7 4PQ, United Kingdom
+441292443700
Visit website

Museum
Robert Burns | Alexander Nasmyth/WikiCommons
A trip to The Burns House Museum in Mauchline is a must for any literary-goers. Burns resided in this historic town from 1784 until 1788. While waiting for his new farm to be completed, Burns stayed in what is now The Burns House Museum with his wife Jean Armour. It was during this time that he started to truly establish himself as a poet and conjure up some of his most creative works. This museum, which underwent refurbishments in 2004, is filled with the most exciting interactive and traditional Burns exhibits. Scour through his beautiful poems, letters, original manuscripts, and objects from his life.
More Info
Open In Google Maps
Castle Street, Mauchline, Scotland, KA5 5BZ, United Kingdom
+441290550045
Visit website

The Writer’s Museum And Makars Court

Burns possessed a certain fondness for Scotland’s capital and referred to her as ‘Edina! Scotia’s darling seat’. The Writer’s Museum is a captivating cabinet of curiosity dedicated to the lives and brilliant works of Scotland’s most prominent literary figures. Set eyes upon the very desk where Burns put pen to parchment and thus made the magic happen. Bookworms can nerd out over the multiple manuscripts pertaining to Burns, one of which includes his draft of Scots wha hae (Bruce’s address to his troops at Bannockburn). Expect a hefty collection of personal objects, published works, and manuscripts all revolving around this Scottish Bard. Be prepared to examine the plaster cast of his skull too. Wander the serene public haven of Makars’ Court (Makar means poet or author in Scots lingo), which features inscribed flagstones in honour of famous Scottish writers.

Rozelle House Galleries is utterly fascinating. Delve deep into the exquisite work of revered Scottish artist Alexander Goudie. His 54 paintings all portray the tale of Tam O’ Shanter — one of Burn’s most epic and gripping narrative poems. This literary work of art came about in 1790 and was published in 1791 when Burns was residing in Dumfries. Although lengthy, this poem features a good mix of Scots dialect as well as English. This exceptional exhibition is housed in the stunning mansion house built in 1760 by the architect of Culzean Castle Robert Adam. 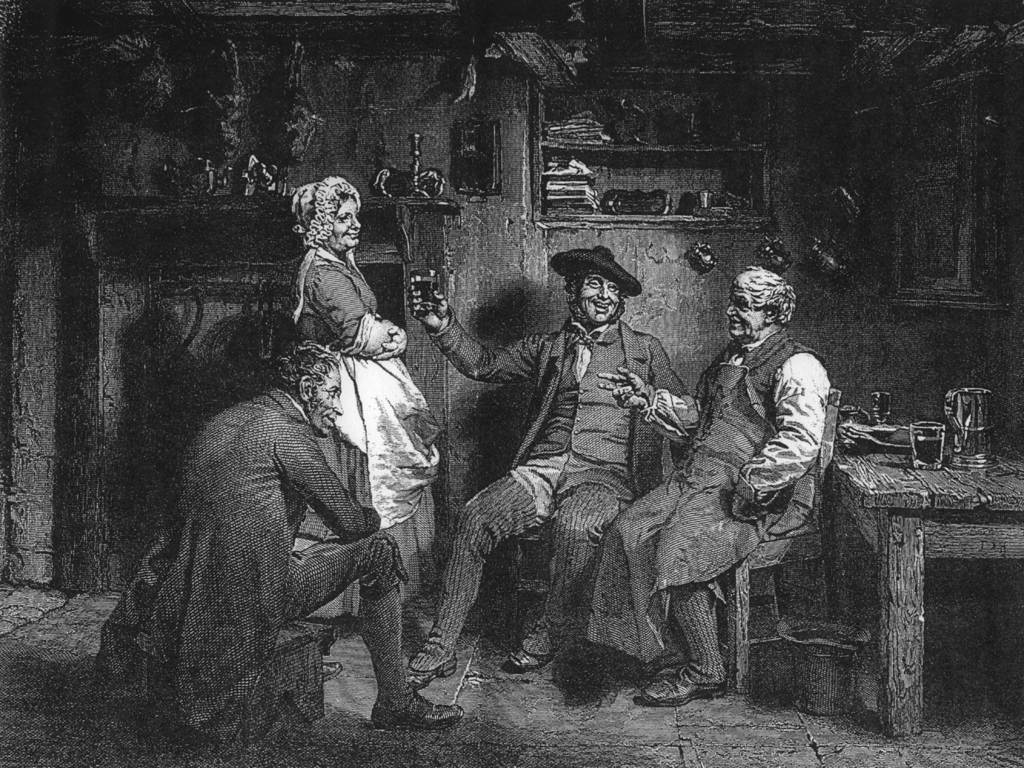 Pub, Pub Grub, Wine, Beer, Cocktails
Robert Burns Plaque | © Stevie Spiers/Geograph
Venture to Dumfries and don’t stop until you come across The Globe Inn— a historic pub located on a flagstone passage. Stuff your face until you can chew no more on the sumptuous selection of pub grub and tour the tiny museum dedicated to the one and only Rabbie Burns himself. Have a dram or two and pontificate over the Scottish Bard’s most beloved works and say cheers with a well-earned toast. This gem of a punter place just so happened to be one of Burn’s most favourite haunts.
More Info
Open In Google Maps
56 High Street, Dumfries, Scotland, DG1 2JA, United Kingdom
+441387323010
Visit website

Museum
Bachelor's Club | © Rosser1954/WikiCommons
The vivacious spirit of Robert Burns is still very much alive today, especially in Tarbolton, Ayshire at the Bachelor’s Club. This club, which was formed by Burns in 1780, was a debating society for local bachelors. The shenanigans of this club took place in a 17th-century house, which has been authentically restored and is available for exploring. Prepare to be enthralled with this museum, which chronicles the formative years of his life and absorb the surroundings of the space where Burns frequented. It was under the thatched roof of the Bachelor’s Club that Burns was initiated into Freemasonry in 1781.
More Info
Open In Google Maps
Sandgate Street, Tarbolton, Scotland, KA5 5RB, United Kingdom
+441292541940
Visit website
Book with our partner and we will earn a small commission.