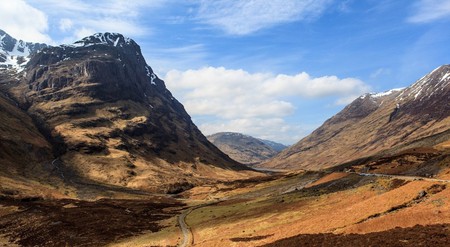 Glen Coe, with its intimidating beauty and breathtakingly ambiguous personality, is Scotland’s most romantic glen. With a tumultuous past and the result of an ice age glacier and supervolcano, this landform is the trusty guardian of the village of Glencoe. To one mind, this sanctuary is a utopia for hikers, and yet to others, it is a resplendent setting for movies.

From the rugged surroundings and wild weather to the horrors of the Glencoe Massacre and the enchanting display of nature, it is easy to see why many a film has been shot in this very spot. From the shenanigans of the Monty Python gang to the notorious Scottish film Braveheart, discover the top five films shot in the valley and surroundings of Glen Coe.

Whether positive or not, Braveheart will no doubt forever put Scotland on the map, with flurries of tourists always eager to visit the mysterious place where it was set. Directed by and starring Mel Gibson, the accents may not be entirely authentic but the scenery is. Shot across Scotland, in particular the Highlands, Glen Coe makes a number of guest appearances, along with Glen Nevis and the Mamore mountains. Buchaille Etive Mor — ‘The Big Shepherd Of Etive’ or a pyramidal 3345 foot mountain to the east of Glen Coe appears in a couple of shots before the sequence where the fort is burned to a crisp.

My Name Is Joe, a meaty 1998 film by Ken Loach starring Peter Mullan, Gary Lewis, David Mckay, Louise Goodall, and Loraine McIntosh, explores the harsh realities of alcoholism and love. Although most shots were filmed in and around the more economically deprived parts of Glasgow, the village of Glencoe is featured (as noted in the script) when Joe stops off at a popular tourist trap. Although the only time in the whole film when Joe leaves Glasgow, he has to retrieve a car with drugs and happens to stop on his return journey. While Joe grabs some tea, he jokingly addresses the nearby happenings of tourists crowding around a piper playing Scotland The Brave. To Joe, Scotland is not so bonnie, which shows how Loach challenges the romantic touristy views of the Scottish Highlands.

Sam Mendes may as well have bestowed the title of ‘Bond’ upon Daniel Craig after directing Skyfall — this Bond film brought matters back to the bare basics of the original cars and Bond’s rugged beginnings. Viewers are given a glimpse of a more humanized and volatile version of James as secrets of his past and upbringing on an old estate in Scotland are revealed. Whether it is the words ‘Welcome to Scotland’ uttered by Bond’s trusty gamekeeper or Bond’s family home ‘Skyfall’ (which is located in Glen Coe), there is no denying that Scotland acts as a stellar background. Today, keen Bond fans from all over still gravitate to Glen Coe to recreate that famous shot of Bond and M gazing into the Scottish Highlands. Interestingly, the 1969 film On Her Majesty’s Secret Service reveals that Bond’s father comes from Glencoe.

Rob Roy, the 1995 film directed by Michael Caton-Jones, stars Liam Neeson, Jessica Lange, Tim Roth, and Brian Cox, to name a few. A dramatized version of the Scottish clan system is portrayed through Clan Chief Rob Roy MacGregor as he battles a nobleman in the Highlands. The surroundings of The Study, an area and viewpoint looking towards mountains known as the Three Sisters, is featured in the film when Rob Roy converses with the band of cattle rustlers. Also, this area is used once more when Rob Roy and his captors appear against these same mountains.

Terry Jones and Terry Gilliam directed cinematic gold with Monty Python And The Holy Grail. The epitome of daft, this classic changed the history of motion pictures and profoundly affects the lives of all who see it. Slapstick at its finest, the Monty Python clan of Graham Chapman, John Cleese, Terry Gilliam, Eric Idle, Terry Jones, and Michael Palin provide side-splittingly hilarious moments for generations of viewers. Near the Meeting of the Three Waters, Glen Coe is the location for the Bridge of Death. It was in this area that a precariously placed narrow strip of rope acted as the bridge over a gorge.