The 10 Most Romantic Scottish Wedding Traditions 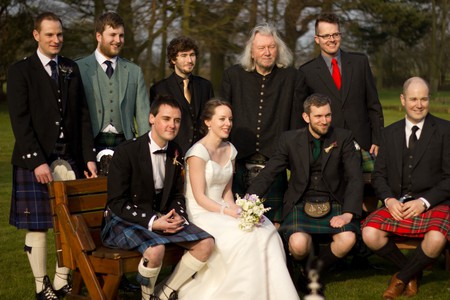 Scotland is one of the most picturesque parts of the United Kingdom, and many people to choose to either get married of have their honeymoon in the scenic region of Scotland. With a wealth of rich history and culture, it is no wonder that the Scots are well-known for having some of the most romantic wedding traditions which make the union even more special. Here are our top 10 Scottish wedding traditions of all time.

Real Scottish weddings of Instagram #12 – can you spot yourself? 📸📸📸

The Speerin is quite a challenging tradition, where the groom must go through a series of tasks and trials to impress their would-be father-in-law before gaining his approval.

A Scottish wedding tradition is to implement a few lucky charms, such as entering the wedding venue with the right foot forward or adding a sprig of white heather into the bride’s bouquet, which is especially popular in the Scottish borders.

Many Scottish weddings use the Scottish Quaich, or ‘Loving Cup’, which is a two-handled silver bowl given to the bride, and then passed around for the wedding party to sip a drink once the legal proceedings have been concluded.

The Lang Reel is a traditional dance which comes from north-east Scotland. The edding party dances until the only couple left is the bride and groom, who have the last dance.

This bag piper was all time! @lodgetorreypines

A post shared by Vallentyne Photography (@vallentynephotography) on Apr 29, 2017 at 8:17pm PDT

In the region of Fife, it is tradition to conduct a feet-washing ritual, whereby the bride sits on a stool while an older, married woman washes and dries her feet.

The wedding scramble, as it is known, is where the bride’s father steps into the car and throws a handful of coins for the children to collect. In Ayrshire, this custom is known as ‘warsal’ and is very popular in Scottish weddings.

The traditional grand march, as it is known in Scotland, is the first dance to take place at a wedding reception. It begins with the bride and groom marching to the sound of bagpipes or a live band.

The Scottish bride is often adorned with a luckenbooth, which is a brooch given as a token of love by the groom. They are normally made of silver and engraved with two love hearts.

One of the most traditional gifts at a Scottish wedding is the clock. Clocks are traditionally given to the couple by the best man, and the maid of honour normally gives the couple a tea set as a wedding gift.