The 10 Best Restaurants In The Isle Of Skye 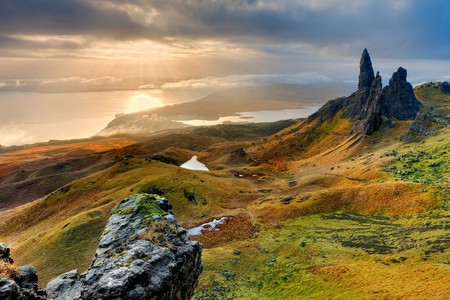 As an island in Scottish Inner Hebrides, fishing and agriculture are some of Isle of Skye’s main industries, and as such its restaurants use fresh and locally produced food. Many of the buildings these restaurants are housed in reflect the rich history of the island. Here are 10 must-try establishments if you happen to be visiting this beautiful area. 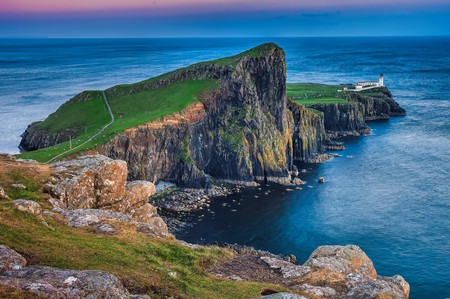 Cafe, Restaurant, British, Tea
Facebook
Email
Twitter
Pinterest
Copy link
Share
Map View
With a spectacular view looking over the MacLeods Tables on the Duirinish Peninsula, Red Roof captures the natural character of the Isle of Skye. The interior is decorated according to the theme of ‘Skye Landscapes’, featuring art from local artists. The restaurant provides well for vegans and vegetarians, with vegan cake included on the menu. Red Roof Café is definitely more of a lunch destination than dinner – you will not get a five course meal here – but the cute, colourful gardens, quaint atmosphere and scenic surroundings make it worth travelling for.
Open In Google Maps
Holmisdale, Glendale, Isle of Skye, Scotland, IV55 8WS, United Kingdom
+441470511304
Visit Website
Visit Facebook page
Give us feedback 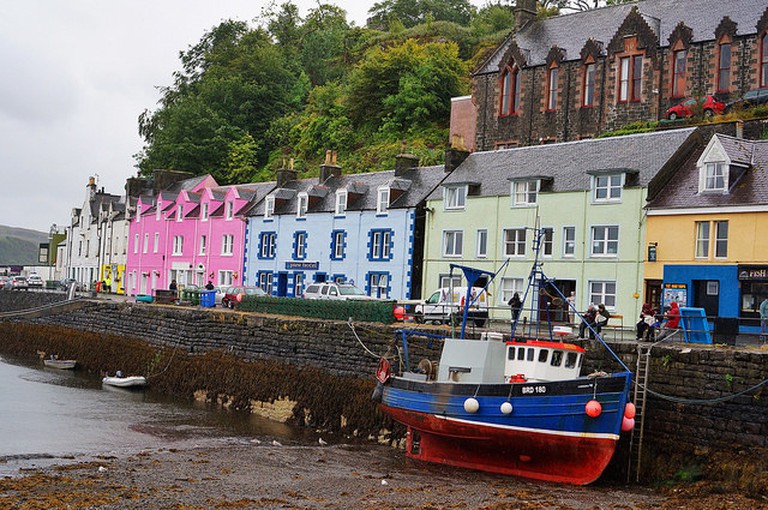 Portree Harbour | © Gitta Zahn/Flickr
Built in the 1870s as a schoolhouse originally, The Old School Restaurant opened in 1985 and has remained in the ownership of the Mackenzie family ever since. It is a popular venue for both locals and visitors as a result of its friendly and comfortable atmosphere. Like most restaurants on the Isle of Skye, their menu varies according to produce availability on the island. Main meals are quite costly, but they are undoubtedly worth it as the food is perfectly curated and cooked.
Open In Google Maps
Dunvegan, Isle of Skye, Scotland, IV55 8GU, United Kingdom
+441470521421
Visit Website
Give us feedback 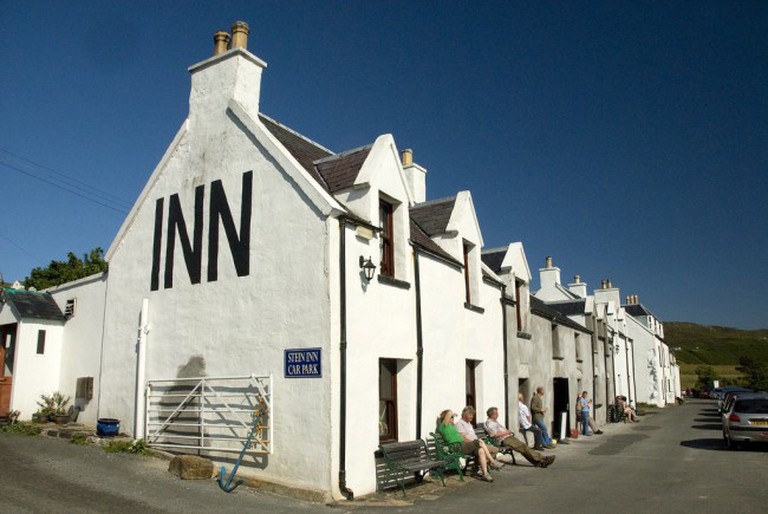 The Stein Inn | © Bryan Ledgard/Flickr
Located by Portree’s historic harbour, in a conservation area, Sea Breezes Restaurant provides picturesque views over the quayside. Sea Breezes specialises in beautifully constructed seafood dishes using locally sourced ingredients from Skye and the surrounding islands, reaching as far as Barra. The sea bass and the teriyaki salmon are favourite dishes among visitors. This restaurant is very popular, so booking is essential. The atmosphere is always jovial and customers are certain to leave with a smile.
Open In Google Maps
Quay Street, Portree, Scotland, IV51 9DE, United Kingdom
+441478612016
Give us feedback

Hotel Restaurant, British, Pub Grub
Facebook
Email
Twitter
Pinterest
Copy link
Share
Map View
Set in an 18th century inn – the oldest on the island – on the North West coast, Stein Inn provides a traditional Scottish experience in a uniquely picturesque setting. It has been highly commended by Taste of Skye and Lochalsh two years running as a result of their classic Scottish dishes. The menu in the restaurant changes daily according to availability – a strong assurance that customers receive only the freshest produce. All meals are freshly prepared to order and the highland bar sells over 99 varieties of malt whiskey.
Open In Google Maps
Macleods Terrace, Stein, Scotland, IV55 8GA, United Kingdom
+441470592362
Visit Website
Give us feedback

In a more remote area of the Isle of Skye, Ullinish Country Lodge sits amid rugged, romantic moorland. With scenic cliffs, beaches and castles nearby, this is the place for a quiet escape for anybody who loves the countryside. At a minimum charge of £55 for a five course meal on a set menu, Ullinish is moderately priced for its standard. The interior decor, exterior surroundings and superb dishes combine to form a divine dining experience. The hotel itself has a rich, literary history; illustrious English writer Samuel Johnston and Scottish lawyer and author James Boswell stayed at Ullinish in the autumn of 1773. 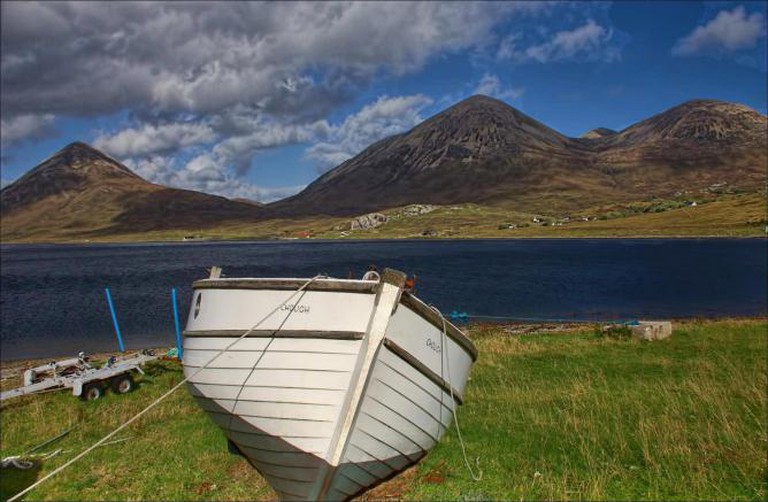 Beinn na Caillich rises | © Oliver Clarke/Flickr
Described as the perfect romantic spot for couples, Kinloch Lodge Restaurant provides an upmarket dining experience. Formerly a clan hunting lodge, the building is decorated with paintings of the MacDonald ancestors, providing the atmosphere of a close family dinner. Marcello Tully, the head chef, and Claire MacDonald, one of the owners, have a genuine passion for great food. Marcello has received multiple awards for his exceptional cooking including 3 AA rosettes and an Eat Scotland Gold Award.
Open In Google Maps
A851, Sleat, Isle of Skye, Scotland, IV43 8QY, United Kingdom
+441471833333
Visit Website
Give us feedback 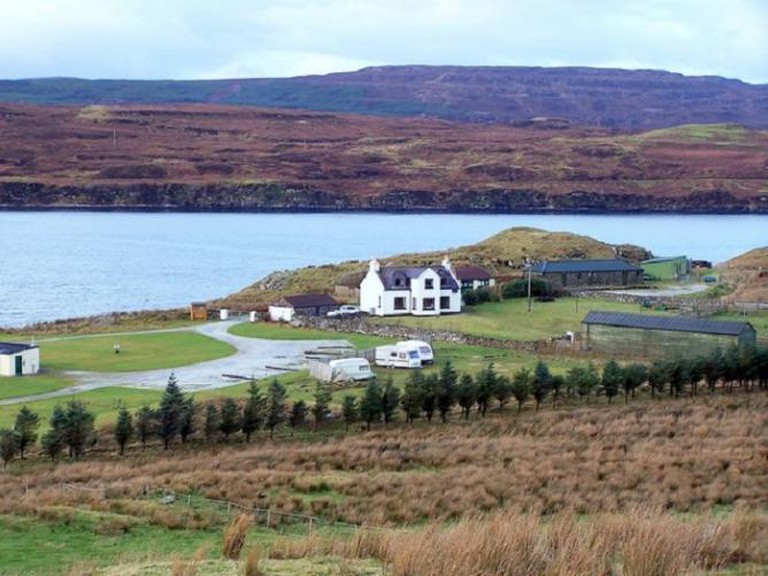 Loch Greshornish | © Richard Dorrell/geograph
A family run business, Claymore Restaurant provides a light-hearted atmosphere with sea views and a view of Beinn na Caillich, one of the Red Hills of Scotland. You can dine on their newly-furbished deck in the summer months, for an even better view. Their seafood is always fresh, and their Scottish Rib Eye Steaks and Stornaway Black Pudding are supplied by the local butcher. Meals are homely and come in large portions, and with their offer of free ice cream for under 12s who finish their meal, it’s the perfect family restaurant.
Open In Google Maps
Broadford, Isle of Skye, Scotland, IV49 9AQ, United Kingdom
+441471822333
Visit Website
Give us feedback

Originally built as a farmhouse, many of the traditional elements of the Edinbane Inn have been retained, including a stove, open fire and exposed stone walls. With beautiful views overlooking Loch Greshornish, it’s a peacefully secluded place to dine. Like many of the restaurants on this list, Edinbane’s menu changes to match the availability of produce. Every meal however is carefully designed to create a unique taste experience. Traditional music sessions take place three times a week in the evening to form a really special atmosphere. 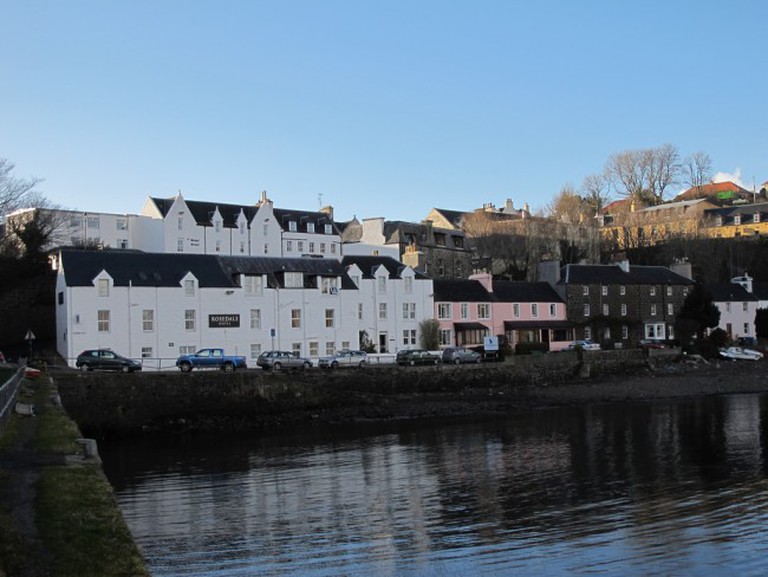 The Rosedale Hotel | © Patrick Mueller/Flickr
For something uplifting and refreshing, Café Arriba has bright, colourful decor sure to lift your spirits, and during holidays these are supplemented with festive decorations. Café Arriba always uses locally sourced and fair trade ingredients whenever possible, and there are multiple vegetarian dishes (with vegan options available upon request) on the menu. The old-style blackboard menus add extra charm to the comfortable and vibrant atmosphere. Windows look out onto Loch Portree, providing a wonderful view.
Open In Google Maps
Quay Brae Portree, Scotland, IV51 9DB, United Kingdom
+441478611830
Visit Website
Give us feedback

Hotel
Facebook
Email
Twitter
Pinterest
Copy link
Share
Map View
Rosedale Hotel was originally formed from three fishermen’s cottages dating back to the early 19th century. It looks out over the working harbour, so you can watch the fishing boats going in and out to sea as you dine. Much local wildlife, including eagles, dolphins and otters, can be seen from the hotel. The buildings of the hotel have previously served various functions, from the village Supermarket Co-operative, to a bakery and private living quarters. The restaurant has retained much of its character from these former days; the baker’s oven is still in situ in the bar.
Open In Google Maps
Beaumont Crescent, Portree, Scotland, IV51 9DF, United Kingdom
+441478613131
Visit Website
Give us feedback
Give us feedback