The 10 Best Books About Glasgow

Home to The Mitchell Library, one of Europe’s largest public libraries, as well as The Scottish Writers’ Centre, Glasgow is undeniably a thriving literary city, a creative place boasting a rich heritage of electrifying writers, poets and comedians. With a host of authors giving life to their Glaswegian home and recounting the untold stories of its people, we’ve narrowed it down to the top 10 books that encapsulate the spirit of Scotland’s largest and most lively city. 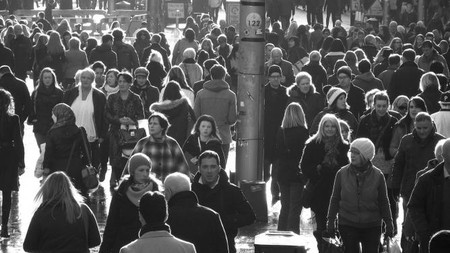 Ask any of Glasgow’s older residents to name a book about their hometown and they will more than likely mention No Mean City, a title which has come to embody the experiences of an entire working-class generation. The novel is set in the 1930s in Gorbals, an area on the south bank of the River Clyde once characterised by its lack of jobs, severe poverty and proliferation of violence. These factors gave rise to the formation of Glasgow’s infamous ‘razor gangs’, a system of violent criminal gangs named after their most-used weapon. The novel follows the fictional story of Johnnie and Peter Stark, two brothers from the slums who attempt to forge success both inside and outside of the gang world. Whilst Johnnie becomes the much feared ‘razor King’ of the neighbourhood, Peter attempts to establish himself as a member of the middle class, with both meeting a harrowing end. Brutal, bloody and shockingly honest, No Mean City tells the dark story of a bygone Glasgow and highlights the struggles of a generation trapped within a self-perpetuating cycle of poverty. 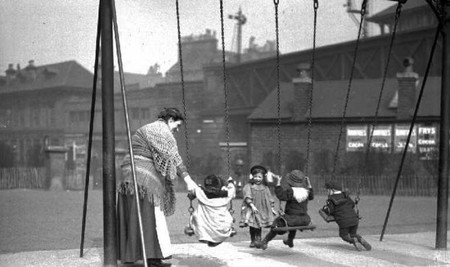 Shoes Were For Sundays by Molly Weir

The first part of a series of three autobiographies entitled Molly Weir’s Trilogy of Scottish Childhood, this book is a humorous, no-nonsense account of growing up in post-WWII Glasgow. Being raised in the city’s iconic tenement flats, Weir describes her childhood world of hardship, games, pain and joy whilst living in one of the UK’s poorest areas. With whole families packed into one-bedroom apartments and neighbours living virtually on top of one another, Weir tells the story not only of herself but of her friends and her community. A story of solidarity and of a city’s plucky refusal to be victimised, Shoes Were For Sundays and the other two books in the series, Best Foot Forward and A Toe on the Ladder, manage to perfectly capture Glasgow’s famous dark humour and spirit. 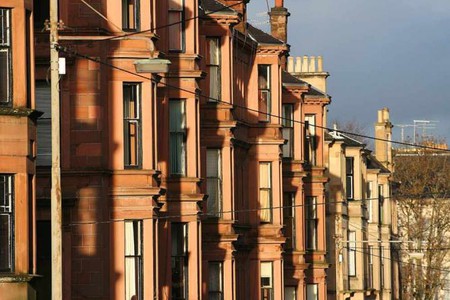 Lanark: A Life in Four Books by Alisdair Gray

Awarded the ‘Saltire Society Book of the Year’ accolade shortly after being published, as well as the ‘Scottish Arts Council Book of the Year’ in 1984, readers are ensured a critically acclaimed and fascinating read in Lanark. This cult classic is split into four parts, beginning with the third, with the intention that readers can reorder and reinterpret the work with every reading. In the first book, the protagonist wakes up on a train in a dystopian city which is much like modern Glasgow but is somehow different, and he is unable to remember his own name. He chooses the name Lanark based on a distant memory, and the plot follows him as he discovers the history of his previous self, Duncan Thaw, and becomes involved with a mysterious group of politicians and social misfits. Innovative, experimental and deeply philosophical, this novel accentuates Glasgow’s urban beauty as well as its multifarious character. 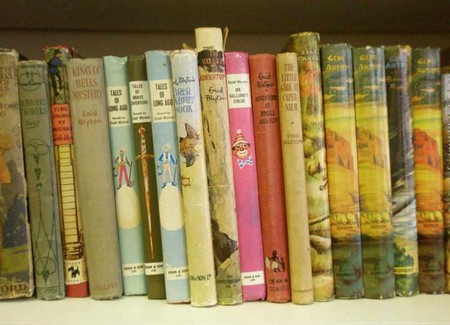 A work with a title derived from the Gaelic meaning for the name ‘Glasgow’, The Dear Green Place is a novel that brings the city’s streets and buildings alive on paper. Seen through the eyes of working-class hero Mat Craig, the novel tells a story of a Glasgow which is both nostalgic and limiting, longed for yet resented. Desiring to be a writer and intellectual, Mat battles to realise his dreams whilst being influenced by the attitude of his large family, who see writing as a waste of time for the idle rich. Striving to create an identity for himself within a harsh, industrial world that tells him he doesn’t exist and that his dreams don’t matter, Mat’s story highlights the educational class divide between the city’s residents, and gives voice to a new type of literary hero. The descriptions of the city in the novel are some of the most striking and resounding to be found, with a concrete sense of place being built upon in every sentence. 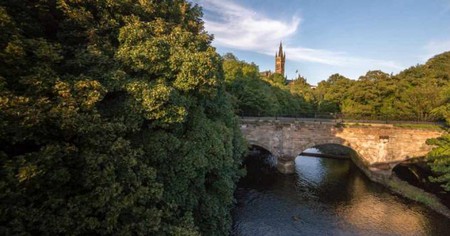 A coffee table centrepiece, Along Great Western Road tells the compelling history of Glasgow’s West End, an area which has come to be known as the city’s most artsy and bohemian suburb as well as one of its richest. The book chronicles the area’s evolution from a quiet miner’s village to an opulent Victorian suburb, now home to some of Glasgow’s brightest intellectuals and wealthiest socialites. A well-told and fluent celebration of all things West End, the book illustrates the development of some of the city’s most important architectural masterpieces, from the University of Glasgow buildings built in 1451, to The Kelvingrove Art Gallery and Museum. Offering an excellent comparison of Glasgow’s past and present functions, and drawing attention to the success of its citizens, Along Great Western Road is a touching example of the city’s fluidity and openness to change.

The Shipbuilders by George Blake

Renowned as once being one of the shipbuilding capitals of the world, known as ‘the Second City of the Empire’ after London, Glasgow was built upon the shipbuilding industry and to this day carries memories of its importance. Paying homage to this heritage, George Blake’s novel The Shipbuilders tells the story of wealthy yard boss Leslie Pagan and his working-class employee Danny Shields. With the Clydeside dockyards suffering severe damage during World War II and the industry consequently falling into disrepair, Pagan is forced to close his yard and lay off the employees who have been unshakeably loyal to him in the past. A wartime novel exploring issues of loyalty, class and politics whilst chronicling Glasgow’s industrial past, this book offers an excellent way to learn about the city’s heritage and economic development. 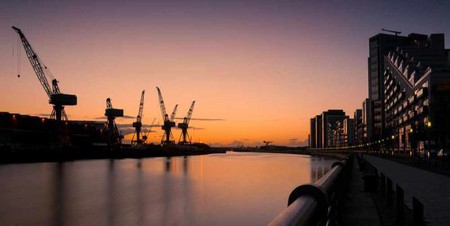 Harbour of the River Clyde | © BrownRobert73/Flickr

Written in 2005, Divided City by Theresa Breslin exposes some of the contemporary issues faced by young people in Glasgow, focusing particularly on ideas of sectarianism and racism. The novel tells the story of Joe and Graham, two Glaswegian teenagers who find companionship by playing football together despite their seemingly divergent backgrounds of Catholicism and Protestantism. When Graham witnesses the violent stabbing of an innocent asylum seeker in the town centre, Joe rushes to aid the two men. From then on each begins to see the world through the other’s eyes, understanding issues of race and prejudice like never before. Through its easy-to-read and accessible narrative, Divided City explores and questions Glasgow’s age-old football rivalries and their corresponding religions, and highlights the racial tensions that surround the sport. A great read for both young and old, Breslin compels her reader to contemplate the effects of bigotry and xenophobia, and to question their approach towards their fellow city residents.

We Need to Talk About… by Kevin Bridges

This autobiography by Glasgow’s favourite comedian is an absolute must-read for those attempting to capture the city’s unique sense of humour. Hilariously honest, relatable and topically relevant, the book will have readers in stitches by the third page as Bridges talks them through his Glaswegian childhood and unexpected rise to fame. Behind the laughs however, there is a much deeper significance to the book as Bridges recounts his lack of confidence growing up and the insecurities that plagued him. Alongside his own struggles, the comic manages to draw attention to a number of social and political issues unfolding in his home city, topics centring around inequality. With a voice which is both articulate and resounding, yet still wildly entertaining, We Need To Talk About… Kevin Bridges is an excellent exploration of the city, its citizens and its concerns. 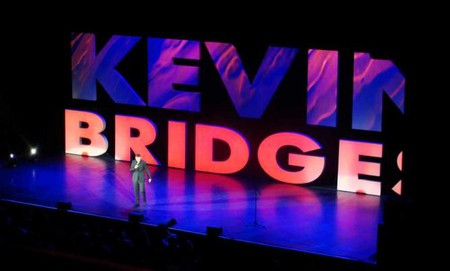 This trilogy of suspense thriller novels is perfect for readers searching for a bit of excitement. Written by Glasgow-born Denise Mina, the novels have been described as masterpieces of ‘tartan noir’, a genre of crime fiction characterised by its Scottish roots and atypical anti-heroes. Named after an area in the city centre, the book’s rousing plot follows the amateur sleuth Maureen O’Donnel as she attempts to find the killer of her married lover, before the killer finds her. Undeniably gripping with a well-thought-out plot line, the novel also deals with complex issues of sexual abuse and the struggle for survivors to establish an identity free from their past. Glasgow residents will enjoy the who’s who of streets and landmarks mentioned in the narrative as Mina paints a colourful and realistic picture of her home city, dispersing her knowledge of its idiosyncratic character and style.

Throughout history, Glasgow has been a somewhat overshadowed city whose limelight has often been stolen by its larger or better-known counterparts, such as London and Edinburgh. Yet in his collection of Glasgow histories, John Burrowes reveals that the city has been the setting for some of the world’s most important and revolutionary events, playing an important role in each. In this inspiring work of non-fiction, the author shares first-person accounts of the circumstances that have rocked the city, from the Blitz bombings to the launching of the Queen Mary. Told with great humour and an endearing dose of personality, Burrowes’ voice encapsulates the voice of an underestimated city, celebrating the enduring spirit of its public. Including a number of biographies on Glasgow’s most famous citizens such as the much-loved comedian Billy Connely, Great Glasgow Stories reminds readers of the town’s silent greatness.