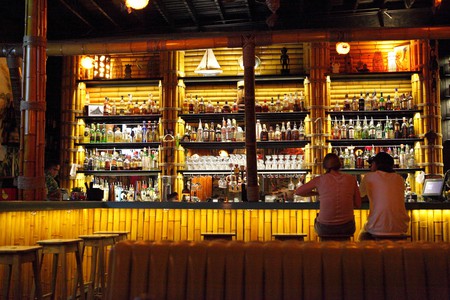 The small Scottish coastal town of St Andrews is globally renowned for its ancient university, Medieval ruins and for being the original home of golf. The constant influx of tourists and a youthful student population have meant that despite its size, the town has become a metropolitan hub with some of the best hotels, restaurants and bars in the whole of the UK. We discover the best places to go for drinks in St Andrews.

Having opened in the centre of town only a couple of years ago, The Adamson bar and restaurant has rapidly become one of St Andrews’ most frequented fine-dining establishments. The bar is open throughout the day for those who just want to come for drinks and offers an extensive selection of excellent cocktails at affordable prices. The bar’s signature drink is the Smokey Old Fashioned, an overlooked 19th century cocktail, the presentation of which is worth the money in itself. Seating is often limited during the busiest hours, as the bar is situated within the restaurant, but those lucky enough to get a place can witness the skilled mixologists at work. Named after Robert Adamson, a Victorian pioneer of photography who lived and worked in the building, this modern bar has done well to capture the essence of Adamson’s interest in aestheticism. 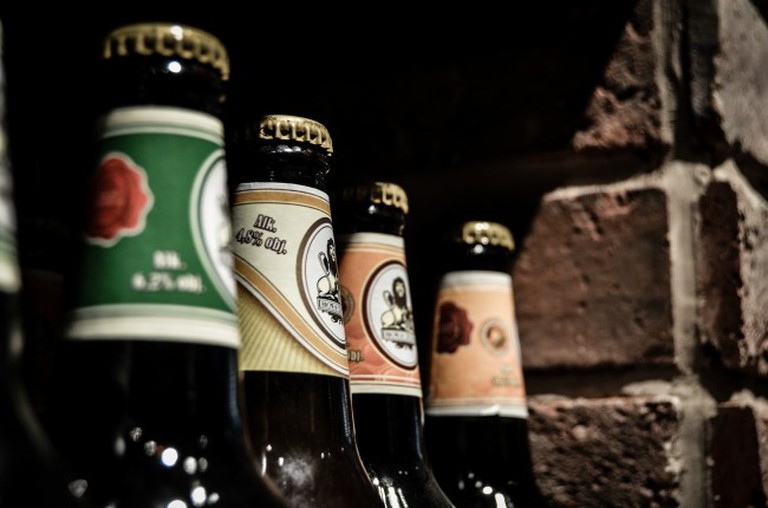 Beer | ©Pixabay
A cult preference amongst many students, Aikman’s is a small, traditional, vibrant pub, half of which is actually based underground. Advertising the ‘most interesting drinks list in St Andrews’, Aikman’s has hundreds of diverse cask ales and European beers which aren’t supplied anywhere else in town and which have seen the pub placed in the Good Beer Guide every year since 1987. There are wines and spirits for those less interested in beer, but these are usually served with looks of mocking incredulity by the friendly bartenders. Open for almost three decades, there is a certain homey feel to Aikman’s. There are usually a few local blues bands who play throughout the week, otherwise the owner just puts on his 1970s cassette tapes at full-volume.

The Central first opened its doors in 1874 and is still packed almost every night. Whilst many places in town feel like they are dominated by university students and tourists, the Central is enjoyed by members of both town and gown in equal measure. Like Aikman’s, it has kept its traditional appeal. The Central is well reputed in terms of the beers, ales and whiskies it has on offer, as well as its buoyant atmosphere which is only heightened when major sports fixtures are screened. The pub is central not only by name or geographically but as a key part of the St Andrews bar experience. 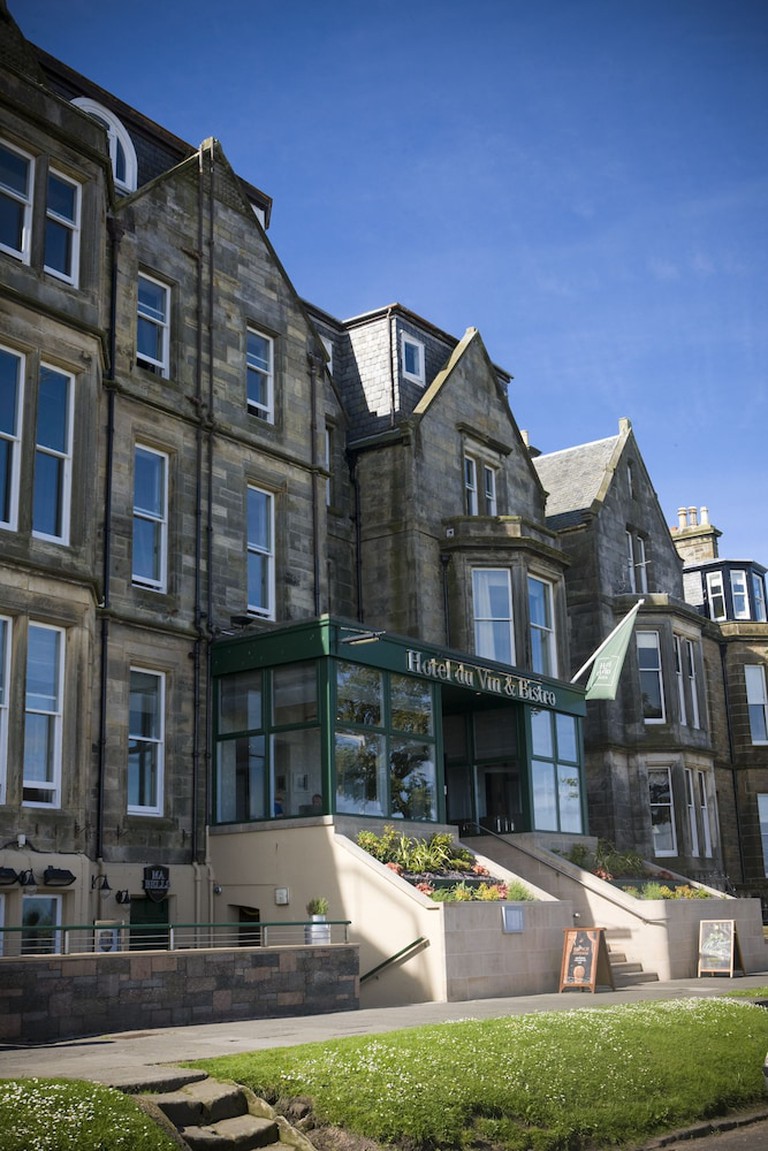 View Rooms
From $220 Per night per room

Located on the tranquil and picturesque Scores street is the The Hotel Du Vin hotel. As the name would suggest, the bar’s main feature is its dedication to providing an eclectic wine-list, but it also stocks an impressive array of spirits, cigars, and cocktails ranging from Long Island Iced Teas to Whiskey Sours. The bar consists of a cosy couched seating area and a lighter, airy conservatory well-suited for afternoon drinks and more sizeable gatherings. It also lays claim to the town’s only heated patio-area, which enables you to enjoy the crisp Scottish air in all seasons.

The Road Hole Bar at The Old Course Hotel 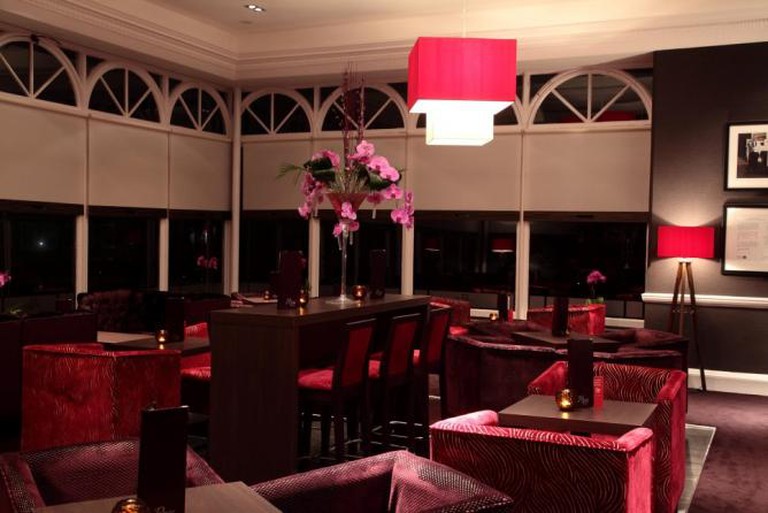 Overlooking the world’s oldest golf course, The Road Hole Bar is situated on the top floor of the five-star Old Course Hotel, boasting stunning, panoramic view of St Andrews and the town’s finest selection of champagnes, cocktails and whiskeys. With over 300 types of whiskies, this is a haven for Scotch connoisseurs and one of the best places to develop a taste for some of the finest-quality whisky. For those less enamoured about whiskey, there is a wide variety of traditional and contemporary cocktails, and the staff are accommodating and knowledgeable about any orders on the menu. The atmosphere is always formal but warm and perfect for celebrations, post-golf drinks or even just to watch the sun set over the beautiful West Sands. 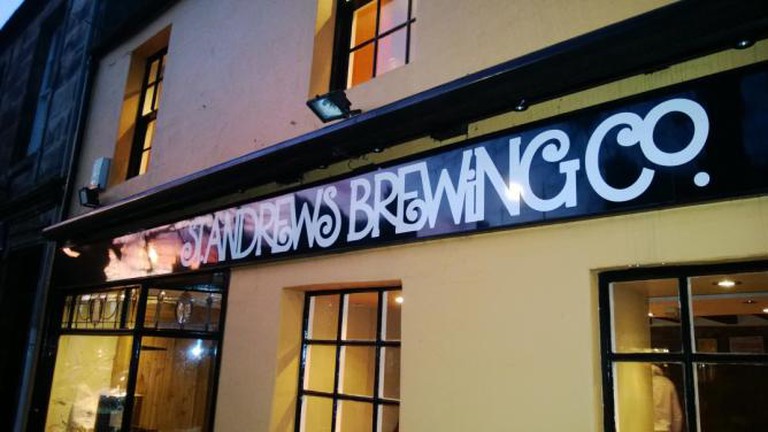 RBar, St Andrews | Courtesy of St Andrews Brewing Co.
Perhaps the least known of St Andrews’ up-market bars, The R-Bar is located within the reputable Macdonald Rusacks Hotel and is part of the multi-award-winning Rocca Restaurant. The lounge is spacious, modern and comfortable, providing an unrivalled ground-level view of the final hole of the Old Course and the West Sands which lie beyond. Like the Road Hole Bar, this establishment prides itself on its range of champagnes and malt whiskies, but it provides a much more relaxed environment for those looking for somewhere elegant but casual. The owners of the R-Bar have gone to great lengths to successfully create an inviting, calm atmosphere for its visitors, where it’s easy to spend hours without noticing the time passing.

The St Andrews Brewing Company is a firm favourite amongst many students and locals alike. This bar fills up almost every night and is the best place in town to go for casual drinks with friends or family. The layout is highly innovative and modern, with barrels used as counters and three main corners with sofas, couches and large tables. There is even a German-style beer hall upstairs with benches stretching across the entire length of the room, providing a completely unique and sociable setting. The bar has developed a reputation for its wide choice of high-end whiskies and gins, but it really excels in its selection of over 170 beers, ales and a cider so popular that it’s subtitled ‘this is the one you like’ on the drinks’board. The staff are incredibly helpful and well-informed about the drinks on offer and are usually happy to give detailed recommendations if you don’t know exactly what you’re looking for.
Give us feedback