Nicknamed ‘the Athens of the North’ for its prominent classical influences, Edinburgh is dotted with public sculptures of legendary Scottish icons including the poet Robert Burns, Enlightenment philosopher David Hume and the illustrious Highland Terrier, Greyfriar’s Bobby. In celebration of a truly dynamic artistic heritage, we take a closer look at the five best public sculptures in Edinburgh. 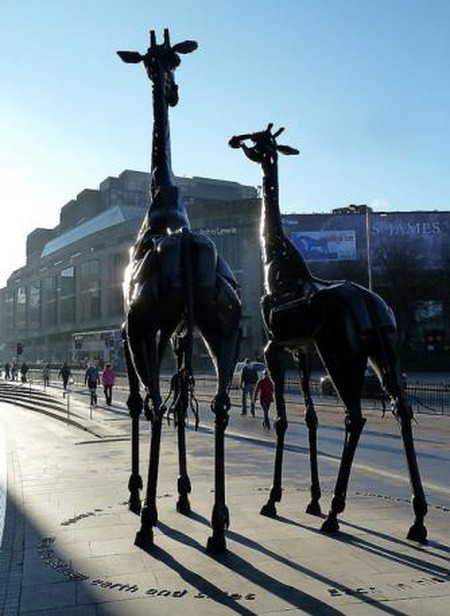 Standing tall in front of Edinburgh’s Omni Centre at the top of Leith Walk are two open-work, scrap-metal giraffes—a mother and her adoring calf—facing towards the east end of Princes Street. Unveiled in 2005, the installation, entitled ‘Dreaming Spires’ was crafted by Scottish artist Helen Denerley (b. 1956) out of recycled car and motorcycle parts. Referred to as ‘Martha and Gilbert’ by Denerley and her collaborators, the pair are encircled by the Roy Campbell poem ‘Giraffes’ (1946), written in bronze letters on the pavement. Towering over crowds of curious passers-by, the sculptures personify Denerley’s vision of ‘Dreaming Spires,’ a term taken from a 19th century poem by Matthew Arnold in reference to Oxford’s ethereal skyline. A city of dreaming spires in its own right, Edinburgh is an ideal setting for Denerley’s artistic interpretation. Addressing the otherwise incongruous relationship between subject matter and location, Denerley explained quite simply, ‘it seemed like the site was crying out for giraffes’. 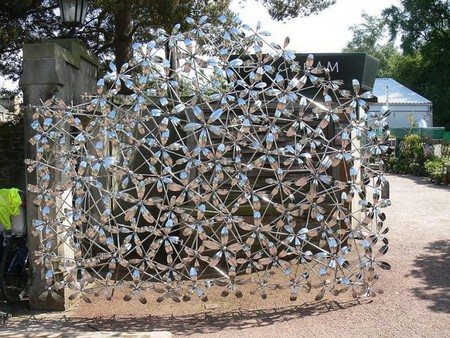 Since its installation in 1996, architect Benjamin Tindall and blacksmith Alan Dawson have welcomed visitors through the East Gate of the Royal Botanic Gardens in style. Intricately adorned with Rhododendron calophytum flowers, this expertly crafted stainless steel gate is a nod to the world of horticulture, conservation and garden design that it encloses. Tindall and Dawson’s whimsical construction replaced the original wrought iron gates, featuring a similar Rhododendron motif circa 1934.

Far from the realm of traditional public sculpture, Charles Jencks’s ‘Landform Ueda’ rises from the lawn in front of Modern One, the first of two stately buildings that comprise Edinburgh’s Scottish National Gallery of Modern Art. Completed in 2002, ‘Landform Ueda’ is a contemplative, organic and interactive form of sculpture upon which visitors may wander, following its paths, steps and banks to three crescent-shaped pools subtly integrated into its design. Heavily inspired by natural shapes and cosmological patterns, ‘Landform Ueda’ is Jencks’s artistic interpretation of a chaotic attractor, named after the Japanese scientist who discovered its function. Charles Jencks (b. 1939) is an American-born landscape architect and designer widely respected for his significant contribution to modernist and postmodernist architectural theory. He lives and works in Scotland. 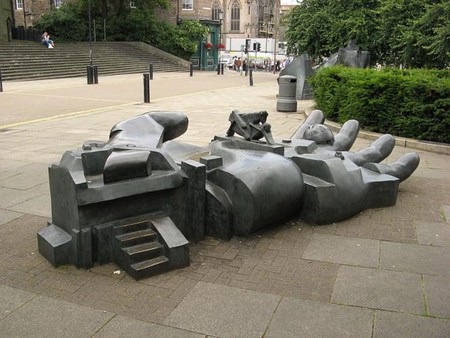 The Manuscript of Monte Cassino

Assembled outside of St. Mary’s Roman Catholic Cathedral, this three-piece bronze sculpture communicates a series of allegories. Designed by local artist Eduardo Paolozzi (1924-2005), ‘The Manuscript of Monte Cassino’, also known as ‘the Big Foot,’ alludes to the travelling foot, the ankle which connects and the hand that receives. Polozzi said of his work, ‘Edinburgh, with its fine historic architecture must be complemented with works of suitable grandeur, with sculpture…[that] reflects the everlasting inspiration that the city has drawn upon from classical models.’ A classically inspired concept reimagined in a contemporary aesthetic, ‘The Manuscript of Monte Cassino’ exemplifies Edinburgh’s rich artistic heritage.

Hidden down a tree-lined path that follows the Water of Leith from Stockbridge to Dean Village is a classical statue of Hygeia, the Greek goddess of health. She stands in the centre of a large stone pavilion over St. Bernard’s Well, named after the land’s original owner. The well beneath this sculpture contains a mineral spring discovered in the mid-eighteenth century, subsequently thought to possess healing powers. In 1789, Scottish artist Alexander Nasmyth (1758-1840) was commissioned to build ‘Hygeia’ as a well house, inspired by the Roman temple of Vesta in Tivoli. Now regarded as one of Edinburgh’s many romantic points of interest, ‘Hygeia’ and her surroundings make for an unexpectedly picturesque scene close to the bustle of Edinburgh’s charming neighbourhoods.