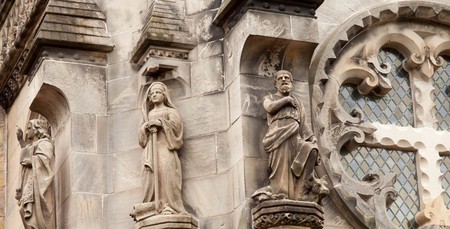 Rosslyn Chapel is the Pandora’s box of Scotland. Situated on the outskirts of Edinburgh in a wee village called Roslin, this stunning 15th century chapel is shrouded with secrets and stories. Since the release and subsequent popularity of the 2006 movie The Da Vinci Code, this Scottish sanctuary has been a most budding attraction. Whether or not the Holy Grail is concealed within the grounds of this spectacular gothic display of architecture, a visit to Rosslyn Chapel is an absolute must.

The origins of Rosslyn Chapel are still contested to this day. The lines are hazy and the place is riddled with controversy regarding it’s purpose. Just one glance at the multiple ambiguous carvings will make your mind spin. It is said that construction commenced in 1456 by William Sinclair, the 1st Earl of Caithness. This Holy Place became a Catholic Church and was just one of the family’s three places of worship. However, in 1560 after the Scottish Reformation, it stopped being of the Roman Catholic faith. Following an inevitable string of events, the church became derelict, unkempt, and somewhat abandoned. Matters changed in 1842 when Queen Victoria graced the decaying ruins of the chapel. She sought solace in the divine and unwavering beauty of it and ordered the chapel be restored and resurrected. In 1862, the doors reopened. And so, the building became a place of Worship once more (this time under the Scottish Episcopal Church). 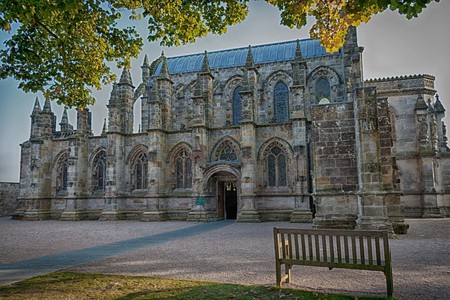 Gaze At The Apprentice Pillar

Rosslyn is comprised of leviathan stone pillars — fourteen to be exact — which stand to form twelve impressive pointed arches. The Master Pillar and the Journeyman Pillar are wonderfully fascinating and yet, they can’t even hold a candle to the infamous Apprentice Pillar. According to popular legend and folklore, this pillar is the work of an 18th century master mason’s apprentice. The master ventured far to draw inspiration before his work was to commence. However, upon returning home, the master was overcome with a ferocious fit of fury — his apprentice had carved a masterpiece without him. The monstrous rage continued and resulted in the master mason murdering his poor apprentice with a mallet. The story goes that the master’s face was strategically carved facing the pillar so that his eyes had to stare at it for all of eternity. The moral of the story? Jealousy is a sin. Either way, this pillar is an exquisite sight for sore eyes and the intricate stonemasonry work is undoubtedly demanding of being decoded. 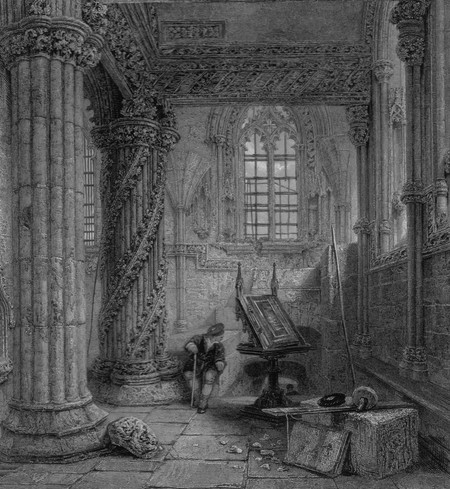 Pontificate Over The Crypt

The Rosslyn Chapel crypt may be the Sinclair family burial place but it’s also a major source of contention and intrigue for many. Is there more than meets the eye to this particular resting land? For instance, many think that this underground maze holds the mummified head of Jesus Christ. To thicken the plot, others are equally as convinced that the Holy Grail is a shining light hidden amongst the dark shadows of this mysterious crypt. Additionally, some people are believe that the original crown jewels of Scotland reside under this sacred chapel. And then again, there are those who simply opt for the notion that the treasure of the Templars exists here. Amidst the speculations, pontifications, and theories, the matter of the fact remains that the vault is shut. It has been that way for years. Perhaps, one day, the truth will reveal itself. Until then, one can only wonder.

As you walk into Rosslyn Chapel, an overpowering sense of wonderment and intrigue cloaks the people who have just set foot inside. It’s true that even the heavenly display of carvings are so impressive that they captivate the soul. These carvings are comprised of finely detailed and ambiguous patterns, many of which protrude from the impressive pillars. For years, scholars, visitors, and theorists alike have all desperately tried to decipher the hidden codes that stare from the stone walls. So far, the majority of speculations have been devoid of cold, hard, facts. That aside, visitors should be on the look out for over 110 little ‘Green Men’ who frequent this Holy haven. These men are not green in colour. Rather, they are carved in a way which displays significant amounts of greenery encapsulating them and sprouting out from their mouths. 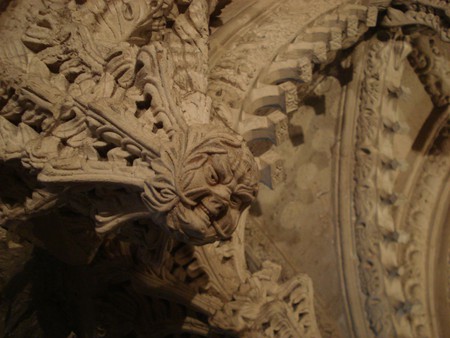 At the centre of the mystery rests the supposed link of Rosslyn Chapel with the Knights Templar, Holy Grail, and the Freemasons. At the end of the day, there is no denying the alluring aspects surrounding the theories. However, do bear in mind that these theories are widely disregarded amongst certain scholars. Dan Brown’s 2003 novel turned film The Da Vinci Code is undoubtedly responsible for making minds reel and also rocketing these irresistable theories into popular culture. Many believe that Sinclair himself (the man who built the chapel) was one of the Grand Masters of the Scottish stonemasons.

Another convincing factor in the theories is that the chapel is riddled with Templar symbols and signs. Just one example would be the Seal of the Knights Templar and the symbol, which rests upon it: ‘two riders on a single horse’. So go on, look around and sift through the carvings, symbols, and signs with a fine-toothed comb. Who knows? You may find the answers standing right in front of you. 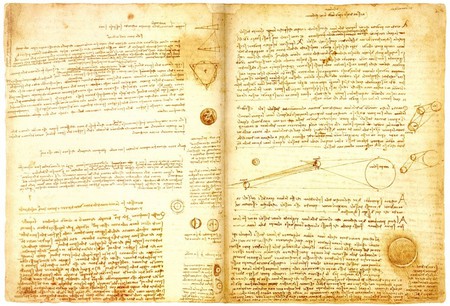