‘Crocuses bolt through snow, a new foal / spills into a blear of warmth and raw, / but all the birds he ever knew by name, / lapwings and finches, pintails, the several larks, / are flitting away to the light of a different world’. Here we are in John Burnside’s latest collection of poetry Still Life with Feeding Snake, where nothing stays still for very long and every image wrought onto the page is alight with life and movement.

Born in Dunfermline in 1955, Burnside grew up in the shadow of an abusive, alcoholic father in a Catholic household. An experience which informed earlier works like A Lie About My Father, a memoir about his childhood, and Waking Up in Toytown, the story of his demise into alcoholism and madness (while pursuing a suburban existence in Surrey, no less). In his more recent works – Something Like Happy, I Put a Spell on You and, now Ashland and Vine – the sense of darkness and unease has given way to a glimmer of real contentedness, and hope. While his fiction has charted a recovery into life, John Burnside’s poetry has always focused on what is beyond our reach.

In ‘Notes Towards An Ending’, from his T.S. Eliot Prize-winning collection Black Cat Bone (2011), he writes –

It’s never what we wanted, everafter;
we asked for something else, a lifelong Reich
of unexpected gifts and dolce vita,
peach-blossom smudging the glass

There is a feline quality to his imagery, which curls around the subject rather than squatting on the point. His digressive manner is what makes him so enjoyable to listen to, and his novels so enjoyable to read. The way he uses imagery in poetry is sharply focused to serve his argument, yet always allows the reader the space to come to their own conclusions. 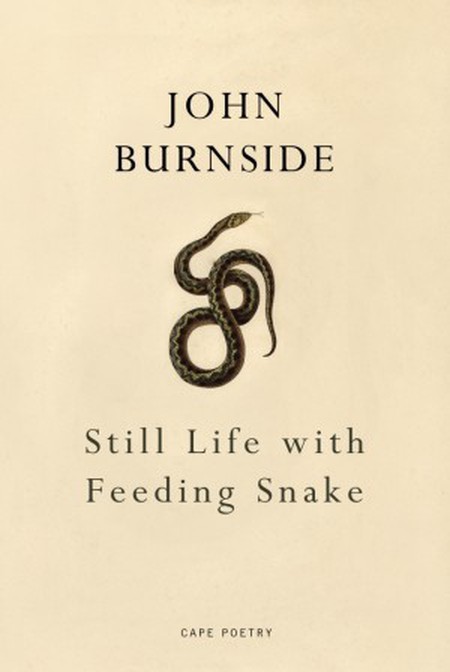 His signature style and themes are present in his latest work Still Life with Feeding Snake, along with a dose of humour. While striving to capture the ephemeral in a way that is as Keatsian as any Ode on a Grecian Urn, Burnside also offers very real moments of human life. He is at his most masterful when contemplating the unremarked-upon moments of daily life, and Still Life with Feeding Snake is full of gorgeous imagery.

The opening poem ‘The Beauty of Nature and the Wonders of the World We Live In’ sets a heady precedent for the rest of the collection, telling the story of a blind man who receives his sight, only to be made disappointed by the ugliness of the world. He occasionally wears a makeshift blindfold so he may have the darkness back. Gradually, he comes to terms with his surroundings, and ‘all the wonder in this world / that he can bear, not / well, but well enough.’ The unnatural syntax here embodies that tension between wonder and reality, an idea that comes to feed the entire collection. In this poem Burnside also finds room to explore his relationship with God, evoking memories of childhood and deftly laying bare his whole religious quandary in three lines. He remembers Sister Veronica at school:

No poem lovely
as a tree, she said
(though I’d never once thought to compare)

The narrative voice throughout the collection is prominent as well. The speaker alternates between active first person and omniscient observer, between personal memory and the imagination, to depict moments that are universally recognisable yet distinctly his. All the while the energy of story is contained, though not restrained, by crafted stanzas. ‘Still Life with Feeding Snake’ depicts the tension between a husband (an artist) and a wife who interrupts his work to show him a feasting snake. With exchanges so precisely rendered, the poem could pass for a Raymond Carver short story, were it not for its conclusion – the point where Burnside moves beyond observation to something richer:

They stood a moment, silent, not together;
and then, without speaking,
she walked into the house,
and he went back
to gravity and light.

Burnside blends words the way a baker kneads dough – he rolls them up, scrunches them together, stretches a string of them to breaking point then folds them into each other to create something else entirely, all the while never moving from that same meditative spot where a little flour has been sprinkled across the table. ‘Some mate for life, like swans, and fold / immediately to bedrock monochrome’ he writes in ‘First Exercise in Abandonment’, allowing the verse to enact its own structural kind of onomatopoeia. ‘For us, the only narrative / is crimson’ taking a standard romantic trope and leading the reader elsewhere, ‘swift and imperceptible, / as wings are, when they flicker at the skin / then hurry on, beneath a darkening sky.’

Indeed, alongside marital and familial love, the collection examines nostalgia and memory through the lens of desire. In ‘Annunciation in Grey and Black’, the speaker watches a woman mopping the floor at an airport: ‘night at the edge of the world, where nothing sings’ he begins, ‘the silted airport gloom, filming her hands like some ersatz account of sainthood’. This unremarkable scene immediately transforms into a bedrock of meaning as she notices the speaker: ‘sees me right down to the bone of lust and hurt.’

In ‘Approaching Sixty’, the speaker watches as an unknown woman unclasps her hair in a busy café, and assesses himself against that moment, attempting to reconcile longing with the passing of time. Again, humour is deftly fused with the poetic, so that the speaker can be both ‘striving to seem a comfortable kind / of scarecrow’ and also ‘one of those / who knows what beauty is / and lingers on the ache, / to stay alive.’ As he told me in an interview: ‘Exploring those little moments, those kind of passing moments, trivial in the kind of flow of things, compared to, you know, the crises happening in your marriage or your job, at that moment, this little flirtation of it, passing exchange over it, should be, you know, nothing. Somehow they can make all the difference.’

It is the remembrance of beauty — or something less crassly named then that — that lies ultimately at the heart of this collection: saving small moments of significance in the midst of, in spite of or because of, violence, indifference and passing of the world around us. ‘For years I was lost in the details’, Burnside writes in the ‘Memories of a Non Existent Childhood’, but he is master of them now. A soulful and meditative collection, Still Life with Feeding Snake is already a 2017 literary highlight.

Listen below to John Burnside reciting ‘Annunciation in Grey and Black’: