Peter Doig: The Return Of The Unreal

Scottish-born artist Peter Doig has been, for more than a decade now, part of an elite roster of contemporary artists credited with the ‘revival of painting’ in the 21st century after it had been declared a ‘dead medium’ by many critics and art theorists since the 1960’s. Federico Rosa explores this modern artist’s career and the development of his extraordinary painting process. 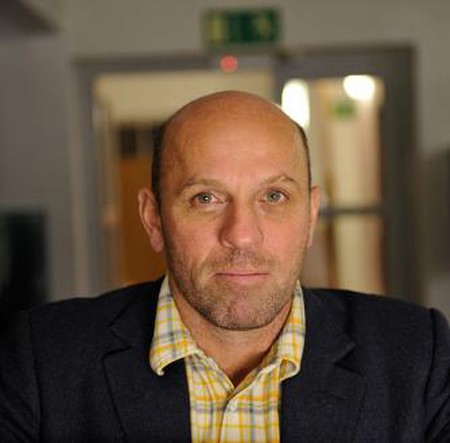 Peter Doig’s loose, unfinished technique, visual attachment to memory, use of popular culture references, result in epic, magical-realist images that have a profound sense of nostalgia and the fantastic. His inclusion in the Saatchi Gallery’s exhibition The Triumph of Painting (2005), not only cemented his reputation as a highly influential artist, he also became one of the most influential painters of his generation. In addition, the sale of his painting White Canoe in 2007, sold for an estimated £7 million, was the highest price paid at an auction for a work by a living European artist at the time.

Born in Edinburgh in 1962, Doig has lived a peripatetic lifestyle, moving with his family from Trinidad to Canada, before arriving in London 1979 to pursue an art degree at Wimbledon School of Art, and later at The Chelsea College of Art and Design. The origins of his painting practice can obviously be traced back to the English tradition of landscape greats such as William H. M. Turner and John Constable. The landscapes and cultures of Canada and Trinindad, however, seem to constantly influence Doig, as canoes, rivers, snow covered trees, and brooding forests and jungles permeate his composite imagery. Doig often bases his compositions on photographs, as he works around the basic structure, while allowing his own painterly language transform the image from a factual source of information, into a vantage point: a gateway into the timeless and complex structure of narrative. It does not, he insists, have much to do with the reality or veracity of a photograph or even the malleability of memory. It is a way to invent narratives, and the material directs the image’s progress. 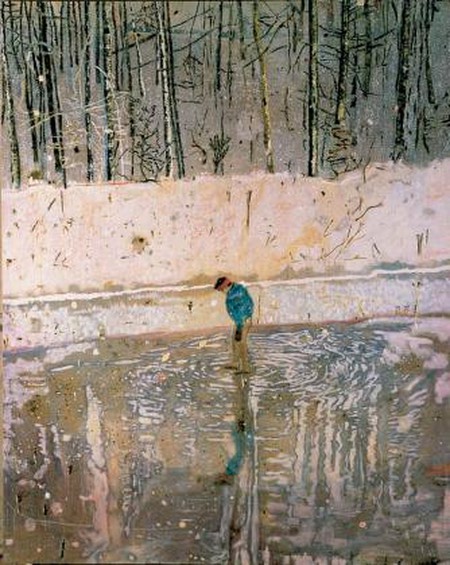 One of his signature pieces, Blotter, is a clear example of this complex methodology. It is a painting based on a photograph. His brother is standing on a frozen pond, staring at his own reflection. The blot in the lake is a mirrored image: a strange, lonely apparition. Doig has stated that:

‘The title refers to (amongst other things) the notion of one’s being absorbed into a place or landscape, and to the process through which the painting developed: soaking paint into the canvas’.

The blotter is the maker, the process, and the subject of the work, at the same time that it refers back to the viewer. Painting in this occasion, then, is not merely an object to be deeply contemplated, but an active device of creation for the viewer, who must invent his own narrative.

The Architect’s Home in the Ravine, by contrast, establishes architecture as the subject of the painting. The building, a solid structure, is not easily visible through the branches, and organic material; it seems as though hidden or protected from our voyeuristic gaze. The sense of being hidden, and the dark colors of the palette give the snow-covered branches an almost eerie, ghostly quality of luminescence. The house is engulfed by the landscape and also our gaze, as it tries to retreat from both. It is precisely this transition, from mundane object to magical story, from homely to uncanny, that Doig manages to achieve in his paintings almost at will. Perhaps it may be argued this is true of all great painting or art, but Doig does it not by rendering his subjects grandiose, but by rendering them obsolete. 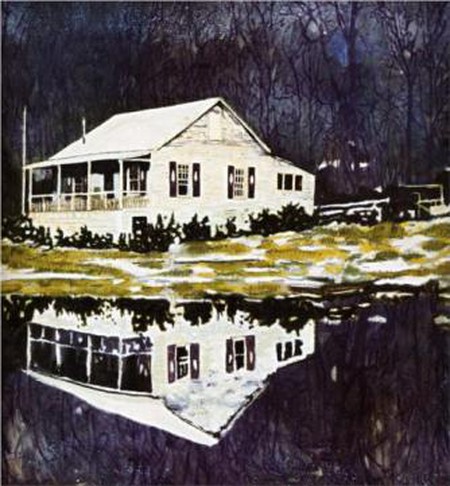 A similar feeling of the uncanny can be felt in Camp Forestia, where an apparently innocuous house sits on a lake. The house in the forest is gradually felt as desolate, shrouded by a brooding mass of twines, branches, and dark sky, its white glow almost instantaneously strange. The sense of the fantastic is enhanced by the mirror image of the house reflected on the lake, a doppelganger of the landscape above. Doig augments this sensation by avoiding the use of ‘correct’ linear perspective that should be reflected (and thus distorted) on the surface of the water. Hence, a twin house, an impossible reflection appears: is this the double of the house? The implications of the double are multi-faceted and vast. Jorge Luis Borges, for instance, repeatedly stated his fear of mirrors, and their ability to reproduce the fallibility of mankind. They were outlawed objects in some of his stories. Similarly, Doig here reminds us of the fallibility of images: they will always be an imperfect copy of something else.

100 Years Ago establishes Doig within the tradition of European Landscape painters, most notably the expressionist Edward Munch, romantics Caspar David Friedrich, and the symbolist Arnold Böcklin. Not surprisingly, in a classic post-modern trope, Doig appropriates an album cover as the source for his image, yet places it within a fantasy landscape narrative that oscillates between Böcklin’s own Isle of the Dead of 1886, in which the famous mythological island of the recently deceased is depicted as a phantasmagoric universe, seen from afar, and the not-so-grandiose story of a lonely hippy idling on a canoe. In regards to this ambivalence, Doig has stated of his paintings that: 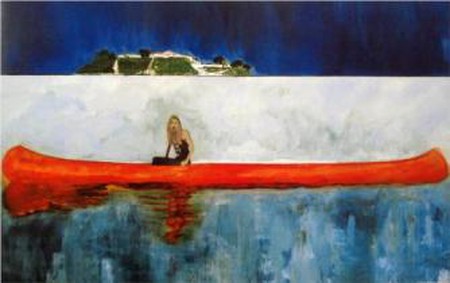 ‘[People] often say that my paintings remind them of particular scenes from films or certain passages from books, but I think it’s a different thing altogether. There is something more primal about painting…there is something quite basic about them [the paintings], which inevitably is to do with their materiality. They are totally non-linguistic. There is no textual support to what you are seeing…I am trying to create something that is questionable, something that is difficult if not impossible, to put into words’.

If his paintings are non-linguistic, or at least resistant to interpretation, then we can only arrive at notions or possibilities of meaning, constantly shifting perceptions that help us not arrive at a particular destination, but that, like the man in the canoe, seem to be drifting to a place where meaning has no value at all. Ultimately, Doig’s painting is introspective, aimed at an anti-language, something that precedes words, while utilizing things very familiar to us, such as landscape painting, family photographs, or films. The language of introspection is personal and difficult to communicate; our best attempts at this definition might be “nostalgic”, which seems a rather simplistic notion of memory and emotion.

Doig’s painting seems to start, however, once this familiarity recedes from our perception.