Mountain Biking in the Scottish Highlands: The Witch’s Trails and Top Chief

This black-graded trail, reached by a gondola, heads down Aonach Mòr – one of Britain’s highest mountains. It’s a rush, rattling down single-track dirt paths and elevated boardwalks and over bare rock, gravel and earth.

Deep in the Scottish Highlands, an adrenaline-spiking bike trail has brave cyclists shooting past gorse and ferns, leaping over humps and winding past valley views and woodland. There are technical sections, including an optional drop, steep descents and rough bedrock, before the trail opens up further down. It’s a 600m (1,970ft) descent across 3.5 km (2.2mi) – and you’ll be gasping by the time you emerge back at the gondola base. 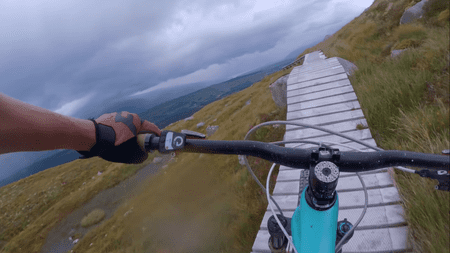 Top Chief is part of the Witch’s Trails, a network of routes that drops from the rugged hillside into Leanachan Forest. This is Nevis Range, just east of Ben Nevis, which at 1,345m (4,413ft) is Britain’s highest mountain.

The nine trails offer a range of experiences – Broomstick, Blue Adder and Voodoo are all blue (moderate difficulty), while World Champs and Wild Goat are red (difficult). Black Chief is black (severe), along with Black Crane and Cackle, while experienced riders seeking real speed could try the orange-graded World Cup Downhill – the UK’s only track to host the World Cup Downhill race.

How to tackle Big Chief

The Witch’s Trails are near Fort William, which has good facilities for visitors and is connected by train to cities across the UK (it’s also a stop on the sleeper service from London).

The lower trails are open year-round, but in winter snow carpets the mountain and the higher routes become part of Nevis Range Ski Area, with the gondola only open to skiers and snowboarders.

There’s parking, bike hire and showers at the bottom of the gondola, and you can eat at the Pinemarten Cafe (at the base) or the Snowgoose (at the top).