Land, Sea and Skye: Embracing Wild and Creative Cuisine on the Scottish Island 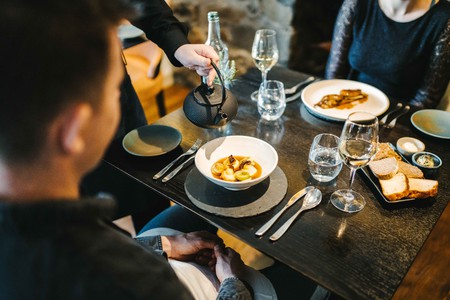 When it comes to destination dining in the UK, there are numerous bucket-list restaurants in picturesque locations – and then there’s The Three Chimneys on the Scottish Isle of Skye. Head chef Scott Davies explains how the landscape and natural produce of Skye have inspired his culinary work.

Skye feels like it’s perched at the end of the world itself, such is the sense of isolation and natural beauty here. But this windswept island also has a thriving food scene, focusing heavily on local produce, traditional livestock breeds, and foraging for natural ingredients. One figure who champions this return to Skye’s culinary roots is chef Scott Davies.

When Davies took the helm at The Three Chimneys restaurant as head chef in 2015, it had already received its fair share of accolades. Since opening in 1985 the restaurant had earned an entry in the World’s 50 Best Restaurants awards (ranked 28 in the world by Restaurant magazine in 2002) and a Michelin star, but in addition to the prestige Davies also inherited the challenges of running a kitchen here: namely the unpredictably wild weather and the need to rely on local suppliers. 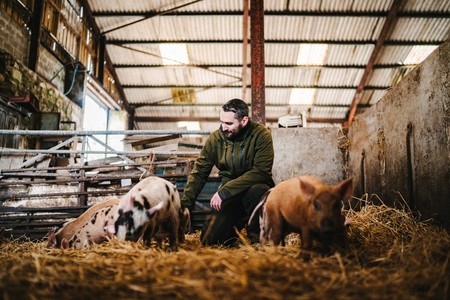 Traditional livestock breeds are among the draws of Skye. | Courtesy of The Wee Hotel Company / The Three Chimneys

“I had worked rurally before when I was head chef; you pick up the phone and you speak to big suppliers and just say ‘this, this, this’. So, for me it was completely different,” Davies says, sipping coffee in the kitchen of one of his most important producers. Keith Jackson, from Orbost Farm, is located just five miles (eight kilometres) from the restaurant; he raises native-breed sheep, cows, and pigs and supplies The Three Chimneys with much of their meat, including wild venison from the windswept hills of Skye.

Jackson’s own culinary story starts at The Three Chimneys; in his youth he was working as a pot-washer and overheard the chefs lamenting the lack of high-quality venison and the glimmer of an idea was born. Fast-forward to 2016, and Jackson was knocking on the new head chef’s door; no longer a pot washer but the owner of Orbost Farm. 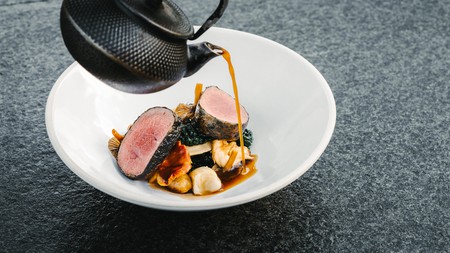 Provenance and precision are integral to the menu. | Courtesy of The Wee Hotel Company / The Three Chimneys 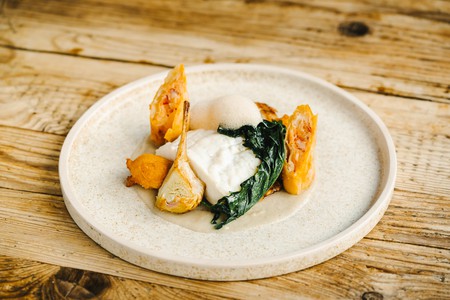 Flavour combinations are created from the isle’s local produce. | Courtesy of The Wee Hotel Company / The Three Chimneys

“It was kind of a goal for a long time,” says Jackson. “I knew my produce was good enough for them [The Three Chimneys] but it was a matter of convincing them.” Once Davies knew Orbost Farm had enough stock to commit to supplying the restaurant, however, it turned out he needed little convincing; using traditional breeds gives a taste that’s very different to the norm. “It’s how beef used to taste 20 to 25 years ago,” Davies enthuses. “It’s a very different product to commercial beef,” agrees Jackson. Similarly, the sheep that provide the lamb are a Soay breed, which are smaller than commercial breeds but much more intense in flavour (and also available year-round) and the iron-age pigs are crossbred with wild boars, making for a robust pork.

Apart from Orbost Farm, The Three Chimneys source the majority of its supplies from Skye via (very) local producers and crofters, including Isle of Skye Smokehouse, Isle of Skye Sea Salt, Sconser Scallops, The Oyster Shed, Skye Free Range Eggs, and Wild Skye Foraging, among others. The Isle of Skye Sea Salt is particularly notable in that it’s produced in an environmentally responsible way, hand-harvested in as pure a manner as possible: via polytunnels beside Loch Snizort, exposed to as much sun available so that the crystals form naturally. “I knew about that product a year before I came up [to Skye],” says Davies. “I was a judge on a Scottish food board and this product came up. It’s a Mediterranean way of getting the salt, so obviously they do this in Italy, the South of France… but this is the only place in Scotland that does it like this. It’s full of natural minerals.” 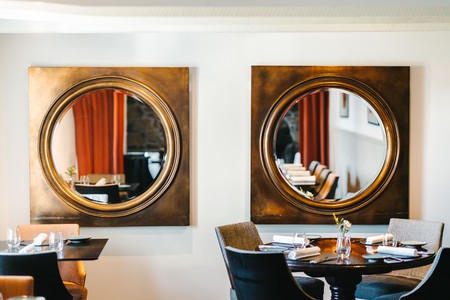 But it was the Orbost Farm partnership that proved crucial in the evolution of The Three Chimneys’ dining experience, giving Davies the confidence to make more broader changes to the menu, leading the restaurant in a new direction. His skills in the kitchen are a combination of lessons learned from some of his previous mentors; he has worked in Australia under chef Scott Pickett, and thanks to his 2013 stint as a runner-up on UK cooking competition Masterchef, he’s also had the honour of working at two-Michelin star restaurant Sat Bains and with Italian restaurateur Massimo Bottura. But he also draws heavy inspiration from Skye itself, the traditional ways of living and cooking on this remote island.

“It stems from how the cows are – the natural way of grazing and farming,” Davies says of his decision to evoke Skye’s landscape in his food, as well as getting back to nature with some of the ingredients used. “We never used red or white wine [back in the old days of cooking], we used bramble, elderberry; I made a change to use more fruit wines. Two years ago, we paired the beef with snails and wild garlic and wild herbs and it was a natural marriage for the menu.” 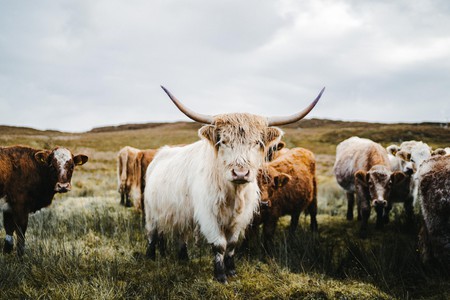 The natural way of grazing and farming led to culinary inspiration. | Courtesy of The Wee Hotel Company / The Three Chimneys

Paying culinary homage to Skye isn’t without its challenges. Due to the rugged landscape, the meat here is particularly lean and intensely flavoured, and it’s taken Davies a while to get the ratio of the tougher braise cuts and prime cuts right in order to make use of the whole of the animal and reduce wastage (another key focus of the restaurant). “When we first started using Highland cattle,” he explains, “it was three or four years old and we found we could use rib-eye, sirloin, rump and fillet. Because it’s pretty much a wild product – it’s up on the hills, it’s running about, and the flavours are fantastic – we dropped it down to a year or 18 months. The flavour was still fantastic but we could use the topside, the silverside, the salmon cuts. We could use all these prime cuts because the flavour was still there and it was tender as well. We got the prime and the braise all in sync and it worked out really well.”

However, the journey wasn’t always easy. “I had to learn a lot. It’s such a shame when you look at the industry of chefs; a lot of chefs use only one or two cuts [of meat] and to get people learning along those lines [of using the whole animal] is difficult. It’s about being creative. To look at the whole animal and do four or five different cuts… cure it, smoke it, salt it… obviously there’s a lot more workload in it,” Davies says.

The rugged landscape of the Isle of Skye. | Courtesy of The Wee Hotel Company / The Three Chimneys

The workload has paid off for Davies, with The Three Chimneys maintaining its 3 AA rosettes under his stewardship, but also picking up the Editor’s Choice, Best Restaurant in the United Kingdom award in the 2018 edition of The Good Food Guide.

“I’d never been to Skye before,” Davies says. “But I knew it was world-famous, and knew what to expect from the seafood. It’s always sought after for its West Coast shellfish. When I was cooking and eating in [other parts of] Scotland and Wales, they were using the langoustines [from here].”

What makes the seafood so unique? He points to the Gulf Stream, which creates a mild oceanic climate as it intersects with the Atlantic Ocean. “It results in the vast number of different foods we get here: mussels, oysters, beautiful shellfish, langoustines, velvet crab, scallops. It creates a cleanliness in the water.” 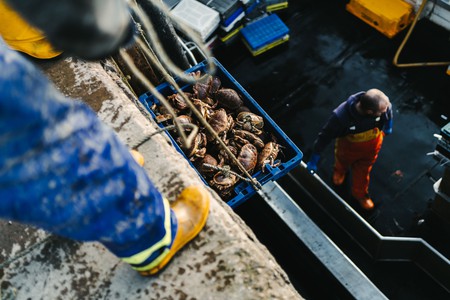 The isle is renowned for its seafood. | Courtesy of The Wee Hotel Company / The Three Chimneys 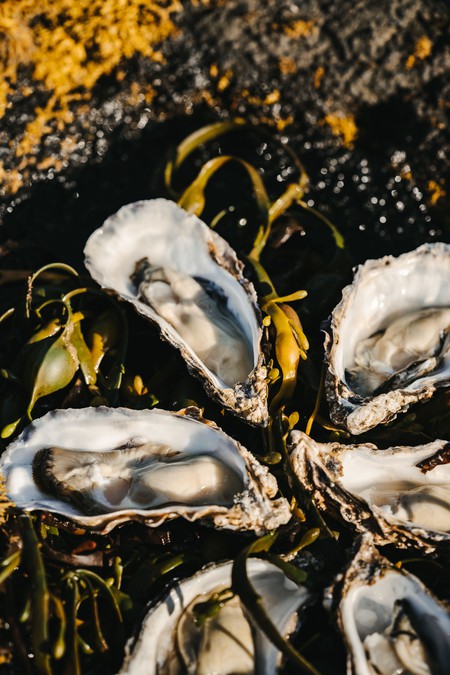 A mild oceanic climate creates a cleanliness in the water. | Courtesy of The Wee Hotel Company / The Three Chimneys

The incredible produce here – from both land and sea – is instrumental to The Three Chimneys’ distinctive cuisine; and, one assumes, to the restaurant’s success. “As a chef,” Davies says, “I’m just appreciating the high quality ingredients here. It transforms things from a good dish to a fantastic dish.”