How to Be a Dark Tourist in Edinburgh, Scotland 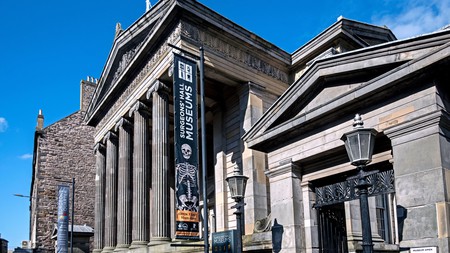 Climbed Arthur’s Seat? Explored local history at the National Museum of Scotland? Ticked a Loch Ness day trip off your bucket list? Great – now you have time to indulge your morbid curiosity in Edinburgh, the most haunted city in the UK.

Seal yourself in the haunted South Bridge vaults 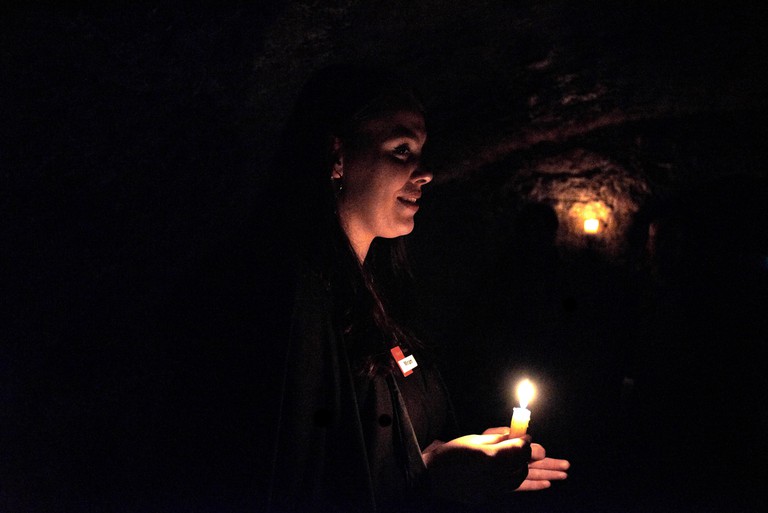 © Rik Hamilton / Alamy
South Bridge has been cursed since day one. As it neared completion in 1788, the city prepared an opening ceremony where the eldest local resident would be the first to cross it. Then, days beforehand, she died. A deal’s a deal though; the first person to cross South Bridge did so in a coffin, and ghost stories have plagued the vaults beneath ever since. Venture below, and you’ll also visit a catacomb so haunted it scared off a local Wiccan coven; to this day, a stone circle is on the floor, said to have trapped pure spiritual malevolence. Step in it if you’re feeling brave. 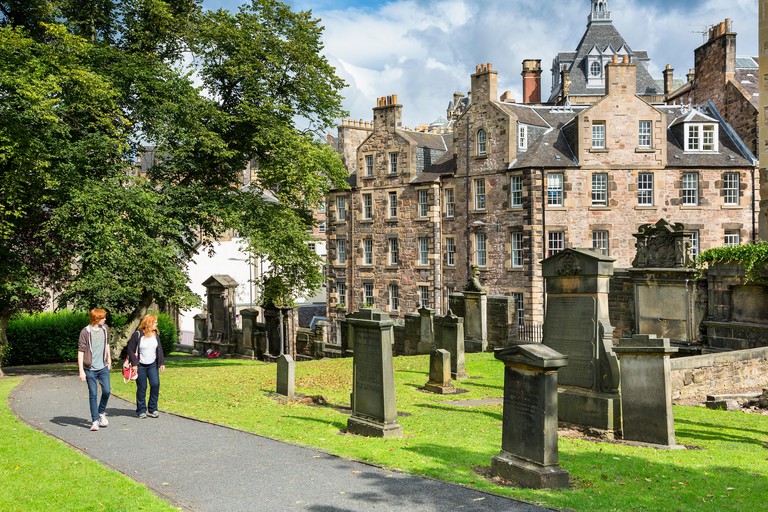 © JOHN KELLERMAN / Alamy Stock Photo
Book Now
George Mackenzie was Lord Advocate during the 17th-century reign of Charles II of England. One of his key jobs was persecuting Presbyterian Covenanters, a Christian group who’d become an oppressed minority in Scotland. He incarcerated 1,200 beside Greyfriars Kirkyard, and many subsequently died from malnourishment or execution, earning Mackenzie his “Bloody” epithet. The old prison can still be seen from the cemetery today. Visit Mackenzie’s mausoleum while you’re here; desecration after desecration has led to it allegedly housing angry spirits, to the point of Edinburgh Council locking it up forever. You can still peek inside through some grates, though. Will what you see have a rational explanation? 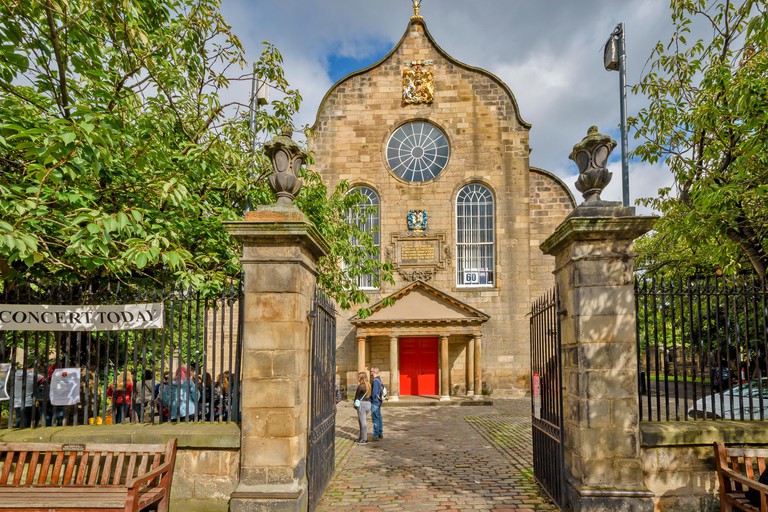 © JOHN BRACEGIRDLE / Alamy
David Rizzio was an Italian courtier and, more importantly in local history, a close confidante of Mary, Queen of Scots. From 1565 to 1567, Mary was married to Lord Darnley – an arrogant, abusive heir. She found solace in Rizzio throughout the partnership, incurring her husband’s jealousy. Rizzio was murdered by Darnley’s friend, Patrick Ruthven, on March 9, 1566, with Mary watching. He was stabbed 57 times. You can visit Rizzio’s grave to the right of the entrance to Canongate Kirk, with a plaque highlighting what’s otherwise a sadly unremarkable tomb. 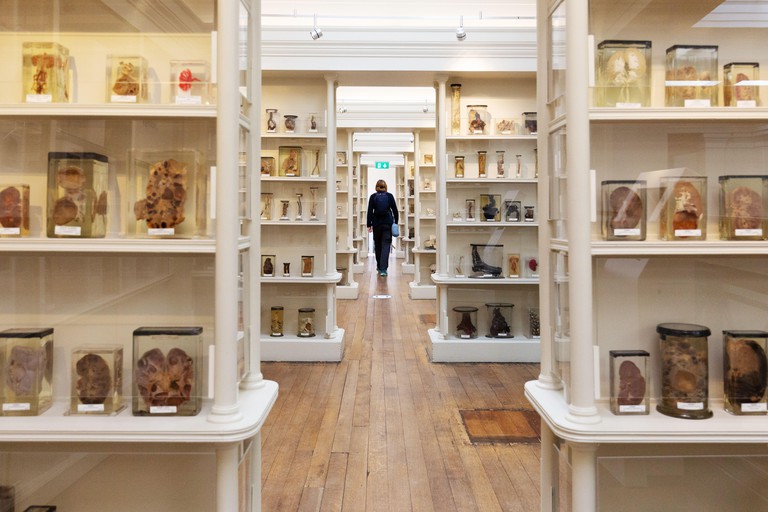 © Imagedoc / Alamy
The Surgeons’ Hall Museums are the most surprisingly messed-up spot in Edinburgh. They seem so innocent from the outside, promising a history of biology and surgery in Scotland. However, then you step inside and see the “specimens”: shrunken skeletons of children stand upright in glass cases next to graphic paintings of autopsies. There’s a corner dedicated to Burke and Hare, the Scottish serial killers who sold corpses to an anatomist for huge sums of cash. Darkest of all, though, is the Wohl Pathology Museum. Countless jars adorn the walls, each containing a preserved body part. Skulls, hands, feet, brains – all visible, mostly diseased, completely darkly captivating.

Have a drink beside the old gallows 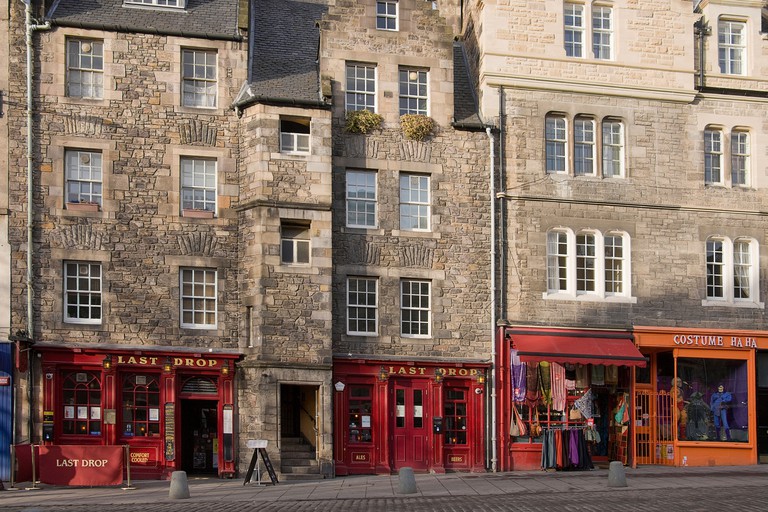 © Mark Pink / Alamy Stock Photo
In the shadow of Edinburgh Castle is Grassmarket, which, until 1784, was the site of the city gallows. More than 100 Covenanters were hanged there, but the most notorious “execution” was that of Maggie Dickson. She was hanged for murder in 1724 yet somehow survived, soon being found alive in her own coffin. Because she’d technically served her sentence, she was let go and lived another 40 years. Today, numerous bars overlook the old gallows. Maggie Dickson’s Pub is named after the “half-hanged” woman, but best for you dark tourists is the Last Drop. Here, the lights dangle from nooses – plus, the building’s supposedly haunted by a poltergeist.

Where to Stay in Edinburgh:

The Witchery by the Castle 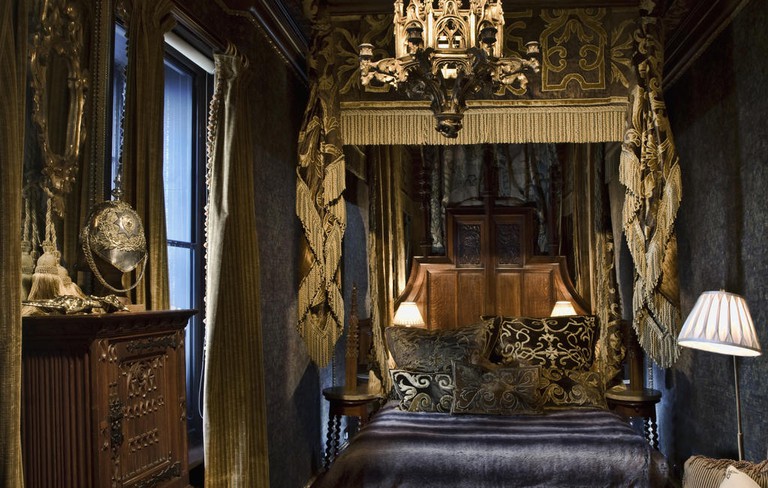 Courtesy of The Witchery by the Castle / Booking.com
Book Now
This nine-suite gothic boutique is less than a minute’s walk from Edinburgh Castle. It’s adjacent to the Esplanade, where hundreds of women were burned at the stake for practising witchcraft in the 16th and 17th centuries. If you’re not put off by that macabre backstory, both the rooms and the restaurant below epitomise classical luxury. Andrew Lloyd Webber once asked regarding the Witchery, “Is this the prettiest restaurant ever?” 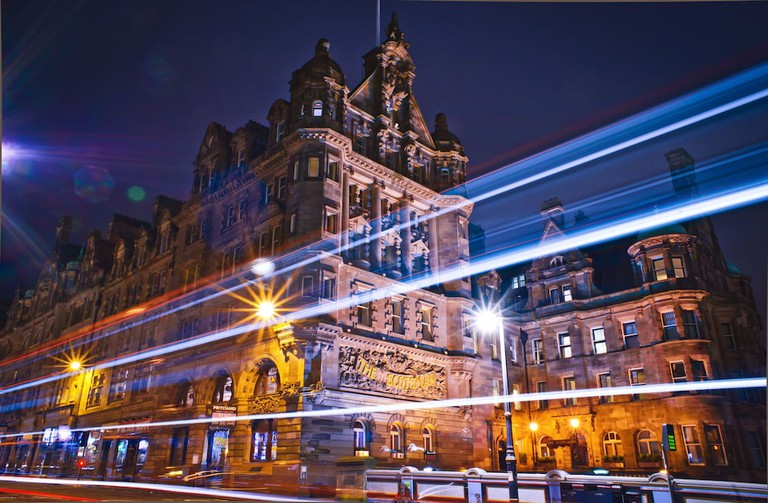 Courtesy of the Scotsman Hotel / Expedia
View Rooms
Price Drop
Now from $231 per night
This is another supposedly haunted stay, found within the very heart of the city. Before becoming a luxury hotel in 2001, this Victorian-era building on the North Bridge was the headquarters of the Scotsman newspaper for almost a century. Appropriately, then, some have claimed to hear ethereal typing sounds within the walls. Ghosts or not, every room and suite here is unique, each giving a slightly different panorama over Calton Hill and the Princes Street Gardens. There’s also a 48-seat cinema on site for you cinephiles.
More info 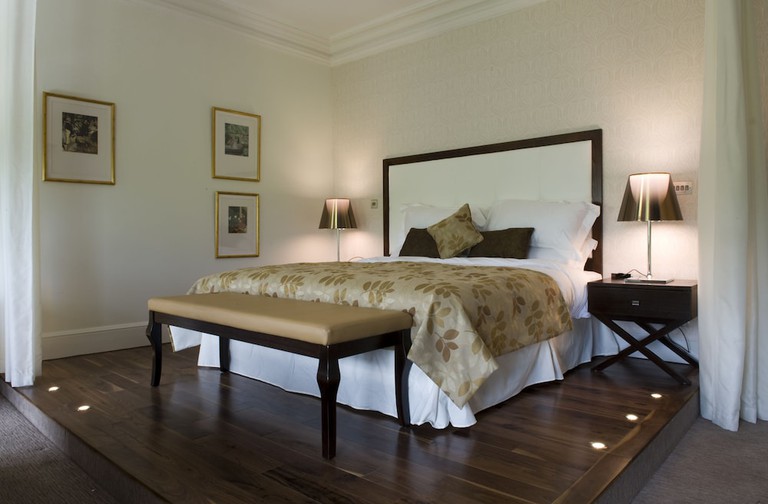 Courtesy of 21212
View Rooms
Price Drop
Now from $187 per night
There’s no spooky backstory or freaky apparition associated with this restaurant with rooms. However, 21212 blends historical design with opulence to create something that feels like it’s straight from The Shining. The building is a renovated Georgian townhouse with a hyper-stylish and Michelin-starred restaurant on the ground floor, lauded for creative recipes and a quirky, glass-fronted kitchen. Above, four bright ensuite rooms overlook the Firth of Forth. Each one juxtaposes lavish and vintage fabrics with a sleek, modern design.
More info 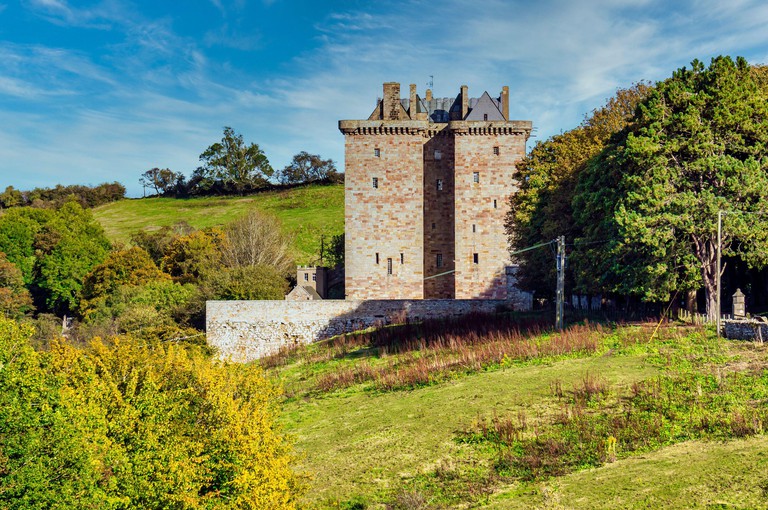 © John Peter Photography / Alamy
About 30 minutes south of central Edinburgh is Borthwick, the best-preserved Medieval castle in all of Scotland. It was built in 1430 to be an imposing fortress but, today, functions as a joint events venue and hotel. The 12 rooms here are all unique, each dedicated to a historical figure with a connection to the castle, from Oliver Cromwell to Sir Walter Scott. What they share, though, is historical decor guaranteed to make you feel like a noble. From the exposed brick to the looming oil paintings, the 15th century will never feel more alive.
Give us feedback