How This New Statue is Helping the Homeless in Glasgow 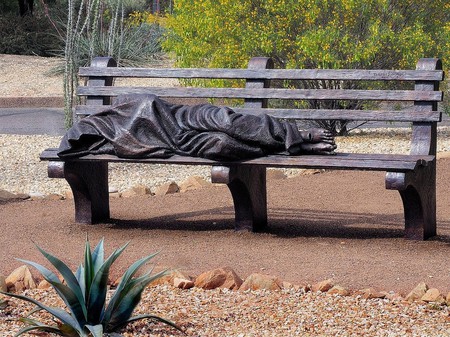 There are over 300,000 homeless people in Britain today, and around 34,000 who are homeless in Scotland. In the cold midst of Glasgow, it can be a tough time for those who are homeless, facing the chills and with little or no shelter or warmth to step into.

The world-famous statue depicting a homeless man said to be a representation of Jesus made by Canadian artist, Timothy Schmalz, has been placed in Glasgow at Nelson Mandela Place near Glasgow’s St George’s Tron Church. The statue has been placed there with the hope that it will raise awareness of homelessness, and many churches and charity representatives are supporting the statue’s presence in the city to highlight the plight of all those suffering without a home of their own.

There had been castings of the lifelike statue that were created and sent to destinations around the world since 2013; however, there have been many churches who have refused to display it due to engraved wounds on the feet of the statue, which appear to be a representation of Jesus. 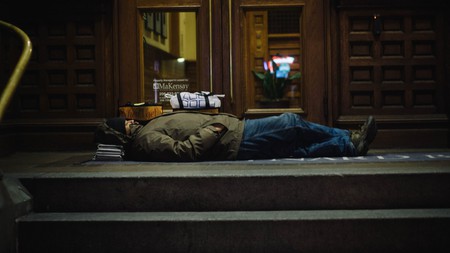 Scottish artist Peter Howson, a recipient of an Order of the British Empire honour in 2009, also created a painting to go alongside the statue and stated that he hoped that the statue and painting would ‘aid in awareness whilst highlighting the plight of the homeless, and homelessness issue’. The message behind the statue is to highlight the importance of caring for the homeless and that it could be any one of us that is made homeless at any time. Howson further stated that: ‘I wanted to ensure that his face remained anonymous to highlight that this figure (although Jesus) could, in fact, be any one of us, at any given time’.

Homelessness is a growing problem not only in Glasgow, but in the UK as a whole, and more initiatives need to be created in order to help those who are homeless and freezing out the winter cold. There are many charities that fundraise for the homeless and provide shelter and accommodation through an application system, but the next time you see a homeless person on the street, stop and think about the fact that this could be you or one of your family members. The statue aims to shed light on the plight of those who are homeless, and let them know that they are not alone.