How DC Thomson's Comics Put Dundee on the Map 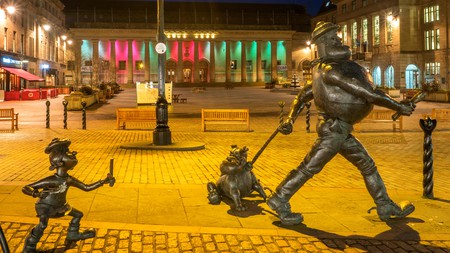 Some of the UK’s best-loved comic-book characters have come out of Dundee. Standing behind childhood icons such as Dennis the Menace is a company firmly rooted in this Scottish city on the east coast – DC Thomson. Culture Trip reports.

Visit Dundee, and you’ll notice a strange duo of statues on the high street: a swaggering, barrel-chested cowboy and a young girl with a slingshot. Desperate Dan and Minnie the Minx are among Dundee’s most famous exports – beloved characters brought to life on the pages of DC Thomson comics.

Today, DC Thomson is one of Dundee’s biggest employers. Its influence is stitched into the fabric of the city, from the 1960 edition of the Beano on display at the V&A Dundee to these statues on the high street. In 2018, the company celebrated the Beano’s 80th anniversary with a takeover of the McManus Galleries (rebranded McMenace).

The exhibition, with memorabilia and artwork from across the Beano’s history, drew in more than 100,000 visitors, making it the UK’s most popular comic exhibition of all time. Another popular DC Thomson character, Oor Wullie, has been immortalised in 200 decorated statues across five Scottish cities, with the scheme raising almost £1.3m for children’s charities. It’s clear that DC Thomson, and the comics it produces, is as relevant today as it ever was.

“Dundee’s always been a creative place,” says Chris Murray, professor of comics studies at the University of Dundee and the author of Comicsopolis, a forthcoming book tracing the history of Dundee’s comics. Murray is well-versed in the circumstances that brought the Beano and the Dandy to readers.

Established in 1905, DC Thomson was one of Dundee’s three Js – jute, jam and journalism – that generated the city’s wealth in the 19th and early 20th centuries. Today, it’s the only one of the three industries to have survived. The artists who worked on these comics have gone on to become some of the most influential in the genre; DC Thomson’s alumni include Grant Morrison (best known for his work on DC Comics such as Batman) and Watchman co-creator Dave Gibbons.

However, the Dundee comic didn’t exactly have a joyous start. In 1879, the Tay Rail Bridge disaster caused the deaths of 75 train passengers, which sparked a clamour for information beyond the written word. Publisher John Leng (whose company eventually merged with DC Thomson) invested in technology that allowed him to embed images in his newspapers. “Every paper with an image – be it a photo or a cartoon – instantly sold out,” says Murray. “Suddenly, there was a massive upswell in work for cartoonists and comic artists.”

These first comics consisted of detailed images with large blocks of text underneath, but the 1930s ushered in a more dynamic American style, with fast-paced action and text in speech bubbles. DC Thomson launched Oor Wullie and the Broons as comic strips in 1936, following with the Dandy in 1937 and the Beano in 1938. Their popularity exploded, and at the 1950s peak, the Dandy and the Beano sold 2m copies each per week.

“Growing up, I was surrounded by comics,” says Murray. “We’d get the Sunday Post and read Oor Wullie and the Broons; my uncle always had a copy of the Broons in the bathroom.”

As well as providing entertainment, the comics also set many like Murray on their future career paths. “I hear from a lot of people who read the comics when they were growing up and are now studying illustration at university, because they loved them so much,” says Alexandria Turner, editor-in-chief of kids’ magazines and comics at DC Thomson Media.

The joy of the comics lie in their characters: the mischievous Dennis the Menace, the oddball gang of the Bash Street Kids, and the friendly giant of a cowboy, Desperate Dan. They’re universally loved across generations; yet, as the firm itself, are inextricably entwined with the city of their birth. “The Bash Street Kids was inspired by the high school across from the office,” Turner explains. “Our comic artists would look over at Dundee High School and use the kids in the playground as inspiration.”

One of Murray’s favourite characters is the Amazing Mr X, a home-grown superhero who featured in a short-lived strip in the Dandy. “It’s the epic grandeur of the superhero, but it’s also really Dundonian,” he says. “In one panel Mr X is scaling a jute mill; in the next, he hunts a stag and leaves it on someone’s doorstep as a reward for doing a good deed. One of my greatest fan memories is of working with archivists and being able to hold the original artwork – incredible.”

According to Turner, the characters’ timelessness is the secret to their longevity. “We aim them at kids, but they’re trusted and loved by parents and grandparents too,” she says. “Technology is in there, but it doesn’t play a central role in their lives. Dennis plays computer games now, but then he’ll get a bit bored and want to get up to his usual mischief.”

The digital age is often touted as a threat to DC Thomson’s supremacy, as print media sales decline worldwide. Surprisingly, Turner’s answer to this is more real-world visibility, not less. “We make sure we regularly see people,” she says. “Our war comic, Commando, has loyal fans, so we go to a lot of military events – the Defend Fife WWII Festival and others. We also go to Comic Con – we’re very much out and about.”

The company has also expanded its range of products, which includes totes, mugs, board games and annuals – the latter proving popular with older collectors. It seems to be working. “What I love about our fan mail,” Turner says, “is that we actually get fan mail – that is, letters, not emails. We get drawings every week from kids who love everything about these comics.”

There has, however, been a move into the digital realm, which will ensure the characters’ survival if their print run ends. Dennis and Gnasher Unleashed is now on Netflix after getting its start on CBBC, while Beano.com provides online games. “The games are the equivalent of the free gift you used to get with the magazine,” says Murray. “I think there will always be comics – but the way people encounter them will change.”

One thing that remains constant is the love that children have for these comics, and the nostalgia captured on their pages. “My grandfather worked at the printing press,” Murray says. “He’d come home late at night, sneak into the children’s bedrooms, and put the roasting-hot comics under their pillows. They would pretend to be asleep, but as soon as he went out, they were up, holding these still-hot comics.”