Glasgow's Best Craft Beers and Where to Drink Them 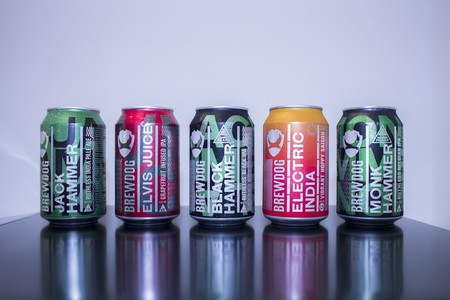 Scotland has no shortage of artisans dedicated to the pursuit of creating the perfect craft beer. With each sip, the all-encompassing yet independent flavours basking within craft brews are accentuated by the presence of signature aromas and distinct tastes. Embark on a cerebral-gastro excursion by drinking your way through Glasgow’s best craft beers.

Cafe, British
Facebook
Email
Twitter
Pinterest
Copy link
Share
Map View
Infused with innovation and craftsmanship, Jaw Brew launched with a bang in 2014 at the Glasgow Real Ale Festival. Based in Glasgow, this wee independent craft brewery is the brainchild of a husband and wife duo. Named after their home ‘The Jaw’, which also happens to be an ancient Scots word for ‘wave’ or ‘pouring of water’, Jaw Brew create magic using only the purest Scottish water and top of the line malt, hops and yeast. The award-winning, naturally cloudy Jaw Wave beer, with its hints of banana and spice, is a ‘yeasty’ Bavarian style weissbier suited to those who like their wheat beer lively and invigorating. Then again, the old faithful originals Drop and Drift are also strong contenders. Jaw Brew beverages can be found at The Glad Cafe, The Lismore and The Allison Arms, to name but a few.
Open In Google Maps
Glasgow, United Kingdom
Give us feedback

Whoever says unicorns don’t exist are lying. They do— in the form of the Shilling Brewing Co. Unicorn IPA. Full of a hoppy character, Unicorn IPA boasts a torrent of citrus flickers amidst steady malt tones, which are complimented by a sherbet swirl. Sipping on this spellbinding brew is made all the more enchanting by the well-decorated industrial swanky hip brewpub surrounds. Consider this beauty an unmitigated brewing playground that enables craft beer enthusiasts to sample every brew in sight, from its first steps to its final farewell.

A rare sight of the sun in glasgow bouncing off our gleaming taps and tanks. #thirsty #sunsoutbeersout #glasgow #drinklocal

All you could ever want, need, and desire in a local microbrewery, Clockwork Beer Co. is ahead of the brewing game. Brewed on site, the craft beers are sublime, especially the Cartside Red, a red ale with German malty punches, American hops and hints of toffee and berries; the Original Amber, a gloriously golden ale; and the Hampden Roar, a dark ale sporting five malts and bitter undercurrents. Those who like a liquid dessert should pay extra attention to It’s Not Terry’s, a rich bold chocolate orange stout with a citrus start and silky cocoa finish. The charming beer garden, wooden inside, unpretentious food and buzzing quiz nights only add to the allure of the craft beers.

A true cerebral feast resulting in sensory overload, Drygate Brewery is as cool as craft breweries come. As the first experiential craft brewery in the UK, the sky is the limit for the brew gurus at Drygate. The beer, which is as beautiful as the hip bottles designed by Glasgow School of Art creatives, is a taste bud adventure overflowing with stellar ingredients and innovative techniques. A fail-safe favourite and perfect match to surf and turf eats, the Outaspace Apple Ale will transport you to an alternate hoppy universe with its zest apple twang and signature aroma. The brewery tours are flawless, the furnishings hip and the food excellent.

The bright lights of the #fearlessfour On tap 7 days a week at the brewery & restaurant. #GlasgowBeer

Gastropub, Bar, Pub Grub, British, Fast Food, $$$
Facebook
Email
Twitter
Pinterest
Copy link
Share
Map View
Tried and true, Kelburn Brewing Company is a family run microbrewery with a penchant for traditional real ales. Passionate about brewing and dedicated to quality, it’s no surprise that this microbrewery boasts so many awards (including Champion Golden Beer Of Britain and Champion Beer Of Scotland). Although Cart Blanche and Jaguar can do no wrong, Dark Moor takes the crown with its sinfully smooth dark notes and post-taste touches of liquorice and blackcurrant. This multifaceted dark fruity ale was voted Champion Beer Of Scotland in 2014. Kelburn brews can be found at Blackfriars, Brel, Pot Still, Ben Nevis, Òran Mór and Cottiers, to name a few.
Open In Google Maps
36 Bell Street, Glasgow, Scotland, G1 1LG, United Kingdom
+441415525924
Visit Website
Give us feedback

A brilliant blend of Germany and Scotland, WEST Brewery is an artisan brewpub synonymous with endless banter and delicious traditional German eats. Separating the best from the rest, West is the only brewery in the UK to brew under Reinheisgebot, the German Purity Law 0f 1516. Named after Glasgow’s patron saint, St. Mungo (Wests’ flagship beer) is a refined traditional Bavarian ‘Helles’ lager with a crisp and malty personality. The Venetian Doge’s Palace-inspired home base makes the perfect setting for lazy Sundays and boozy catch-ups.

Enjoy your favourite beer at home! Use our WEST Beer App to find your nearest stockist of #StMungo wherever you live! Download for free from the App store. #mobileapp #westisbest