It’s easy to throw yourself into Edinburgh’s history. The Scottish capital’s mighty castle, tight Medieval alleyways, hidden vaults, handsome pubs and elegant Georgian squares mean you’re rarely far from an inspiring dose of the past. Wake up in the city’s gloriously Gothic Witchery, meanwhile, and you might feel as if you’ve actually travelled back in time.

The Witchery stands by the Royal Mile’s summit, just yards from Edinburgh Castle. It takes its name from nearby Castlehill, where hundreds of women accused of witchcraft were burned at the stake in the 16th and 17th centuries. 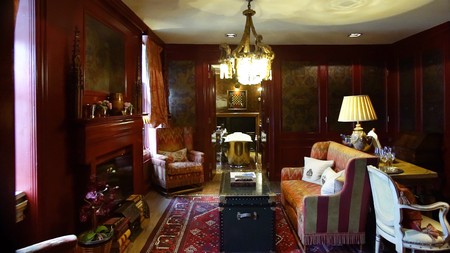 The main building dates from 1595, when it was home to a merchant named Thomas Lowthian. And since the 1970s its been home to a set of mind-bogglingly rich and ornate apartments where – if you’re willing to splash your cash – you can lay your head to rest on an ornate four-poster, surrounded by relics of the past.

Staying at The Witchery

The Witchery by the Castle was founded by chef James Thomson in 1979, with a high-end restaurant downstairs and rooms upstairs. There are now nine suites, both in the restaurant building and down Jollie’s Close, an alleyway (they’re called ‘wynds’ in Edinburgh’s Old Town) opposite.

The apartments are all different. The Vestry has red and gold Gothic decor, silk-upholstered rooms and a second-floor suite hidden up a stone turret stair. The Sempill’s paisley-lined walls open on to an antique leather-panelled sitting room and a crimson bedroom with velvet drapes and an oak four-poster bed. The Guardroom has views across the Old Town rooftops; a tapestry-hung bed; a marble-floored, oak-panelled bathroom; and a black and gold dining hall.

Wild decor in a wonder of the world

The remaining apartments – the Turret, the Library, the Armoury, the Heriot, the Old Rectory and the Inner Sanctum – are just as feverishly over the top. This unique set of rooms was described as one of the seven wonders of the hotel world by Cosmopolitan, and is about as far from the chic minimalism of many modern hotels as its possible to get. Chandeliers, statues, ornate tiles, massive antlers, smoky mirrors, cavalry helmets and rich tapestries jostle for attention – it’s a riot of past times.

The price of luxury

As you’d expect, this luxury doesn’t come cheap. The suites start at £395 for a double room, though that does include a chilled bottle of champagne on arrival and a breakfast hamper in bed (or a cooked breakfast in the restaurant). Old-school decadence comes in the form of huge traditional roll-top baths; modern convenience via subtly hidden TVs, plus wireless speakers and Wi-Fi. If you do take the plunge, it’s worth noting that The Witchery isn’t suitable for children, and as a historic building, doesn’t have great access for guests with mobility issues.

Dining at The Witchery

You can eat in The Witchery’s extravagant dining room or the airy linked Secret Garden whether you’re staying in the suites or not – though it’s worth booking in advance. The walls are oak-panelled, hung with tapestries and lit by candles, and there’s a phenomenal wine list, making it one of Edinburgh’s best places to get a taste of the high life. Scottish meat and seafood, including oysters, venison, eel and wild trout, dominate the menus, but there are also appealing vegetarian options and decadent desserts. The lunch menu is good value.

Edinburgh’s Old Town is right on your doorstep. The Royal Mile offers sights including the castle, the underground streets of The Real Mary King’s Close and the Palace of Holyroodhouse. Just down the hill are excellent pubs including The Bow Bar and the Jolly Judge, and if you roam further there’s wild nightlife on the Cowgate and almost-as-wild nature in craggy Holyrood Park.