Edinburgh’s Samhuinn Fire Festival and the Origins of Halloween 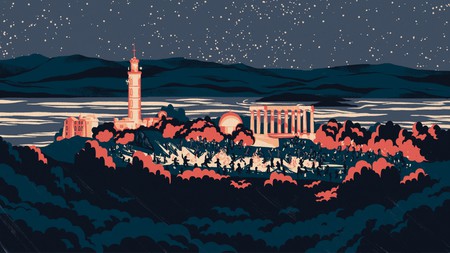 In the UK, Halloween is often thought of as an American import and celebrated as a secular holiday. However, how much of these costumed, candy-laden celebrations are actually ancient traditions?

On 31 October in the USA and parts of Europe, children and adults alike don costumes and celebrate Halloween with parties, treats and stories of ghosts and monsters. It’s often thought of as a modern-American secular holiday. However, the celebration dates back thousands of years to ancient Celtic traditions in Europe and the British Isles – traditions that are still practised in Edinburgh every year at the Samhuinn Fire Festival.

The Celtic people are normally associated with Ireland. However, Celtic tribes originated in and controlled much of northern Europe until wars with the Romans decimated them in the first century BC. The more easily defensible regions, now known as Scotland and Ireland, became a new homeland for the Celtic people after Hadrian’s Wall was built in AD 120, allowing Celts to thrive without the continued threat of Roman conquest. Relative peace allowed the Celtic culture to survive through the centuries, with some traditions persisting to the present day, such as the end-of-summer festival, Samhuinn, celebrated on 31 October or 1 November.

Samhuinn marked the beginning of winter when the world descended into darkness before being reborn in the spring. The ancient Celtic story ‘Tochmarc Emire’ (‘The Wooing of Emir’) mentions Samhuinn as the first of the four “quarter days” in the Medieval Irish calendar, so some scholars liken it to a New Year’s celebration.

It was certainly marked with revelry and preparation for a new year. Sacred cleansing bonfires, called Neid Fires, were lit, and farmers would pass their cattle between them to purify and bless them. All the fires in a village would be extinguished then relit by flames from the Neid Fire so that the sacred fire lived on in everyone’s lamps and hearths until the next Samhuinn. Mumming, a type of folk play, was used to tell traditional Samhuinn stories about battles or the winter goddess Cailleach (meaning “old hag”), who began winter by washing her hair in the whirlpool of Corryvreckan.

Divination was practised on Samhuinn to predict prosperity, marriage and death in the coming year. Common practices included making food with a ring or coin hidden inside, predicting marriage or wealth, respectively, for whoever found them. To foretell death, villagers might put their names on rocks and leave them in a graveyard, and whoever’s rock was missing in the morning had a dangerous – even deadly – year ahead of them.

Spirits were called upon because Samhuinn was a liminal time between our world and the Otherworld. It’s a night when the souls of dead loved ones as well as spirits and fairies – the aos sí in Irish mythology and aes sídhe or sìth in Scottish mythology – could come through to visit. Deceased family members were honoured with seats at the evening feast, and offerings of milk and baked goods were left at the front door for the fairies.

The sometimes tricky and dangerous aos sí were dealt with by guising – wearing disguises. People costumed themselves to either impersonate the aos sí so they could ask for treats and perform tricks while in disguise or so that they could hide from the aos sí and keep themselves safe for the next year. Turnips, potatoes and other vegetables were carved with grotesque and scary faces to warn away aos sí who might visit with malicious intent.

Today’s Halloween is a clear descendant of Samhuinn. Modern trick-or-treating is the most obvious surviving practice, though today’s costumes are rarely based on the aos sí. Carved turnips survived and became carved pumpkins when Irish colonists moved to the United States.

However, in Edinburgh, the Samhuinn Fire Festival persists, with the holiday’s old traditions in an annual spectacle of immersive theatre put on by the Beltane Fire Society. Over 400 performers and thousands of spectators gather on Edinburgh’s Calton Hill on 31 October to celebrate in the traditional Celtic ways.

Festivities begin with the purifying Neid Fire, which is still lit by creating friction between two pieces of wood. Honouring traditional stories of warfare and the aos sí, a theatrical battle between the armies of the Summer King and the Winter King takes place – marking the death of summer and the rise of winter. Performers bedecked in vibrant costumes clash all over Calton Hill. Spectators can move between the skirmishes to cheer as the Winter warriors gain ground over Summer until Cailleach raises the King of Winter and symbolically ushers in the winter season.

During the festival, drummers get stronger and more dynamic as Winter strengthens while fire dancers use torches lit by the Neid Fire to perform traditional dances. Visitors to the festival watch as the Summer King and Winter King discuss the fire’s purifying power to burn away the past and move into the future. Divination isn’t practised openly – there are no cakes with hidden coins – but some years feature performances that acknowledge it.

Tickets to the festival are available online at beltane.org starting in October. If you plan to go, get yours early because they will sell out, and there are no tickets at the door.