The Top 10 Restaurants In Edinburgh, Scotland 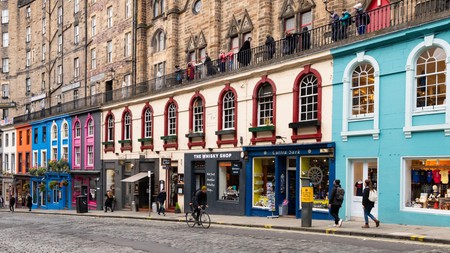 Immensely picturesque, the historic city of Edinburgh is not only one of the great European cities, but one of the great cities of the world. A city of great thinkers, writers, and architecture, Edinburgh is increasingly becoming known for its superb restaurants that make full use of Scotland’s best local produce. Here are ten of the best cultural restaurants in the Scottish capital. 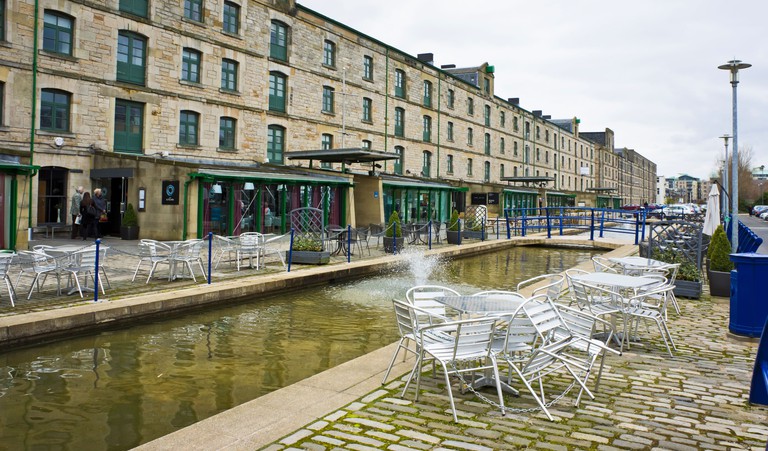 Commercial Quay in Leith with restaurants, shops and cafes along the street with The Kitchin far left. | © John Peter Photography / Alamy Stock Photo
The Kitchin is renowned as being one of Scotland’s most exciting restaurants, and head chef Tom Kitchin is recognised at one of the best young chefs at work today, lauded by the critics and restaurant guides and a regular on television. The Kitchin is located on the waterfront at Leith in the north of Edinburgh and was opened in 2006. The following year it was awarded a Michelin Star, before a ‘Best UK Restaurant’ and ‘Best Restaurant in Scotland’ came in 2011 and 2012. The notoriously fastidious critic A. A. Gill even gave The Kitchin five stars out of five. Tom Kitchin trained under French greats Alain Ducasse and Pierre Koffman, and the menu combines classic French techniques with Scottish produce – look out for Orkney scallops, Highland lamb, and Inverurie ox tongue on the à la carte menu.

21212 is situated in an immensely handsome Georgian terrace in the Royal Terrace close to Calton Hill, one of Edinburgh’s great landmarks. The terrace was built by the Greek Revival architect William Henry Playfair, the designer of many of the finest works in the New Town in the early 19th century. 21212 is run by chef Paul Kitching and has earned a Michelin Star, and curiously is set over four floors with a drawing room and many of the original period features still intact. The top floor drawing room provides diners with a superb view over the Firth of Forth as they sip on an aperitif. The cuisine is French but with an idiosyncratic approach to the menu; there are only ever three choices for each course but the choices will be shifted each week to keep up with the best ingredients available.

At The Balmoral Hotel on Princes Street stands Number One restaurant, perhaps the classiest and most sophisticated dining spot in all of Edinburgh. Number One has held a Michelin Star for over 10 years in a row now, and over the years has seen the likes of the Queen Mother, Sophia Loren and Elizabeth Taylor drop in. The Hotel itself dates back to 1902 and was one of the great railway hotels after Waverley Station was built, the clock tower is one of Edinburgh’s most recognisable landmarks. On the walls of Number One are artworks from The Royal College of Art, whilst the cuisine blends French and Scottish influences. Among the excellent dishes on offer are cured foie gras and confit duck, hand-dived scallops, and Borders roe deer with rainbow chard.

Restaurant, British, $$$
Facebook
Email
Twitter
Pinterest
Copy link
Share
The Grain Store is located in the winding alleys and labyrinthine passages of the Old Town and provides traditional Scottish fare freshly prepared on-site. Just a brief walk from Edinburgh Castle and the Royal Mile, The Grain Store features alcoves and archways that hint at the ancient foundations of Edinburgh. The cuisine on offer is classic Scottish fare, made using the best quality ingredients – expect lots of Highland beef, lamb from the hills of the Cheviots and the Lowlands, and fish fresh from the East and West coasts. Everything is served with freshly baked bread made that morning in the kitchens of The Grain Store. 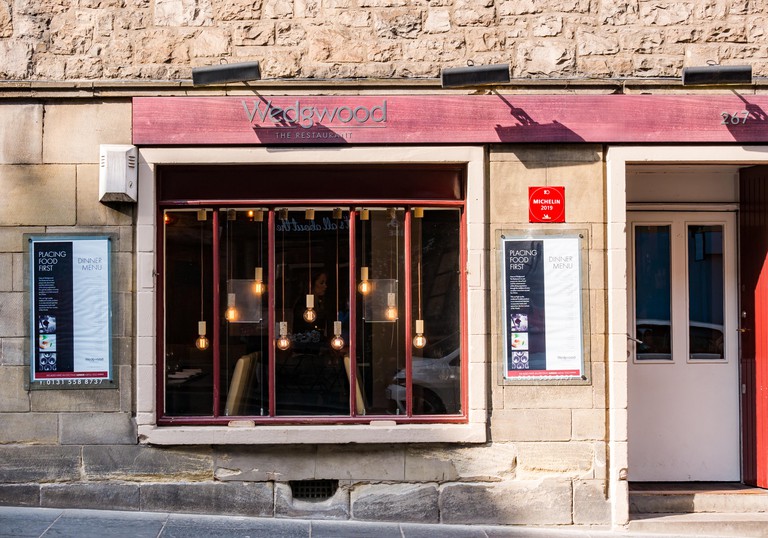 Front of Wedgwood fine dining restaurant, Royal Mile, Edinburgh, Scotland, UK | © Sally Anderson / Alamy Stock Photo
Wedgewood on Canongate in the centre of Edinburgh has an excellent reputation for providing a fine-dining experience. Run by Paul and Lisa Wedgwood, the menu places a strong emphasis on the quality of raw ingredients, with foraged salad leaves and herbs being supplied by zoologist Ben Robertson from the forests and river banks around Edinburgh. Chef Paul Wedgwood has previously worked in Michelin Starred kitchens in the Lake District. The menu at Wedgewood includes interesting dishes such as venison with haggis, mustard crusted lamb loin and Scottish beef fillet.

Brasserie, Restaurant, Bistro, Deli, British, Contemporary, French, European
Facebook
Email
Twitter
Pinterest
Copy link
Share
Martin Wishart is one of the biggest names in contemporary Scottish cooking. He has run Restaurant Martin Wishart (which won a Michelin Star), Martin Wishart at Loch Lomond, and his own cookery school where he continues to promote excellent Scottish produce and the very best French-inspired methods of preparation and techniques. The Honours was opened in 2011 as the latest venture by Wishart, named after ‘The Honours of Scotland’, the crown jewels of Scotland discovered by the great poet and historical novelist Sir Walter Scott. The menu focuses on Parisian brasserie-style cooking made with fresh and seasonal Scottish ingredients. Starters include seabream tartare and Continental charcuterie, and mains on offer include ox cheeks à la bourdelaise and rabbit à la moutarde.

Restaurant, British, Vegetarian, Vegan, $$$
Facebook
Email
Twitter
Pinterest
Copy link
Share
The Tower Restaurant is the brainchild of James Thomson, one of Scotland’s most successful restaurateurs and the driving force behind The Witchery by the Castle which opened in 1979 and has become one of Edinburgh’s leading restaurants. The Tower Restaurant was opened in 1998 as part of the new National Museum of Scotland and swiftly won accolades from the Michelin Guide, the Good Food Guide, and from critic A.A.Gill. Often frequented by politicians and celebrities, and ideal for lunching whilst perusing the Museum, the rooftop restaurant offers stunning views of the Castle. The menu is contemporary and strongly seasonal in style, with dishes such as marinated lemon chicken leg with chorizo and coriander salsa, and pork rillettes with black pudding and parsley butter.

The Ship on the Shore 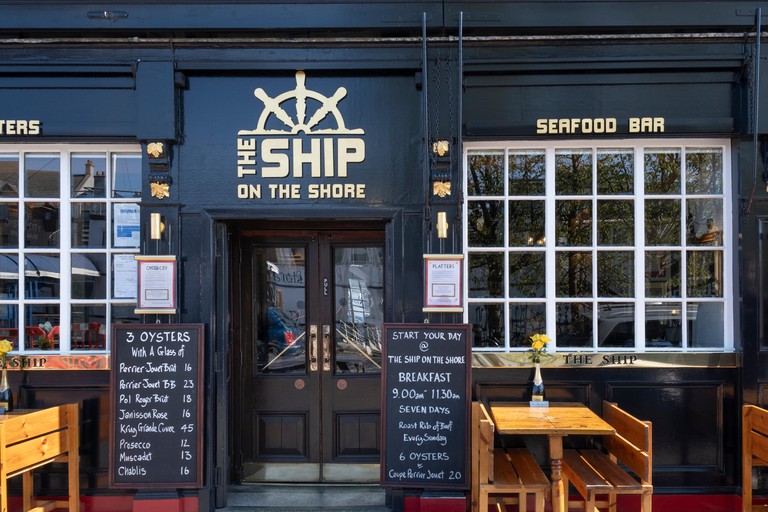 The Ship on the Shore Seafood Restaurant in Leith Edinburgh | © Clearview / Alamy Stock Photo
Put simply, The Ship on the Shore is a seafood restaurant and champagne bar in Leith, Edinburgh’s historic port – but it is also something a bit more than that. Located close to the Royal Yacht Britannica Museum, the restaurant aims to celebrate the extraordinarily rich seafood larder that the lochs and seas around the shores of Scotland provide. Part of the Sustainable Restaurant Association, The Ship on the Shore has been heartily recommended in The Guardian by none other than leading Edinburgh chef Tom Kitchin. There is a lunch menu, a dinner menu and a specialist mollusc and crustacea menu that features half a North Berwick lobster thermidor, a platter of mussels, and a half dozen oysters with champagne.
Give us feedback