The Best Edinburgh Bars To Cosy Up In This Christmas

Christmas in Edinburgh | ©Dominic Wade/Flickr
As winter sets in on Edinburgh and the Christmas Market frenzy begins, it’s time to figure out where you’re going to shelter from the wind, rain, hail, snow and enjoy a mug of mulled wine. Amidst the flood of new ‘cool’ bars, with their wide-open spaces and glass fronts, there’s still hope of finding a cosy bar to snuggle in, away from the elements in Scotland’s capital.
The Dome © This is Edinburgh/Flickr

Restaurant, Bar, Cafe, Market, Tea Room, Diner, Contemporary, European, British, $$$
The Dome offers several dining options | © Monica Wells / Alamy Stock Photo
The Dome, formerly a bank branch, is a hotel whose grandeur leaves little to be desired. The Christmas decorations are erected on the first of November and are easily the greatest in the city. A very short stroll from the Christmas Market in St Andrew’s Square, The Dome offers a setting of complete exclusivity even when there’s a queue out the door. The splendour of the interior will envelope your mind as you cosy in with an artisan cocktail, waiting for your coat to dry off.
More Info
Open In Google Maps
14 George Street, Edinburgh, Scotland, EH2 2PF, United Kingdom
+441316248624
Visit website
Visit Facebook page

Google Maps will aid you in discovering one of Edinburgh’s best cocktail bars, hidden in a Queen Street cellar. Bramble Bar’s decor is simplistic and convivial, with Victorian-style furniture and dimmed lighting. Enjoy the relaxed, and slightly sultry, atmosphere in Edinburgh’s worst kept secret. The cocktail menu includes an array of retro classics, as well as some experimental creations. Opt for the Earl of Grey to shake the chill in your bones.

Pub, Nightclub, Pub Grub, Wine, Beer, British, $$$
Listen To The Music | © Christiane Birr/Flickr
A pub that many describe as an ‘old man’s pub,’ The Royal Oak has neither airs, nor graces, replacing them instead with fascinating locals whose stories will captivate you all evening. There’s also live folk music from local musicians every night of the week. The cellars are said to be haunted, and not just by deceased punters. Legend has it that they were used by the murdering body snatchers, Burke and Hare. It’s one of the only vaults in the Old Town that won’t feel the fear of tourists on a ghost tour.
More Info
Open In Google Maps
1 Infirmary Street, Edinburgh, Scotland, EH1 1LT, United Kingdom
+441315572976
Visit website
Visit Facebook page

Bar, Pub, Restaurant, Contemporary, Pub Grub, British, $$$
The Shed At Blackbird | Courtesy Of Blackbird
The Blackbird has magically blended the perfect amount of hipster with an old-school boozer. The large windows lure passers-by in with soft lighting, exposed stonewalls, fireplaces and cornices. Upon entering, however, first impressions are dashed as punters are mystified by the subtle modern touches that adorn the bar, like their ‘Looking for Alice’ wall mural inspired by the characters from Lewis Carroll’s novels. This paradoxical theme of traditional vs. wacky is mirrored in the beers, wine and spirits list. Why not pair your visit to The Blackbird with a trip to the Cameo Picturehouse Cinema to watch some Christmas classics?
More Info
Open In Google Maps
37-39 Leven Street, Edinburgh, Scotland, EH3 9LH, United Kingdom
+441312282280
Visit website

Bar, Beer, $$$
The Hanging Bat has 20 beers on its draught list every day | Courtesy of The Hanging Bat
The Hanging Bat is ideal for beer enthusiasts, as this Lothian Road cove is considered Edinburgh’s HQ of craft beer. A utopia for those who geek out over hops, the small bar has a far-reaching assortment of saisons, ales, lambics, lagers, fruit beers, the list goes on. The beer selection is international, as are there measures — patrons sip their draughts from schooners (2/3 pint glasses) instead of pints, so as not to guzzle and dilute appreciation for the artistry behind the beer. The seemingly wholly wooden interior (rather sauna-like), small bar area and mezzanine level mean that as the bar fills up, the temperature hikes drastically — perfect for a winter’s evening. At the rear of the bar is the Alpha Project, a small brewing setup that regularly produces beer for the bar. They host regular tasting evenings as well as ‘Brewdays,’ giving you the chance to try your hand at the art of brewing. It is the ideal bar for pre-theatre drinks if you happen to have tickets for some of the Christmas shows at the Festival Theatre.
More Info
Open In Google Maps
133 Lothian Road, Edinburgh, Scotland, EH3 9AB, United Kingdom
+441312290759
Visit website
Visit Facebook page

An exceptional underground refuge in Edinburgh’s Old Town, The Jazz Bar is effortlessly cool. With an assorted mix of high-quality jazz music performed every night to keep boozers entertained, the atmosphere in this tiny bar is electric. Imagine rubbing shoulders with the greats of Art and Literature in Paris in the 1920s, surrounded by red velvet curtains, billowing bassists and bucket-like wine glasses: you’re in the Jazz Bar. They have regular drinks offers, perfect for a warming tipple before walking down the mound to enjoy the Christmas markets for the evening.

Bar, Cocktail Bar, Restaurant, Contemporary, Pub Grub, British, $$$
Whisky | © Joshua Rappeneker/Flickr
The Bon Vivant is Edinburgh’s leading after-hours cocktail stop. The food is phenomenal and ideal if there’s a group of you trying to huddle from the harsh outdoors. Alternatively, perhaps you’d rather warm yourself up with the tantalising alchemy cocktails on offer. Ask the mixologist for a Hennessy Smash — a cognac and strawberry cocktail served, bizarrely yet delightfully, in a half-pint tankard.
More Info
Open In Google Maps
55 Thistle Street, Edinburgh, Scotland, EH2 1DY, United Kingdom
+441312253275
Visit website

Bar, Pub Grub, British
The Brass Monkey on Drummond Street is an absolute delight. It offers the best in everything, from beers to spirits and traditional decor to movies. The Brass Monkey boasts a cinema in the back room, which is filled to the brim with Eastern-style cushions and beanbags. If you’re enticed by the sound of beers with friends while watching a movie, The Brass Monkey is where you need to be from 3pm onwards. Perhaps they’ll even show some Christmas films for those festive enthusiasts.
More Info
Open In Google Maps
14 Drummond Street, Edinburgh, Scotland, EH8 9TU, United Kingdom
+441315561961
Visit website
Visit Facebook page

This cosy and intimate German beerhouse could possibly be one of the smallest pubs in Edinburgh, but its beer list is certainly the largest. The beer menu is almost like a map of the world through beer: choose a country and take your pick of its best beer. If you’re indecisive, then you can pay £10 for a beer bucket containing five of the bartender’s favourite brews from around the world. Although recently redecorated, getting rid of the tired, old couches and large picnic benches, replacing them with comfy armchairs and Singer sewing machine tables, Brauhaus still has its same laid-back atmosphere. 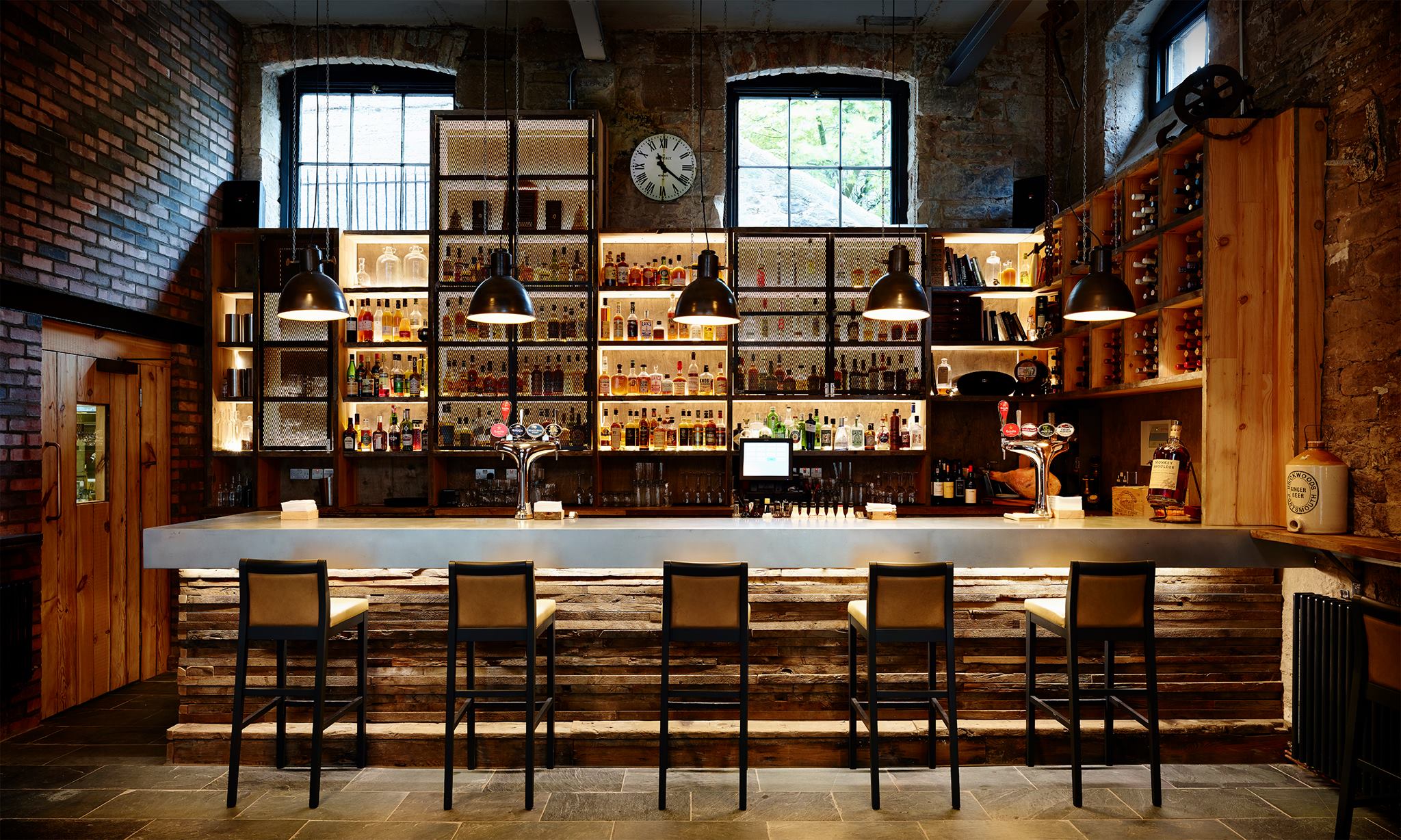 Bar, Restaurant, Wine, British, $$$
Courtesy of The Devil’s Advocate
The Devil’s Advocate is almost as atmospheric as the Old Town itself; it is actually a 16th-century house, built by a merchant called Clement Cor. Above the door, an inscription reads ‘spes altera vitae‘ (hope of another life), a delightful motto for this reborn house. Trundle down Advocates Close and escape the Royal Mile’s marching tourists and blistering cold, and settle in to this honey pot of delights.
More Info
Open In Google Maps
9 Advocate's Close, Edinburgh, Scotland, EH1 1ND, United Kingdom
+441312254465
Visit website
Visit Facebook page