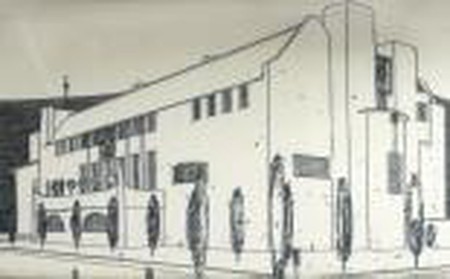 The career of the Scottish architect and designer Charles Rennie Mackintosh presents us with a series of paradoxes. He was one of the greats of 20th century design alongside Antoni Gaudí and Frank Lloyd Wright, but he died in obscurity; he was lauded on the Continent in his lifetime, but shunned in architect circles in his native Glasgow. Culture Trip looks at the light and shade of Scotland’s pioneering modernist designer. 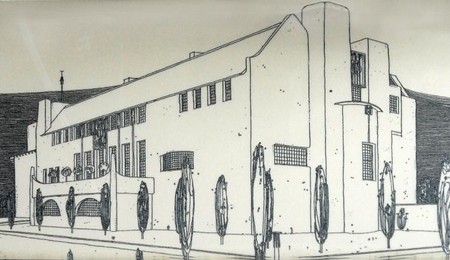 Mackintosh is often described as the leading British exponent of Art Nouveau. This is true, but fails to do justice to Mackintosh’s aesthetic range. As a whole his work does not comply with simple stylistic categories and is best characterised as displaying a uniquely eclectic vision that incorporates elements of Art Nouveau, the Anglo-Japanese style, and the Scots vernacular idiom. At times he anticipates the clean lines and functionalism of the great Modernists Mies van der Rohe, Walter Gropius and Le Corbusier.

To understand how progressive Mackintosh’s designs were, we have to consider the aesthetic landscape in which he worked. The 19th century had seen two dominant styles – the Gothic of Pugin and Gilbert Scott, with its Scottish variant the Baronial style, and Classicism. Classical buildings remained especially common in Scotland into the 1870s, particularly in Glasgow in the work of Alexander ‘Greek’ Thomson.

At the end of the 19th century these forms were overtaken by a mixture of new styles; in Glasgow the leading idiom of the 1890s and 1900s was the bombastic Baroque of Sir John James Burnet, a style used for public buildings across Edwardian Britain. Progressive designs for domestic buildings followed the asymmetrical, unaffected, almost quaint Arts and Crafts style, which advocated a return to traditionalism and a simpler way of life. 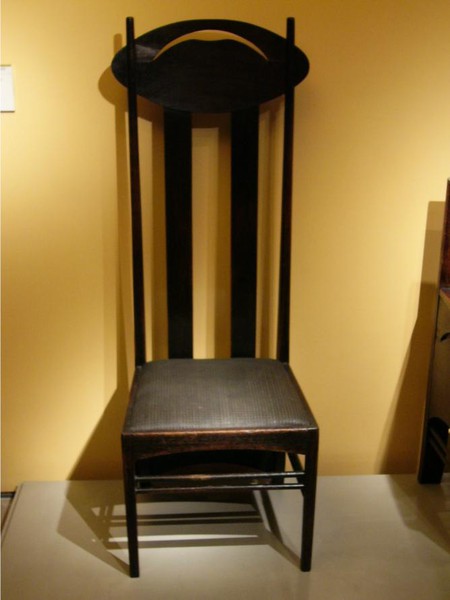 Other architects embraced eclecticism. James MacLaren, working in Scotland and London, created his own style with Arts and Crafts influences; in his Scottish designs he combined roughcast harling, crow-step gables and thatching to create a new Scots vernacular. His influence can be seen in Mackintosh’s designs for Windyhill and Hill House.

Mackintosh was a man apart, though, borrowing elements of vernacular design and ambitiously looking beyond Britain to the new Continental style of Art Nouveau. Although the very first Art Nouveau image was by an English designer – the 1883 cover of Wren’s City Churches by Arthur Mackmurdo – the style was distrusted in Britain and associated with decadence. The designs of Richard Harding Watt at Knutsford and the tile designs of W.J.Neatby for clients in Bristol, Norwich and London, were isolated instances of Art Nouveau in England.

Mackintosh was therefore one of the only designers in Britain to engage with Art Nouveau and use motifs such as flowing curvilinear ironwork and floral mouldings that were the standard repertoire of Continental designers such as Hector Guimard in Paris, Otto Wagner in Vienna, and the great architect of Brussels, Victor Horta.

Mackintosh was born in 1868 into a working-class Glasgow home. He was a pupil in the office of the architect John Hutchinson before becoming a draughtsman at Honeyman and Keppie in Glasgow in 1889. He became a partner in 1901 and produced some of his finest work for the firm. From 1883 to 1894 he attended the Glasgow School of Art where he met a group of fellow-minded young artists, including the sisters Frances and Margaret Macdonald, both of whom were interested in Art Nouveau, the Celtic Revival, Arts and Crafts design and Japonisme.

In 1895 Mackintosh produced his first architectural design, an addition of a corner tower with a swirling staircase to the Glasgow Herald building. Between then and 1910 Mackintosh enjoyed constant commissions and achieved European acclaim. 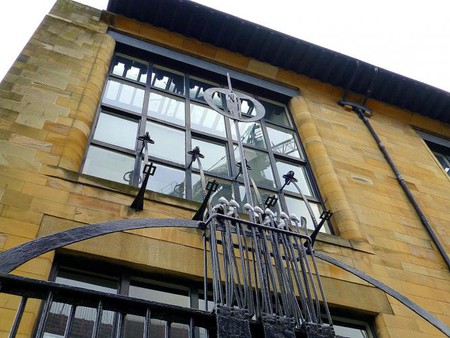 Honeyman and Keppie won a competition to design the new Glasgow School of Art in 1896 with plans by Mackintosh. Remarkably, the School was to be Mackintosh’s first major commission and would be his masterpiece. Containing studios and offices, the School was built in two stages, the eastern and central ranges between 1896 and 1899, and the western between 1907 and 1909.

In the heavy, rectilinear masses of masonry there is a nod to vernacular architecture, but the large machine-produced glass and iron windows that light the studios show Mackintosh utilising modern industrial techniques and materials from contemporary office design in Glasgow that was ultimately influenced by American buildings. 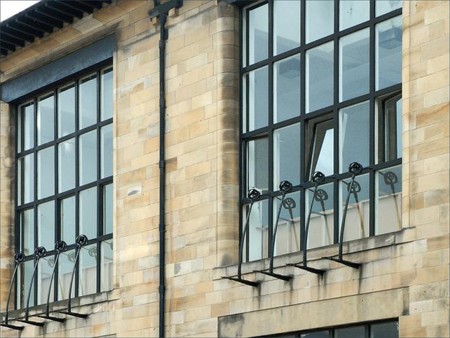 Along the main façade is an iron railing with an Art Nouveau archway and decorative moulded motifs over the doorway. There are floral motifs in wrought iron beneath the exterior windows, whilst floral and geometric Art Nouveau decorative motifs are worked into the fixtures, balusters, mantelpieces, bookcases and tables of the library. The interior was partly designed by Margaret Macdonald, Mackintosh’s wife from 1900 and collaborator on many of his interior designs.

During the construction of the School Mackintosh designed public schools and churches in Glasgow, and completed a commission for a dining-room for the Munich publisher Hugo Bruckmann. These commissions brought public interest – articles on Mackintosh appeared in The Studio in 1897 and in the German Dekorative Kunst in 1898.

He also provided designs for four tea-rooms in Glasgow owned by Kate Cranston. For the Buchanan Street rooms in 1897 he created Art Nouveau murals of ornate female figures surrounded by roses, and in 1900 for the Ingram Street rooms he designed a silver dining room with a similar frieze. His most complete tea-room design was for the Willow Tea-Rooms in 1903, which featured highly stylised organic motifs, panelling by Macdonald and irregular exterior planning by Mackintosh.

For the Argyle Street Tea-rooms in 1898, Mackintosh provided his most intriguing feature – his first high-backed chair, with tall uprights and oval headpiece with the silhouette of a bird in flight cut into it. The restrained, geometric shapes and ebonized finish points to the influence of the Japonisme of Edward Godwin and his furniture of the 1870s, only now transformed to create a remarkably simple design that had no precedent.

House for an Art Lover

In 1900 Mackintosh exhibited work at the Vienna Secession, the leading avant-garde event in the Austrian capital. Mackintosh enjoyed good relations with Austrian artists, especially the architect Josef Hoffmann. Soon after, in 1901 he entered a German competition for a Haus eines Kunstfreundes, or a ‘House for an Art Lover’. His design was disqualified for incompleteness but was published in Germany and exhibited in Turin, and earned Mackintosh a commission for a music-room for the Austrian arts patron Fritz Waerndorfer. The critic Herman Muthesius described the design as exhibiting, ‘an absolutely original character, unlike anything else known.’

The designs were for a large rectangular house, with two whitewashed facades. On each side were large Art Nouveau caryatids sculpted in sandstone, with interior decoration featuring huge curving tendril designs and murals. Mackintosh used harling on the house, or roughcast, a traditional Scottish material to protect against the northern climate. His willingness to borrow from vernacular architecture created a unique vision of modernity that combined traditional functionalism with high style. The house was built in Glasgow in 1996. 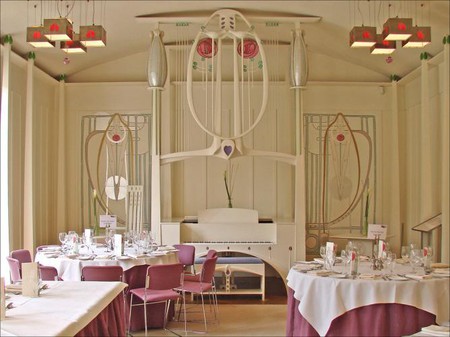 Detached middle-class houses in rural or suburban settings were standard works for progressive architects such as Voysey and Lutyens. Mackintosh designed several such houses between 1900 and 1905 – Windyhill in Kilmacolm in 1901, and Hous’hill for Kate Cranston in 1905. Between these designs he created Hill House at Helensburgh for the publisher Walter Blackie between 1902 and 1904. 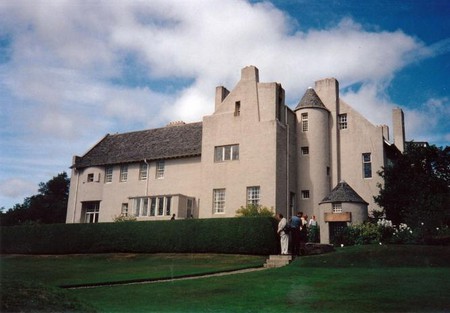 The exterior and interior of Hill House illustrate the two themes within Mackintosh’s designs. The exterior is bare, harled, brutal almost in its spare surfaces and vast colliding masses in a way that anticipates Le Corbusier and the concrete Brutalism of the 1960s. The prominent gables and conical-topped turrets, though, point to Baronial and vernacular design, whilst the interior features ornate, organic stencilled designs and coloured glass in light fittings and balusters. The ‘Hill House Chair’ that Mackintosh created developed that used at Argyle Street, now with a laddered back-piece topped with a geometric lattice design in the manner of Japanese design.

After completing the Glasgow School of Art in 1909 Mackintosh’s career went into decline, perhaps due to spells of drinking and depression. Leaving Honeyman and Keppie in 1913 to establish his own office, he received no commissions. With Macdonald he went to stay in Walberswick in Suffolk in 1914, only for Mackintosh to be reported to the authorities as a spy due to his thick accent and solitary wanderings along the coast.

Forced to move, they re-located to Chelsea, selling designs to textile manufacturers for small sums. Mackintosh produced one last design in 1915 for 78 Derngate, Northampton for W.J.Bassett-Lowke. The couple moved to Port Vendres in France in 1923, before Mackintosh returned to London for treatment for tongue cancer in 1927. He died there in December 1928.