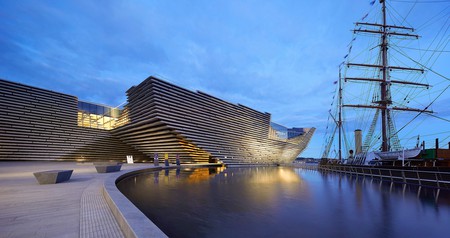 As the V&A Dundee is unveiled to the public, architect Kengo Kuma speaks to Culture Trip about the inspiration and motivation behind his incredible design.

The V&A Dundee, the city’s newest museum, sits on the bank of the River Tay. It’s an organic structure, which seems to change shape depending on the angle you view it from. From afar it resembles the solid, proud prow of a ship, while moving closer reveals a walkway hidden between two swells of the building, surrounded by water. Standing beside the RRS Discovery, the polar exploration ship that once carried Scott to the Antarctic, the V&A Dundee looks both startlingly modern and right at home. 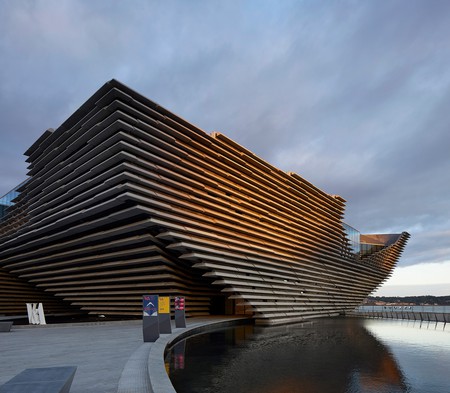 The architect responsible for this structure, which cost over £80 million and opened to the public on the 15 September 2018, is Kengo Kuma. With previous projects including the Great Bamboo Wall House in Beijing, and future works including Tokyo’s Olympic stadium for 2020, he beat out six others in 2010 to win the competition to design the V&A Dundee.

As part of the development promising regeneration to the city, the opening also marks the first time that the V&A has launched outside of London. However, it is far from just an outpost. The exhibits champion the history and future of Scottish design, and even the building itself echoes its surroundings. Kuma discusses how he took inspiration from Dundee’s existing architecture when designing the building. “As an exterior we used concrete; this is an homage to old buildings in Dundee. They use dark stone; I like the deep colour of those old buildings. We didn’t want to use aluminium or glass; it’s too shiny for the city. The concrete gave a rough texture – we washed it to expose the stone aggregate, and it looks very natural and very soft.” 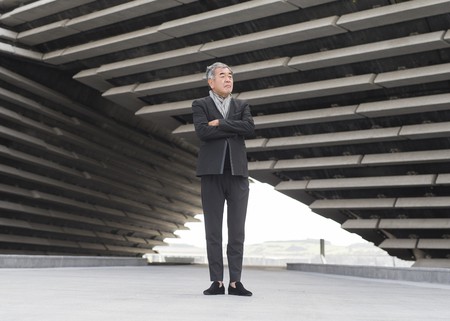 Inside, the museum is no less striking; slatted wood is stacked in sloping rows, with large windows flooding the hall with natural light. “For interiors, we wanted to add the warmth,” Kuma says. “This is why I used oak, and why I used the special details; oak has a natural resin, and it has the randomness and softness. We tried to avoid flat surfaces and repetition.”

However, construction was not without challenges. Kuma’s original plan involved a portion of the building jutting onto the River Tay, but this idea did not make it past the drawing board. “For practical reasons, because the water is so strong, we drew back into the land. The good thing about this final design is that we still have some part over the water, and we can achieve the integration of water and land. It has a hint of a sea cliff – a sea cliff is also sitting between the water and land. It is a conversation between nature and human. So, we tried to translate this to the building.” 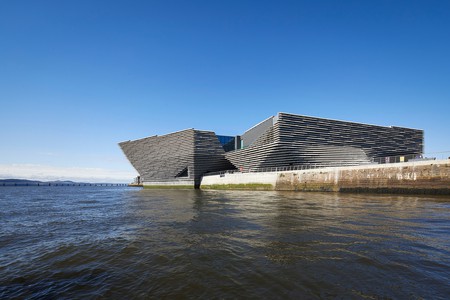 The harmony between architecture and nature is something that Kuma has prioritised. One of his favourite aspects of the building is the cave-like structure leading to the walkway, which invites the viewer to explore the curves of the museum and focuses the eye out onto the River Tay. “The cave acts as a magnet to draw visitors to the waterfront,” he says, adding that his own experiences in childhood inspired the structure. “When I was a boy, I played in natural caves; it was my favourite place.” 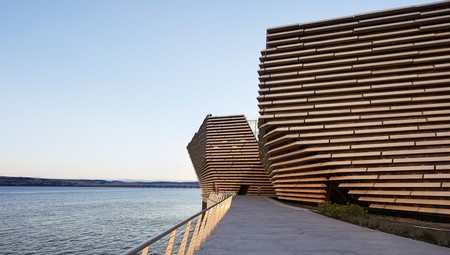 Honouring the symbiotic relationship between earth and water was important to Kuma for reasons other than aesthetics – namely, in order to link the museum to the history of the city. “Historically, Dundee and water are connected. The ocean was most important for the economy in Dundee. But in the 20th century, the ocean and Dundee separated. With this museum, Dundee can find the ocean again and that can change the city drastically, I believe.”

Kuma pays homage not only to the history of the city but also to one of Scotland’s greatest designers. “In the Scottish Design Gallery there is an oak room by Charles Rennie Mackintosh – I am a big fan, he is one of my heroes. He represents Scottish culture, and he has a love for nature, a love for wood. The oak room is the best example of his work. I am very happy to have it here in the museum.” 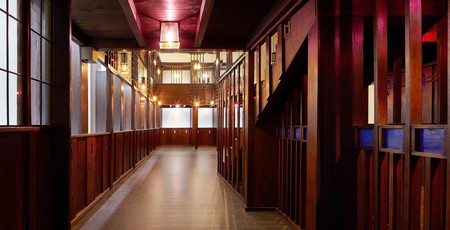 The oak tea room, which was formerly part of Mackintosh’s interiors for Miss Cranston’s Ingram Street Tea Rooms in Glasgow, is one of the most anticipated pieces in the V&A Dundee. It had been deconstructed and put into council storage but has now been pieced back together with immense care and dedication. It comes on display for the first time in 50 years in the same year as the Glasgow School of Art, also designed by Mackintosh and arguably his most famous work, was destroyed by fire. The tea room joins other items such as an Alexander McQueen gown, Beano comics and a winged diamond Cartier tiara as part of the museum’s permanent collection in the Scottish Design Gallery.

The foyer is striking not only because of its design, but also its size and prominence within the building. It was designed as a focal point of the museum and is much more than just an entry to the galleries. Kuma hopes the space will play a fundamental role in encouraging Dundonians to access the museum, which will be free to enter. “For the community, the use of this space is very important. The people of Dundee can use this space as their living room – they can have tea, meet with friends and spend time with family.” 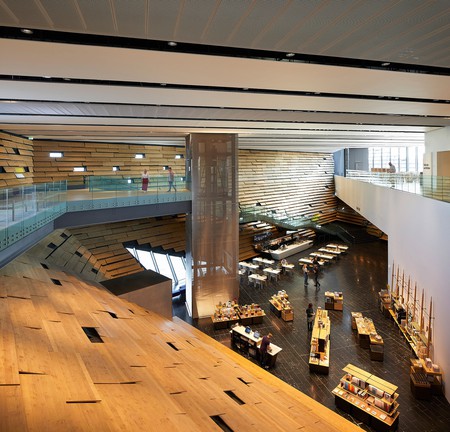 The community is firmly placed in the heart of the V&A Dundee – not only by the museum, which invited local community groups into the galleries before the official opening, but also by Kuma as the architect. “Many museums have art as the protagonist, but here, humans are the protagonists of the museum. This museum is not only for art lovers but should be a part of the community. It will change the life of the city.”