Mackintosh And The Glasgow School Of Art 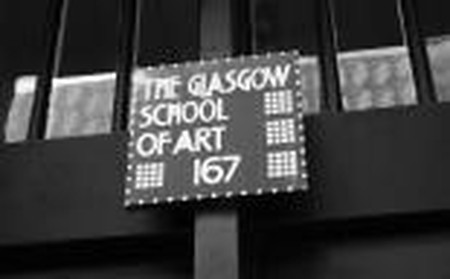 One of the few Art-Nouveau buildings in Glasgow, The Glasgow School of Art is widely considered the centre masterpiece of the Glasgow series of Charles Rennie Mackintosh buildings. Housing one of the world’s foremost institutions for the study of art and design, ‘The Mac’, as it’s affectionately known, still demonstrates a freshness of style and presents a fascinating insight into turn-of-the-century Modernism. 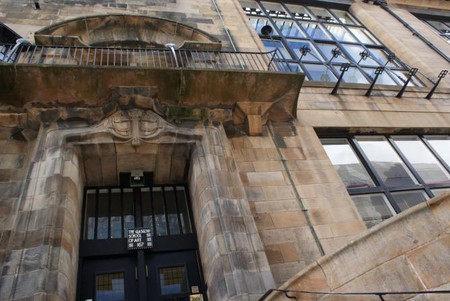 Situated on a steep hill leading down to Sauchiehall Street, The Mac’s main north-facing façade fronts Renfrew Street, at the top of Garnethill, in the Glasgow city centre. Top of most critics’ list of the most innovative structures ever built in the UK, it was once described by Sir Christopher Frayling, Rector of London’s Royal College of Art, as “the only art school in the world where the building is worthy of the subject…this is a work of art in which to make works of art.” 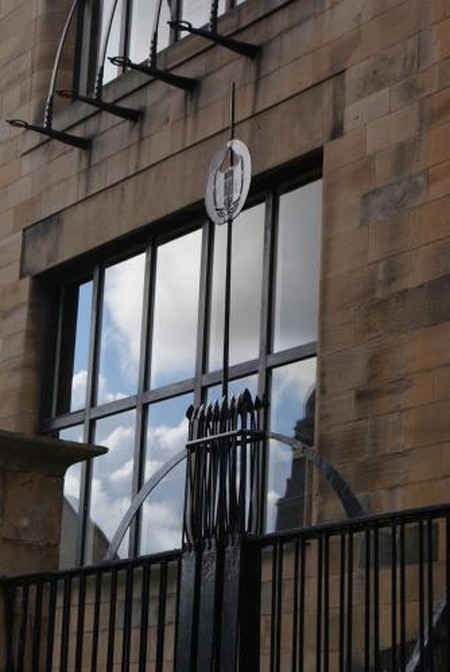 Displaying a style influenced by the Arts and Crafts movement of the late 19th century, this “work of art” was created by Charles Rennie Mackintosh. His distinctive style mixed together elements of the Scottish vernacular and the English Arts and Crafts tradition with the organic forms of Art Nouveau. Mackintosh’s unique light, elegant and sophisticated interiors were an enormous contrast to the gritty, smoky urban city of Glasgow where he was born, trained and lived for most of his adult life. Glasgow is where the majority of his work was executed and Mackintosh’s career paralleled the city’s economic boom. By the end of the 19th century Glasgow was a wealthy, burgeoning European city with an immense network of trade and manufacture that supplied the world with coal and ships.

In 1896 Francis Newbery invited 12 local architects to enter a competition to design a new building for Glasgow School of Art. One of these firms was Honeyman & Keppie, who won the competition with Mackintosh as designer. The brief for the building put the location on a steeply sloping site with an extremely tight budget, seemingly dooming the building to a utilitarian aesthetic. Due to the financial restrictions the design was completed in two phases. The north end opened in 1899, but the construction of the west end did not start until 1907 and was only completed in 1909. This time lapse coincided with the most productive period of Mackintosh’s career and accounted for the changes in style between the first and second phases. 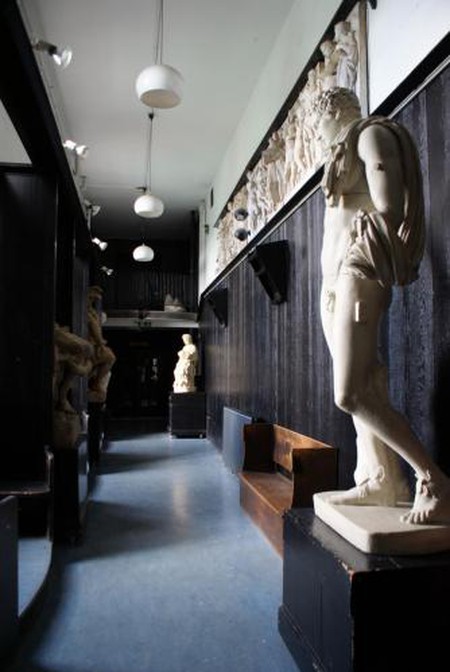 The school forms a simple E-shaped building with an austere and asymmetrical North façade with massive studio windows. A single central entrance leads to a staircase with two floors of studios to the right and left. In the second phase of construction, the west elevation was radically altered with the addition of the library’s dramatic three-storey windows. The interior of the library is dramatically lit with the central fall of light from the windows contrasting with the dark stained wooden gallery supported by split beams. Mackintosh designed the fittings and furnishings in dark stained wood decorated with splashes of red, green and white – a magical mix of academic sobriety and modern geometric intensity. This library was probably one of Mackintosh’s most exciting interiors in a building that both kick started his architectural career and later revealed his mature style.

In a heroic effort to keep Charles Rennie Mackintosh’s building at the heart of the Glasgow School of Art, resisting temptation to relocate to a Greenfield site on the outskirts of the city, the art school undertook a phased expansion of accommodation between the late 1950s and late 1970s. This included the construction of the Newbery Tower, the demolition of the inter-war Assembly Building and the blocking off of Scott Street with a link building, creating an open precinct terminated by a new lecture block to the west.

The north-west stair and lift tower contained the only literal references to the work of Mackintosh: slender timber uprights between stair flights and semi-circular openings in the separating wall, which illuminate the lift lobbies. The Newbery Tower was formed of clustered towers with trays suspended between and was strongly reminiscent of both Paul Rudolph’s School of Art & Architecture at Yale University and Louis Kahn’s Richards Medical Research Building at the University of Pennsylvania. 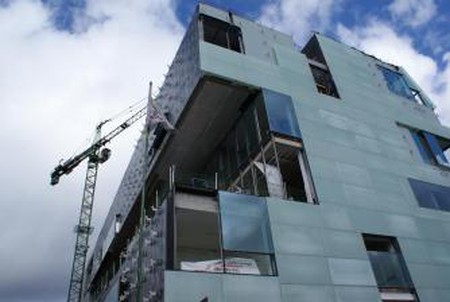 Recent redevelopment, currently under construction, resulted in the demolition of The Foulis Building and The Newbery Tower, with the building being refused listing in 2006 after considerable heritage debate. They are both to be replaced by a building by the American architect Steven Holl. His envision resembles a thin translucent materiality in considered contrast to the masonry of the Mackintosh building. The building promises to be a complimentary contrast, its exterior made up of very light, recycled double glass, playing contrast to the thick stone of The Mac directly opposite. 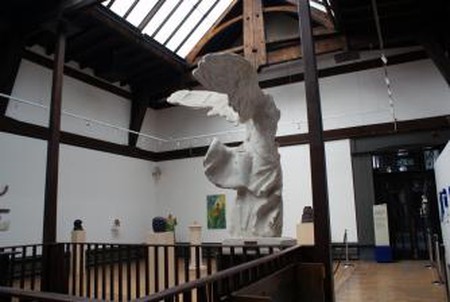 Taking one of the student-led tours around The Glasgow School of Art is recommended to experience it’s unique interior, normally closed to the public. The bright and airy Director’s Office with fitted cupboards and a fireplace is directly above the entrance. At the centre of the school, at the top of the stairwell top-lit with a glazed roof, is an exhibition space called ‘The Museum’, which regularly hosts temporary exhibitions by its students and visiting artists.

Due to the limited budget, there was little additional decoration to the building. Unusually for the period there was only a small stone carving over the entrance and any decoration that Mackintosh managed to incorporate was functional as well as beautiful. The massive fenestration of the north façade is visually broken up by decorative wrought iron brackets that brace the huge windows and can be used as window cleaning supports. The lively wrought-iron railings also give decoration to an otherwise reduced building with finials of stylised birds, bees and beetles that resemble Japanese Mon or family crests. 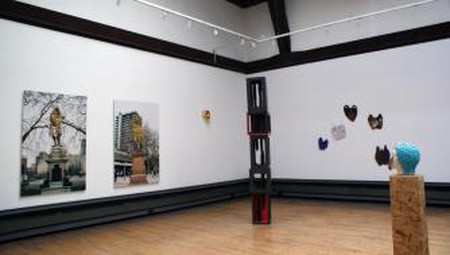 The central staircase is made of dark timber, again in the Japanese style, with occasional art nouveau decorative features including small stained glass windows on the mezzanine doors. The dark timber along with the absence of windows makes the staircase rather dark, a vast contrast to the artist studios where constant sunlight comes in through the north-faced windows (ideal light as the strength and the direction of sunlight does not change if it’s let in from the north side). Mackintosh was conscious of the lighting inside the building, perhaps partly influenced by the Japanese interior in which he was known to be intrigued by. His artist wife, Margaret Macdonald, clearly helped Mackintosh decorate the interior, suggested by the similarity of her paintings to those rose motifs repeatedly used for stained glasses and wrought-iron ornaments inside and outside of the building. The power of intricate lighting and the combination of design and art make the Mackintosh Building both functional and playful. 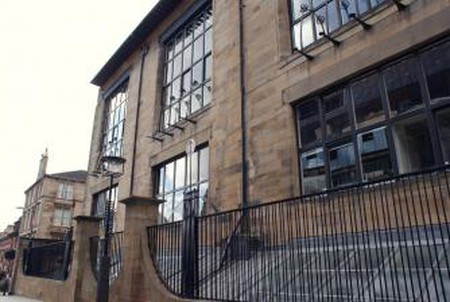 Over a century since its completion The Glasgow School of Art continues to fulfil its original purpose as a vibrant and hard working institution. Showcasing Mackintosh’s particularly Scottish contribution to the Arts & Crafts, Art Nouveau and art deco movements, this iconic heritage building remains committed to preserving the original fabric in the 21st century for generations to come.

For more information on The Glasgow School of Art tours visit: http://www.gsa.ac.uk/visit-gsa/tours/