9 Whisky Distilleries You Must Visit in Scotland

When in Edinburgh, by sure to stock up at the Royal Mile Whisky Shop | © Roger Cope / Alamy Stock Photo
Shortbread, tartan, kilts, bagpipes – ask anyone what springs to mind when you mention Scotland and it’ll likely be one of those. Or, of course, whisky. There are six distinct whisky-producing regions and 125 distilleries, many of which offer visitors a glimpse at their creative process with tours, and sampling. Here’s our guide to nine of the best to visit.

Distillery, Park
Highland Park Distillery | © Katherine/Flickr
Situated on the islands of Orkney, this is the most northern whisky distillery in Scotland, offering a variety of tours at different price points. One tour, the Magnus Eunson, allows the visitor to taste seven different whiskies. There is even the option of a specialist tour, which allows the keen visitor to actually work a day at the distillery. Highland Park still has a traditional malting floor, where the grain is turned by hand, something that is rare in most modernised distilleries. Making whisky since 1798, Highland Park has won the award for Best Spirit in the World three times.
More Info
Open In Google Maps
Holm Road, Kirkwall, Scotland, KW15 1SU, United Kingdom
+441856874619
View menu
Visit website
Visit Facebook page
Send an Email
Give us feedback

Distillery
Old Pulteney Whisky | © Petra de Boevere/Flickr
Cross the turbulent waters of the Pentland Firth on your way south from a visit to Orkney, and the Old Pulteney distillery in Wick is just a short drive away. Known as the ‘maritime malt’, Old Pulteney was founded in 1826, at a time when Wick was known as the herring capital of the world. Disaster struck the distillery when, in 1922, the town was declared an alcohol-free area. Fortunately for the whisky, prohibition was lifted 25 years later and, in recent years, the whisky has gone from strength to strength. There are two tours a day and booking is advised.
More Info
Open In Google Maps
Huddart Street, Pulteney Distillery, Wick, Scotland, KW1 5BA, United Kingdom
+441955602371
View menu
Visit website
Visit Facebook page
Send an Email
Give us feedback

Distillery
Blair Athol Barrels | © Jannis Andrija Schnitzer/Flickr
Situated in Pitlochry, the Perthshire town at the gateway to the Highlands, this distillery produces malt whisky that is added to the famous Bell’s blend, as well as a small selection of single malt bottles. The tour is engaging and well thought out, with the expert guides capable of answering even the most complex of questions. If you like your whisky without a trace of peaty, smoky nose and flavour, this is the tour for you.
More Info
Open In Google Maps
Pitlochry, United Kingdom
View menu
Visit website
Visit Facebook page
Send an Email
Give us feedback

Distillery
Glenkinchie Stills | © Mike Murry/Flickr
The ‘Edinburgh Malt’, this distillery is within an easy distance of the Scottish capital, and is well worth a visit. There is an excellent model of the distillery in the visitor centre, and there are a selection of tours to choose from, with a handy shuttle bus from Edinburgh possible, meaning you do not need to worry about designating a driver.
More Info
Open In Google Maps
Pencaitland, United Kingdom
View menu
Visit website
Visit Facebook page
Send an Email
Give us feedback

Distillery
Lagavulin Distillery | © Stephane Farenga/Flickr
The tours available at this Islay distillery are varied, with options including a warehouse demonstration, matched whisky and food treats, or premium tasting, as well as the standard tour. If you are a fan of peaty whisky, Lagavulin is a must-visit; the whisky is sometimes described as the aristocrat of Islay whiskies.
More Info
Open In Google Maps
Lagavulin, Isle of Islay, Scotland, PA42 7DX, United Kingdom
View menu
Visit website
Visit Facebook page
Send an Email
Give us feedback

Distillery
Laphroaig Glass | © Sönke Biehl/Flickr
A single year older than Lagavulin, the Laphroaig name is the most famous of the Islay whiskies, and consistently sells the most worldwide. The name itself means ‘The beautiful hollow by the broad bay.’ This distillery also offers a selection of different experiences, ranging from tastings to a four and a half hour ‘water to whisky’ experience. As a part of the standard tour, the option to take away your wee dram as a miniature if you are driving is a good touch.
More Info
Open In Google Maps
Islay, United Kingdom
View menu
Visit website
Visit Facebook page
Send an Email
Give us feedback

Moving north to the Isle of Skye, Talisker is now the only distillery to visit on this famous island and the dramatic views of the Cuillin mountains are to be savoured. In summer this distillery can get very busy, so it is wise to book a tour in advance. The whisky is not as peaty as those from Islay, but is still heavier than those from Speyside, or other Island whiskies. The standard tour is also available with a ‘bolt on’ whisky flight, for those who cannot spare the time for the full tasting.Talisker Distillery, Carbost, Isle of Skye 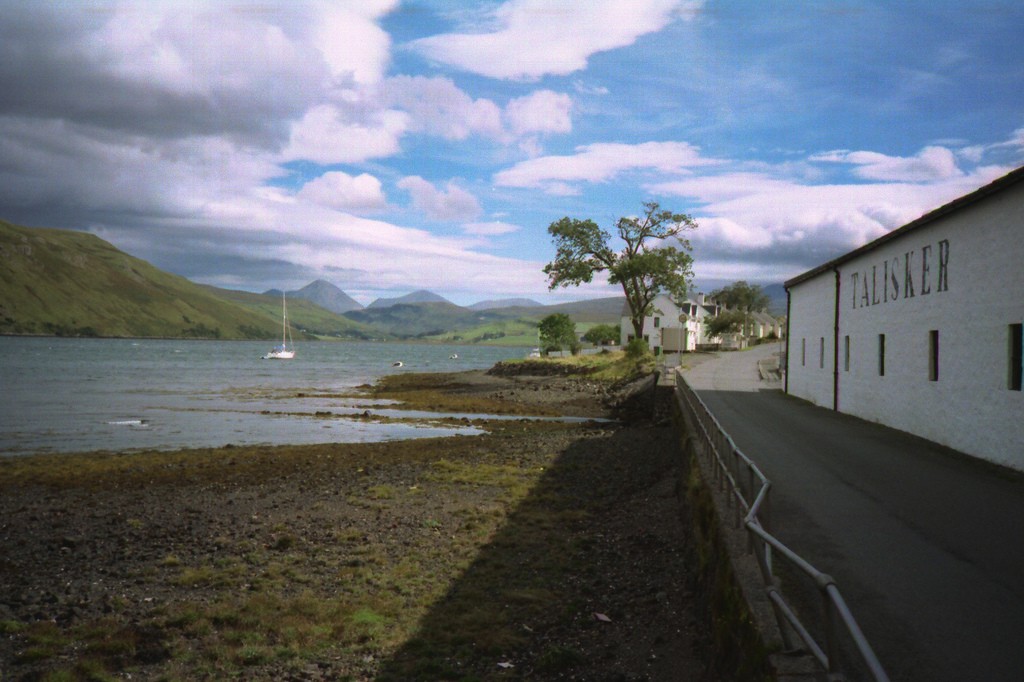 Distillery
Isle of Arran Barrels | © sebastian.b/Flickr
A relatively young distillery, this is currently the only one on the Isle of Arran. It features an excellent visitor experience; as well as tours and tastings, there is also an on-site café, and the distillery won Scottish Field Magazine’s Distillery Visitor Experience of the Year for two years in a row. An interesting piece of trivia relates to the two eagles on the logo. During the building of the distillery a pair of golden eagles nested on cliffs nearby, and work had to pause until the young had fledged.
More Info
Open In Google Maps
Isle of Arran, United Kingdom
View menu
Visit website
Visit Facebook page
Send an Email
Give us feedback

Distillery
Another award winning visitor experience, this Speyside distillery is situated in a remote Cairngorm glen full of history and exciting stories. A favourite whisky of Charles Dickens, around half of the single malt produced by The Glenlivet distillery is sold to America. As well as a selection of tours and tastings, the distillery provides details of different local walks in the area, tied in with the smugglers’ history of the whisky.
More Info
Open In Google Maps
Glenlivet, Ballindalloch, Scotland, AB37 9DB, United Kingdom
View menu
Visit website
Visit Facebook page
Send an Email
Give us feedback
Give us feedback