9 Of The Most Beautiful Walking And Hiking Trails In Orkney

Surrounded with fresh crisp air, pristine sea-fringed beaches and ancient sites of archaeological splendour, Orkney’s 70-some islands and skerries are a joy to traverse. Hidden around each far-flung corner is a wild and beautiful destination begging exploration. Between the rare bird sanctuaries, heather-clad landscapes and dramatic views, this Scottish archipelago is a never-ending wanderer’s paradise. Consult our top picks and start checking off the most stunning walking and hiking trails in Orkney.

Nothing can prepare you for the overwhelming majesty of Orkney’s Old Man of Hoy, a red-sandstone sea stack that proudly rises from the choppy waves like an ancient sea monster. Rivaling the islands’ standing stones in terms of wonder, this geological artwork, one of the UK’s tallest stacks, is best appreciated via foot or ferry. To witness this outstanding feat of nature, begin at the picturesque township of Rackwick on Hoy and venture uphill along the clear-cut coastal path until the Old Man comes into focus. Allow around two to three hours for the 5.5-mile round trip. Those bitten by the adrenaline bug can continue along the coast to St John’s Head and experience the 1000+ ft cliffs and high ridge in an 11 mile circuit. 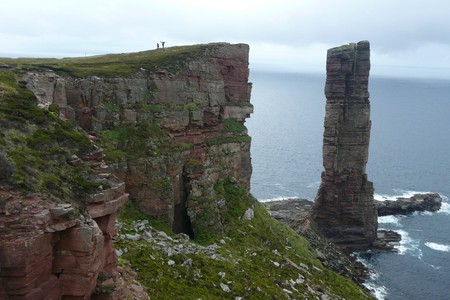 A small gem of an island not far from the Mainland, Rousay is crowned the ‘Egypt of the North’ due to its 160-odd archaeological sites. Traverse the ages with the Westness Heritage walk, a rough coastal route (around 4 miles long) that includes the most significant ancient sites punctuating Scotland’s most important archaeological mile. Start by soaking up the magic of Midhowe, an otherworldly Neolithic chambered cairn famed as the largest and one of the finest. From there, the trail’s historical highlights are never-ending from Midhowe Broch (built during the Iron Age) to Brough Farm ruins (dating back to the 1700s). 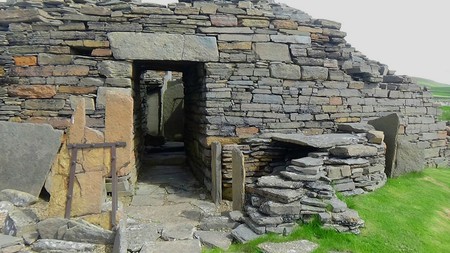 Westray or the ‘Queen O’ The Isles’ is a beauty of an island laden with wildflowers, wildlife and magnificent coastal and inland walks. A magnet for bird lovers, the RSPB nature reserve upon Noup Cliffs is a sight to behold – a city for seabirds in the form of vertigo-inducing cliffs encompassed by unforgiving swells. Walk along the spellbinding coast to the reserve and witness the thousands of bird species including Arctic tern, guillemot, puffins and kittiwakes. Continue on to marvel at Noup Head Lighthouse. Wonderfully remote and super scenic. 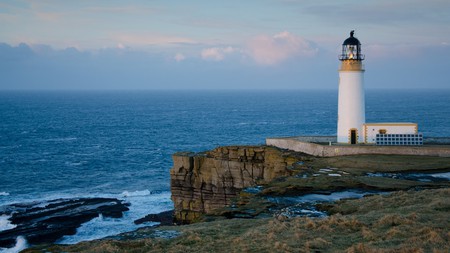 For some epic white sand action and solo serenity, look no further. Although relatively short, this coastal walk is a winner in terms of aesthetics, a bit of sand in your toes and fresh breezy air caressing your hair. Going in a circle, begin at the Bay of Tuquoy and head for the old holy ruins of Cross Kirk before reaching the swathes of pristine white sand and indigo waters that make up Mae Sands beach. On a rare sunny day, you’d be forgiven for thinking you’re in some tropical paradise! Priceless. 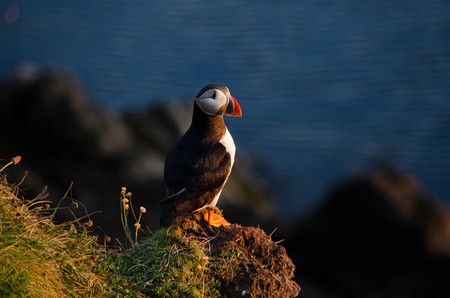 Those in it for the long haul should seek out North Ronaldsay, the most northernly and most remote of the Orkney islands – praised for its sense of solitude and migratory bird population. Overflowing with tranquil charm, this unique island is fringed by an old stone wall to keep its seaweed-eating sheep off the interior of the island and closer to the shore. The walking loop traces the shoreline outside the wall and consists of some arduous stretches and compelling sandy spots. Although its mostly shoreline walking mixed with sandy and grassy patches, a few boulders and tidal rocks enter the equation. Start this 12-mile route at Ronaldsay airport. 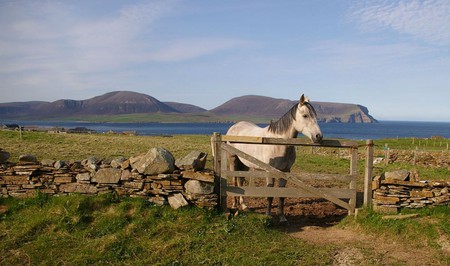 Ward Hill is a pilgrimage site for those with an affinity for a particularly pretty view and the thrill of the ascent. At 268 metres, the tip marks the highest point on Orkney and boasts arguably the best panoramas of Scapa Flow. Explore the Dwarfie Stane, an impressive rock-cut megalithic chambered tomb made from sandstone and prepare for a highly steep ascent of Ward Hill. Venture back by taking the glen path and take note that navigation skills are needed for the trackless heather moorland portion of the route. 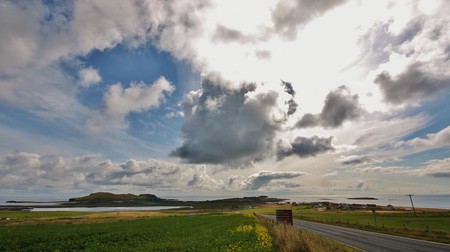 The Brough of Birsay is brimming with good walks…as long as your timing coincides with the low tide! This charming uninhabited tidal island is overrun with age-old Pictish and Norse sites and is only reachable by causeway when the tide permits. As an easy circuit option, it can be walked in under an hour and ticks every box in terms of head-turning sites: think ancient settlement ruins, birds upon birds during the right seasons, and a tiny picture-friendly lighthouse. The views towards the west and north coasts are out of this world, too. Make sure to keep an eye out for the tide or you’ll be marooned for longer than desired! 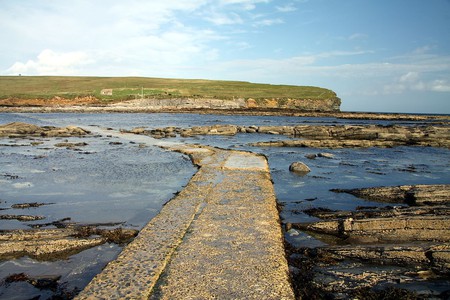 Footpath To The Brough Of Birsay | © Chmee2 / WikiCommons

There’s no better way to revel in Orkney’s fresh air and diverse landscapes than a walking tour of South Ronaldsay from Kirkhouse to Burwick. At just under 10 miles, this diverse route has the whole gamut from cliffs and rocks, to bays, birds, views, age-old churches and the Neolithic Tomb of the Eagles. With each step unfolds a new appreciation for nature, history and the great Orcadian outdoors. Like the vast majority of walks and hikes across the islands, this trail can be custom-made to suit an individual’s stamina and time constraints. A real crowd-pleaser filled with surprises along the way. 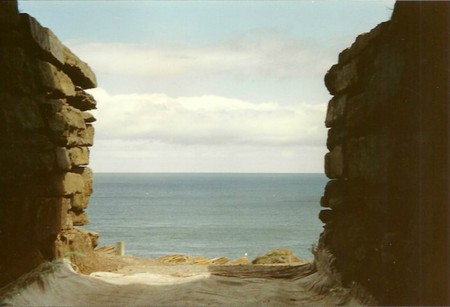 A stand-out jewel as far as Orkney’s plenitude of gorgeous coastal walks go, Mull Head at the furthest point of Deerness boasts one of the best sea-rimmed circuits. Whatever the weather, the sea views will be chock-full of emotion. Along with the epic clifftop paths, the Gloup (a spellbinding chasm of a collapsed sea cave separated from the ocean by a land bridge) is a major highlight. Lots of boggy heath, heathery patches, wildlife galore (seals and seabirds) and exposed paths add an extra dose of excitement. 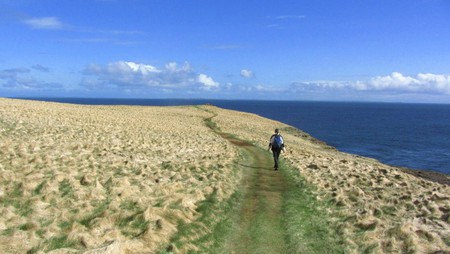