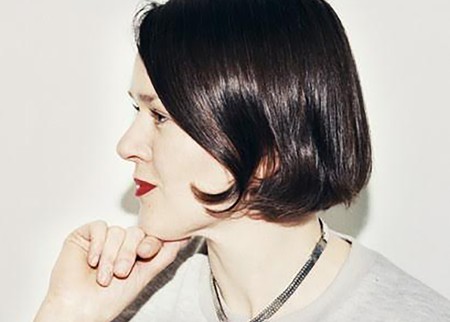 Holly Fulton really requires no introduction whatsoever — her designs do all the talking. Following the launch of her eponymous label at Fashion East in 2009, this Edinburgh-born fashion phenomenon has been dominating catwalks and commandeering the minds of fashion lovers worldwide ever since. Fulton’s designs exude a certain kind of carnival chic essence and although she draws inspiration from a kaleidoscope of sources, each and every piece paints the most captivating and vibrant picture. Those in the know can detect a Holly Fulton design from outer space. Discover how.

Fashion royal Holly Fulton is referred to as the ‘Queen of Prints’. Whether digitally manipulated or hand rendered, you don’t have to be a fashion follower to notice that bold prints and 3D graphics — are more than frequently — the stars of her show. The beautiful thing about Fulton’s eclectic prints is that they’re all dependent on her moods and magnificent musings. She follows her inspirations and allows them to electrify her at every given moment. And wow, this highly acclaimed designer is on fire. Experience the surrealist tones and lingering shadows of prominent British artist David Inshaw, off-kilter badminton vibes, and adventure in the Highlands of Scotland in her A/W 2016 collection.

Once the sheer beauty of every eye-catching design and the hypnotic presence of each psychedelic-esque print resonates within, style enthusiasts cannot help but admire Fulton’s innovative use of textiles. This powerhouse is fearless in all that she does. At the end of the day, the way in which she is perfectly unfazed of using quite the creative conglomeration of multiple fabrics is totally awe-inspiring. Fulton undeniably favours luxurious fabrics, which is why her designs are always fashionable, wearable, durable, and high quality. From cashmere and wool coats to slinky silky camisoles and slip dresses, Mongolian furs, latex, leather, and lace, Fulton’s A/W 2015 collection is a testament to the fact that she is a rock star. This leading lady is certainly not a one trick pony with her use of transparent skirts and indigo denim in S/S 2016 or her dramatic velvets, dreamy pinks, coarse knobbly textiles, and merino knitwear in A/W 2016. If you see expertly crafted classic clothing made from a myriad of luxurious textiles — that also happen to be layered with eclectic prints — then it is more than likely, a Holly Fulton.

The designs of Holly Fulton always leave a lasting impression that’s the epitome of positivity. The same goes for her accessories. It’s safe to say — along with the grand title of ‘Queen of Prints’— that this innovative individual should be the Queen of all statement pieces, handbags, jewelry, and shoes too. And yes, she has collaborated with Christian Louboutin on more than one occasion. They say that accessories complete an outfit (as if Fulton’s designs need completing). Holly’s do exactly that and then some. Her accessories are bold, beautiful, and bedazzling in the chicest of ways. From sparkling gargantuan crystals to whimsical colours and dreamy geometric prints, her jewelry can be spotted a mile off. Consider it the perfect fusion of costume and classic. Her A/W 2015 wonderfully obnoxious fan-shaped earrings made from crystal and Perspex look like half moon watermelons and scream all things fun. The bulky baby blue beads from S/S 2015 are Flintstone-fabulous and are undeniably the perfect statement piece. Fulton’s handbags are equally as impressive as her clothes. They all possess that iconic Holly Fulton flair. Just one glance at her distinctive collaboration with Radley (think luscious leather, intricate etchings, bold prints, art deco lines, and magnificent mosaic patterns) causes bag lovers to enter into a dreamlike state of wonderment.

It’s no lie that throughout her immensely successful fashion career, Fulton has always had a penchant for prettifying decorative embellishments. In true Fulton style, such embellishments are comprised of a plethora of unique materials from Perspex to crystal, plastic, leather, and velvet. Just like the rest of her work, the list is never ending. For instance, her A/W 2016 studded Swarovski crystal jumpers, bubble skirts adorned with laser-cut organza paisley ruffles, and big beaded straps caused quite the scene when they floated down the catwalk. Additionally, the resplendency of her elaborate giant sequins in S/S 2016 resembled a flame that could never be extinguished. Rewind back to 2014 and discover calculators and other techy motifs.

The moral of the story remains, that Holly Fulton can do no wrong when it comes to her spectacular embellishments. After all, fashion enthusiasts always seem to flock to them like a magpie to something shiny.

Those in the know are fully aware of the dreamy fairytale-esque vibes that encapsulate Holly Fulton’s designs. Despite the multiple prominent influences, vast array of prints, fabrics, colours, and embellishments, each and every Fulton collection possesses the same otherworldly essence. Watch one of her fashion shows and notice how the music crashes into the clothes to create a wildly surreal and beautifully futuristic vibe — it sends onlookers into a dreamy trance. Her patterns are hypnotic and surprisingly soothing (despite all the hip psychedelic tendencies). Whether misty pinks, baby blues, or camo greens are summoned into the equation, Fulton has this way of cleverly creating a utopian atmosphere that is draped in lullingly whimsical hues.