15 Things Adrenaline Junkies Must Do in Scotland 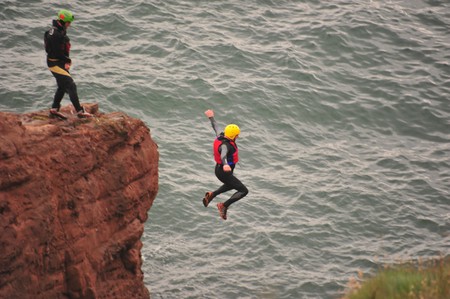 Scotland is a fantastic destination for thrill-seekers, the landscape lending itself to all manner of adventures involving a serious adrenaline surge. Here we list fifteen options to get the heart racing; some you may have thought of, others might be new to you, but all are extremely fun!

Scotland is full of places to climb up and then return to ground level (much quicker) by rope. The options here are varied depending on your skill level, with courses available in rock climbing and abseiling, or thousands of locations for the experienced climber. There is also the option for one of the most iconic of all abseil locations — the Forth Rail Bridge. Every year there are a number of charity abseils here, but places go fast. For the adrenaline-lover, the chance to free-fall descend the 50 metres (165 feet) to the beach below is not to be missed. 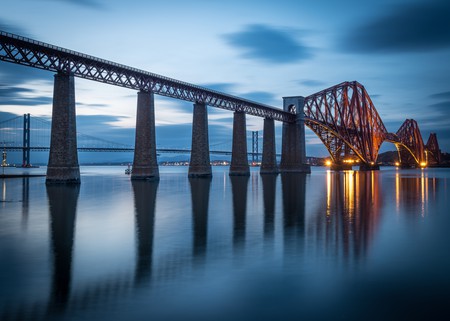 The site of the UK’s first fixed bungee jump, still one of the highest and definitely the most beautiful. Bungee jumping with Highland Fling at Killiecrankie in Highland Perthshire is a must for those who love to safely throw themselves off high places. The jump platform is attached beneath the Garry Bridge, which carries the A9 north to Inverness and beyond and offers 40 metres (131 feet) of jump height in truly stunning Highland surroundings. This is also the site of the only black-out night jump in Europe, so if daytime bungee jumping is too tame for you, during the winter months it is possible to do the same jump in pitch-black surroundings. 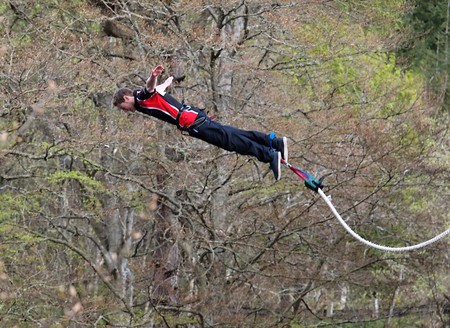 It is known as canyoneering in the States. If it’s too much try gorge walking, which is similar but generally involves going up instead of down. Standing under a waterfall is exhilarating in itself, sliding down a waterfall takes it to a whole new level. There are several companies in Scotland offering instruction and trips with some leading adventures at several locations, depending on skill level. You will get very wet and you will need that helmet! 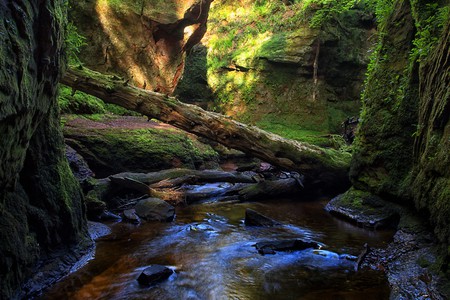 From mighty sea caves such as Smoo, to places with eerie connotations like the Bone Caves in Assynt, Scotland has an underground world to explore. The longest caves are in the limestone rocks of Assynt and many of these should not be attempted by a beginner, preferably with someone who knows the caves. The Grampian Speleological Group is Scotland’s largest caving club and welcomes international cavers. 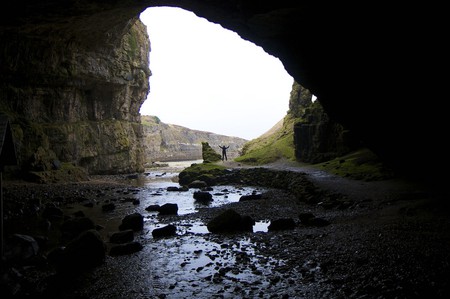 An adrenaline fuelled combination of adventure swimming, climbing, canyoning, scrambling and leaping from high places into the sea, coasteering is basically just about going around a rocky coastline and having as much fun as possible. Helmets, lifejackets and wetsuits are a must, as is an expert guide to keep you safe. Not your usual beach holiday! 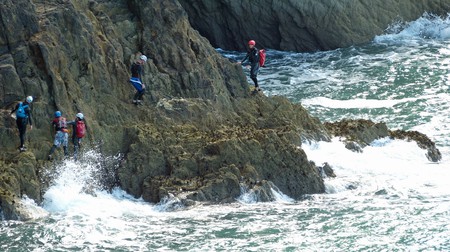 If you are serious about testing your strength and skill in an array of traditional Scottish sports, get into training and sign up to take part in one of the many Highland Games that take place in Scotland every year. However, this will take a serious time commitment and detailed planning, so it is lucky that there are alternatives you can enjoy by just turning up on the day. Perhaps the most fun can be had in joining a team for the tug o’ war, with teams going head-to-head trying to pull the other over as they battle it out by pulling a thick rope. Other options include foot or cycle races over various distances, or tossing a sack of hay over a bar with a pitchfork. The Queen always makes sure she attends the games at Braemar and Prince Charles often visits the Mey games, so you may have a Royal audience.

Scotland has some serious seas, whitewater rivers and conditions to challenge even the most experienced of kayakers. As a bonus, there are many places to hire equipment, so you do not need to worry about being without a paddle. There are places it might not be wise to venture, however, such as the famous Gulf of Corryvreckan or the extreme tidal power of the Pentland Firth. 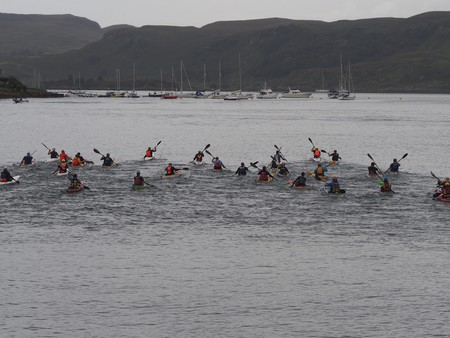 Scotland has seas, Scotland has surf and Scotland has wind. Add these together and you have perfect kitesurfing conditions. Many people bring their own gear and travel along the coast looking for ideal spots, which are in plentiful supply. Training courses are also available but be warned, you might end up hooked. Such is the surge of adrenaline when you are whisked into the sky!

Every New Year’s Day, a brave (or foolish?!) group of people venture into the icy cold waters of the Firth of Forth, near Edinburgh, for a wild swim with a difference. Often dressed in fancy dress, participants should book their place in advance, as the event sells out each year. Thousands of pounds are raised for charity and the spectacular backdrop of the Forth bridges just adds to the spectacle. 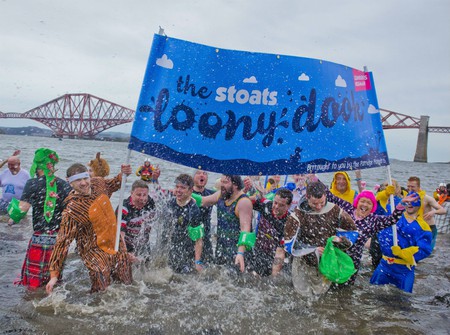 As you can imagine, all those mountains and glens come in very handy indeed for the sport of mountain biking. If you like cross-country, then there are a wealth of forestry tracks or even old drove roads to explore — the driven cattle are long gone, but the tracks remain. Bike-camping is becoming increasingly popular in Scotland, with the many perfect spots for wild camping. However, to really experience a thrill of speed and technical precision then there are also many excellent downhill trails available, including those at Fort William which is a host to the Mountain Bike World Cup. Keep your eyes on the trail and try not to let the outrageous views distract you.

Also known as ATV (All Terrain Vehicle) riding, quad biking is offered at an array of places in Scotland. No matter what your level of ability you should find something to suit, whether you want to blast around a muddy course, or a longer cross-country trek, with a picnic partway through the ride! 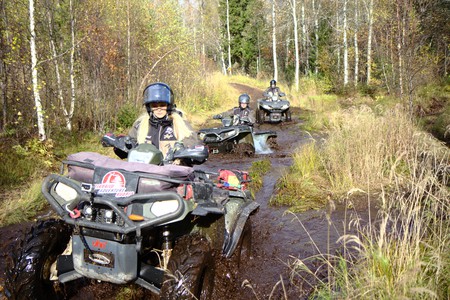 If full-on rock climbing is not your thing, but the idea of crawling on hands and feet across exceptionally high and slippery places appeals, then scrambling is for you. Scotland’s mountains can nearly all be climbed without the use of ropes, but there are many of them that require considerable care. At times you might find yourself moving along on your bottom, a drop of hundreds of metres on either side… 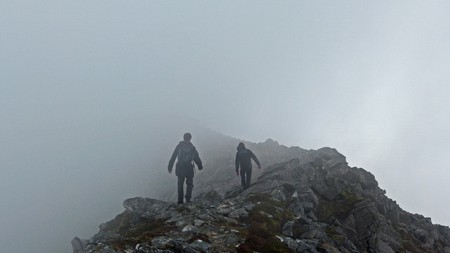 As we have said before, Scotland is well-served for those who like to ski and snowboard. But exhilarating fun on the snow is not limited to just these two activities. Other options available include dog-sledding, ice climbing and the favourite of many a child in winter – sledging.

This may sound a little tame and lacking in adrenaline, but there are plenty of locations in Scotland where the every day act of walking suddenly becomes something rather more adventurous. Take the walk up to the famous Steall Falls for example, here you have to option to cross the Water of Nevis on a simple bridge made of three wire cables (and, yes, in the past they have been known to snap). A walk along the top of the mighty cliffs on Hoy in Orkney can certainly set the adrenaline going, especially if it is windy. Walks in Scotland often require added care and attention with forward planning, but the pay off is increased exhilaration and excitement. 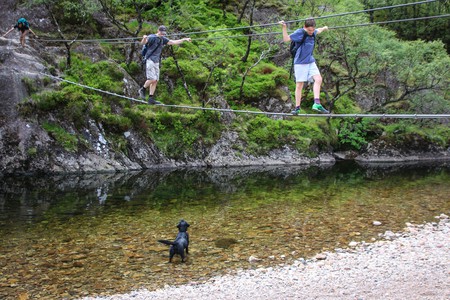 Also known as sphereing, essentially you strap yourself into a giant inflatable ball and then roll downhill. Originating in New Zealand, this fits Scotland’s hills well and is likely to only increase in popularity and availability. The UK’s fastest downhill track is found just a short distance from Edinburgh at the excellently named Rolling Haggis.