Glenfinnan Viaduct | © john mcsporran/Flickr
You don’t need the Sorting Hat to explain the links between Scotland and Harry Potter. This magical world of witchcraft and wizardry is immortalised both by Rowling’s books, her sources of inspiration and through the spellbinding Scottish filming locations. For nostalgia’s sake, dust off that trusty old Nimbus 2000 or whip out that floo powder and make way for Scotland to live out all HP dreams. Accio Firebolt!

Cafe, Restaurant, Coffee Shop, British, $$$
The Elephant House | © Alf Melin/Flickr
Pinned as ‘the birthplace of Harry Potter’, a visit to Edinburgh’s The Elephant House is a mandatory rite of passage for any Potter fan. Rumours state that this cosy café served as a writing sanctuary for the woman behind the magic, while also doubling up as a convenient way to cut down on personal electricity bills in her flat. Although she did write here, many stay true to the notion that Nicolson’s Café — which now goes by the name of Spoon — deserves the credit for hosting her as she wrote most of the first book. Either way, her presence graced both places and that’s enough for hardcore fans!
More Info
Open In Google Maps
21 George IV Bridge, Edinburgh, Scotland, EH1 1EN, United Kingdom
+441312205355
Visit website
Visit Facebook page

Even muggles can see why Rowling sought writing inspiration from her adopted home town of Edinburgh — the world’s first city of literature — and the rest of bonnie Scotland. Dotted around the capital are a myriad of HP places, including the real Diagon Alley in the form of Victoria Street, with its hodge podge of alluring shops and kaleidoscopic colours, and also the nearby Candlemaker Row. Both streets are a stone’s throw from George Heriot’s School, a dramatic architectural masterpiece with ancient school houses. Both Heriot’s and Hogwarts bear an uncanny resemblance. 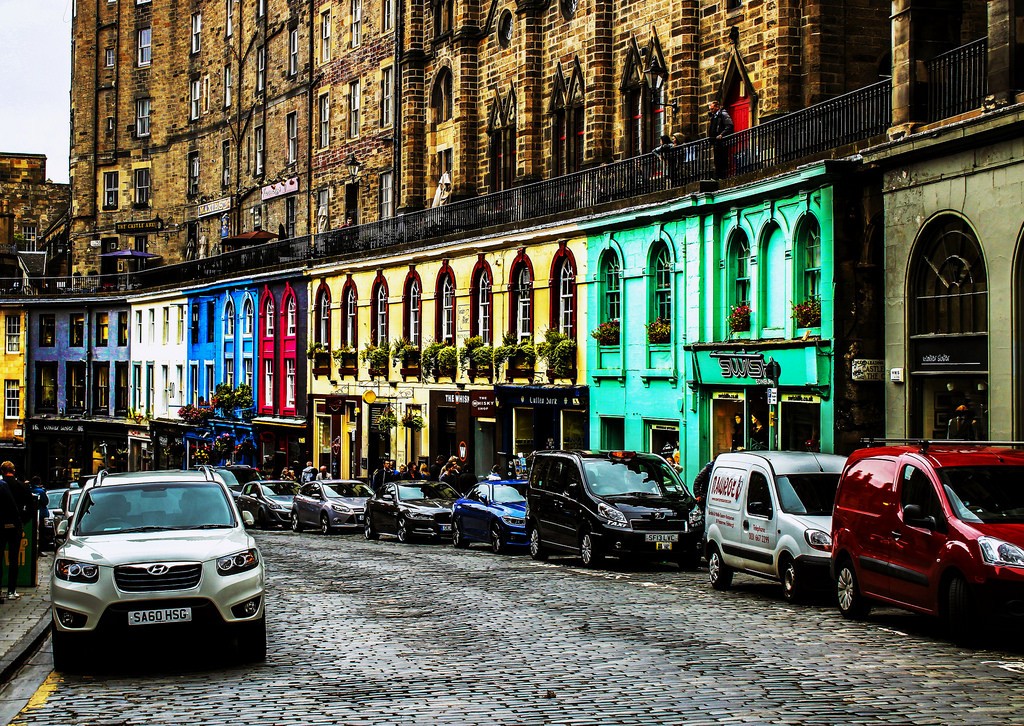 Greyfriars Kirkyard is a known respite spot for Rowling. It is also home to the real-life grave of Thomas Riddell Esquire. Could it be that Rowling found Voldemort’s true name, Tom Riddle, while wandering the grounds of this ancient graveyard? Greyfriars also hosts the resting places of Elizabeth Moodie and William McGonagall, aka Mad-Eye Moody and Professor McGonagall.

Hotel, Luxury
The Balmoral Hotel was built in 1902 | © The Balmoral Hotel / Hotels.com
ReserveRead More
A gracious building of handsome appeal, the Balmoral Hotel is an Edinburgh institution and timeless swanky hotel. It’s also where Rowling sought sanctuary to complete The Deathly Hallows devoid of interruptions. HP fans with a thick wallet can stay in the same room, now aptly named the J.K. Rowling Suite, for a sizeable sum per night. Here you will lock eyes with Rowling’s very writing desk where all the magic happened, the signed marble Hermes (Greek God of Travel) bust, and brass owl door knocker. The whole scenario is even more glorious than tasting Bertie Bott’s Every Flavour Beans for the first time!
More Info
Open In Google Maps
1 Princes Street, Edinburgh, Scotland, EH2 2EQ, United Kingdom
+441315562414
Visit website

Natural Feature
© Derek Croucher / Alamy Stock Photo
The atmospheric Loch Shiel features in the films as Hogwarts Lake and was picked for close-up shots, while the equally as striking Loch Morar was used for wide establishing shots. Fans can grace the waters of Loch Shiel on a cruise. Due to the sheer untainted beauty, experiencing an overwhelming flood of emotions is inevitable. Oh Scotland.
More Info
Open In Google Maps
Scotland, United Kingdom

Hauntingly beautiful and destined to spark many a thought, Glencoe is the setting for Hagrid’s Hut — a place of peace for Harry and friends in the series. This iconic Scottish site actually features throughout multiple films as a breathtaking backdrop and also in the famous scene where Hermione punches Malfoy…shame it wasn’t a Glasgow kiss! Imbued with mind-blowing hues of green, amber and blue, Torren Lochan hosted a replica of this abode for the filming of The Prisoner of Azkaban. 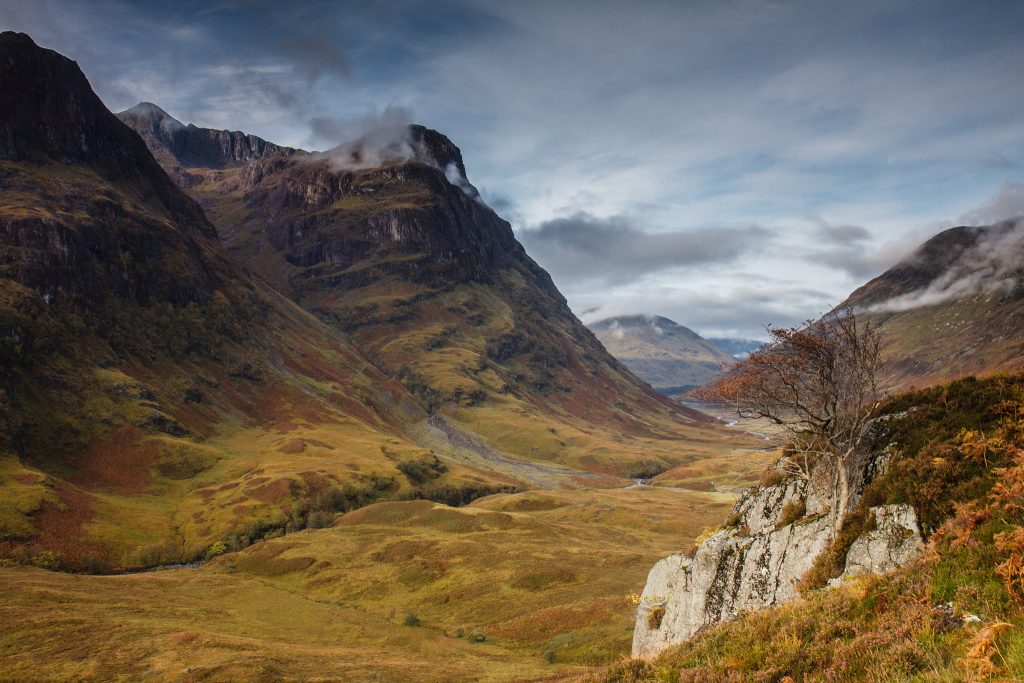 A pocket of peace and unparalleled beauty, the wee island of Eilean na Mòine encompassed by the freshwaters of Loch Eilt plays an integral role as Dumbledore’s grave. Adding to the atmospheric shots, this compact island was digitally situated upon the ever-so scenic Loch Arkaig for the films. Loch Eilt also features in some exterior shots of the grounds at Hogwarts. 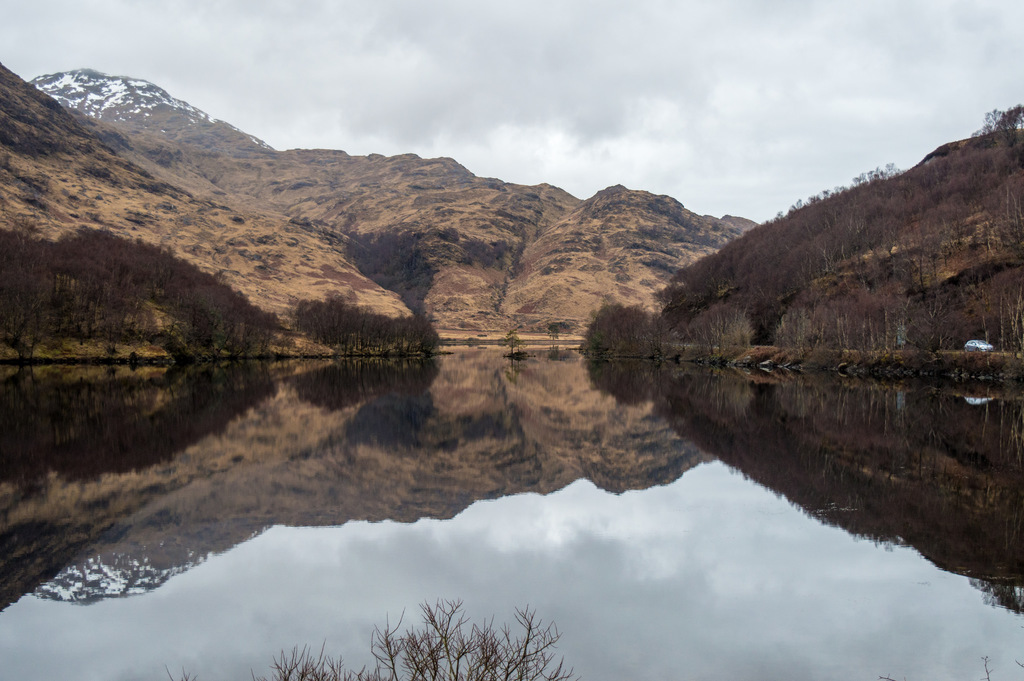 Bridge
Glenfinnan Viaduct | © john mcsporran/Flickr
Since the moment the books hit the shelves, every Potter fan dreamed of boarding the Hogwarts Express. Doing the books justice, the magnificent 21-arched Glenfinnan Viaduct played its part as the bridge leading to Hogwarts graced by the Hogwarts Express. Muggles today can relive the magic with a journey on the Jacobite Steam Train.
More Info
Open In Google Maps
A830 Rd, Glenfinnan, Scotland, PH37 4LT, United Kingdom

Those who find themselves spellbound with the Hogwarts Express will recognise Rannoch Moor, an area of untamed wilderness awash with an eclectic array of wildlife, lochans, and rocky patches, from the journey. This breathtaking place can be seen from the West Highland Line and was infiltrated by Death Eaters in the Deathly Hallows Part 1 when they appeared on the train.

A cascading ribbon of white water following the ways of the slope it caresses, Steall Falls is a picture-perfect waterfall situated in Glen Nevis. Its beauty is showcased, along with the all-encompassing scenery, in the Triwizard Tournament in the Goblet of Fire when Harry faces the Hungarian horntail dragon. More alluring than a golden snitch, the falls are also the backdrop for many Quidditch matches. 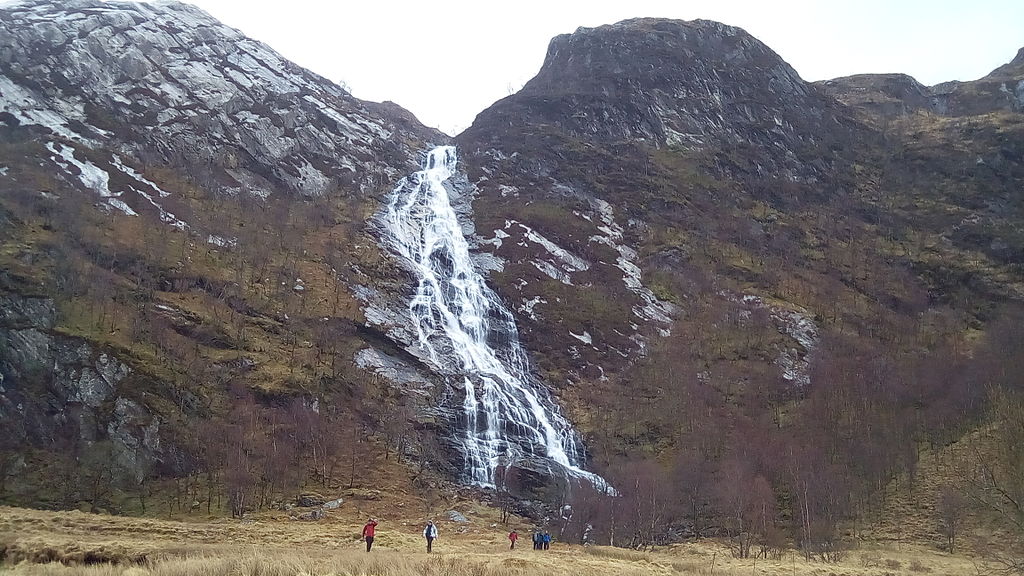 Park
Black Rock Gorge | © Donald Bain/Flickr
The vertigo-inducing cleft, Black Rock Gorge, was also in the scene with the notorious Hungarian Horntail in the Goblet of Fire. At 120 feet deep and frightfully narrow, this is where Harry surreptitiously hides himself away from the dragon’s gaze. We say good on you Harry!
More Info
Open In Google Maps
Balconie Street, Evanton, Dingwall, Scotland, IV16 9UN, United Kingdom
+441349830917
Visit website

One of the many glens embellishing the Highlands, Glen Etive welcomes film buffs and book worms eager to explore its mystical ways. This iconic glen was used for numerous shots throughout the Deathly Hallows films and is a playground for those overcome with a sense of adventure. 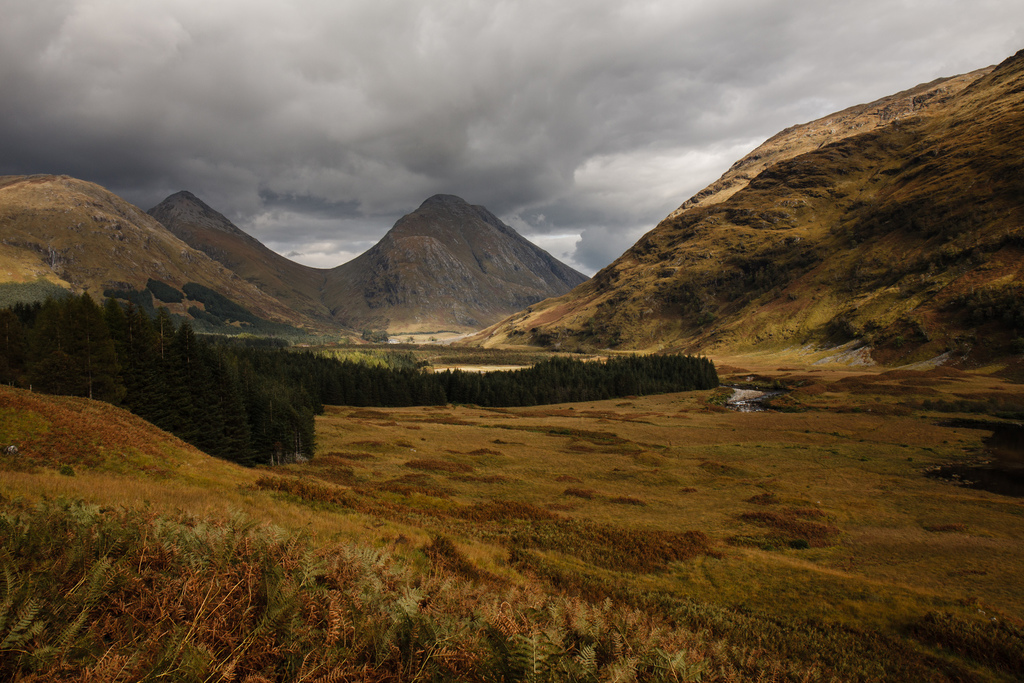 Although no muggle could ever fully understand the bond between BFFs Hermione, Harry and Ron, Loch Etive is a good place to start! This sea loch and its bonnie banks made a cameo in the film as the setting for the camping trip. 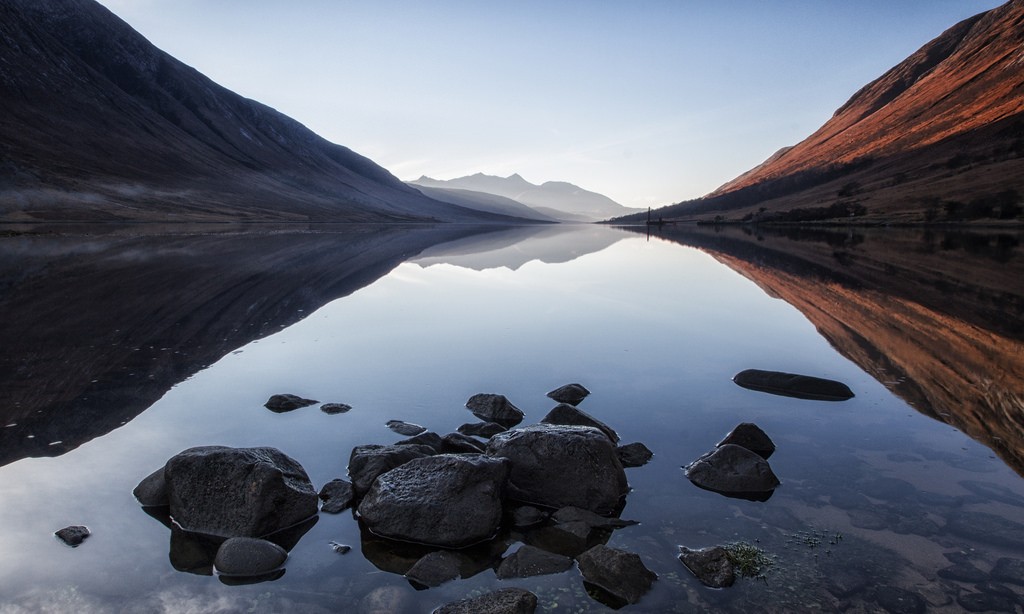 Every witch and wizard needs an owl. Those intent on getting into Hogwarts should swing by the Scottish Owl Centre and learn a trick or two from Oulu, a delightful 15-year-old Great Grey Owl who happens to be the real sister of Errol, Ron’s famous bird. Witnessing the owls partake in handling sessions and flying displays is almost simple magical! 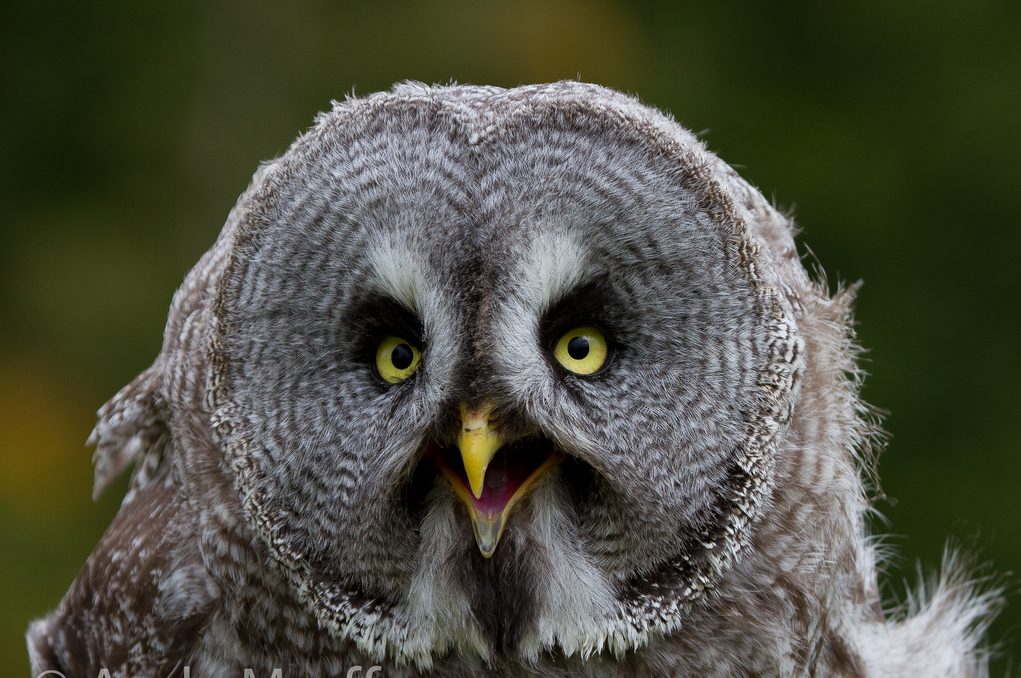