Skye Coral Beach | © shilmar/pixabay
Some exposed, others lining the remote fringes of the country, the many beaches of Scotland exist like a glorious nexus of coastal paths and sea. From glistening silver sands to secret rock pools, explore our edit of the most beautiful and underrated Scottish beaches, many of which are regarded as the world’s finest.

Laced with lines of sand as white as snow and rippling turquoise waters, the beaches on the west coast of South Uist are one in a million. Set amidst a backdrop of dunes and machair overrun with flowers, these sandy stretches are both wonderfully remote and breathtakingly beautiful. The lack of people is an added bonus! 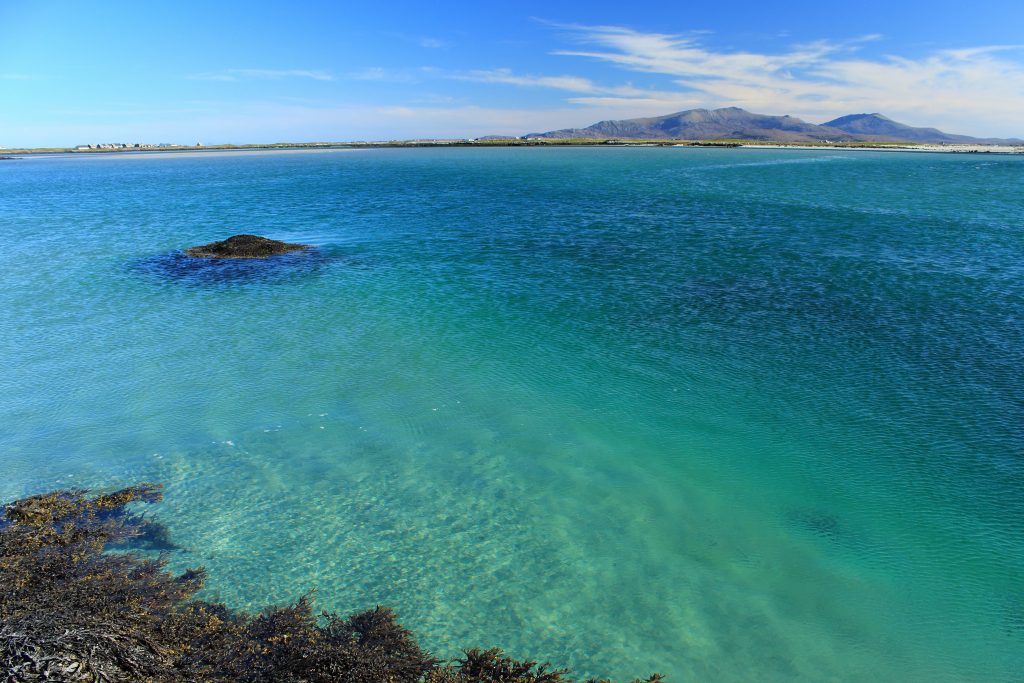 Just a stone’s skim from its more famous counterpart Luskentyre Beach, Scarista resembles a snapshot from a dream. The Sound of Taransay boasts mind-reeling hues of blue, while the sands are folded with gold tones for days. Perfect for walks or wild swimming, Scarista is also a prime place for spotting local wildlife like seals and eagles. 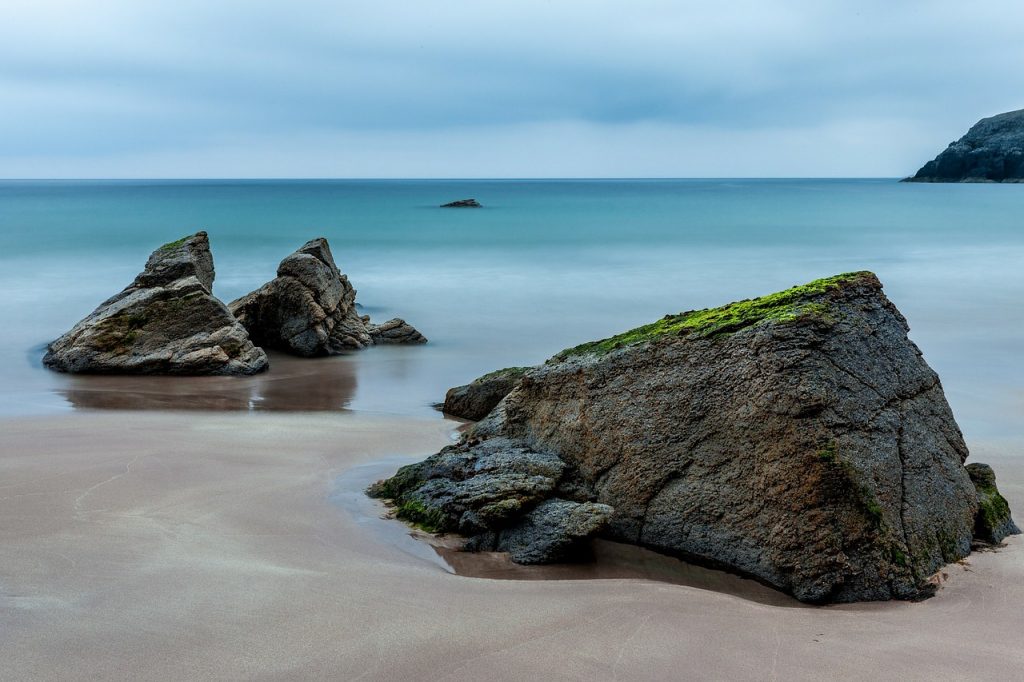 Elgol Beach on the Isle of Skye is an otherworldly coastal pocket and playground for photographers with a discerning eye. With the omnipresent Cuillin as a backdrop and sculptural stones forming a puzzle, this beach is less of a lounging spot and more of an endless adventure zone. 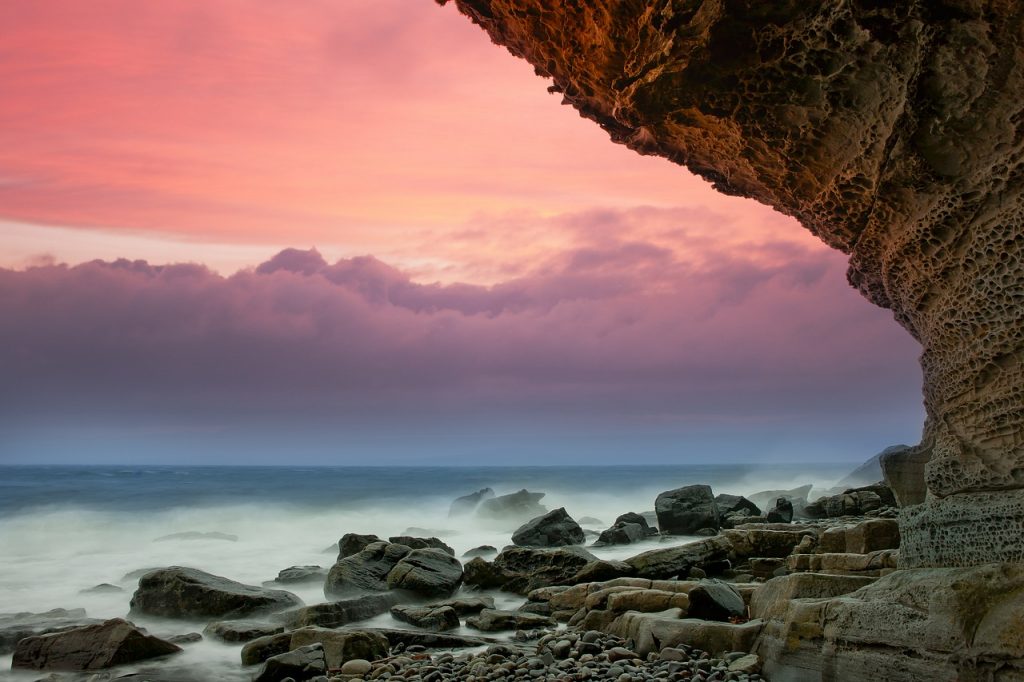 Surrounded by peach-tinted golden sands and cerulean swells, Saligo Bay is one of Scotland’s prettiest beaches. Come rain or shine, it never fails to take your breath away with its dramatic scenery and wild ways. Situated on Islay, this one is a must-visit for wanderlusters.

Adored by wanderers and wild campers alike, Ceannabeinne Beach sports dramatic cliffs and spellbinding sea views over to the nature reserve island of Eilean Hoan. Graced by famous Scots novelist Sir Walter Scott during the 1800s, this sandy sanctuary is unrivaled inspiration for even the most mundane of minds. Ceannabeinne’s former title ‘Traigh Alt Chailgeag’ translates as ‘The Beach of the Burn of Bereavement and Death’ and derives from the tale of a drowned woman who was washed up on the beach. Today, however, only positive vibes surround it! 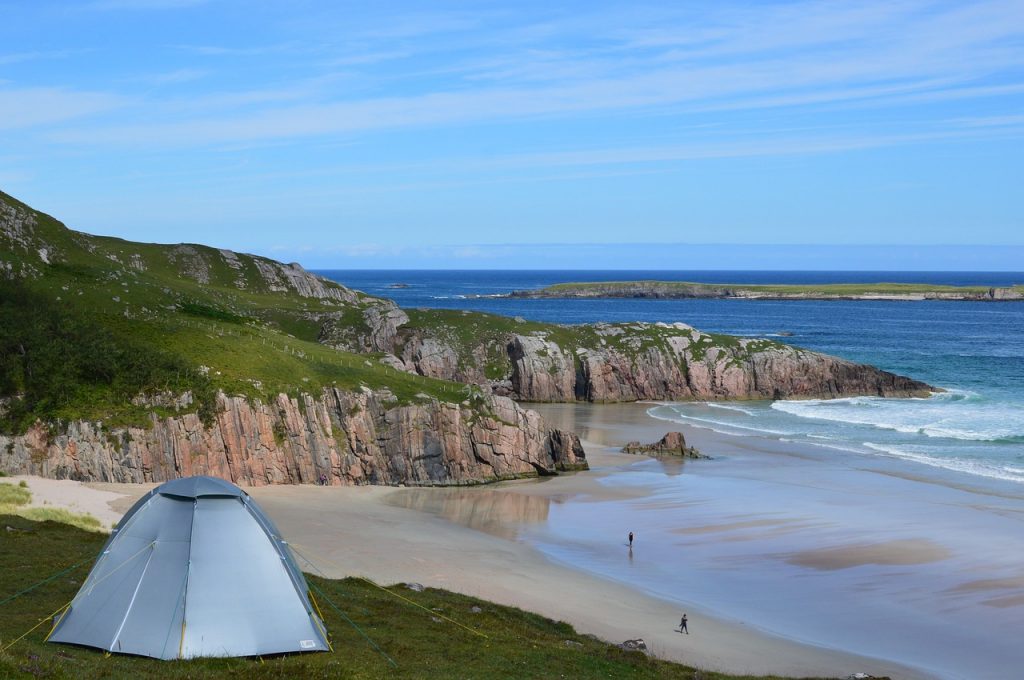 A place of untamed beauty and pristine vistas, Vatersay in the Outer Hebrides is one of those memorable places set to steal hearts for all eternity. Beautiful swatches of soft, silky sand meet with crystal aquamarine seas and mimic many desirable beach haunts in the Caribbean. A magnet for bird watchers and sea seekers, sightings can span from puffins to razorbill. Those island views though! 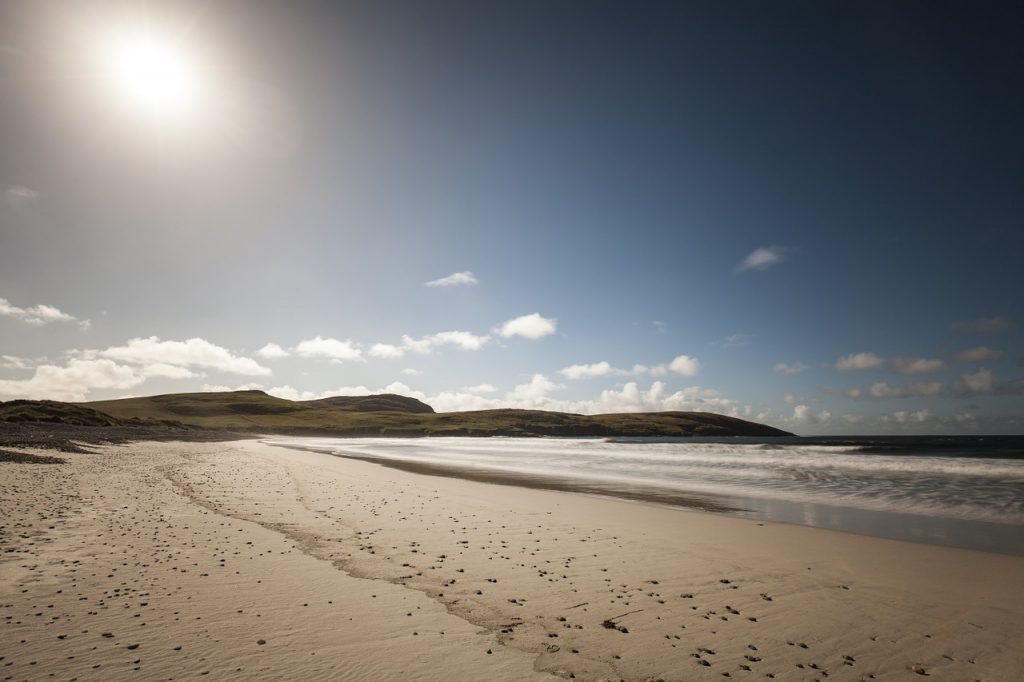 A place suited to epiphanies and thoughtful strolls, the sands blanketing the edges of St Ninian’s Isle are a sight for sore eyes. This vast tombolo on bonnie Shetland’s west coast is engulfed with strong Scottish sea on both sides. The fusion of colours mixed with the vast endless sky make it postcard-worthy material. 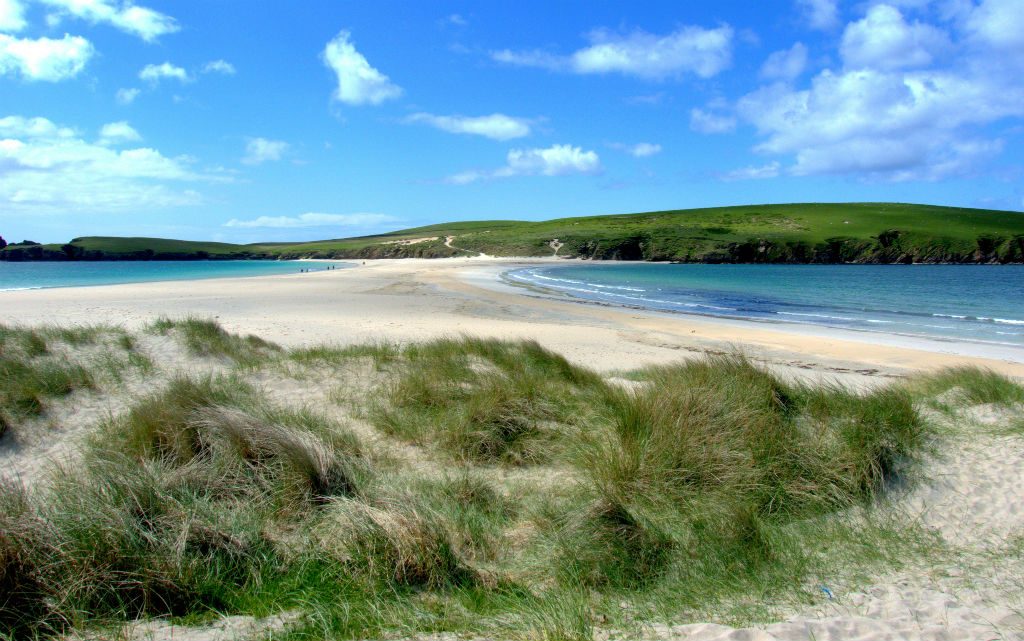 Oldshoremore Beach in Sutherland, with its frosting of wispy sand and smug crystal clear waters, is wholly magical. Suited to peaceful meanderings and mindful meditations, this slim beach evolved from sandstone and seashells that eroded over time. Gazing outwards across the vast open sea and rocky coastline could never lose its lustre.

Sanna Bay is a seascape of shelly sands and royal blue sea, making it one of those life-affirming places every wanderluster must visit. It also happens to bask on the Ardnamurchan Peninsula teetering at the most westerly tip of mainland UK. The mind-blowing views expand to Rum, Canna, Eigg, and Muck and are only outdone when a curious dolphin or whale decides to stop by and embellish the already breathtaking scene! 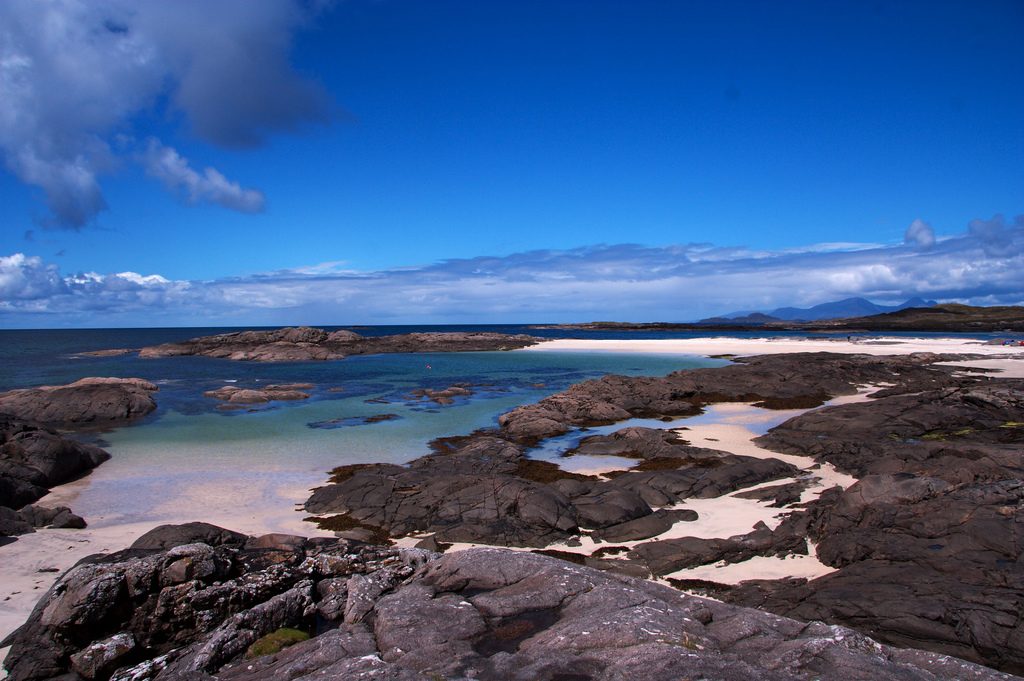 Made for moonlight musings and counting the constellations, Calgary Beach near Dervaig on Mull is a magnet for wild campers, adventurers and stargazers. Its tiny size doesn’t detract from the overwhelming beauty displayed in the Scottish skies, both at night and during daylight hours, and its brilliant blue basin of sea water. With a carpark, unofficial camping spot and reels of spirited machair, visiting Calgary is like coming home for the first time. 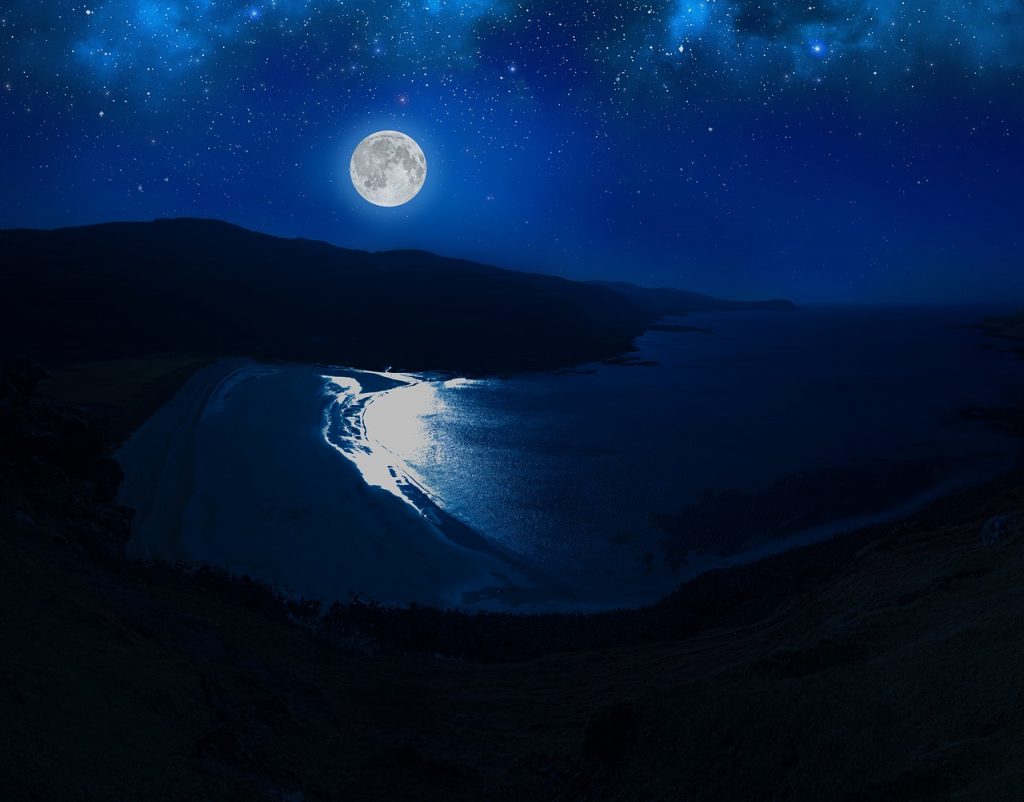 A hotspot for water sports (think water skiing, windsurfing and kayaking) and those in the know, Achmelvich Bay has it all — that is if you’re on a quest for secluded slices of Scottish paradise devoid of noise and people pollution. Located a short distance from Lochinver near Suilven, buckets of ivory sand and artistically appealing rocky patches beckon beach lovers to reap the liberating benefits of the beach at Achmelvich. 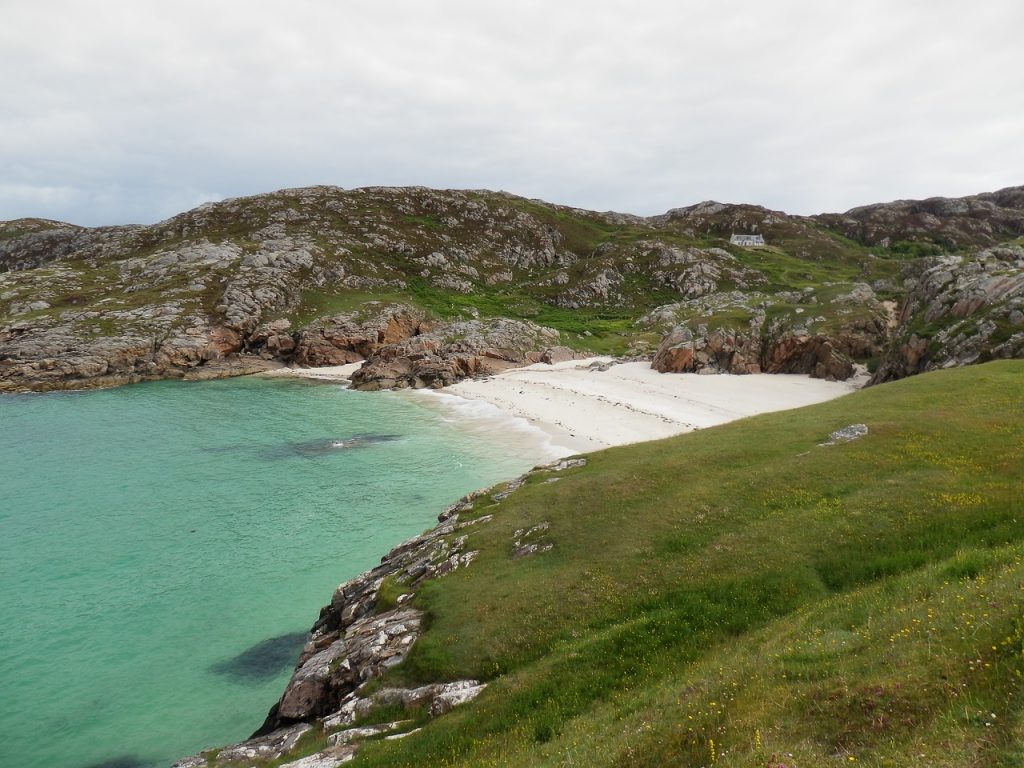