10 Things to Do and See in Old Aberdeen

King's College, Old Aberdeen | © Verino77/Flickr
Old Aberdeen is packed full of interesting buildings, museums to visit, parks and gardens and places to pause and grab a coffee, or something stronger. The best bit is that it is everything is close together, so you can walk along pretty cobblestoned streets, then meander through some of Aberdeen’s most cherished green areas. Here’s our guide to the best bits of Old Aberdeen.

Cathedral
Interior of St. Machar's Cathedral | © Keith Laverack/Flickr
The High Kirk of St. Machar is perhaps the best place to start this guide, as it is from here that the Royal Burgh of Old Aberdeen developed. No longer technically a cathedral, as there has been no bishop here since 1690, St. Machar’s still retains a sense of grandeur and the parts that have fallen into ruin add to this. The Kirk is still used for worship, is open daily and it is definitely worth a look inside. The 16th century ceiling in particular is astonishingly detailed, full of beautiful heraldic carvings.
More Info
Open In Google Maps
The Chanonry, Old Aberdeen Aberdeen, Scotland, AB24 1RQ, United Kingdom
+441224485988
View menu
Visit website
Visit Facebook page
Send an Email
Give us feedback

Park
River Don at Seaton Park | © Lucy Chapman/Flickr
Bought for the city of Aberdeen in 1947, this large expanse of green is a popular place to visit. Not only do students, locals, and visitors use it for picnics and games, but Aberdeen Football Club also train here. Stretching from St. Machar’s all the way to the banks of the River Don, Seaton Park is a mix of flower beds, grassy pitches, parkland with trees, and walled gardens. At 27 hectares, it is one of the largest public green spaces in the city.
More Info
Open In Google Maps
Don Street, Old Aberdeen Aberdeen, Scotland, AB24 1XS, United Kingdom
+443000200292
View menu
Visit website
Visit Facebook page
Send an Email
Give us feedback

If you walk through Seaton Park and along the banks of the meandering Don towards the sea, you come to what used to be known as the Bridge of Don and is now called the Brig o’ Balgownie. This is an ancient bridge, completed in 1320 and comprised of a single Gothic archway, with a 12 metre (39 feet) span and the walkway being over 17 metres (56 feet) above the water. Historians debate exactly who ordered the bridge built, but there is a strong consensus that it was the Scottish King, Robert the Bruce. The bridge no longer sees traffic, as a new one was built further downstream in 1830. It is also mentioned in the poem, Don Juan, by Lord Byron. 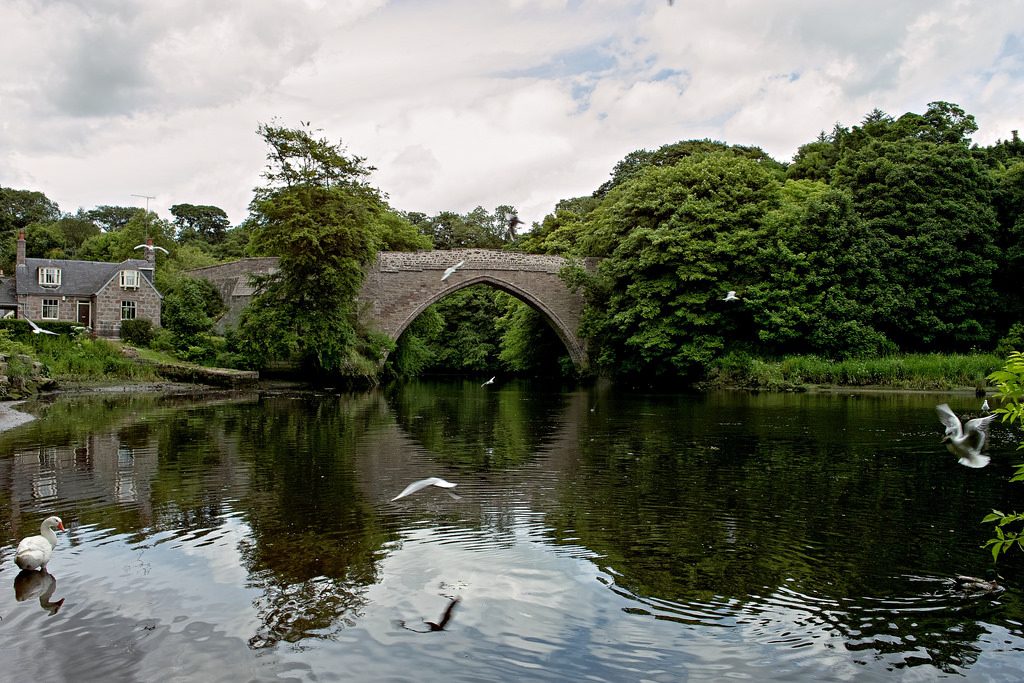 Back in the centre of Old Aberdeen, and near King’s College, the Powis Gate towers are definitely worth a moment of time. These tall towers once flanked the entrance to Powis House. Built from 1833 to 1834, they are a pair of cylindrical towers, topped by Turkish style minarets and both have parapets near the top. Unusual in design, they were recently restored by the University of Aberdeen, who now own them. Due to the 1833 Abolition of Slavery the Leslie family, who owned Powis House and ordered the gates be built, commemorated the freeing of the slaves they owned in Jamaica in the form of a shield on the gates.

Many people come to Scotland to trace their roots and personal tours around kirkyards are common. In Old Aberdeen there is a hidden gem of such a place. Once the parish church of Old Aberdeen, named St. Mary of the Snows, this graveyard is unknown to many Aberdeen residents, it is so well hidden. Although the stones only number in the 40s, there are many others deeply buried here. For a long time it was a place where Catholics met in secret, beginning after the church building fell out of use after the Reformation and this continued for many years. Burials that can be dated are between 1776 and 1934, but these are just those that have been recorded. A visit to the Snow Kirk is a visit to a hidden and lost part of Aberdeen — even the name conjures up an interesting image!

Once the business centre of Old Aberdeen, the 18th century building of the Town House is now in the care of the University, who restored it and use it as a museum. A fine Georgian building, with an elegant clock and cupola, its image is used on the logo of The Architectural Heritage Society of Scotland. The University museum collection was begun in 1727 and is utilised to produce exhibitions that change every few months. Although not the largest of museums, it is welcoming and the displays are always well planned and interesting. Standing in front of the building is a fragment of the original Mercat Cross, where once proclamations were read, fairs held and punishments meted out. 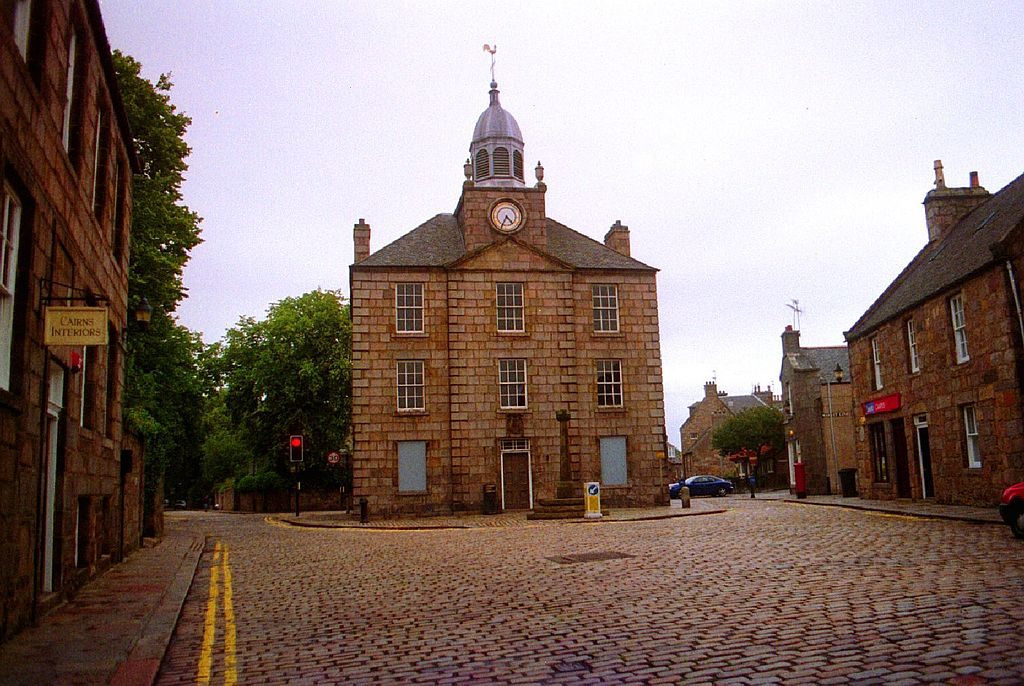 If you love plants, trees, and peace and quiet, then a visit to the beautiful Cruickshank Botanic Garden is a must. This enclave of harmony is spread over 11 acres and has many different elements, from a sunken garden to an arboretum and a rock and water garden to wonderful herbaceous borders — this is a must-see for gardeners and those who love the natural world, or those who simply want to pause and rest for a time.

Although a part of the university, the double-height ground floor is open to visitors and features the Hardback Cafe and a space for exhibitions. It is the building itself that is especially worth a visit, with an award-winning modern design featuring striped external glass and a fascinating internal structure. Outside there is a bronze sculpture designed by Nasser Azam. Opened by the Queen in 2012, this building has since been listed among the most beautiful libraries in the world and it’s not hard to see why. 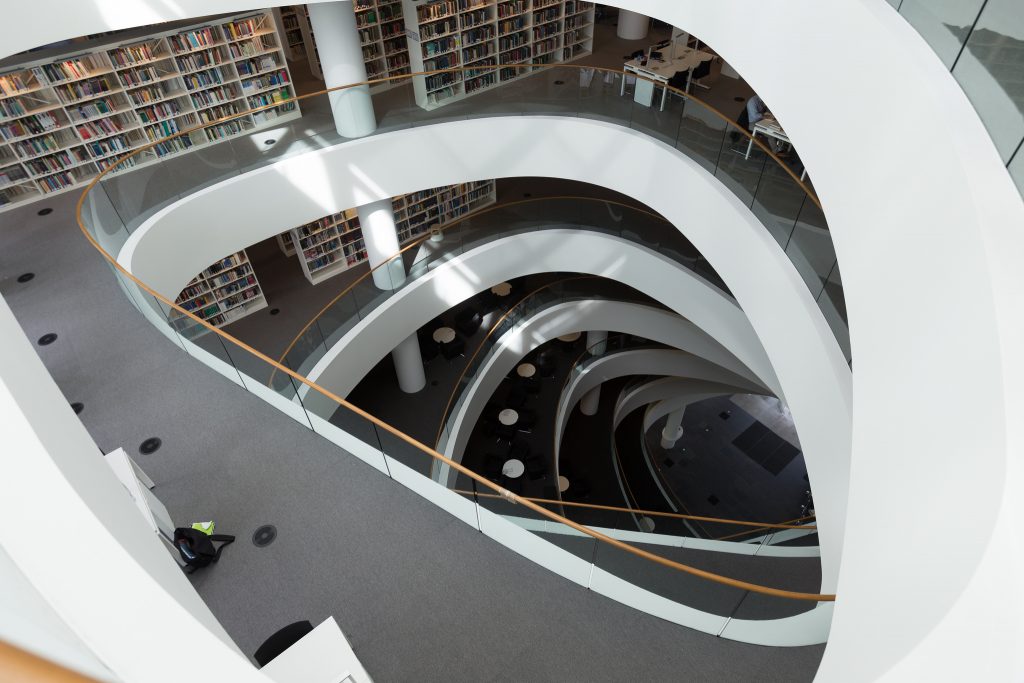 The ancient heart of the University, King’s College was founded in 1495, with construction of the chapel beginning in 1498, the design of which was based on King Solomon’s Temple. Inside, the wooden rood screen and stalls date back to the year of consecration, 1509. This makes the medieval church interior the most complete in Scotland. Other buildings of interest include the Cromwell Tower, Elphinstone Hall and New King’s, all of which add to the architecture of the area. Such is their timeless appeal, you could be forgiven for thinking you are walking around the university buildings of Oxford or Cambridge! 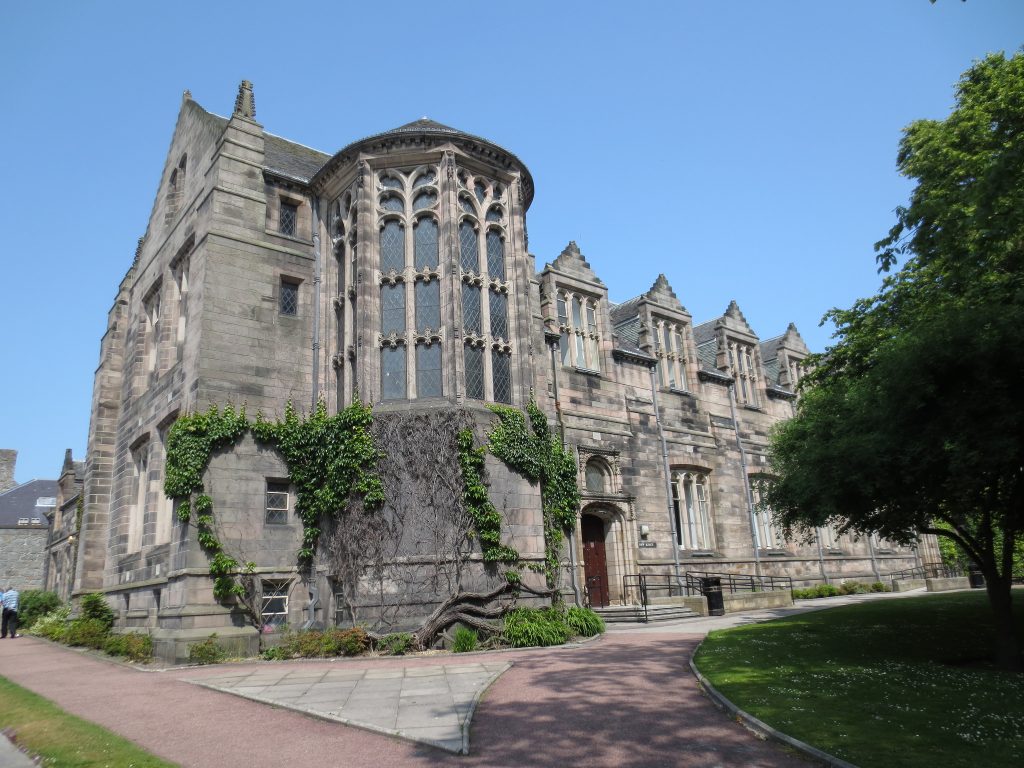 Bar, Pub Grub
Finally in our guide to things to see and do in Old Aberdeen, here’s an excellent place to spend an hour or two, perhaps sampling a pint of real ale, or one of the 140 malt whiskies on offer. The Machar, as it is known, also serves tasty pub grub to help stave off those hunger pangs your Old Aberdeen exploration is bound to have caused. With over 100 years of history and countless thousands of students and academics quenching their thirst while rigorously debating, there is a sense that this wee bar can claim to be the beating heart of the area.
More Info
Open In Google Maps
97 High Street, Old Aberdeen Aberdeen, Scotland, AB24 3EN, United Kingdom
+441224483079
View menu
Visit website
Visit Facebook page
Send an Email
Give us feedback
Give us feedback