10 Gorgeous Walks to Take on the Isle of Skye

Loch Slapin, Skye | © Oliver Clarke/Flickr
Skye is a magnet for walkers, with a wide variety of different options available, from some of the most challenging routes available in the UK to those that are slightly less of a stretch! Here are 10 that should not be missed, all providing that magical beauty that the Isle of Skye is known for.

This walk takes you to the bothy at Camasunary Bay, and gives you outstanding views of the Cuillin mountains, without actually having to climb or scramble. Begin on the road that stretches between Elgol and Broadford, where there is a large layby you can park your vehicle if driving. With views of the sea and the mountains, the walker follows the gravel path west towards Camasunary. The bothy is operated and run by the Mountain Bothies Association, and you can stay there overnight if needed. In total (there and back), the walk should not take much longer than two and a half hours if you do not stop, although with views like this, it will likely take longer as you pause to drink in the splendour, and take a photo (or many!). 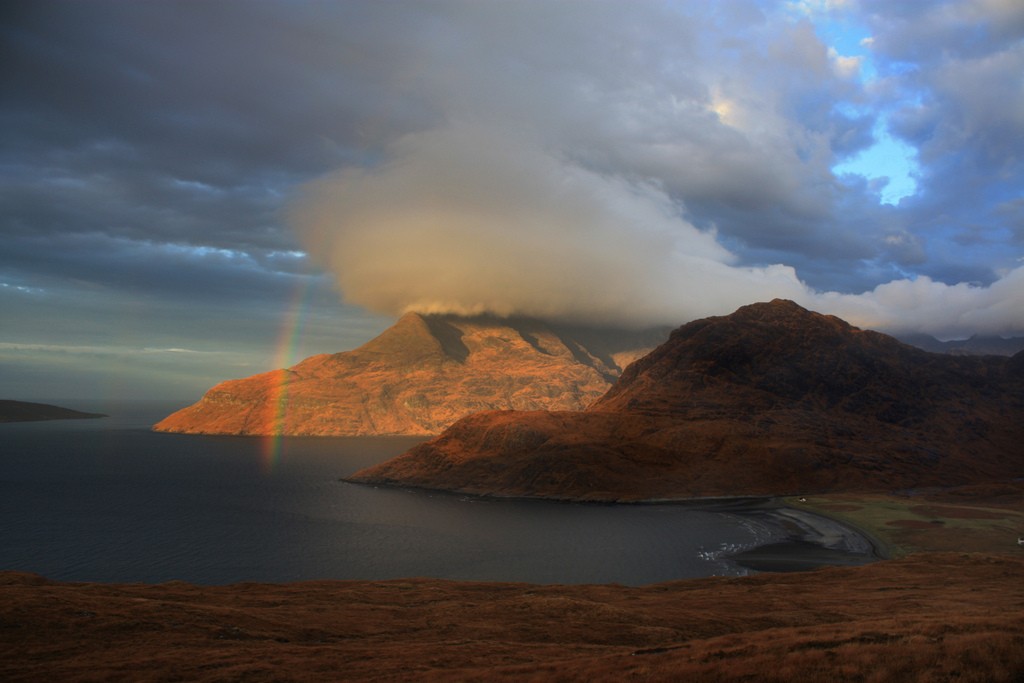 Technically, this walk is along the River Brittle, but the main draw of this glen is undoubtedly the famous aquamarine and turquoise Fairy Pools. At the feet of the Black Cuillin mountains, this is not a long or overly challenging walk, and the walker can either pause and return at the first set of pools, or continue further along to explore the others. If you are driving, park at the Forestry Commission car park and walk from there. In summer there is also a bus from Portree, which also drops you off at the same point. If the weather is good, and you are brave enough, you may want to bring your swimming costume (or wild-swimming wetsuit) and a towel. The incredible clarity of the water and the luscious colours of the minerals are very inviting on a hot day.

Skye is beautiful, but what it doesn’t have many of are sandy beaches, unlike the other islands off the west coast of Scotland, such as South Uist or Harris. The coral beach at Claigan is a notable exception and well worth a short walk. Just north of Dunvegan, this walk is ideally paired with a visit to the castle there. It is not a challenge, passing through farmland, but it can be a bit muddy and slippery when wet. The coral itself is actually the bleached and crushed remains of a kind of seaweed that grows just offshore. On a sunny day the beach appears more like something you’d expect to find in the tropics than Scotland.

The name Oronsay actually comes from the days when Skye was the home of Vikings. Meaning ‘tidal island’ in Old Norse, there are several such places around Scotland. This one can be reached easily, with a gentle walk from the end of the public road down to Ullinish Point, and when the tide is out you can walk across to the island and explore. For a small place, there’s a lot to see, with archaeological remains, wee beaches, long sea caves, a natural arch, cliffs, and stunning views. Just be careful that the tide doesn’t trap you there — unless you come prepared with supplies, water, and maybe a tent, in which case it can all be a part of the adventure!

There are places in Scotland where the past seems very close indeed, and the haunting ruins of the cleared settlement of Boreraig is a good example. In October 1853, when snow lay on the ground, the people of this village and the nearby Suisnish were forcibly removed from their homes and shipped out to Australia to make way for sheep (although many of them died on the voyage, or even before they left Scotland). This longer walk to Boreraig and Suisnish starts and ends at Kilchrist on the road between Broadford and Torrin. There is no roadway into the Strath (from the Gaelic for river valley), just the ruins of a different time. A large area of this valley has now been planted with native trees, grown from seeds collected from others on Skye. There is a beautiful spot to sit and think, just down from the ruins of Boreraig, where the burn (stream) meets the shore as a pretty waterfall.

The Cuillin mountains are split into the Black Cuillin and the Red Cuillin, and Glen Sligachan, where this walk starts, divides the two. A long walk, and not for those who doubt their fitness, this is a good introduction to the mountains of Skye, and the views from the top of Sgùrr na Stri — Gaelic for Mountain of Strife — are quite frankly incredible. As this walk is not a technical ascent, it is possible for non-mountaineers to enjoy the heights, without many of the associated risks. That said, being prepared, with appropriate clothing, footwear and other gear, is essential.

This walk begins at Orbost Farm and follows a well-defined path to the three sea stacks known as Macleod’s Maidens. It is not a short walk, but the path is not too challenging, full of the features that make Skye so interesting to visit. The stacks themselves — the mother and her two daughters — are best viewed from the side, rather than above, and the cliff-top path requires care, especially if you have children or animals. Returning the same way may sound boring, but the switch in direction means a whole new raft of views open up, taking in cliffs, the sea, enchanting wee burns, newly planted woodlands and another of Skye’s cleared villages.

The Old Man of Storr

This excellent walk, along a well maintained path, is one of the most-photographed and popular — with good reason. The Old Man himself is an iconic pinnacle of rock that can be seen for many miles around. Once up at the top of the Storr, the highest point on the Trotternish Ridge, the views across to the island of Raasay and the mainland of Scotland beyond are stunning. This landscape was formed some 60 million years ago as a result of a vast landslip, which left the towering cliffs and jagged edges that are beloved by eagles, geologists, and photographers alike. The Old Man also recently appeared as a location in the movie Prometheus.

This is not a walk to do on a misty day; the cliffs are unfenced and appear suddenly and without warning. On a clear day, however, it is an essential stop for the visitor to Skye. The views out to Uist are spectacular, and made even more exciting by the sea eagles that often float on the thermals just along the top of the 300 metre (1000ft) cliffs. Head to the northernmost point of this peninsula and you can also see the strange rock formation called The Giant (Am Famhair), a rock arch that lies a little way off the cliffs.

This is perhaps the ‘must-do’ walk in Skye. The otherworldly landscape formed by the Trotternish landslip has created incredible views, sudden and surprising plateaux, and is home to rare and interesting wildlife. The Quiraing is equally worth visiting when visibility is clear, or when it is cloudy and misty, as this can lead to unique photo opportunities and add to the eerie and strange feeling of the area. If the photo looks familiar, then it may be because it has featured as a location in several films, including Stardust and Highlander.

The Quiraing © Chris Combe/Flickr
Give us feedback