10 Epic Places In Scotland Even Scots Don't Know About

St Peter’s Seminary | © Magnus Hagdorn / Flickr
Sometimes all it takes is looking that bit closer or trekking a tad further for the magic to reveal itself. The beauty with Scotland is that it’s always full of surprises! Just when you think you’ve seen it all, explore our guide to some epic places even us Scots don’t always know about.

Up until recent events resulting in its demolition, a lone ghost village stood sadly in Argyll and Bute on the west coast of the Cowal Peninsula. Derelict and abandoned, Polphail Village resembled a post-apocalyptic town from a zombie movie. It was designed as a residential area during an oil boom in the 1970s, but, due to a lack of prosperity in the local industry, Polphail never saw any people. Years went on and the weeds thickened amongst the abandoned discordance of discarded buildings. In 2009, a group of artists embellished this surreal sight with striking graffiti art, only adding to the despondent yet evocative tone. 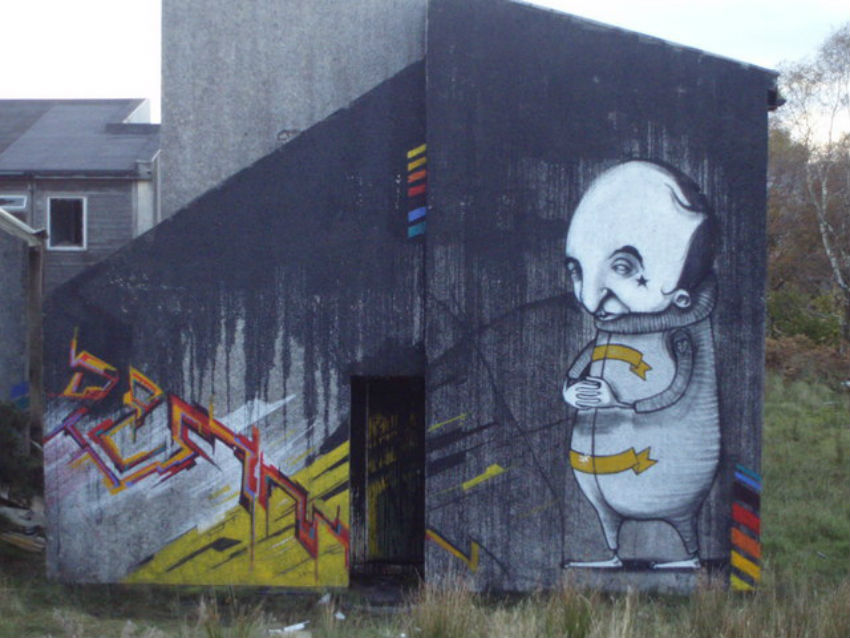 A torrent of powerful tidal burst, the Corryvreckan Whirlpool is the third largest whirlpool in the world. This ritualistic dance between waves of different clans occurs in a thin strait between the isles of Scarba and Jura. Caused by an altercation between forceful Atlantic currents and atypical water topography, this intricate tidal system amalgamates to a flurry of swirling whirlpools, rambunctious waves and tenacious ripples, amidst other flustered surface effects. Some say divers have referred to this contentious area as ‘potentially the most dangerous dive in the UK’. 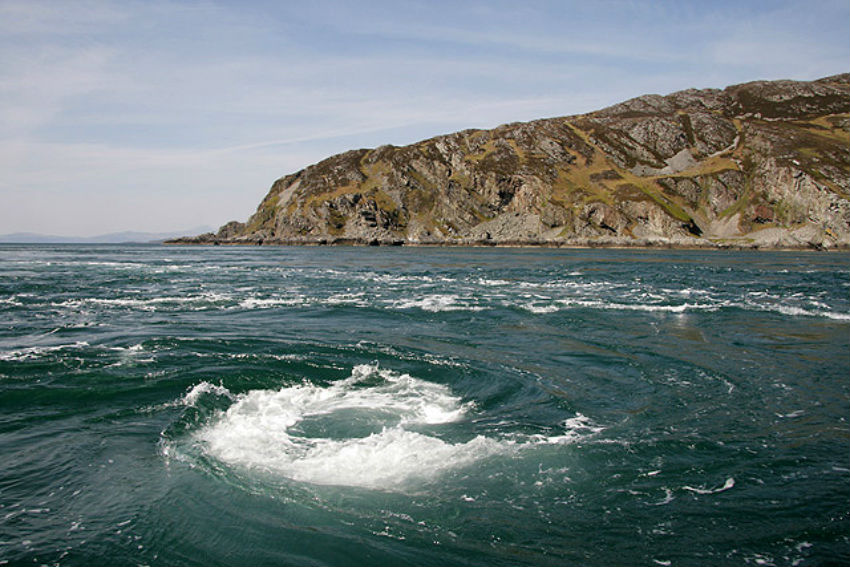 Scotland’s cornucopia of castles creates a never-ending point of intrigue to architects, historians and tourists alike. And yet, undoubtedly the most alluring and certainly colourful of them all is Kelburn Castle near Fairlie in North Ayrshire. Standing out from the crowd, this quirky castle received a lick of paintwork like no other back around 2007 — a head to toe graffiti extravaganza! The hypnotic graffiti art embellishing Kelburn is the masterpiece of four Brazilian graffiti artists at the request of Lord Glasgow, who arguably had the most genius solution ever after hearing the concrete facing needed replaced! Trippy and wonderfully terrific. 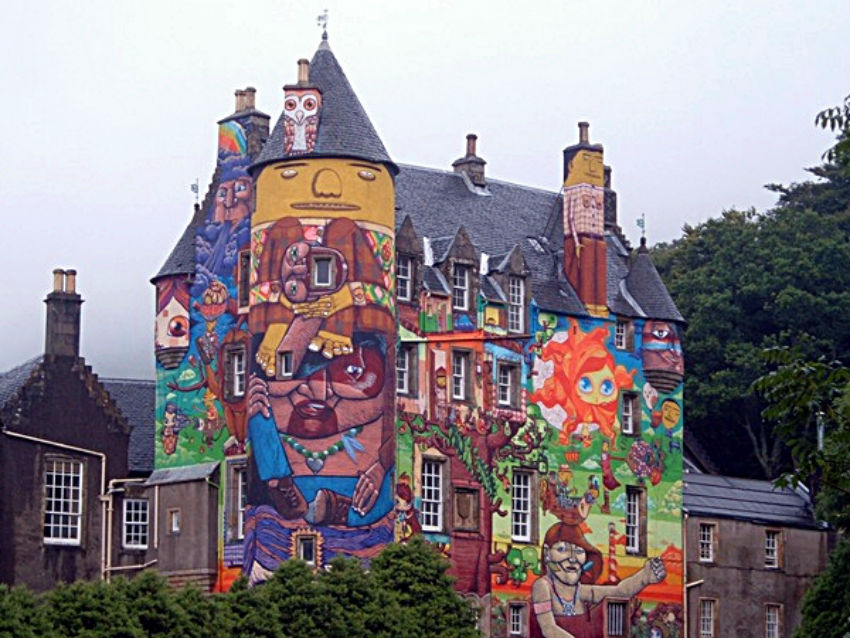 An open-ended sensory feast made for thinkers and conjurers, the Garden of Cosmic Speculation is suited to those times when your thoughts wage war. This meticulously planned sculpture garden is the work of profound landscape architect and theorist Charles Jencks, who turned his 30-acre grounds at Portrack House near Dumfries into a carefully constructed mathematical equation. Drawing upon his love for science and maths, Jencks explores Fractals, Black Holes and modern cosmology through the cunning formulae in his garden. Although scarcely seen, this thought-provoking wonderland tends to open one day each year. 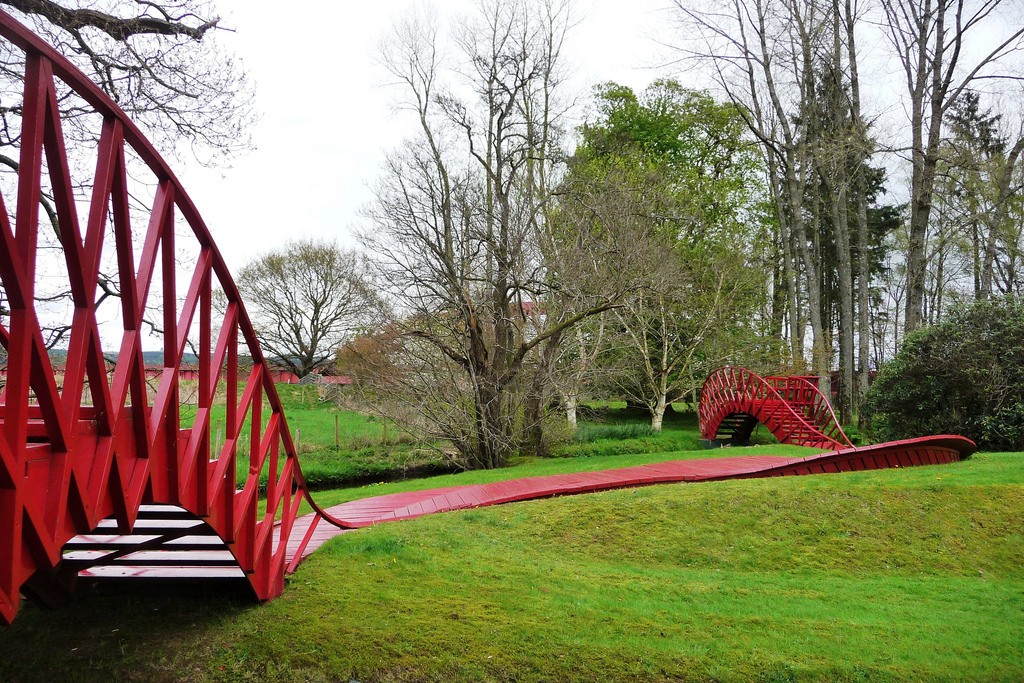 As the first Tibetan Buddhist Centre to form in the West, Kagyu Samye Ling in Eskdalemuir is a place of constant calm and refreshing rejuvenation. This monastery and international centre of Buddhist training is a sanctuary of great intrigue, with the architecture as engaging as its philosophy. Gilded temples, stupas, gardens and Buddhist statues adorn the peaceful premises, which is home to some 60 people. Along with ensuring the preservation of Tibetan arts and crafts, this training centre teaches Buddhist meditation and philosophy in tune with the Karma Kagyu aspects of Tibetan Buddhism. As a symbol of the centre’s integral role in Scottish culture, a special tartan was designed in 2010 for the Sangha. 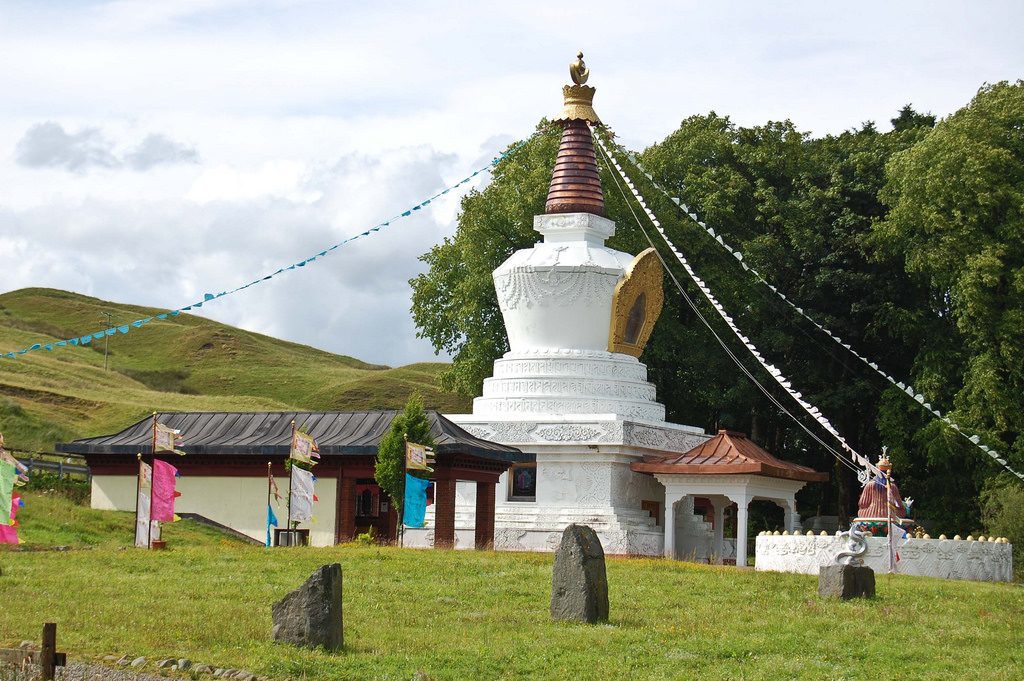 Yes, Scotland has a secret subterranean nuclear command bunker. Tucked away beyond the deepest depths of an unassuming farmhouse sits a tunnel leading to a bunker the size of two football pitches. Strategically placed in a surreptitious spot to provide a government control centre in the event of a nuclear war, this two-floor bunker was hidden from the public knowledge for over four decades. Today, the bunker serves a different role for curious minds wanting to know more and explore.

St Peter’s Seminary, Cardross resembles a dystopian spaceship or a fragmented memory from a distant dream. An architectural work of great substance, this derelict Roman Catholic seminary is praised as a resplendent example of modernist architecture in Scotland, with its strong modernist and brutalist essence in line with the wonders of Le Corbusier. Although abandoned and left standing alone since the late 1980s, this extraordinary structure is deemed a ‘building of world significance’ by DOCOMOMO, the international architecture conservation organization. Space and Light, a documentary by filmmaker Murray Grigor and works by Glasgow artist Toby Paterson are just two examples of the many minds in awe of this otherworldly edifice. 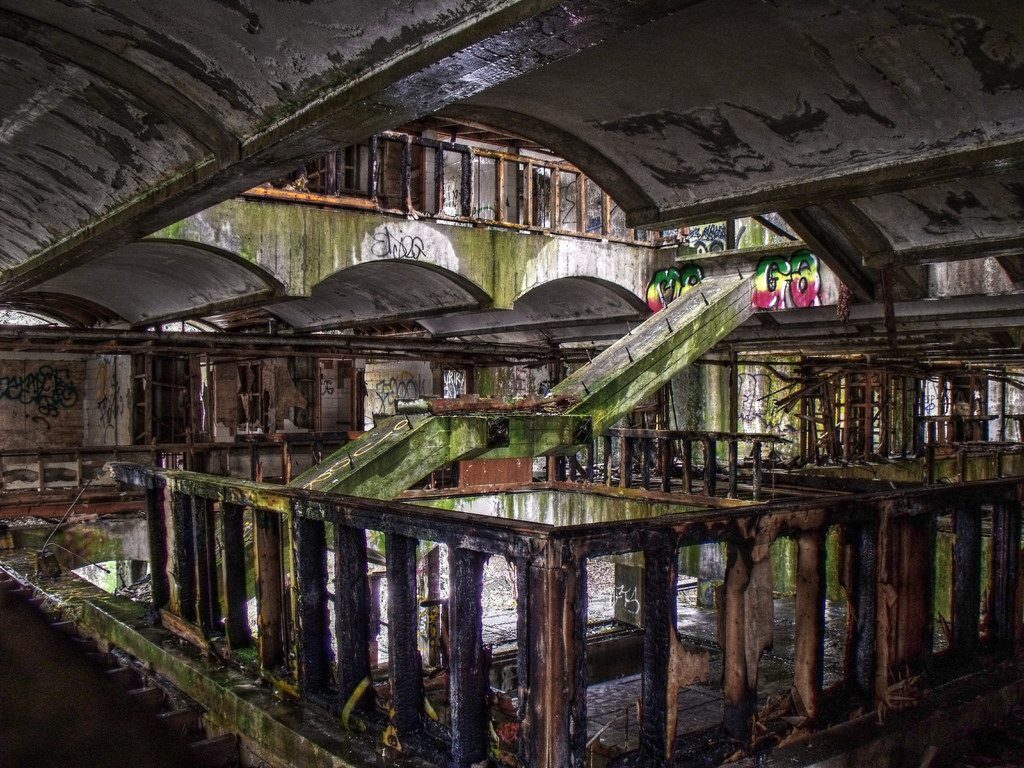 Little Sparta is a portal to a creative realm where wit, poetry, horticulture and art collide to present an astounding visual and mental feast. This discerning work of art resides in the Pentland Hills and is regarded as the masterpiece of artist and poet Ian Hamilton Finlay and his wife Sue. The name ‘Little Sparta’ is a facetious play on Edinburgh’s nickname as ‘The Athens of the North’, while the cunning combination of poetry, craftsmanship and philosophical musings reveal themselves throughout the 275 artworks. The chorus of sculptures, temples and brilliant poetry uttered on concrete slabs (Finlay’s famous ‘garden poems’) amount to a harmonious artistic and soulful excursion. 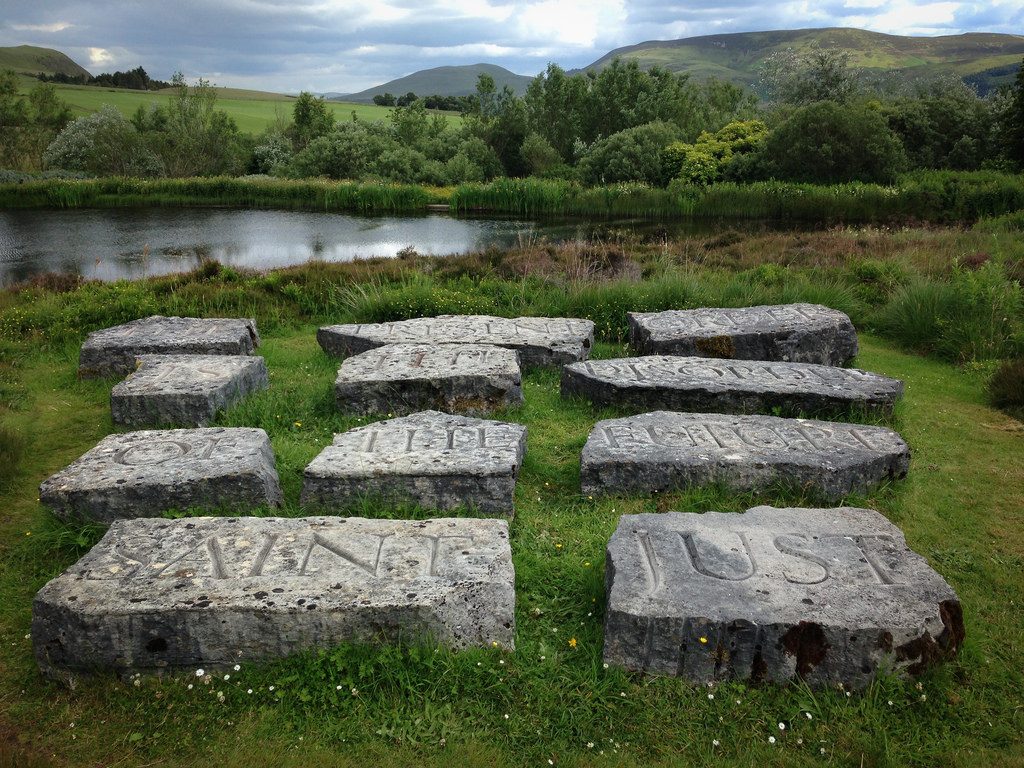 If SpongeBob were Scottish, he would no doubt reside in the Dunmore Pineapple! This eye-catching building in Falkirk’s Dunmore Park was crafted in 1761 and served as an epic birthday gift for the Earl of Dunmore’s wife. Carved to perfection, the masonry work is as impressive as the pineapple itself. It should come as no surprise that this fruity structure was crowned as ‘Scotland’s most bizarre building’. 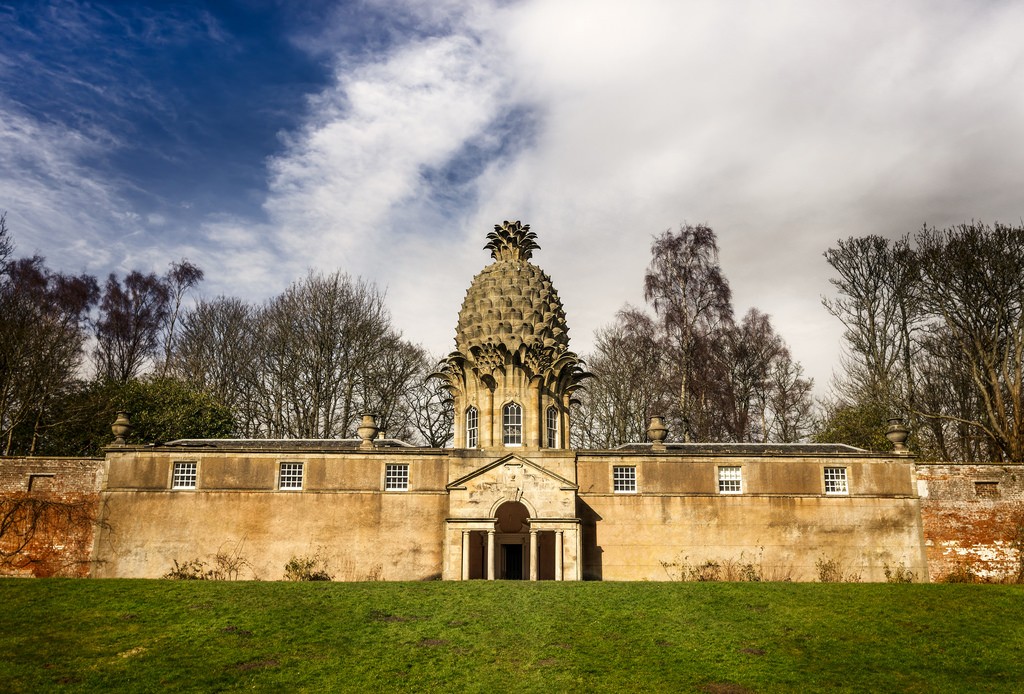 Home to stunning scenery and untamed terrain, the cherry on top of beautiful Skye is its association with dinosaurs. Basking on the beach at An Corran, Staffin, incredible dinosaur footprints forge a physical bridge to a bygone past, offering a glimpse into a very different Skye. The prints are thought to be around 165 million years old, while the creatures in question were identified as a group of herbivores known as Ornithopods. 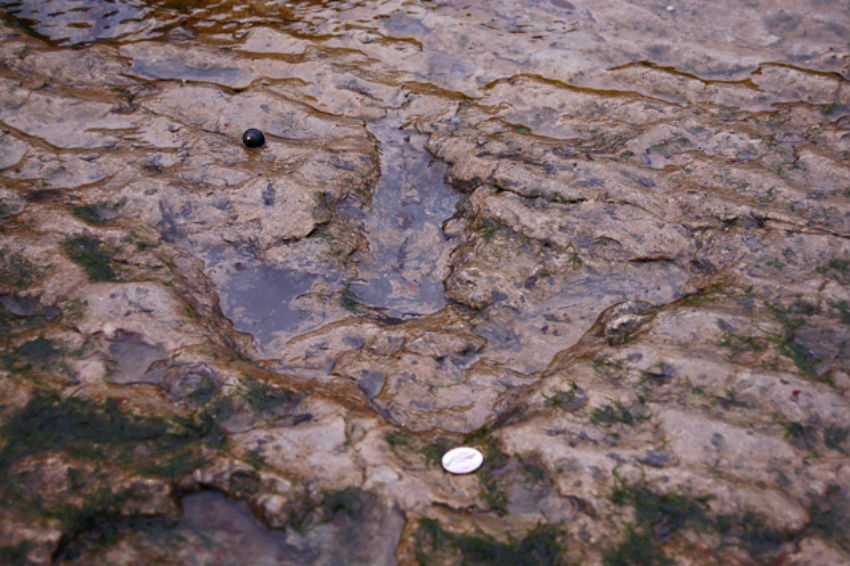