Where to See the Game of Thrones Doors in Northern Ireland 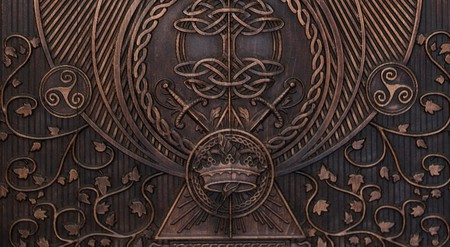 When some of The Dark Hedges’ trees blew over during a storm, the wood from two of the felled trees was made into 10 intricately carved doors, each of which displays a scene from Game of Thrones. These doors were then gifted to various local landmarks around Northern Ireland, each of which sits near a filming location from the show. Northern Ireland’s tourism board has released a passport, which you can print off and complete with stamps. Each site has their own stamp, so the Game of Thrones Door Tour could be the perfect road trip for the Westerosi in your life.

Fittingly, the first door portrays the opening sequence of the show, with a map of Westeros and sigils of the show’s houses. The Cuan is an award-winning hotel and restaurant in Strangford, County Down, specialising in sourcing the freshest ingredients for their dishes. Ardglass Harbour is only 10 minutes away, which explains the presence of so much fish on the menu. The Cuan serves a broad variety of seafood dishes, and we recommend settling in for a bowl of chowder before a day trip to nearby Castle Ward, which might be more recognisable as Winterfell itself. 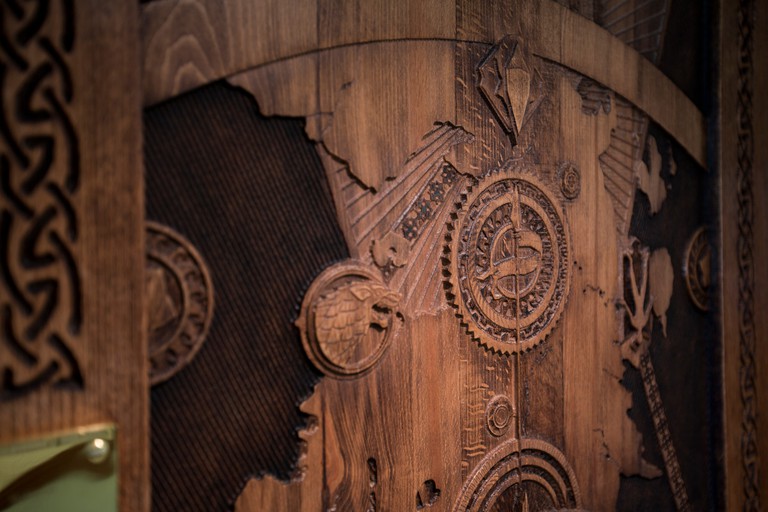 Door 1 at The Cuan | Courtesy of Tourism NI 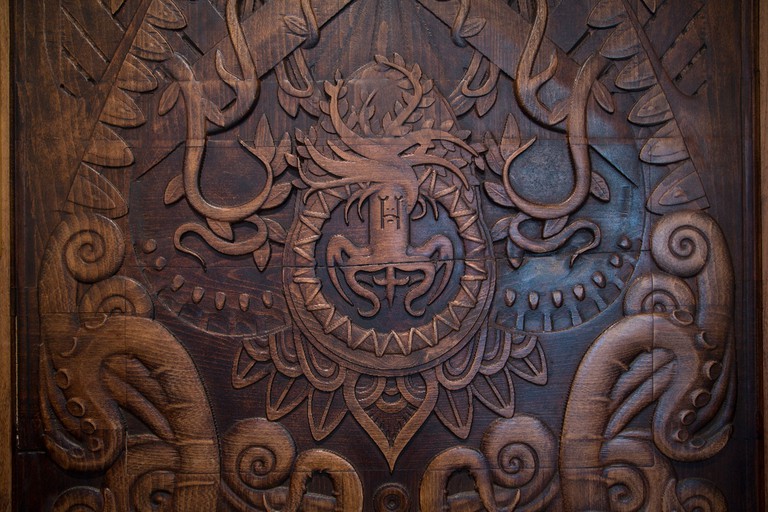 Door 2 at Fiddler's Green | Courtesy of Tourism NI
Fiddler’s Green is a pub and B&B at the tip of the Ards Peninsula, and the location of the second door. Located at the edge of ‘The Narrows’, the point at which Strangford Lough meets the sea, it’s actually directly opposite Strangford town. Fiddler’s is known for the character of its bar, its live music, and its excellent Guinness. Its door shows the struggle between House Bolton and House Greyjoy, with Greyjoy’s kraken rising from the bottom of the door. Nearby Castle Quintin is a 12th-century Anglo-Norman castle that also served as Stokeworth in season five.
Open In Google Maps
10 Church Street, Portaferry, Newtownards, Northern Ireland, BT22 1LS, United Kingdom
+442842728393
Visit Website
Give us feedback

Restaurant, Irish, Beer, European, $$$
Facebook
Email
Twitter
Pinterest
Copy link
Share
Map View
Nestled at the foot of the Mourne Mountains lies Percy French, a restaurant attached to the renowned Slieve Donard Resort and Spa in Newcastle, County Down. The folks behind Percy French are clearly proud of their door, as they’ve added ‘The Westeros Tomahawk’ to their menu, a 20-ounce steak served with a Valyrian Steel-inspired knife. Down’s Tollymore Forest Park appeared in the very first episode of Game of Thrones when the Starks found their direwolves, and the door reflects one of these wolves in particular (no spoilers!).
Open In Google Maps
Newcastle, Northern Ireland, BT33 0AH, United Kingdom
+442843723175
Visit Website
Give us feedback

Blake's of the Hollow 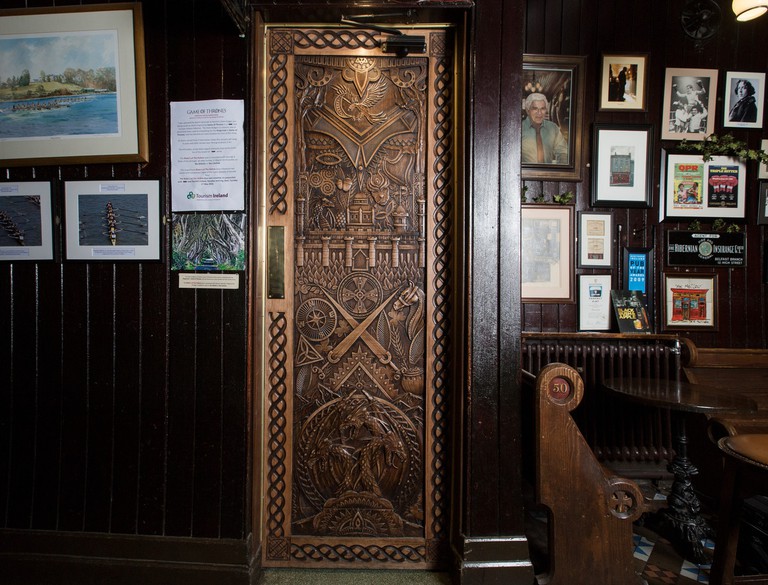 Door 4 at Blake's | Courtesy of Tourism NI
The frontage and bottom bar at Blake’s have barely changed since the Victorian era, but this Enniskillen bar manages to seamlessly blend the old with the new. The ground floor bar is the cosiest, while the upper-level bars get trendier as you ascend the stairs, and the two attached restaurants complete the building. Pollnagollum Cave is a part of the Marble Arch Caves Global Geopark and acted as Hollow Hill during season three. The door at Blake’s depicts the Targaryen rise to power, with the dragons dominating the base of the door.
Open In Google Maps
6 Church Street, Enniskillen, Northern Ireland, BT74 7EJ, United Kingdom
+442866322143
Visit Website
Give us feedback

Owens’ Bar is in possession of what might be the grandest door on the list, with the Night King and the White Walkers dominating the frame, looming over the Stark sigil. Owens’ is a small traditional pub with a beautiful wooden bar that complements the door surprisingly well. Nearby, Downhill Beach stood in for Dragonstone, while a trip to Binvenagh and the Antrim Plateau places visitors in the middle of the Dothraki Grasslands. 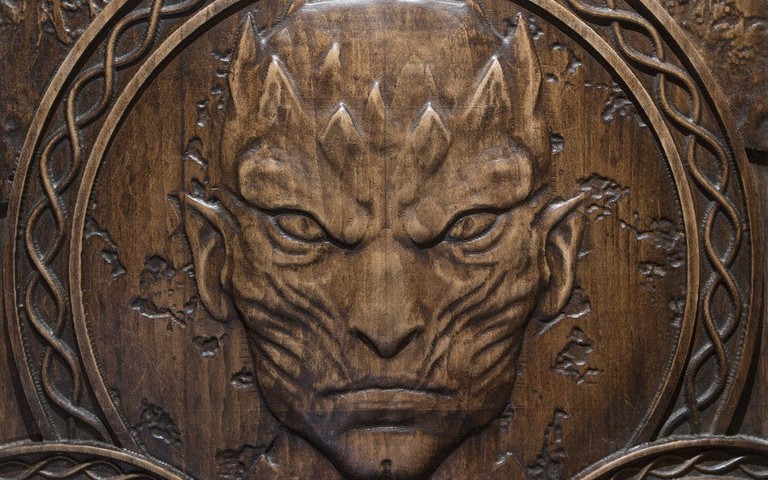 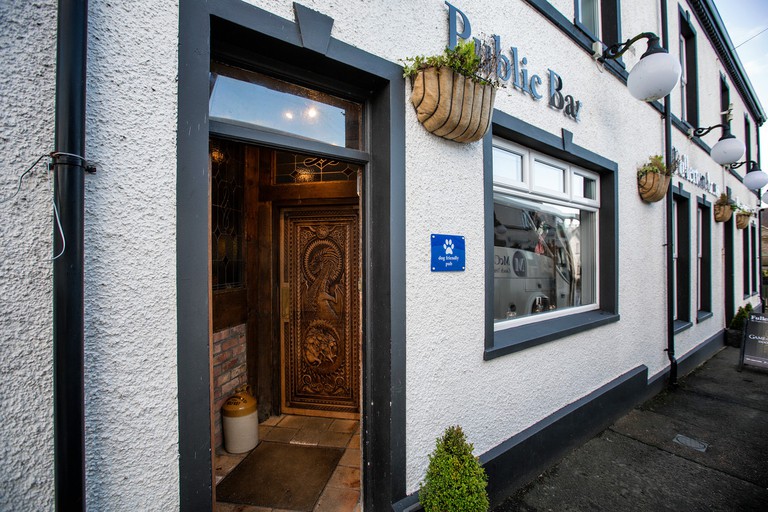 Door 6 at The Fullerton Arms | Courtesy of Tourism NI
The Fullerton Arms Hotel in Ballintoy sits between The Giant’s Causeway and Carrick-a-Rede Rope Bridge, making it an excellent pit stop on either your Doors of Thrones journey or just a Causeway Coastal Route road trip. Ballintoy Harbour is synonymous with the Iron Islands, and many of the hotel’s rooms come with a sea view. Its door shows Drogon gripping Dothraki stallions in his claws.
Open In Google Maps
22 Main Street, Ballintoy, Ballycastle, Northern Ireland, BT54 6LX, United Kingdom
+442820769613
Visit Website
Give us feedback 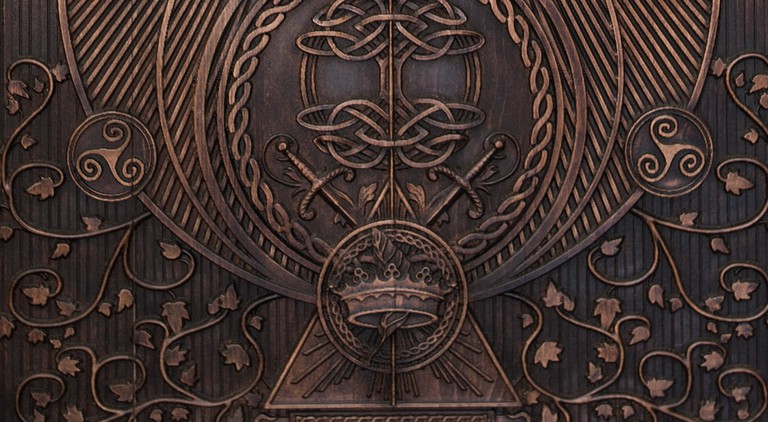 Mary McBride’s was, at one point, one of the smallest bars in Ireland. Now, it’s a charming hub of music and craic, as well as the host of the eighth door. “Valar morghulis. Valar dohaeris,” proclaims the centre of the door, and Arya’s journey through Braavos is a major theme. Several filming locations are nearby, including Cushendun Caves, Murlough Bay, Carnlough Harbour, and The Glens of Antrim. 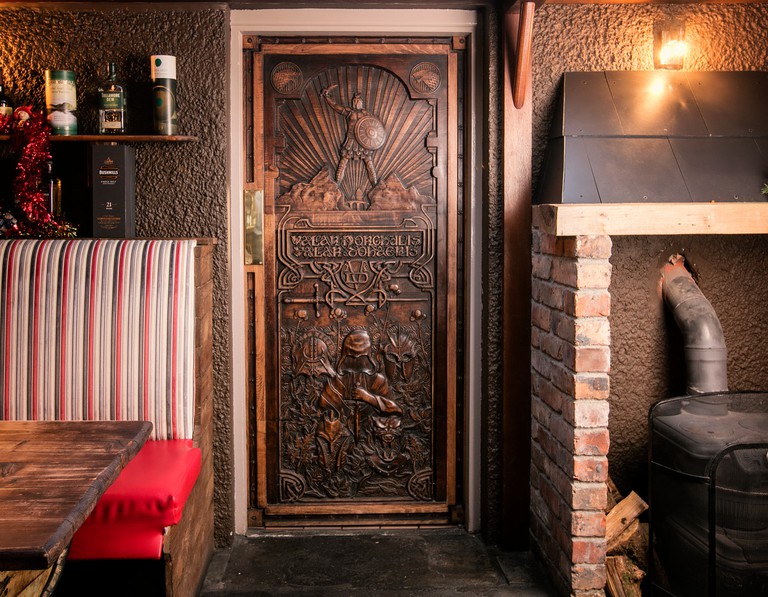 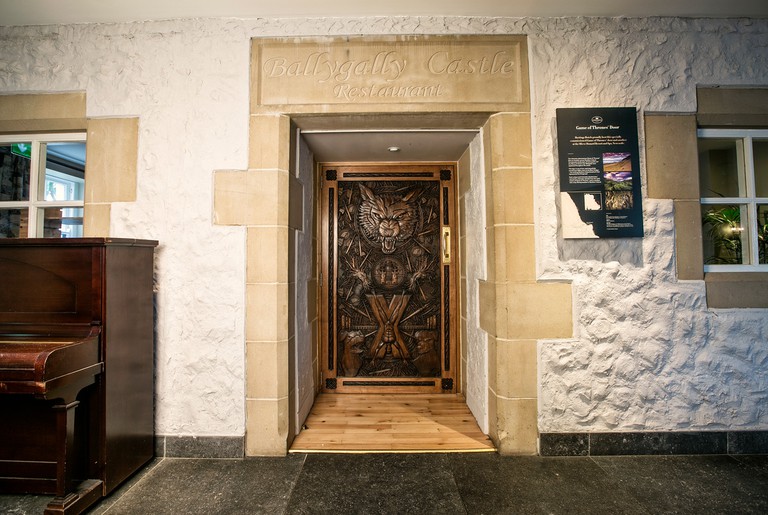 Door 9 at Ballygally Castl | Courtesy of Tourism NI
Ballygally Castle Hotel is perched on the Antrim Coast, 26 miles (41.8 kilometres) from Belfast and very close to Larne. It’s the only 17th-century building in Northern Ireland that’s still used as a residence today, and legend has it that a (harmless) ghost haunts it. Its door portrays the ‘Battle of the Bastards’, and like Percy French, the hotel is proud of their door, as they offer a Game of Thrones-inspired afternoon tea service, including sweet treats that represent each of the lands of Westeros. Cairncastle has been shown in the show on several occasions, including in the very first episode, so it’s worth a look for Game of Thrones buffs.
Open In Google Maps
Coast Road, Ballygalley, Larne, Northern Ireland, BT40 2QZ, United Kingdom
+442828581066
Visit Website
Give us feedback 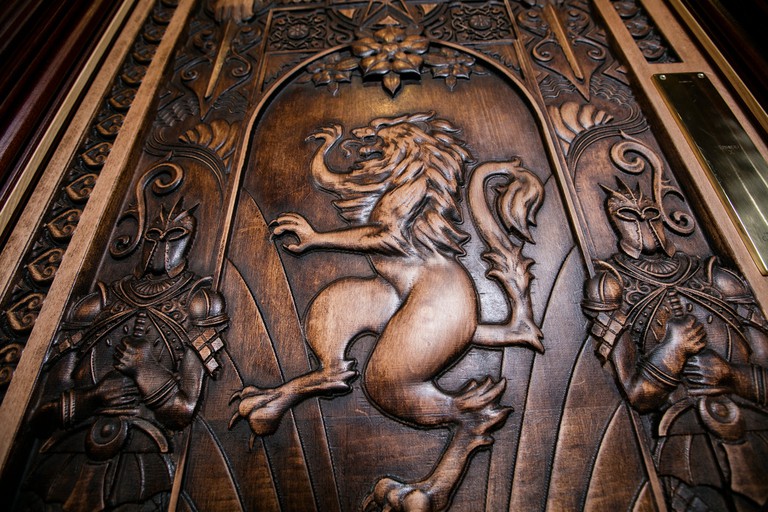 Door 10 at The Dark Horse | Courtesy of Tourism NI
The Dark Horse is a bar and coffee bar in the heart of Belfast’s Cathedral Quarter, tucked down the same alleyway as The Duke of York and several other bars. The door at The Dark Horse provides a broad overview of Westeros’ state of affairs at the end of season six, which is fitting, as the door is supposed to represent all the filming that has taken place in Belfast. The door also provides some clues about the parentage of Jon Snow, but again, no spoilers here.
Open In Google Maps
30 Hill Street, Belfast, Northern Ireland, BT1 2LB, United Kingdom
+442890237807
Visit Website
Give us feedback
Give us feedback