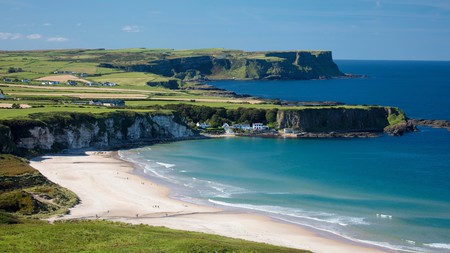 Bag a set of wheels – the coast of Northern Ireland is road-trip heaven. It’s reasonably sized, so your journeys are short, which means more time to stop and explore. Pack your swimmers and walking boots – there are beautiful beaches and nature reserves to explore – and don’t forget a smart outfit or two, the cities offer plenty of culture. To help you plan your next adventure, here is how to create the ultimate road trip in Northern Ireland.

Start planning your adventure in Northern Ireland today. Book your hotel or experience with Culture Trip and use the code CTIE40 to get £40 off.

Which route should I take?

Take the Causeway Coastal Route – the most exciting road trip in Northern Ireland – from Belfast to Derry/Londonderry. It hits many of the major coastal stop-offs, including National Trust sites and a handful of Game of Thrones filming locations. It’s also relatively short, meaning there’s flexibility should you wish to stay a day or two longer in a destination. The following five-day itinerary, though, will serve most road-trippers well.

Top tip: No matter when you plan to come – though you will aim for the summer months ideally – you’ll need to pack for a variety of weather conditions. Northern Ireland is famous for its unpredictable skies, so pack for light rain, afternoon heat, spring showers and wind. 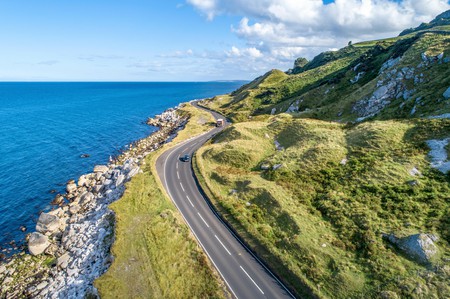 Day 1: Start your road trip with a cultural excursion in Belfast

Start your trip in Belfast, the capital of Northern Ireland. Stroll through the cobbled streets of the Cathedral Quarter and enjoy an Ulster fry-up in St George’s Market. Before you drive out of town, grab a picture of Samson and Goliath – two giant, yellow shipbuilding cranes that have become a quirky tourist attraction.

A 30-minute ride will take you to Carrickfergus, the first stop of the tour and a town home to one of the best-preserved Norman castles in Ireland. Having survived 800 years – plus numerous assaults by the Scots, Irish, English and French – it now houses an interesting collection of historical artefacts and cannons.

Then head 20 minutes north to The Gobbins, a 2mi (3km) walk along the cliffs of Islandmagee. It’s a rather spectacular route carved into the cliffside more than a century ago for Edwardian tourists.

See the route for Day 1. 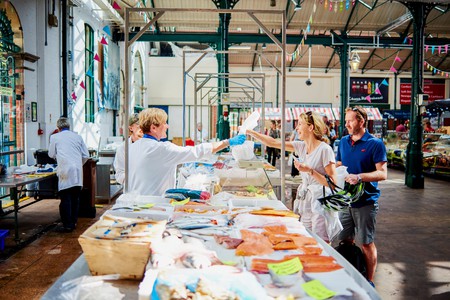 Day 2: Discover the Glens of Antrim

Day 2 starts at Glenarm Castle and Gardens, a horticulturist’s dream. You can explore the oldest walled gardens in Ireland and enjoy a 19th-century afternoon tea in the Mushroom House. Come in May to walk among thousands of tulips during the annual tulip festival.

Next, head to the Glens of Antrim. There are nine glens to explore; stop at Glenarm and tackle the walking trails of Glenarm Forest. If you stroll by the river, keep your eyes peeled for kingfishers and otters.

Then travel to Cushendun, a beautiful harbour town modelled on Cornish villages, to visit Glenmona House, a grand estate and home to the endangered red squirrel.

See the route for Day 2, including several alternative routes through the Glens of Antrim. 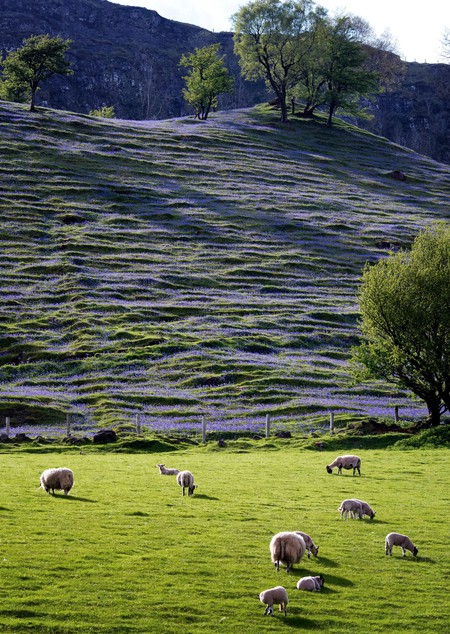 Things are about to get windy as you head north up the coast. Your first stop of the day is at Torr Head, an enchanting cove only 13mi (18km) across the sea from Scotland. This was a lookout for Atlantic and transatlantic ships two centuries ago, and has fantastic views of Rathlin Island. Bring your binoculars to spot the puffin population on Rathlin and dolphins and porpoises in the water.

Your next destination, Ballintoy, the fictional capital of Pyke and (in real life) home to beautiful church buildings and a harbour, actually featured in a Game of Thrones episode. White Park Bay, a short walk from Ballintoy, has a sandy beach, rocky shores and views of the Causeway coast.

See the route for Day 3. 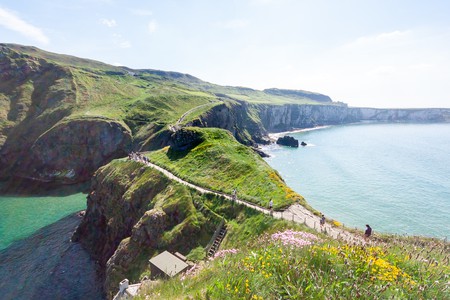 Day 4: Explore myths and legends at the Giant’s Causeway

Day 4 will see the longest drive on the entire Causeway route, at just under four hours. However, you’ll also arrive at Unesco-listed heritage site the Giant’s Causeway, a phenomenal 40,000-basalt-rock formation. Legend says that it was created by Irish giant Finn MacCool (Fionn mac Cumhaill in Gaelic) to meet his Scottish enemy.

Top tip: park in the nearby town of Bushmills and take the shuttle bus – it will save time. Also remember, you don’t need to pay to visit the Giant’s Causeway. Enter via the alternative route by the Visitors Centre to avoid the fee.

When you have fully explored the site, drive to Dunluce Castle, another Game of Thrones location. Today it’s one of the most photographed ruins in Northern Ireland and a favourite for location scouts (it also hosted Jackie Chan’s 2003 film The Medallion).

See the route for Day 4. 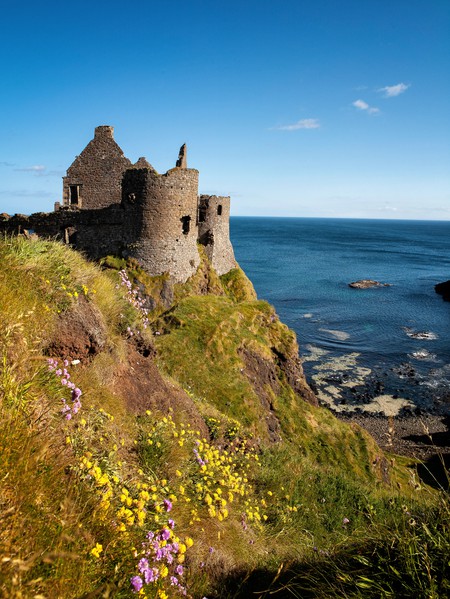 The dramatic location of Dunluce Castle made it a perfect filming spot for ‘Game of Thrones’ | © scenicireland.com / Christopher Hill Photographic / Alamy Stock Photo

Day 5: Finish the trip in Derry/Londonderry

First up today is Downhill Demesne, a National Trust site with the ruins of an 18th-century mansion, the cliffside Mussenden Temple (modelled on the Temple of Vesta in Rome) and a walled garden. From here, travel inland to Roe Valley Country Park, with more wildlife than you can count and more forest than you can hike. The park is on the outer region of Limavady, on the west coast.

The last stop is the border city of Derry/Londonderry. Explore the 400-year-old city walls and step across the S-shaped Peace Bridge (an acknowledgement that the road to peace is never a simple one).

See the route for Day 5. 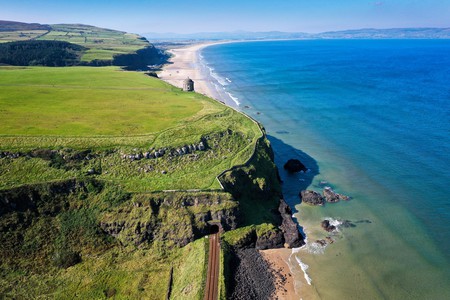 Where to stay on a road trip in Northern Ireland?

The Fitzwilliam Hotel, for a cosy start in Belfast 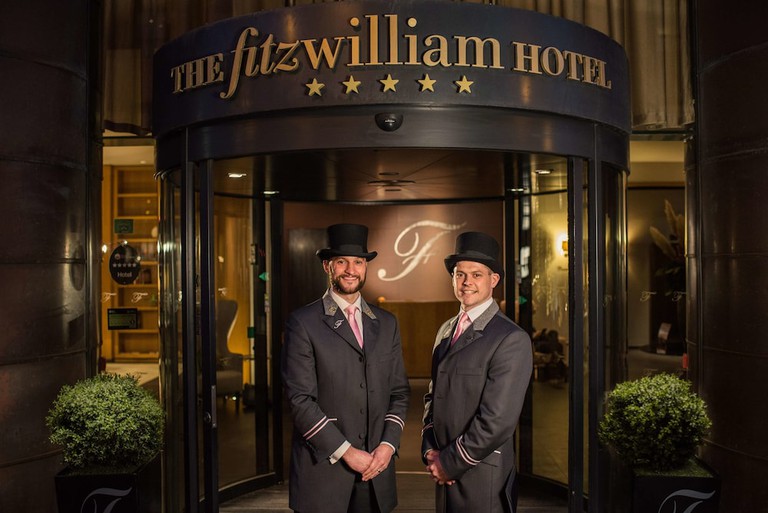 Upon entering the Fitzwilliam, you’ll be greeted by an open fire framed by tall bookshelves and beige sofas – it feels like a home from home. The location is perfect too; just a couple of steps from the grand Opera Hall and only five minutes to Donegall Place, the main shopping street in Belfast. 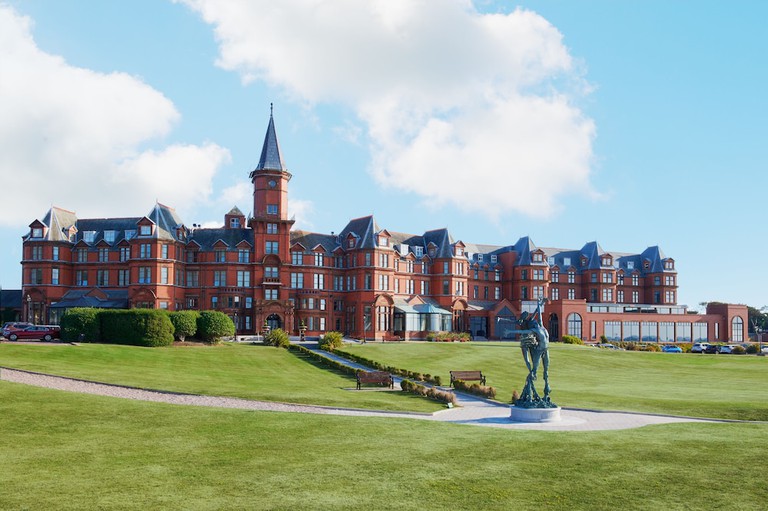 The award-winning Slieve Donard Hotel and Spa, sat at the foot of the Mourne Mountains, is on 2.5ha (6 acres) of beautiful private gardens. If you can drag yourself from the hotel, you’ll find heaps of local attractions and nature spots showcasing the best of the Northern Irish countryside. After a day exploring, fuel up on grub from one of the many hotel restaurants.

Start planning your adventure in Northern Ireland today. Book your hotel or experience with Culture Trip and use the code CTIE40 to get £40 off.