How Was The Magnificent Giant's Causeway Formed?

Northern Ireland’s most popular tourist attraction in 2016, the remarkable Giant’s Causeway rock formation draws hundreds of thousands of visitors annually to marvel at its approximately 40,000 neatly interconnected basalt columns. Here we take a deeper look at how this UNESCO World Heritage Site and national nature reserve was created, taking into account both the scientific and mythical backstories.

Irish folklore holds that the vast Giant’s Causeway rock formation in scenic County Antrim was built by Fionn mac Cumhaill – a mythical warrior-hero who is depicted as a giant in some legends – so that he could make his way towards Scotland to fight a challenger there. Unsurprisingly, geologists put forth a slightly less whimsical explanation.

According to the latter, the tens of thousands of basalt columns that make up the Giant’s Causeway are around 50 to 60 million years old, created during the geologic period immediately following the mass extinction of dinosaurs. During this time, the North Atlantic experienced heavy volcanic activity, and the molten lava that erupted and cooled formed a vast basalt rock bed known as the Thulean Plateau. Later, that plateau broke apart, with remnants of it existing today in the areas now known as Northern Ireland, Scotland, the Faroe Islands, Iceland, Greenland and Norway. 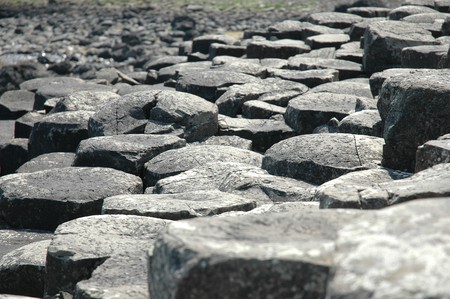 What makes the Giant’s Causeway particularly interesting is its symmetry – the majority of its tall, pillar-like columns are hexagonal, their sides fitting perfectly into one another like a puzzle. For years the reason for this oddly ordered appearance remained a mystery, but recently scientists at the Dresden University of Technology discovered an answer, determining that some basalt tends to form hexagonal patterns as a result of the rate at which it cools. According to their model, columnar basalt cools slowly, and when the cooling occurs at an even rate across a large area, it results in unusually ordered fracturing in the rock sheet, producing remarkably consistent columns like those seen at The Giant’s Causeway. 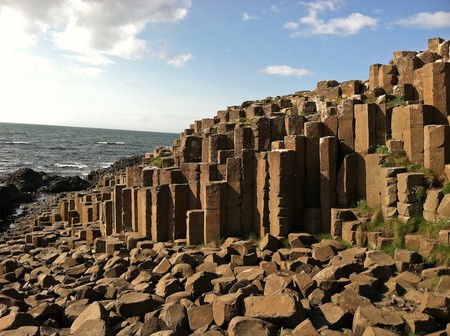 Still, the National Trust for Places of Historic Interest or Natural Beauty – the conservation organisation that now owns and manages the Giant’s Causeway – continues to play up the Fionn mac Cumhaill myth with marketing like the video below. And science’s debunking of the legend and demystifying the reasons for the Causeway’s unusual appearance hasn’t dampened visitor enthusiasm; if anything quite the opposite. This year, the geological marvel that some consider the eighth wonder of the world overtook Titanic Belfast – the world’s largest Titanic exhibition – as Northern Ireland’s most visited tourist attraction.