Northern Ireland’s Antrim coast is one of the most scenic drives in Europe, its stunning landscapes recognised by the makers of Game of Thrones, who used the area extensively as one of their filming locations. Darren McLoughlin of Panoramic Ireland reveals the power and beauty of Northern Ireland’s Antrim coast and spots some of the most iconic Game of Thrones locations. 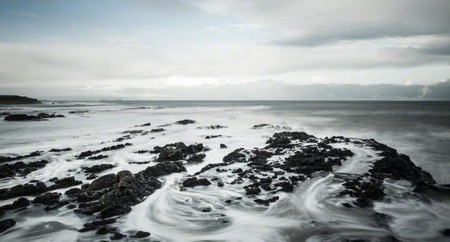 For centuries the scenery of Northern Ireland has been entertaining and inspiring visitors and locals alike, from Thackeray (author of Vanity Fair) who referred to the Glens of Antrim as ‘Switzerland in miniature’, to CS Lewis whose love of the Mourne Mountains was the inspiration for Narnia. The three decades-long conflict known as ‘The Troubles’ did much to dampen tourism in Northern Ireland during the 1970s, 80s and 90s, but with the success of HBO’s Game of Thrones comes the positive portrayal of this northwest corner of Europe as one of outstanding landscapes and scenery.

There are two great journeys through Northern Ireland’s main locations for Game of Thrones. The first is to start in Belfast and head north along the Antrim coast. This trip can be done in a day at a rush or preferably in two days with plenty of time to stop and admire the views. The second journey is to travel south to the Mourne Mountains and County Down. Both make for a great long weekend’s sightseeing; here is the first instalment of a Game of Thrones tour through the Northern Irish countryside. 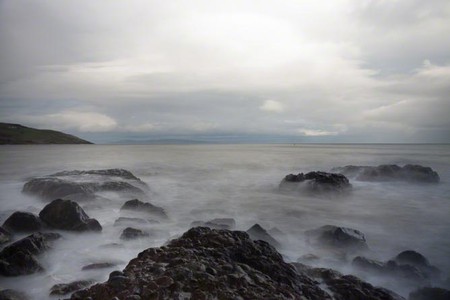 Belfast’s Titanic Quarter, where the eponymous ship was built and launched, is home to the studios where much of the set work of Game of Thrones is filmed and post production carried out.

From Belfast the A2 road north to Larne is scenic, following the shoreline of Belfast Lough; while it is not used in the filming of Game of Thrones, the large 12th century stone castle jutting into Belfast Lough at Carrickfergus is one of the most impressive Anglo-Norman castles in Ireland. Further along the coast, a few miles south of Larne, the massive disused limestone quarry at Magheramorne was used as the setting for Castle Black and the Wall of Westeros. This huge site is currently inaccessible, awaiting redevelopment as a mountain biking and diving centre.

Heading north through the port town of Larne the true scenery of the Antrim Coast begins. Near Cairncastle, high up on the edge of the Antrim Plateau, the hilltop here is home to a promontory fort that was an important flint mine dating back 4,000 years. Channel 4’s Time Team excavated the site and found evidence of an ancient town fortified with a gate house and massive defensive earthworks; a place that must have borne witness to a few battles and was the scene of the beheading of a Night’s Watch deserter in Season 1.

From this viewpoint there are now two options for your journey. Either continue inland to Slemish, the mountain where Saint Patrick, the patron saint of Ireland spent six years as a slave before escaping back to Britain, and which served as the setting of a Dothraki camp, known in these parts as Shillinavogy. Preferably, head back to the sea to follow the Antrim Coast Road once again.

The Antrim Coast Road was completed in 1842 and is one of the world’s great scenic drives. By the time you have travelled as far as the pretty village of Glenarm, the first of the famous ‘Nine Glens of Antrim’ it will be obvious as to why this should be considered a scenic drive. 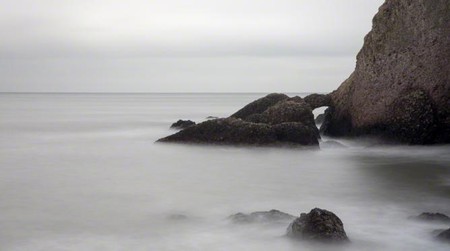 Passing north through Glenarm, whose name in Irish means ‘Valley of the Army’, and the small harbour of Carnlough, take in the changing scenery, often affording vistas of the Scottish mainland, before arriving at the pretty village of Cushendun. By now you will have passed through the ‘Valley of the Sword’ and ‘Valley of the Dead’ or ‘Slaughtered’ – places whose very names could easily be found in G.R.R. Martin’s epic tale.

Cushendun, designed by Clough Williams-Ellis (architect of Portmeirion) is home to the Storm’s End caves where Melisandre gave birth to a shadow baby after being rowed ashore. Following the path past the old hotel will lead you to the Storm’s End caves; composed of pebbles embedded in old red sandstone eroded from the Scottish Highlands millions of years ago. These caves covered with moss have a feel of being a portal to another realm.

From Cushendun a narrow coastal road will take you to Murlough Bay, a secluded section of coastline now owned, like a lot of the Antrim Coast, by the National Trust and used in filming. If you have plenty of time this journey is well worthwhile but will take a few hours to explore properly. Alternatively, take the scenic road up the Glendun valley, heading for the Dark Hedges – an avenue of 200-year-old beech trees where Arya Stark escaped. The Dark Hedges are located close to the village of Armoy on Bregagh Road and are one of the must-sees of any visit to this corner of Ireland. 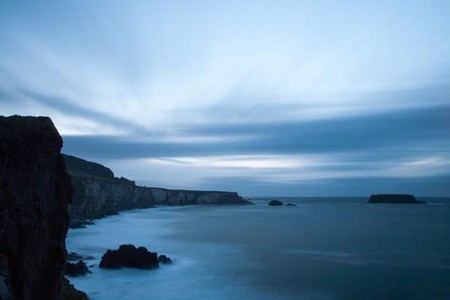 From Armoy, Ballinlea Road will take you back to the coast close to the village and harbour of Ballintoy. Just outside Ballintoy is Larrybane and the Carrick-a-Rede rope bridge, one of the longstanding points of interest on the Northern Ireland tourist trail. Game of Thrones fans may well be more interested in the car park as in the rope bridge.

Larrybane is a former quarry, now used for parking and several key scenes have been filmed here including Renly’s camp in Season 2 and the fight between Brienne and Loras. The white cliffs create a natural backdrop and with views offshore to Sheep Island and Rathlin, Northern Ireland’s largest island, this surely ranks as one of the most scenically situated car parks in Ireland. It is well worth the walk to the rope bridge with outstanding views from every part of the path. If you don’t have a head for heights you can watch the brave tourists who cross the suspended bridge 23 metres above the sea, originally used by fishermen to access the island.

Staying the night in the nearby village of Ballintoy is a good option, there are plenty of places to stay including a hostel, self catering, B&B and an inn. 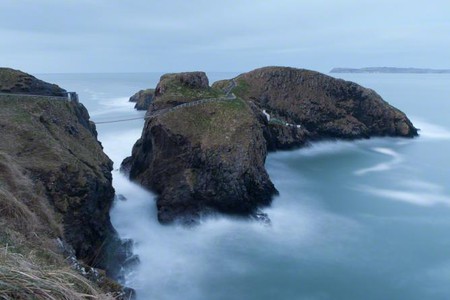 Heading west from Ballintoy turn down to the harbour to find one of the prettiest stretches of coast in Ireland. The rocky coastline provides the backdrop to Lordsport in the Iron Islands.

Further west along the coast little-known Dunseverick was also the setting for more Game of Thrones filming locations. The ruins of the small castle sit on a promontory, while the easily passed lane to the small harbour leads to more stunning coastal scenery. 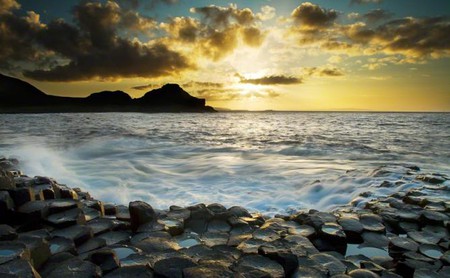 It would probably be foolish, actually it would be almost impossible, not to visit the Giant’s Causeway, the UNESCO-listed World Heritage Site first documented in 1693 and a tourist attraction ever since. 60 million years ago during a period of intense volcanic activity, the Antrim Plateau was created and magma cooled quickly as it met the sea forming more than 40,000 hexagonal, octagonal and other columns. Myth attributes the causeway to the giant Finn MacCool who built it as an access route across to Scotland to fight with a rival giant. Similar geological features also exist on the Scottish island of Staffa.

And then onto breathtaking Dunluce Castle. Now ruined and occupying the whole of a narrow promontory right over the sea with crashing waves below, it bears more than a passing resemblance to Castle Pyke. Located just off the A2 between Bushmills and Portrush it is an essential and unmissable part of the journey. Most of the extant remains date from the early 16th century. The castle was constantly fought over by various clans and was surrounded by a planned town before becoming disused after a section fell into the sea in the mid-17th century. 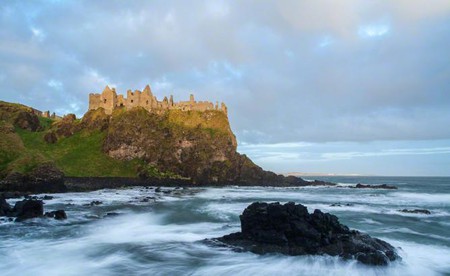 Continue along the A2 to reach Castlerock and just beyond it lies the Dragonstone beach where the Burning of the Seven took place. High above the cliff sits Mussenden Temple, one of the most photographed of Northern Ireland’s buildings, modelled on a Roman temple it was built by the Bishop of Derry in 1785.

Those so inclined to continue G.R.R. Martin’s epic could head southwest from here to Co. Fermanagh and the beautiful Pollnagollum cave that stretches for ten miles underground. Fed by a waterfall that flows over a cliff edge at the entrance, this spectacular cave was used as an outlaw hideout in Game of Thrones Season 3.

Darren is an Irish professional photographer specialising in art, product, architectural and travel/tourism photography. His company Panoramic Ireland run one-to-one and small group photography tours and workshops in Dublin and across Ireland. To find out more please visit www.panoramicireland.com.