A 'Game of Thrones' Tour of Northern Ireland

It’s no secret that Game of Thrones, HBO’s hit TV show (if you haven’t heard), uses the beautiful countryside and coast of Northern Ireland to bring life to the fantasy world of Westeros. Major story lines, castle exteriors and beaches have become symbiotic with the home of the Starks (how many are left again?), Greyjoys and royal bloodlines of Westeros. Check out this ultimate guide to ‘Thrones filming locations in Northern Ireland.

Game of Thrones in Northern Ireland

Since its makers discovered the rare natural sites and castle ruins that were unseen anywhere in Europe, including the UNESCO-listed Giant’s Causeway, Game of Thrones has called Northern Ireland home since the beginning of the series. While the Northern Ireland crew set their base at the Titanic Studios in Belfast’s Titanic Quarter, many scenes are filmed at the Antrim and Derry coast, along the rocky beaches of Portrush and Downhill Strand. The show, since it began production and filming in 2010, is gradually transforming the tourism industry in the North – most private and public tours will include ‘Thrones experience tours, and thousands of tourists have flocked to the shore to experience Westeros for themselves.

The seven-mile (11.3-kilometre) coast of Downhill Strand is the location set for Stannis Baratheon and his enchanting mistress, Melisandre, throughout the earlier seasons of the show. Sitting atop the rocky cliffs, Mussenden Temple may look out of place architecturally as it was originally modelled on a Roman Temple in 1785. The Strand is also the home of Dragonstone Temple, belonging to House Baratheon in season one, which is computer generated in its entirety and makes use of the backdrop on this Northern coast. Further scenes for the Stannis’ plot line were filmed across different points of the coast, including the caves of Cushendun, where Melisandre gave birth to the shadow demon. 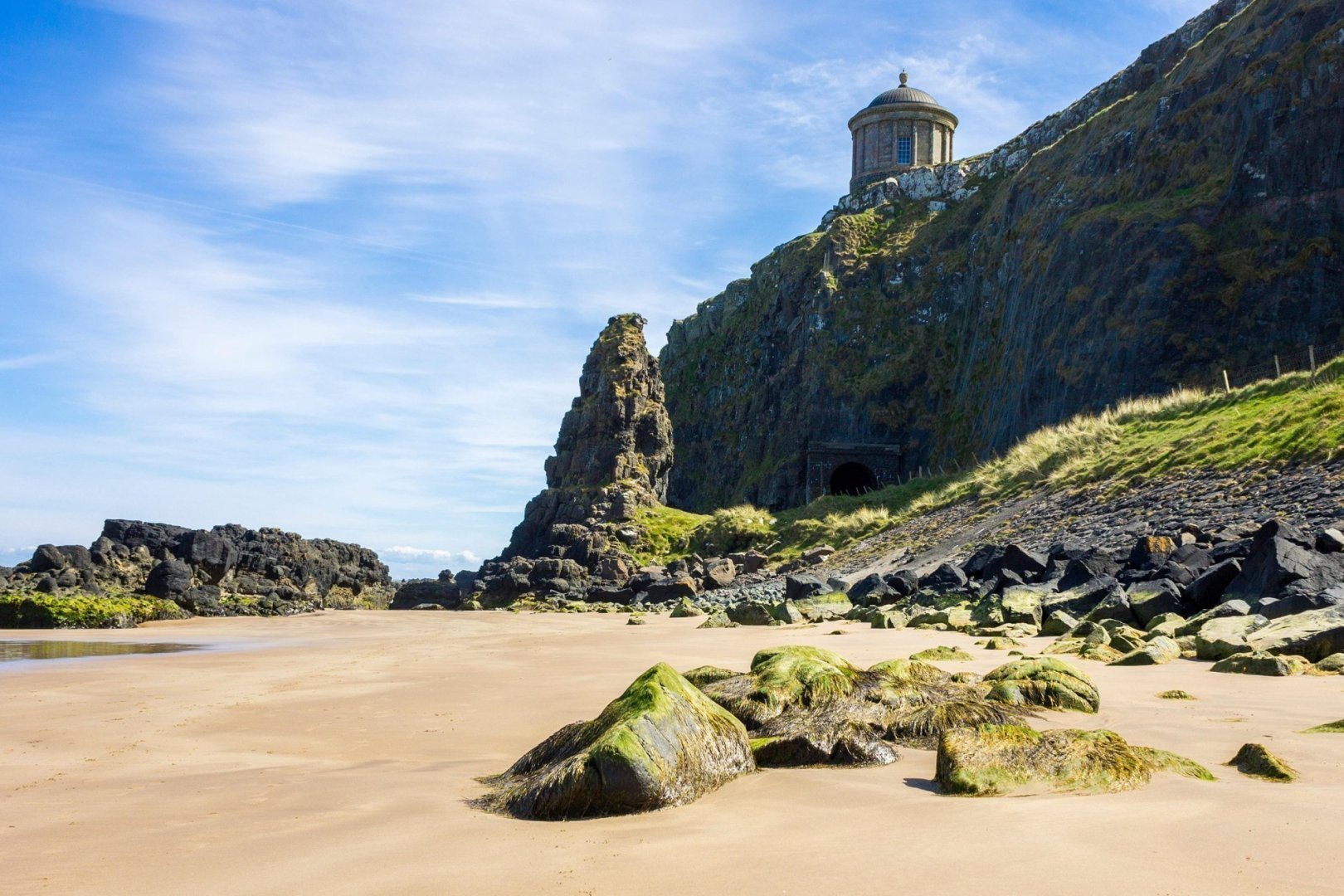 These 16th-century castle ruins are visible in season one in the Stark kingdom of Winterfell, north of King’s Landing. The ruins of Castle Ward bring the Winterfell castle and courtyard to life, while the castle you see on-screen is a mixture of ruins and computer generated walls, turning it into the grand Stark household, fit for the royal family. The location overlooks Strangford Lough, and it was also the set for Bran Stark’s plot line in season one, including his archery training scenes, which took place inside the 18th-century farmyard. The nearby location of Audley’s Field also housed Rob Stark’s army during their preparation for battle with the Lannister army.

Tucked away in the Mourne Mountains, Spelga Dam is popular for local fishermen and production crews alike. From this viewpoint, you’ll get a complete view of the Area of Outstanding Natural Beauty-listed mountains. Four months of filming for the latest season took place at Spelga Dam, shrouding this location in secrecy as fans anticipate the late-arrival of season seven, the penultimate season of the show.

The crew uses the sandy beach of Portstewart Strand for footage of Dorne in more recent seasons of Game of Thrones. While the crew travels out to more exotic locations, including Croatia, the lengthy strand of coastal town Portstewart was perfect to create the sandy hills of Dorne – which drew in quite a bit of attention from locals throughout filming season. Viewers will spot Bronn and Jaime Lannister along the strand in early episodes of season five. 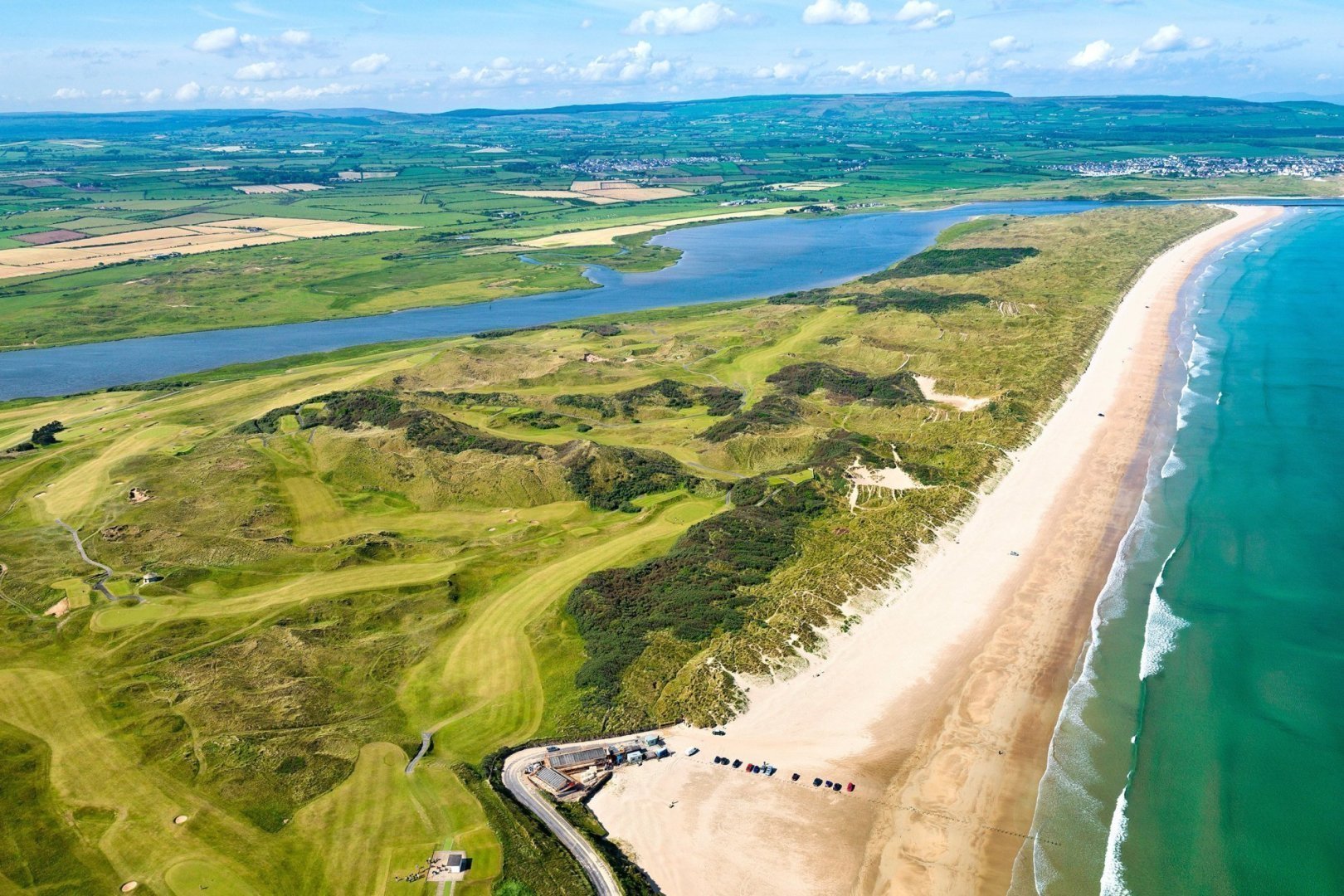 Ballintoy Harbour and beach is the location of Pyke, the coastal capital of the Iron Islands, belonging to the Greyjoy family. This entire village is transformed into Pyke and Lordsport Harbour during season two, where Theon and Yara fight for their royal bloodline. The quaint fishing docks of Ballintoy bay are recognisable as the place where Theon finally arrives home to the Iron Islands. The Greyjoy family also occupy areas of Carrick-a-Rede, where you can cross Northern Ireland’s famous rope bridge. The Larrybane Quarry and carpark outside Carrick-a-Rede were filming locations during season two when Theon summons the Iron Islanders to support Yara Greyjoy’s claim to the Salt Throne.

The rare serpentine beech trees near Armoy, colloquially named The Dark Hedges, are the backdrop to many a Game of Thrones scene, including the finale of season two when Arya escapes King’s Landing. Against a dusk backdrop, these 300-year-old trees bring the King’s Road to life – one of the best location sets of the entire show. Not only does Westeros bring a little mystery to this beech tree avenue, but Irish folklore suggests that a female ghost, The Grey Lady, roams the trees every night. 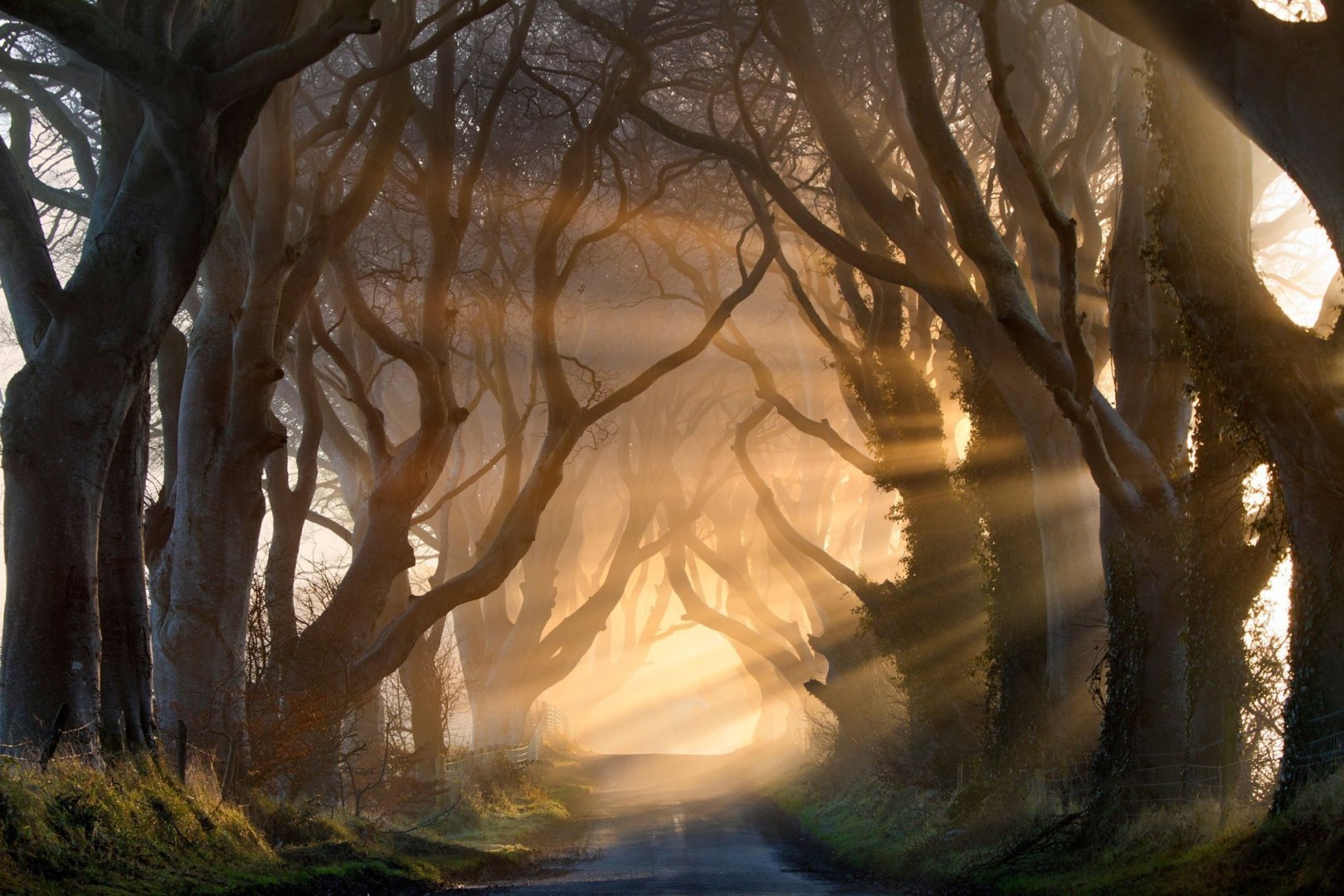 The talented filmmakers at HBO transform Dunluce Castle into House Greyjoy, situated in the capital of the Iron Islands. The castle itself has a complicated history, including several infamous owners and ties to the Spanish Armada. The mounted cannons on the exterior walls came from La Girona, the Spanish Armada ship which sunk near the Giant’s Causeway. In 2003, for his film The Medallion, Jackie Chan filmed several scenes at the castle. The medieval castle has drawn international attention from artists and locations scouts alike – its characteristic rocky cliffs make it the perfect site for House Greyjoy and the cloudy Iron Islands.

Within the borders of Gosford Forest Park lies this charming Norman castle, the actual set for House Tully’s Riverrun Castle. The castle itself is still perfectly preserved, making it one of the most complete sets in the entire show – and a wonderful location to visit. Since the beginning of production in 2010, Northern Ireland’s forests have been popular with location scouts; the crew filmed season one’s Haunted Forest in Tollymore Forest Park, where the Night’s Watch encountered the terrifying White Walkers in episode one.