8 Reasons Why You Should Visit Ballintoy Harbour in Northern Ireland 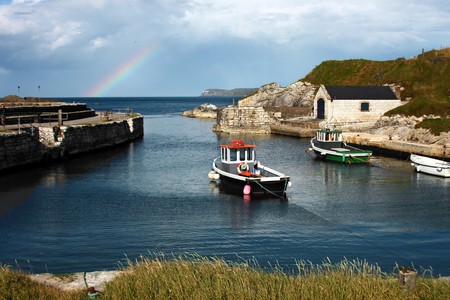 The quaint dockland town of Ballintoy may have a small population – 165 people were recorded as residents in the latest census – but it continues to attract many curious tourists and TV location scouts around the world. From the amazing views of the Northern Coast to the long stretches of sandy dunes, here’s why you should add it to your holiday list this summer.

The harbour is a photographer’s dream

Ballintoy Harbour, meaning ‘Town of the North’, is built with limestone blocks in a roughly triangular shape at the edge of Ballintoy town. No matter the weather, the crowd of small boats and surrounding rocks make for a fantastic photo of the Northern Irish coast, which extends to Ballycastle on one side and Whitepark Bay on the other. 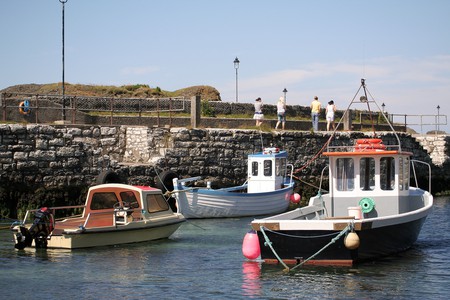 It appears on HBO’s Game of Thrones

You might recognise this harbour (albeit in foggy weather) as the docks of the Greyjoy Kingdom of Pyke, in the fictional Iron Islands of Westeros. Since the show began filming Season 2, Ballintoy has been a popular backdrop for the Greyjoy storyline, and the Game of Thrones cast and crew don’t plan on leaving Northern Ireland’s coast quite yet; they are currently filming Season 7 in Spelga Dam.

It’s home to the most beautiful church in Ireland

Ballintoy Church, pictured below, is the most recognisable religious building in the area, which owes its unusually Latin appearance to a hurricane in 1894, which removed the steeple at the top of the church tower. The church was originally built, as believed, to serve the nearby Ballintoy Castle. The building has a unique sundial mounted on the west wall, allegedly used to record tidal waves since 1817, although there is no agreed upon date of the church’s construction. 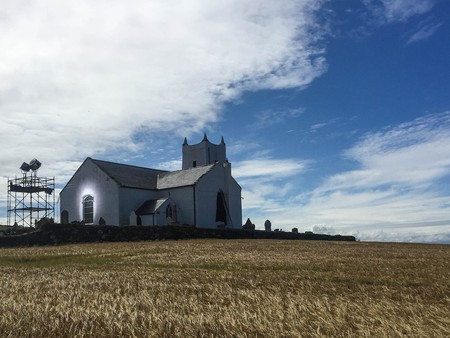 View of one of Ballintoy’s churches | © Chris Brooks / Flickr

North Antrim is replete with Atlantic wildlife, from birds of prey to dolphin populations, which extends into the beautiful townland of Ballintoy Demesne. These 505 acres of land are home to many species of wildlife, which are most concentrated in the coastal region of Northern Ireland. The National Trust protects the area and cares for animals under Whitepark Bay, including significant populations of butterflies and birds.

You’ll get a 180-degree view of the surrounding coast

The harbour extends to Sheep Island with a further reef to Larrybane, the perfect arrangement for a professional photo junkie. The popular walk from Whitepark to Ballintoy has some fantastic sights to explore; the rock formations between the two are colloquially known as ‘The Park End’ and attract some of Ireland’s most ferocious waves, given their shape and positioning. 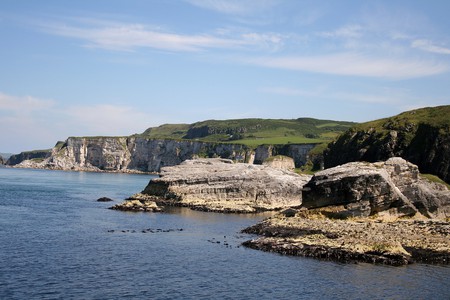 It’s close to the Giant’s Causeway

Ballintoy is a short 13-minute drive from Northern Ireland’s UNESCO-listed Giant’s Causeway, a beautiful formation of 40,000 basalt rocks that has drawn tourists from around the world to the shores of this small region for over a century. While we recommend you tour the entire Causeway Coast, the short trip to the Causeway formation is well worth the coastal drive you can enjoy along the way. The trip also features a popular hiking trail, which stops at the most popular points of the Causeway Coast. You can find the route here.

It’s quiet (except during the summer months)

Imagine a quiet afternoon on this harbour, with a book in one hand and a summer drink in the other – you couldn’t be more relaxed. Ballintoy, with both a small population and a lot of surrounding water and greenery, is a perfect escape from our modern hectic lives. But be aware: this harbour has attracted a larger crowd since it appeared on one of the world’s most beloved shows, Game of Thrones, causing the small car parks and picnic benches to become heavily populated. If you plan to travel to Ballintoy Demesne, plan ahead and book your transport early, or make it on time to park your vehicle and enjoy the day without worries! 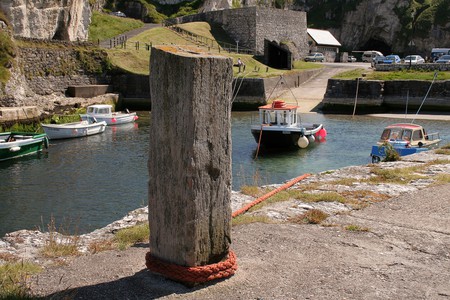 It’s a step back in time

Ballintoy Harbour has a rich history affixed to it, and to this day, it is a respected fishing and trade post. While exploring the maritime culture celebrated here, you will feel as though you have taken a true step back in time through Northern Ireland’s past. The aesthetic matches that of the hobbit homeland of The Shire – a stunning array of rocky shores, quaint hills and village shops that delight the travellers who visit. If you are travelling to the coast this year, be sure to save this stunning destination to your maps!