Carrick-a-Rede Rope Bridge | Courtesy of Tourism NI
The Causeway Coastal Route is Northern Ireland’s best road trip, and probably one of the best in the world. Starting in Belfast and finishing in Derry (or vice versa), the route passes some of Europe’s most remarkable sights, both man-made and natural. What’s more, it follows the Atlantic coastline, so it’s brimming with beaches, cliffs, and phenomenal views. Here’s our list of the best stopping points along the way. It assumes you’re starting in Belfast, so if you’re departing from Derry, just read the list backwards!

The Gobbins Cliff Path first opened to the public in the early 20th century. At the time, it was a marvel of engineering and attracted visitors on the strength of its design as well as the cliff views. Unfortunately, it fell into disrepair over the years and had to close. Now, though, after an extensive renovation and reimagining, the tubular path is once again a marvel. 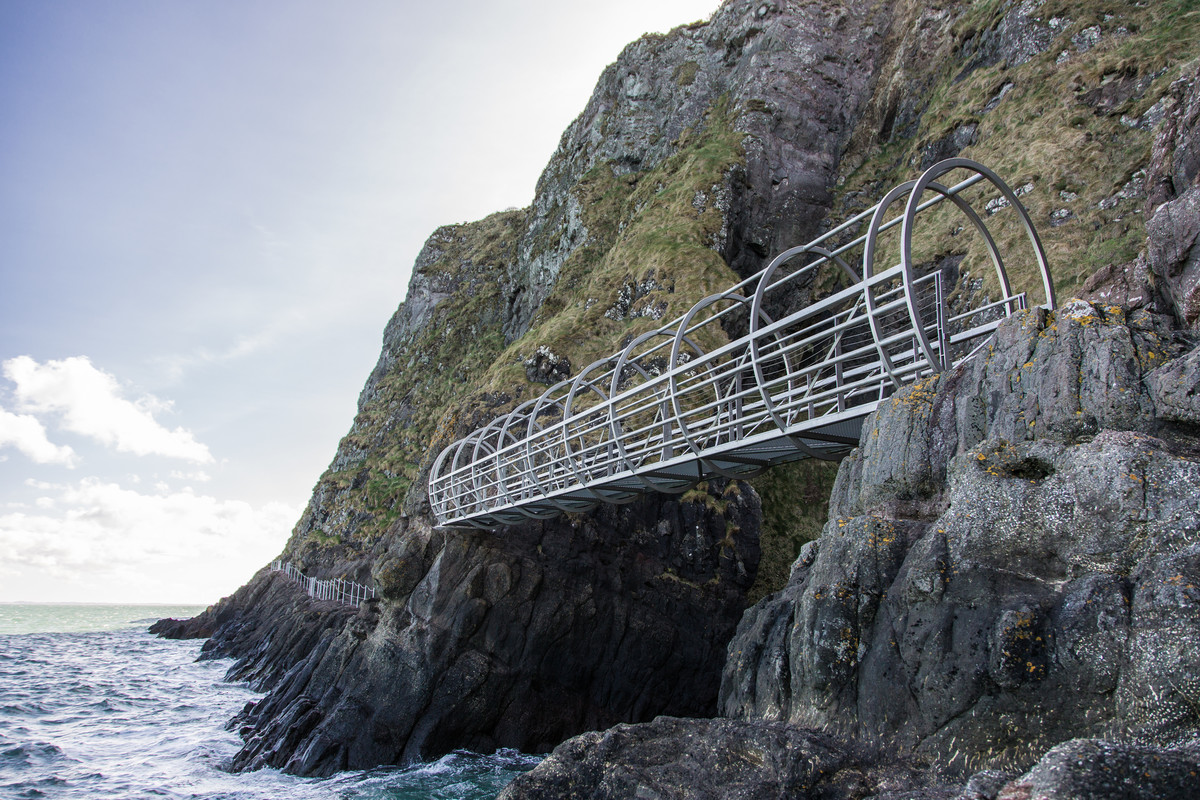 Glenarm is one of Northern Ireland’s oldest estates, and there’s been a castle on the grounds since the 13th century. The current castle, built in 1636, opened to the public in 2005. The walled garden contains water features, vegetable gardens, and, of course, flowers. The walled garden and tea room open to the public every April, closing in mid-October, and the castle itself is open on select dates. The castle shop provides a range of ladies’ and gents’ fashions, and may well be the perfect place to pick up a souvenir. 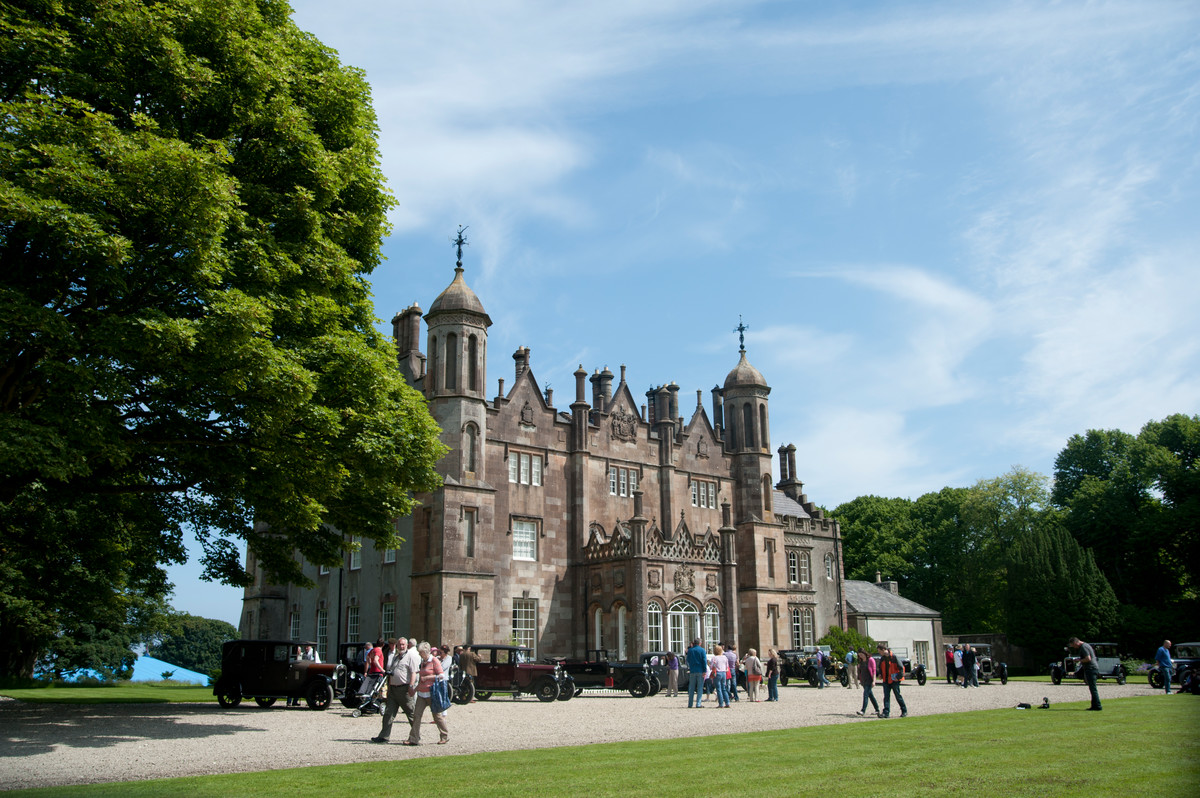 The Glens of Antrim

Glentaisie, Glenshesk, Glendun, Glencorp, Glenaan, Glenballyeamon, Glenariff, Glencloy, and Glenarm make up the nine Glens of Antrim. Each glen has its own scenic drive, and Glenariff (sometimes known as ‘the Queen of the Glens’) has a forest walk that is, frankly, unmissable. It passes through a National Nature Reserve, and its three miles (4.8 kilometres) of forest walk offer riverside paths, waterfalls, and even the Laragh Lodge Restaurant for weary travellers. 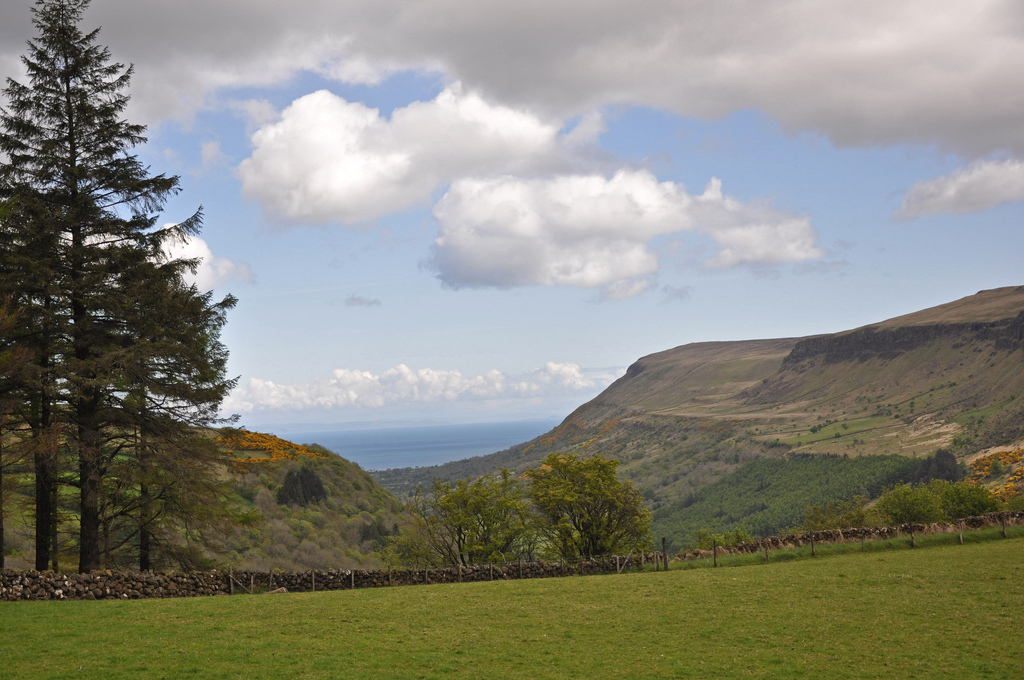 Cushendun, designed for Ronald McNeill (later Lord Cushendun) by the noted architect Clough William-Ellis, is a tiny coastal village sitting in Glendun, one of the previously mentioned Glens of Antrim. Working to create something reminiscent of Cornish villages, William-Ellis designed the village hall, many of the homes, and a public hall that was never completed. The National Trust now owns most of the village, and its population has yet to exceed 200. It’s a perfect, tiny seaside retreat! 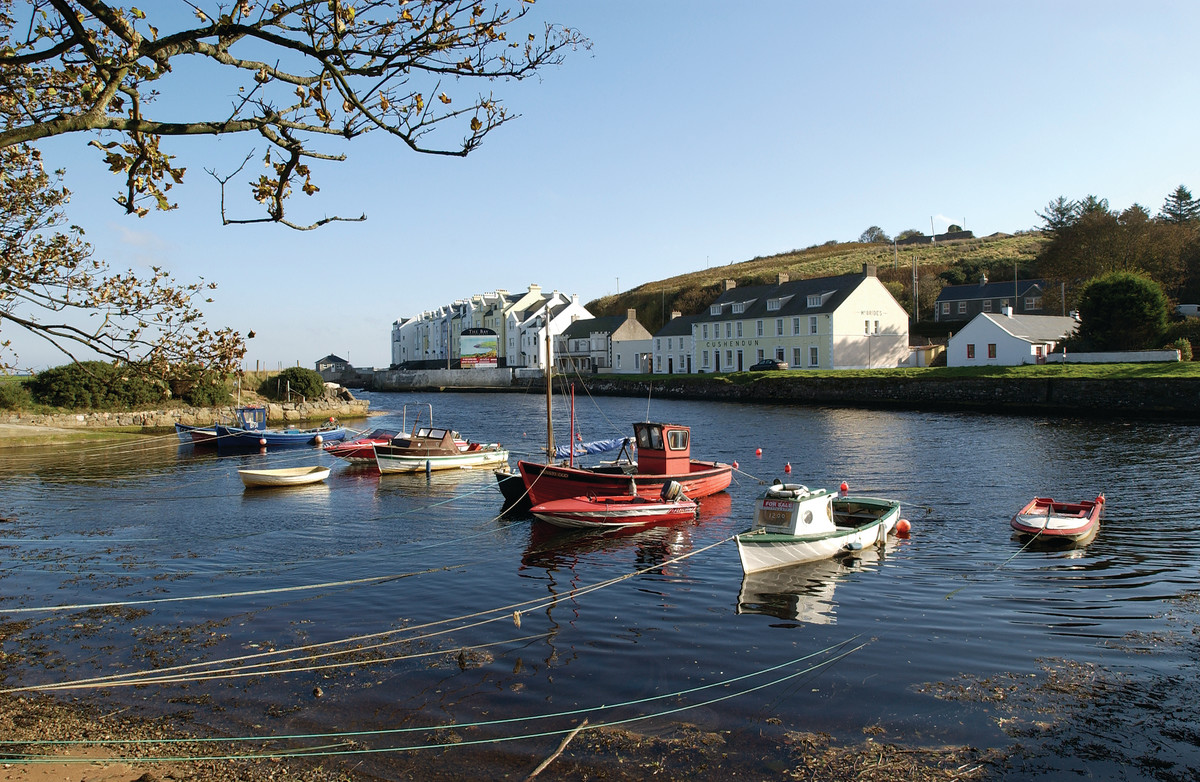 This avenue of beech trees became famous after HBO’s Game of Thrones featured them as The King’s Road. Given their fame and striking, almost imposing atmosphere, it might be surprising that The Dark Hedges is essentially a driveway! Built as a feature approach for Gracehill House, they’ve now become an attraction in their own right, arguably eclipsing the house in terms of popularity. 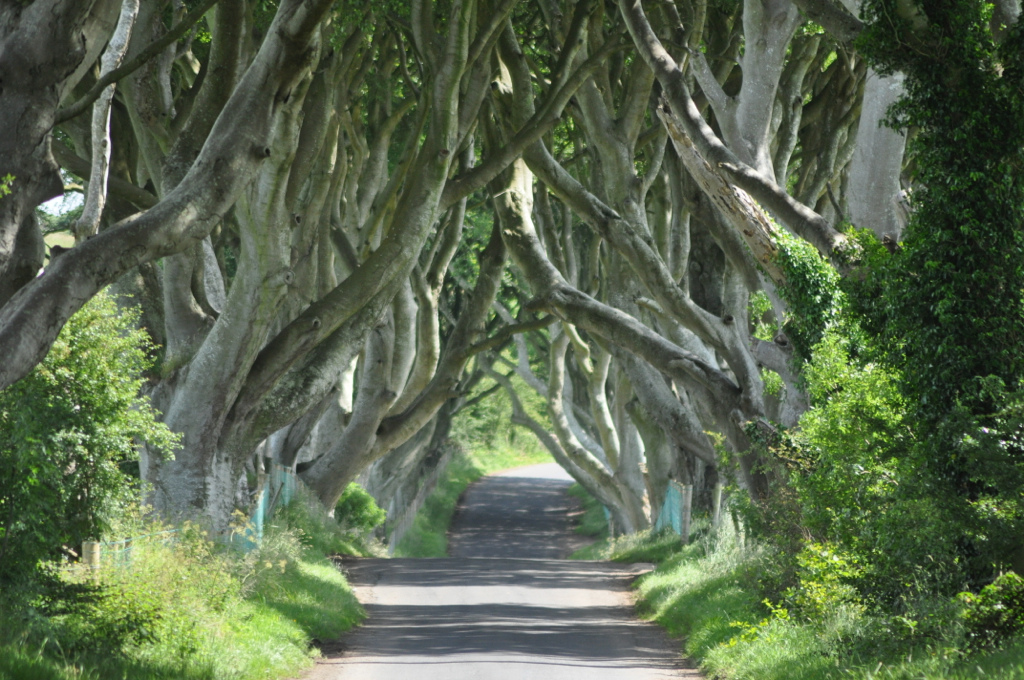 You may want to dedicate an entire day of your road trip to Rathlin Island. Catch the ferry from Ballycastle, and then spend a day exploring the island’s cliff walks and quiet trails. The island attracts tourists not only for its lighthouse, seal colonies, and stunning views but also for a more unexpected reason: its birds. Rathlin is home to a large seabird population, particularly puffins, and it draws birders from miles around. The recently refurbished RSPB seabird centre is open to the public and also offers tours of the island’s lighthouse. 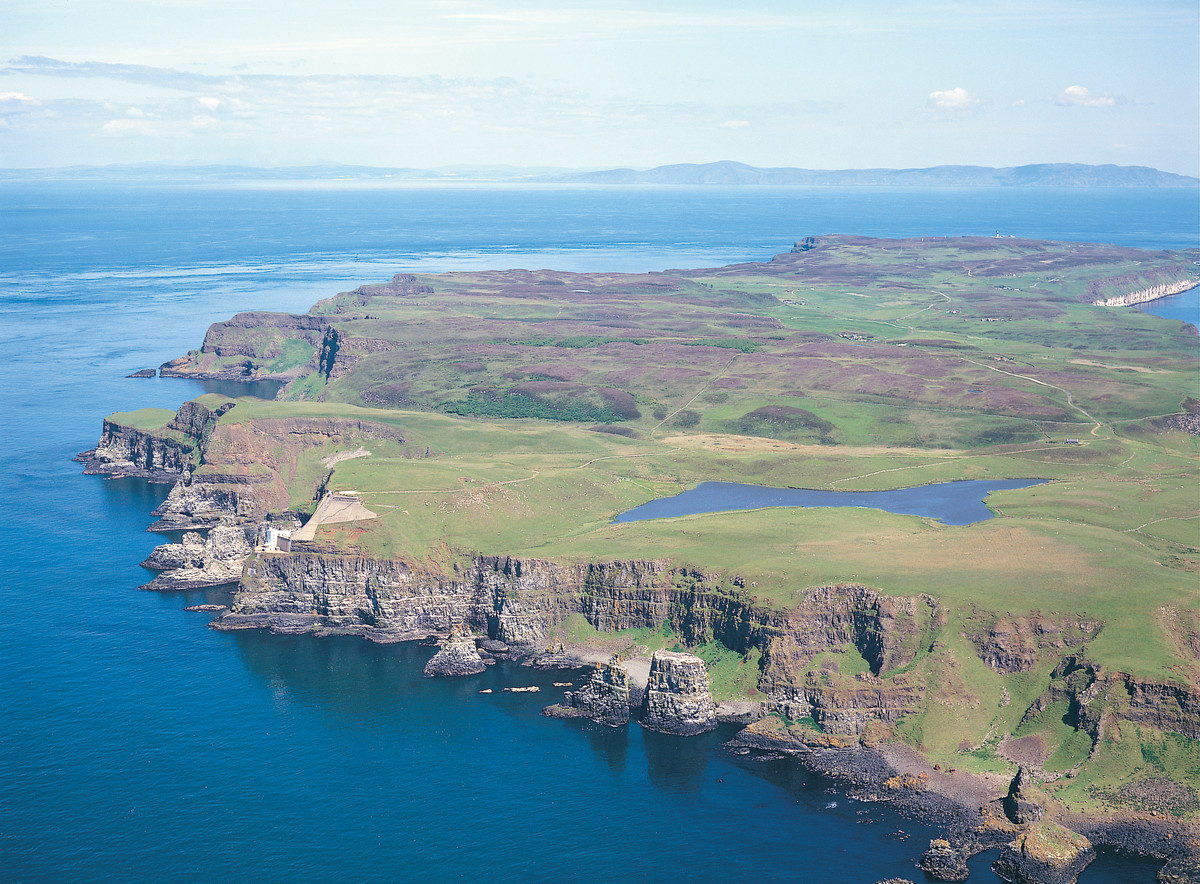 Carrick-a-Rede is a tiny island off the coast of County Antrim. It’s so tiny, in fact, that it contains only one building, a fisherman’s cottage. Although the island is beautiful and well worth visiting, the real attraction is the bridge to the island. Suspended 100 feet (30 metres) above the waters below, the bridge, originally erected by salmon fishermen, now sees thousands upon thousands of visitors every year, every one of them eager to brave the rope bridge. 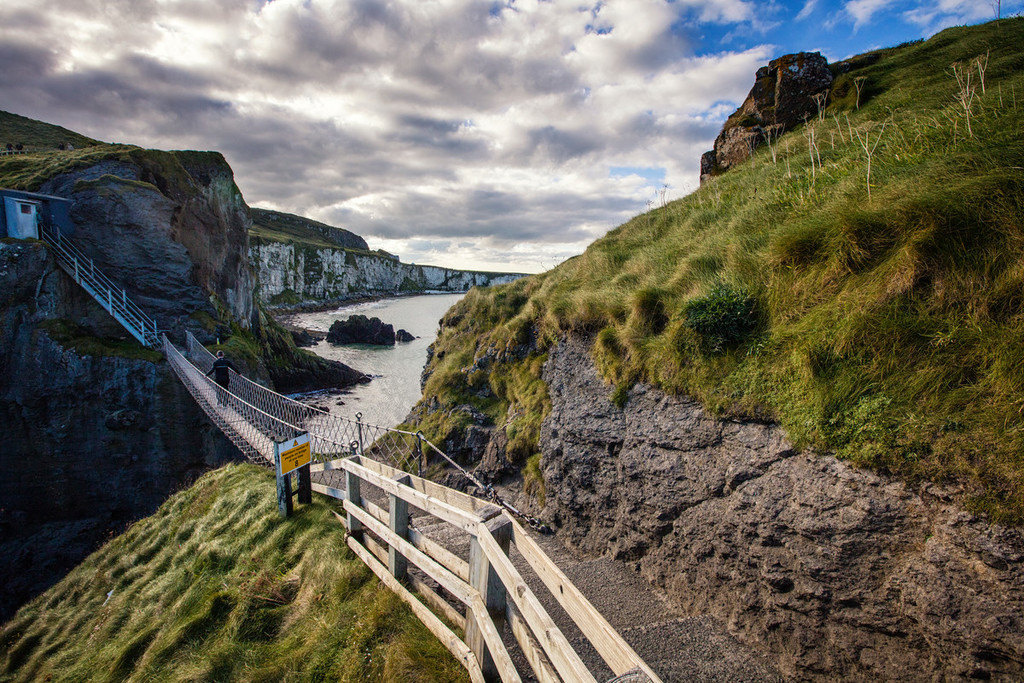 This one goes without saying, given that we’re talking about The Causeway Coastal Route, but with all the other things to see, it’s an important location to remember. A UNESCO World Heritage Site and Area of Outstanding Natural Beauty, the Giant’s Causeway is composed of 40,000 natural basalt columns, formed by a volcanic eruption. The visitor’s centre explains the myth behind the causeway, which looms large in Irish legend. As well as the columns, the causeway area contains other stone formations, including the interestingly named Giant’s Boot, Wishing Chair, and Granny. 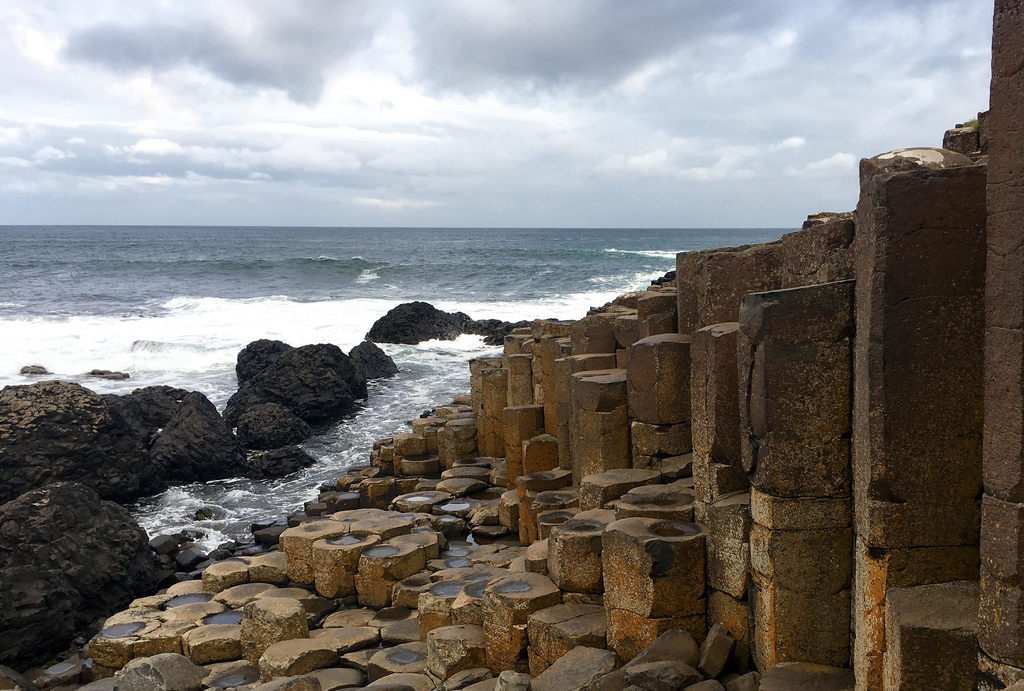 Distillery
Old Bushmills Distillery | Courtesy of Tourism NI
Bushmills Distillery is the oldest operating whiskey distillery in Ireland. In 1608, King James I granted a distillation licence to the adventurer Sir Thomas Phillips. The Bushmills brand specifically was established in 1784, and after various periods of non-operation, it re-opened in 1885 and has operated uninterrupted since then. Now, the distillery offers tours and tasting experiences for anyone who wants to know more about whiskey or Bushmills’ heritage.
More Info
Open In Google Maps
2 Distillery Road, Bushmills, Northern Ireland, BT57 8XH, United Kingdom
+442820733218
View menu
Visit website
Visit Facebook page
Send an Email
Give us feedback

Dunluce Castle is a stunning cliffside ruin, surrounded on three sides by steep drops. In fact, it’s technically surrounded on all fours sides, as it actually sits on an outcropping, accessible via a bridge connecting the rocks to the mainland. The castle has inspired artists ranging from C. S. Lewis to Led Zeppelin, and eagle-eyed TV buffs might notice striking similarities with Pyke, the seat of House Greyjoy on Game of Thrones. 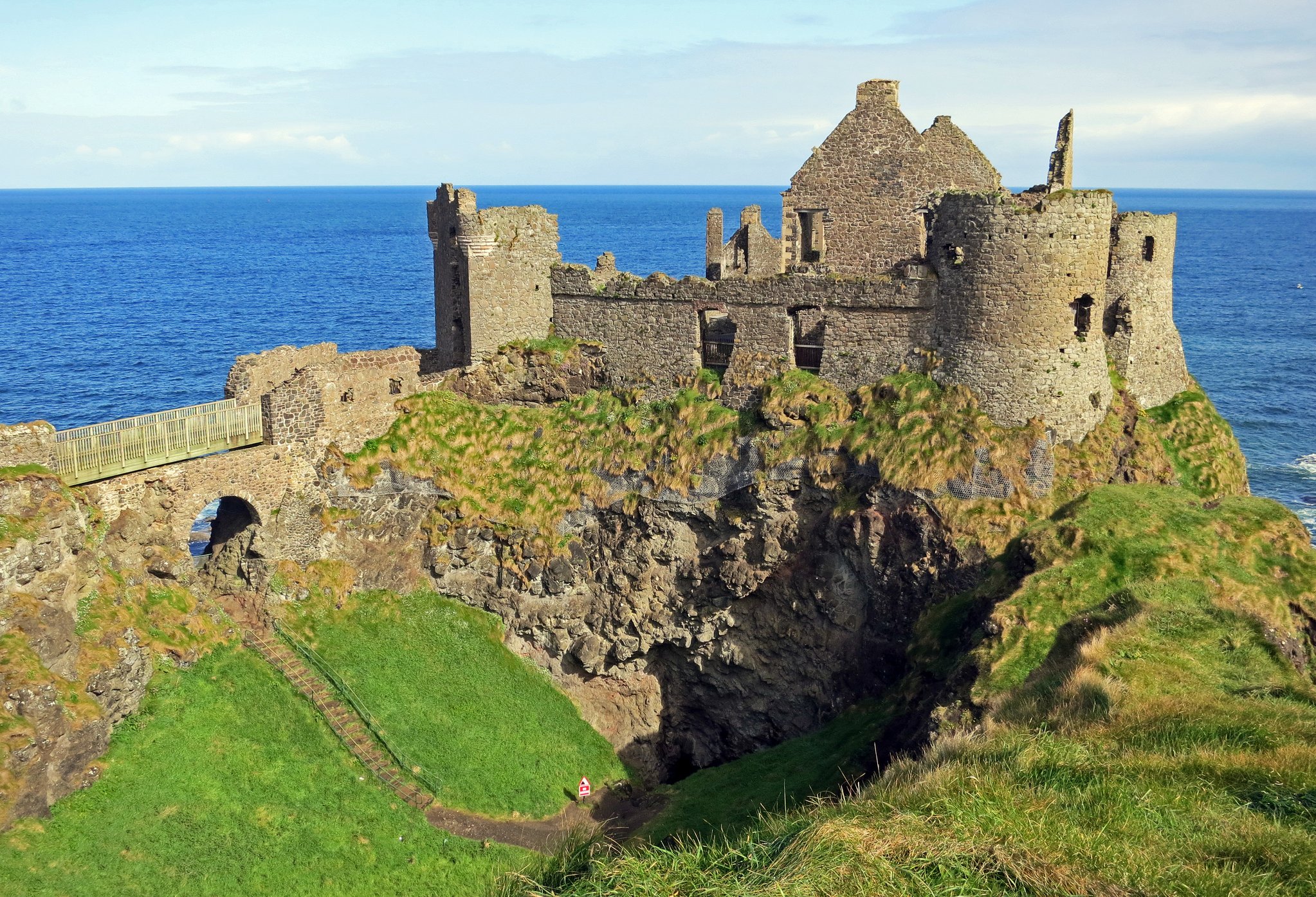 Located on the edge of Limavady, this park is a perfect tranquil rest stop before ending your journey. The park has a specially curated path designed to showcase the forest’s wildlife. The museum and countryside centre lends a little bit of historical context to the locality and explains the reasoning behind the ‘Leap of the Dog’ sculpture in the park. The nearby town of Limavady gets its name from the Irish Léim a’ Mhadaidh, meaning – you guessed it – ‘Leap of the Dog’. 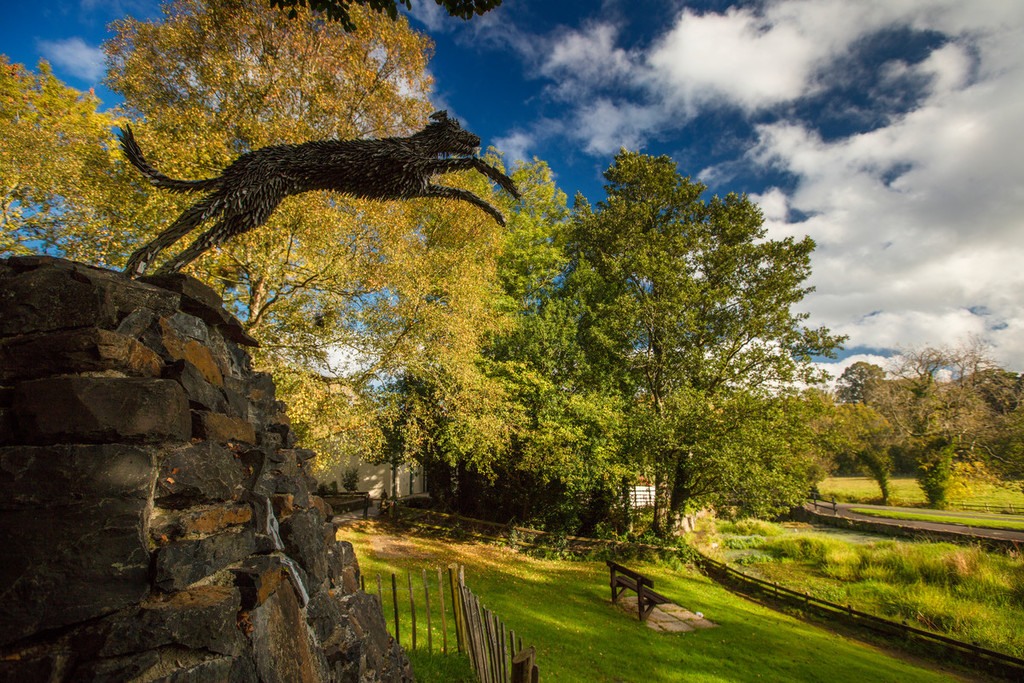 The Leap of the Dog Sculpture | Courtesy of Tourism NI